Mother, 29, says she was left with ‘lips like a baboon’s bum’ after an allergic reaction

A mother has claimed her lips were left looking like a ‘baboon’s bum’ after she suffered an allergic reaction to fillers which was so severe that swelling ‘closed her airways’ and made it difficult for her to breathe.

Lauren Evens, from Chester, Cheshire, had her filler topped up last week but an hour later her lips began to swell until they eventually became so ‘huge’ that she dashed to A&E at the Countess of Chester that evening.

The 29-year-old was given antihistamines but the swelling became so severe that she could no longer talk and her ‘airways started to close’, so she was rushed into resus and given adrenaline.

After a painful and terrifying experience, the beauty therapist trainee, who has been having filler for the past four years, is keen to raise awareness that such allergies can develop at any time.

Lauren Evens, from Chester, Cheshire,  has claimed her lips were left looking like a ‘baboon’s bum’ after she suffered an allergic reaction to fillers which was so severe that swelling ‘closed her airways’ and made it difficult for her to breathe 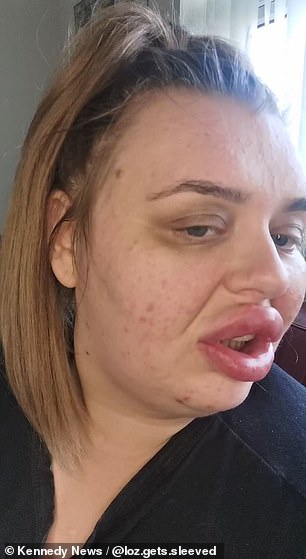 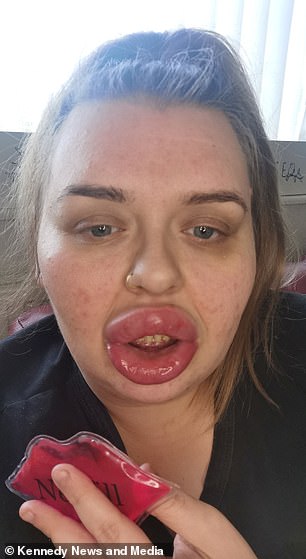 In a clip which later went viral on TikTok, the beauty lover unveiled her huge lips, which she said were six times the size of her usual pout

The beauty lover said that she’d have her lip filler refilled around every six months, and topped them up with just under one ml this time around.

Lauren said: ‘I had the lip cream on and she [beautician] did them and they were fine but about an hour later they started to swell up and they went huge.’

The beautician said that within four hours of having the procedure her lips had become ‘huge’.

Lauren said: ‘My lips looked like a baboon’s bum. They went around six times bigger than their normal size. It was very painful. 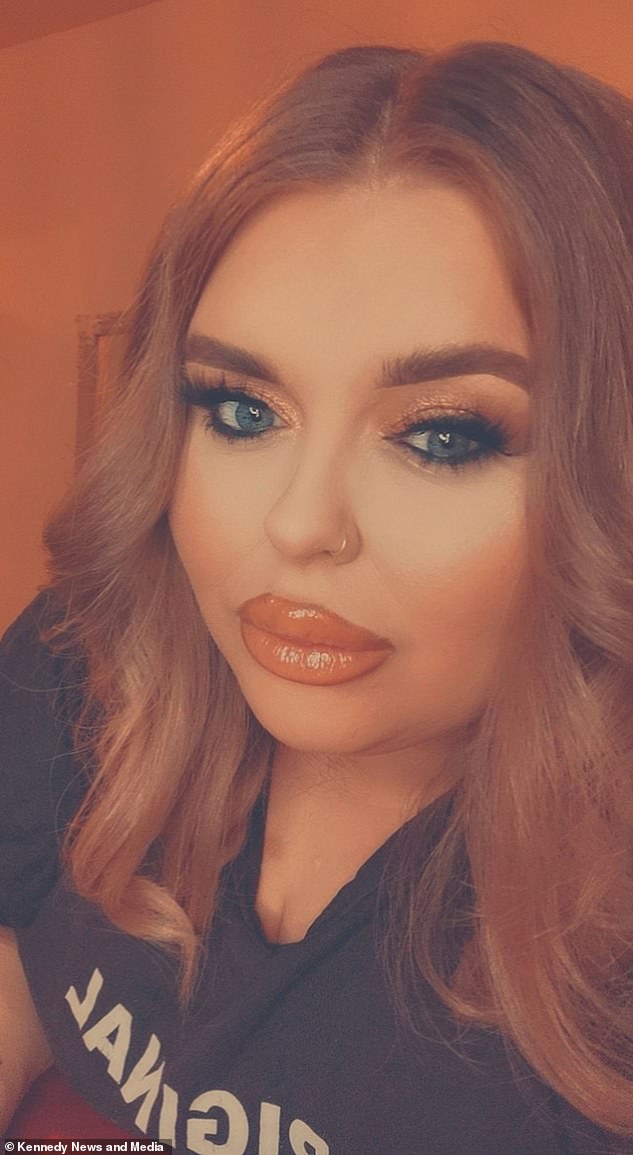 The beauty lover said that she’d have her lip filler refilled around every six months, and topped them up with just under one ml this time around (pictured, before the ordeal)

The beautician, who has long been a fan of filler,  said she gets her lips done as a ‘confidence boost’ (pictured)

How severe anaphylactic shock can kill within MINUTES – and can be triggered by anything from medicines, allergies – and even CONDOMS

Anaphylaxis, also known as anaphylactic shock, can kill within minutes.

It is a severe and potentially life-threatening reaction to a trigger, such as an allergy.

The reaction can often be triggered by certain foods, including peanuts and shellfish.

However, some medicines, bee stings, and even latex used in condoms can also cause the life-threatening reaction.

According to the NHS, it occurs when the immune system overreacts to a trigger.

It is considered a medical emergency and requires immediate treatment.

Insect stings are not dangerous for most victims but a person does not necessarily have to have a pre-existing condition to be in danger.

An incremental build-up of stings can cause a person to develop an allergy, with a subsequent sting triggering the anaphylactic reaction.

‘I went into anaphylactic shock. My neck started to swell which meant my airways started to close.’

She arrived at the hospital at around 10:30pm, and didn’t leave until the following afternoon.

She explained: ‘I went to A&E and there was a huge wait.

‘I was waiting for about six hours and they started to go down because I had some antihistamine.

‘I fell asleep and they woke me up to give me some more antihistamine and they said that they were getting bigger and bigger.

She continued: ‘My lips were really sore and I felt a bit sick.

‘At first I was fine in A&E… I couldn’t close my mouth and was struggling to talk quite a bit but then the nurses rushed me through to resus and I couldn’t really talk at all.’

‘They basically rushed me into resus and injected me with adrenaline and that worked.’

She continued: ‘They didn’t really say a lot to me and just rushed me straight through to resus.

‘When you think of resus and watch TV programmes, that’s where you get rushed to when it’s life-threatening and I was like “But I was walking, I’m fine.

“How am I like this and being rushed into this place?”‘

She said she was sent home with antihistamines and that although the swelling took three days to subside, her lips are still painful five days later.

Footage captured by the mother-of-two shows her lips which became so red and swollen that she compared them to the primate’s infamous backside.

The clip has since amassed more than 23,000 likes, comments and views on TikTok.

Lauren said: ‘I’ve had a lot of lip filler and treatments before and had it previously around four weeks ago and didn’t have a reaction.

‘It’s unexplained as to why this happened. 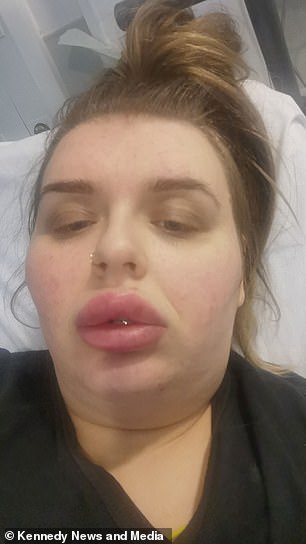 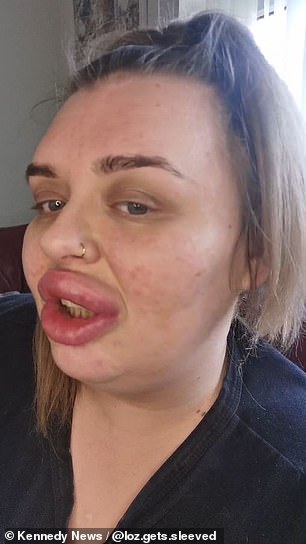 The beautician said that within four hours of having the procedure her lips had become ‘huge’ and she was unable to talk (pictured left, in hospital, and right) 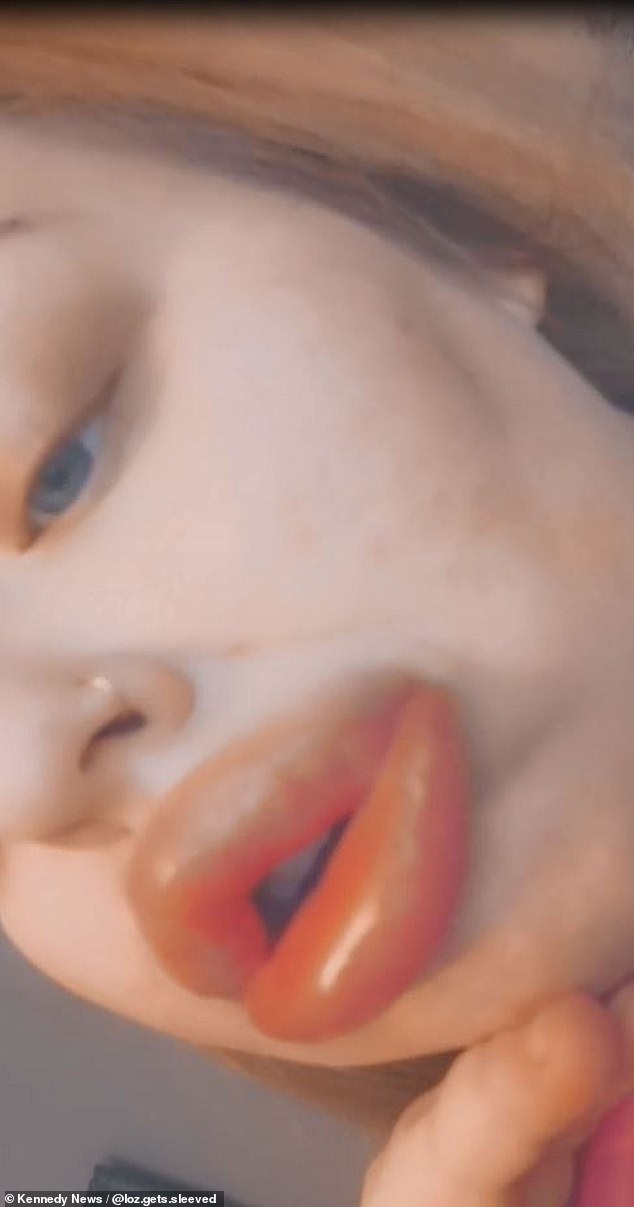 After waiting for treatment in A&E, Lauren was rushed through to resus by nurses at the hospital (pictured)

‘Apparently at any age and at any point you can develop an allergy to something.

‘I won’t be getting lip filler again anytime soon.

‘I want to have the allergy test to see exactly what I’m allergic to, the thought that it could happen again is very scary.

‘I don’t know if it was the filler or the numbing cream. 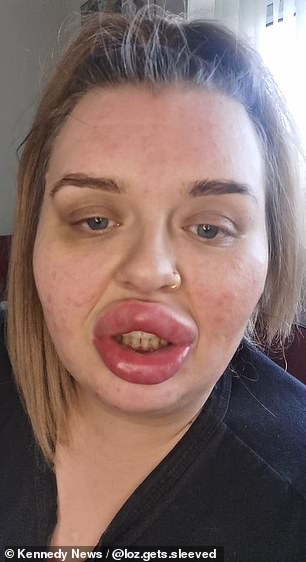 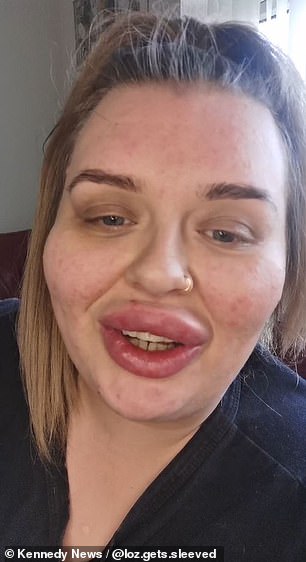 She said she was sent home with antihistamines and that although the swelling took three days to subside, her lips are still painful five days later