Mother, 31, is slammed after waxing her three-year-old’s eyebrows

An American mother-of-two has been slammed online after posting a video showing her waxing her three-year-old’s eyebrows.

Leah Garcia, 31, from Texas, who is of Hispanic heritage, said she suffered ridicule throughout her childhood for having thick and dark hair, as well as a prominent monobrow, and noticed her two daughters Behautti, 11, and Bliss, three, were similar.

The mother-of-two said her daughter Bliss was just two-years-old when she ‘asked’ if she could be waxed and the family now have ‘waxing day’ every week.

But after Leah posted a photograph online of the beauty practice online, she was slated as being a ‘bad mother’.

However she has hit back at claims, stating it will save the little girl from being bullied when she is older, adding: ‘People say I’m projecting my own insecurities onto her, and that I should teach her not to care what people think, but at the end of the day she’s human, and as much as we want to say what people say doesn’t bother you, it does.’

Leah Garcia, 31, from Texas, has received criticism from posting a video showing her waxing her three-year-old daughter’s, Bliss, eyebrows

Leah explained: ‘Bliss was just over two when I started waxing her. Bliss and her sister Behautti have eight years between them, and Bliss would always see me wax her older sister’s eyebrows so asked me if she could have it done too.

‘She asked two or three times before I finally gave in, but she never said I have unibrow, she just showed an interest in it.

‘We have a waxing day each week as I have to wax once a week, so when I do it, I ask if anyone wants their eyebrows waxing, and if they say no, I don’t do it.

‘People say she has no idea she even has a unibrow at the moment, but I wanted to wax it because the sooner you start with waxing, the less it grows back. 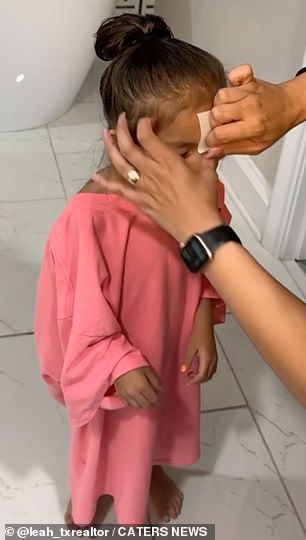 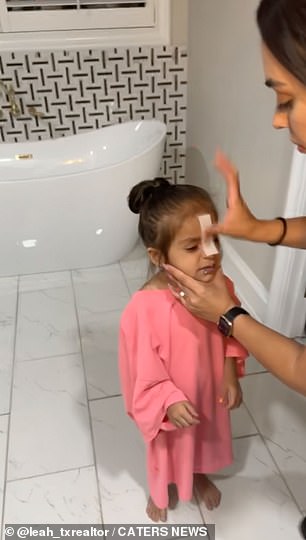 After sharing a video online she has fired back at claims she’s a bad mum for wanting to give her daughter the eyebrow treatment, stating it’ll save her from getting bullied when she’s older

‘With Behautti – who’s 11 – she hardly has a unibrow now because we’ve been waxing it for so long. I don’t mess with any other part of their eyebrows.

‘It doesn’t hurt Bliss any more than pulling off a plaster, it’s just basic grooming. Unless you’ve struggled with it yourself you don’t know.’

Intent on preventing her daughters from suffering the same cruel jibes, she now waxes the eyebrows of both her daughters.

‘I’ve never seen an adult walking around with a unibrow because they love it so much. 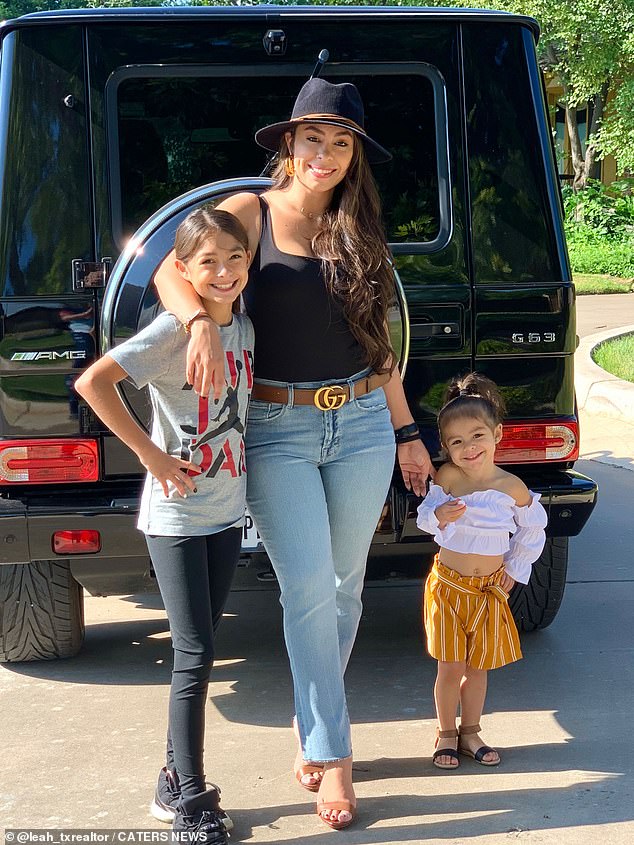 Intent on preventing her daughters from suffering the same cruel jibes, she waxes the eyebrows of both her daughters, Behautti, 11, and Bliss, three

‘When people say ‘why are you doing that?’, I say ‘well I guarantee you don’t enjoy having a unibrow’.

‘My daughter is beautiful. I don’t care if people have a problem with me doing some basic grooming, just like taking her to get her hair cut.

‘If they grow up and want thick eyebrows again, it’s easy to come back from, but being bullied is something you don’t come back from and I’m preventing it from happening in the first place.

‘It is a hard thing to come back from and I’m just preventing that trauma, like any parent would want to do.

‘I’m not training her to be insecure, I just want my daughter to feel good. I’ve never met anyone whose unibrow gives them confidence. Sometimes she will want it done and sometimes she won’t, I will never force her.’ 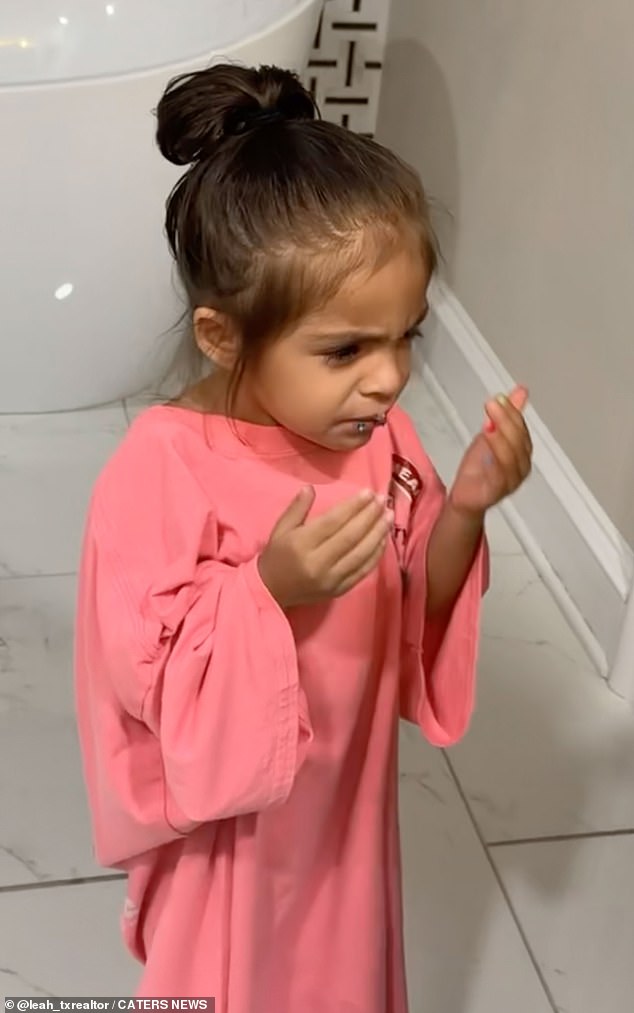 However, since posting a photo of the beauty regime, she’s received backlash from people saying she’s making her daughter insecure about something she’s unaware of.

She said: ‘A lot of people have asked me why I’d do this, and that I’m doing it for attention, but that was not my intention at all.

‘I don’t know any mums who wax their daughters’ eyebrows, so I wondered if I’d get a lot of negativity, but I know I’m not the only one with a hairy child.

‘I want other mums to know that whatever you feel is best, you should just do it, and what you know will protect your child.

‘I teach my girls to be unapologetically themselves and I know them better than anyone else in this world.

‘I got so many comments from other mums thanking me and saying they have wanted to do this as well but were worried what others would think.

‘Others say they do this but have done it in secret as they were worried about what people would say. 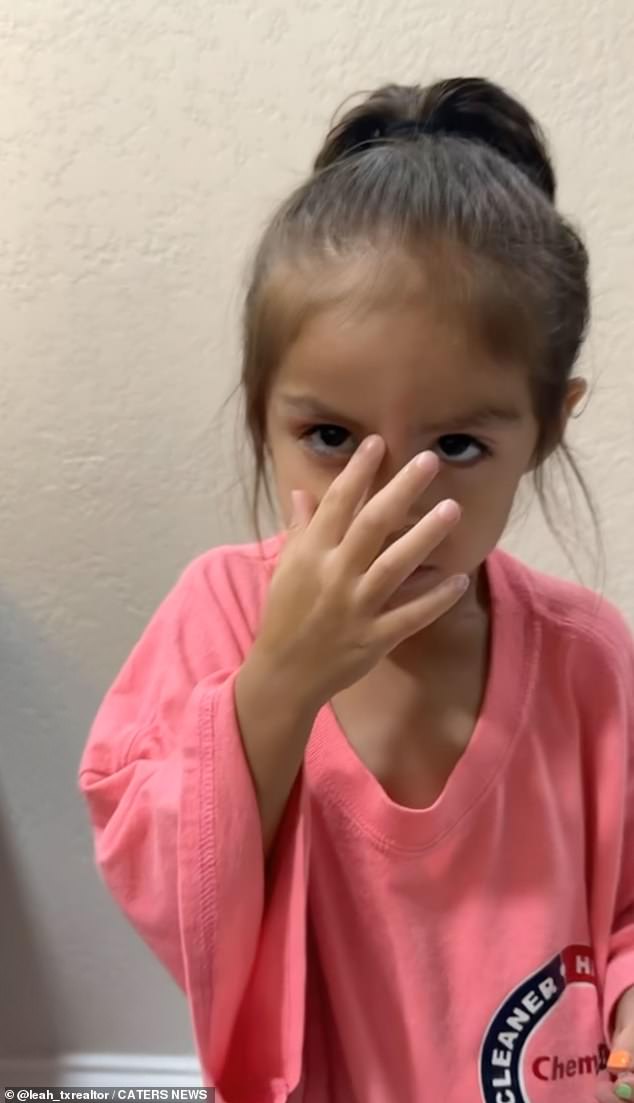 The little girl, who donned an oversized pink T-shirt,  touched her forehead after the painful wax strip was removed

‘The video has done what I wanted it to, and I knew there would be backlash, but I’m open to hearing people’s opinions, but no-one is entitled to hate so I’ve just been blocking the hateful comments.

‘A viral influencer used my TikTok video and called me a bad parent and was really negative, but to me this is just basic grooming if you are hairy, and people who aren’t just don’t understand.

Leah herself grew up being tormented for her looks, and she wants to make sure her daughters never have to go through what she did.

She adds: ‘We have very thick hairs which are from my Hispanic roots. I am very hairy, and I remember being younger and none of my siblings were as hairy as me and they would make fun of me.

‘In school kids pointed it out, and boys even asked me why my eyebrows looked so big, and that was the first time anyone apart from siblings made fun of me.

‘No matter what, my parents wouldn’t let me wax, so I shaved them and of course it didn’t look great, so I got made fun of even more.

‘When people say I’m making her insecure, I laugh and think there is nothing in the world that can make her insecure. She has so much confidence.’