Mother, 34, is left with a HOLE in her face after using sunbeds for almost a DECADE

A mother-of-two was left with a ‘huge hole’ in her face from almost a decade of tanning.

Surgery to remove the hole left the 34-year-old with face paralysis and crippling headaches that ‘feel like I’m being struck by lightning’.

Carrie Doles, from Chicago, Illinois, was diagnosed with skin cancer at the age of 26, almost ten years after her first sunbed at the age of 18.

Whilst at university, she was using them every day for four years.

As well as this, Mrs Doles never wore sun cream and would lie out in the sun whenever she could, only occasionally replenishing her skin with moisturiser afterwards.

Mrs Doles was told she had skin cancer at 26 years old, two weeks before getting married to Chris (above) after almost ten years of tanning 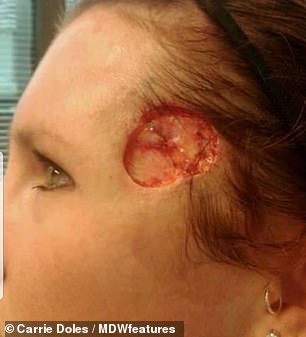 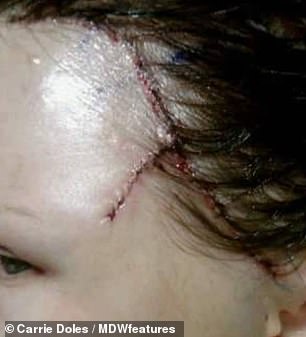 Mrs Doles, from Chicago, Illinois, USA, was left with a huge hole in the side of her face after surgery six times to remove her skin cancer 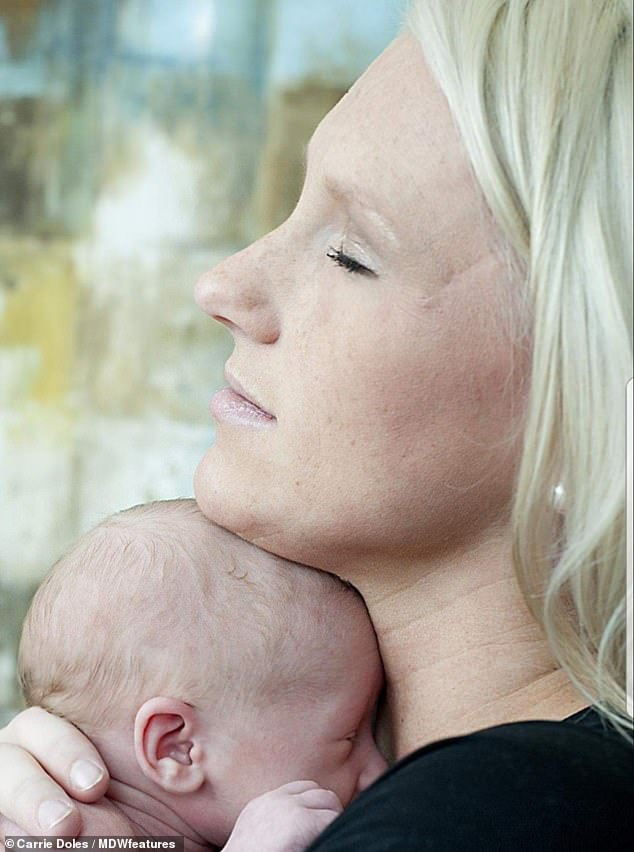 Mrs Doles, a mother to two, has been left with scars from surgery she had to remove skin cancer after using tanning beds. At university, she used them every day for four years

‘In college I would go tanning every day’, said Mrs Doles.

‘I didn’t know what skin care was then, I was young and felt I didn’t need to take care of my skin at such a young age. My skin was lucky if I put SPF 15 on it or any type of moisturiser.’

In 2010, Mrs Doles noticed a small pencil-sized scab that appeared on her left temple which would fall off only to reappear again.

This continued for six months before she went to a dermatologist who said it was skin cancer.

With her wedding to fiance, Chris, just two weeks away, Mrs Doles’s doctor postponed her biopsy until after her wedding.

‘Then after my wedding I went back in to biopsy it,’ Mrs Doles said. ‘They took a sample of it out and left me with two stitches.

‘Then called me within the next week to say it was confirmed, basal cell skin cancer.’ 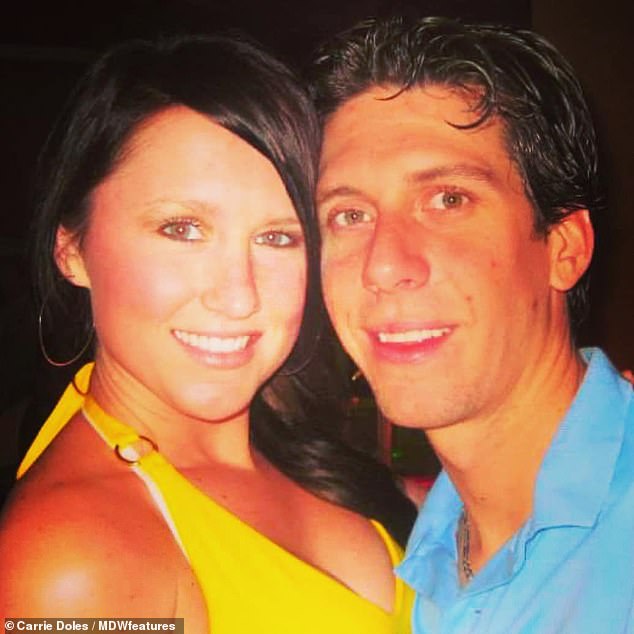 Mrs Doles is warning others of the dangers of tanning beds and not using SPF after her ordeal. Pictured on her honeymoon, Mrs Doles had her biopsy after her wedding. 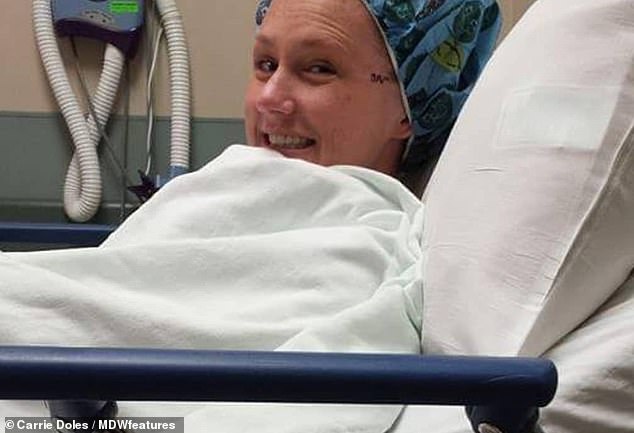 Mrs Doles, pictured in hospital, said she was shocked to find she was the youngest person in the waiting room, with most people over the age of 70

‘It scared me to have been diagnosed with a skin cancer at such a young age but I was always under the assumption that basal cell was the “good kind of cancer” and it would be no big deal. But not so much.’

Basal cell carcinoma is a type of non-melanoma skin cancer.

It normally appears as a small, shiny pink or pearly-white lump with a translucent or waxy appearance but can also look like a red, scaly patch which sometimes has brown or black pigments in it.

The lump usually gets bigger and may become crusty, bleed or develop into a painless ulcer. 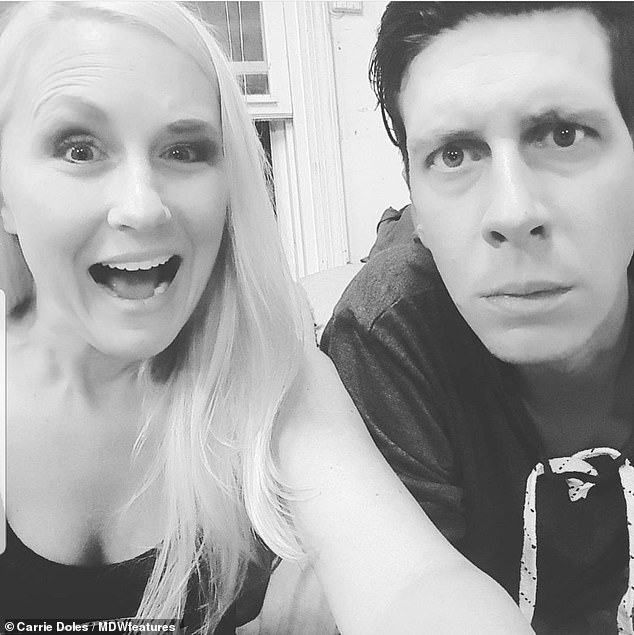 Mrs Doles has been left with paralysis on the left side of her face, seen above. She gets crippling headaches and her eye constantly waters 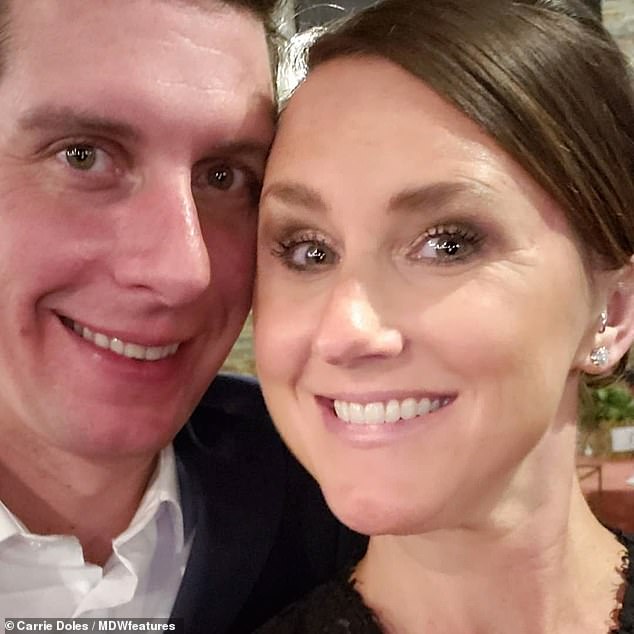 Mrs Doles’s scars healed, but her surgeon said the nerves in her face will take some time to come back 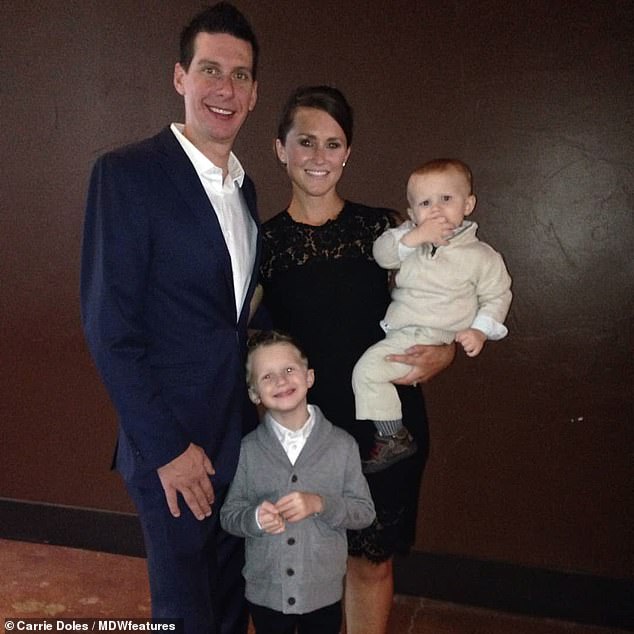 Pictured with her family, Mrs Doles now takes her skin care routine very seriously and goes into schools to tell her story and discourage other young people from worshipping the sun like she once did

Mrs Doles went into detail about the procedure to remove the cancer from her face.

She said: ‘They numbed me up and started to cut. It was a crazy feeling. I didn’t feel them cutting but I heard it.

‘So, first round done, they gauzed me up, I was sent to the waiting room and then they went to look at the sample under the microscope.

‘I sat in the office waiting area for about thirty minutes or so. I was the youngest one in that whole office. Most patients were over the age of seventy.

How can I keep my skin healthy?

Protect it from the sun: UV rays in sunlight are a major cause of skin ageing and skin cancer. Protect skin from sun damage by avoiding direct sunlight on sunny days or in hot countries, and by using sunscreen.

Stop smoking: Smoking causes skin to age prematurely by breaking down collagen, which reduces its elasticity, and cutting off supplies of oxygen and nutrients.

Wash regularly: Wash skin regularly using mild soap and warm water, but too much washing or harsh soaps can dry skin out. Moisturise after washing if you have dry skin.

‘Then they called me back in and said the margins were not clear (the edges still had cancer cells in it) so they would need to cut more out and repeat this procedure until there were no more cancer cells seen under the microscope.’

Doctors had to carry out the removal procedure a total of six times as it wasn’t clear where the affected and healthy cells were.

This left her with a gaping hole on the side of her face, which was stitched up by a plastic surgeon the next day.

‘We finally met with the surgeon and he explained to me that we had to test my nerve reaction and then schedule a surgery first thing in the morning,’ said Mrs Doles.

‘He hooked me up to a nerve stimulator and sent electrical pulses through my face to see if they had cut any nerves. No function.

‘So, I had to go home that night, clean and care for my open wound on my own. I couldn’t eat anything because of surgery in the morning and I couldn’t take any pain pills.

‘Surgery finally came. He was able to reattach my nerves but in order to close up the hole and have my face look even, he had to do a mini face lift and a mini brow lift.’

Then in 2014, Mrs Doles’s cancer came back for a second time in the same place but was removed by a head, neck and throat specialist at a cancer treatment centre.

Mrs Doles’s scars healed, but her surgeon said the nerves will take some time to come back.

However, six months later, there was no improvement and Mrs Doles had surgery again to do scar revision and ‘try and fix the nerves’.

‘I was told this time it could take a year or so for the nerves to come back,’ she said.

‘I still have slight paralysis on my left side. The scar area is super tender. I can’t have any pressure put on it or have anyone touch it. My eye still waters constantly.

‘Every now and then I get bad headaches. It feels like I am being struck by lightning in that area. I still cannot raise my left eyebrow.’

Mrs Doles now takes her skin care routine very seriously and goes into schools to tell her story and discourage other young people from worshipping the sun and tanning beds like she did.

‘I always wear an SPF of thirty all day every day before I put my makeup on and even in the winter,’ she said.

‘I don’t lay out in the sun anymore and if I am out, I wear a large brimmed hat and seek shade as much as possible. I also use intense moisturiser on a daily and nightly basis.

‘Tanning whether outside or in a tanning bed is so bad for you and your skin. Not only will you get wrinkles but your risk of developing skin cancer is increased.

‘Stop tanning. Your skin will thank you when you are older.’