A mother has revealed how people often mistake her rare form of cancer as being a baby bump.

Jemily Brown, 35, was diagnosed with pseudomyxoma peritonei in September 2017. The disease is said to strike just one in 500,000 people every year.

PMP usually starts as a polyp in the appendix. The cancerous cells then spread to the lining of the abdominal cavity, where they produce a mucus that accumulates as jelly-like fluid called mucin.

In an attempt to beat the disease and her so-called ‘jelly belly’, she endured a 12-hour operation to remove six litres (1.3 gallons) of mucin in October 2017.

Mrs Brown, from Sandhurst in Surrey, also had eight non-vital organs removed – but the tumour returned in September last year.

With doctors warning there is little more they can do, Mrs Brown is now on the waiting list for an experimental treatment, where she will receive a donor stomach, small intestine, large bowel and pancreas. 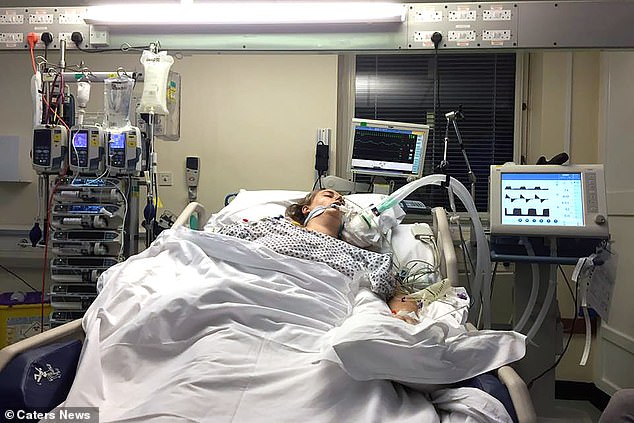 Mrs Brown has pseudomyxoma peritonei (PMP), which is said to affect just two-in-a-million people a year. After starting as a polyp, the cancerous cells spread to her abdominal lining. She is pictured in October 2017 during an operation at a hospital in Basingstoke to remove six litres (1.3 gallons) of fluid and eight non-critical organs that had become diseased 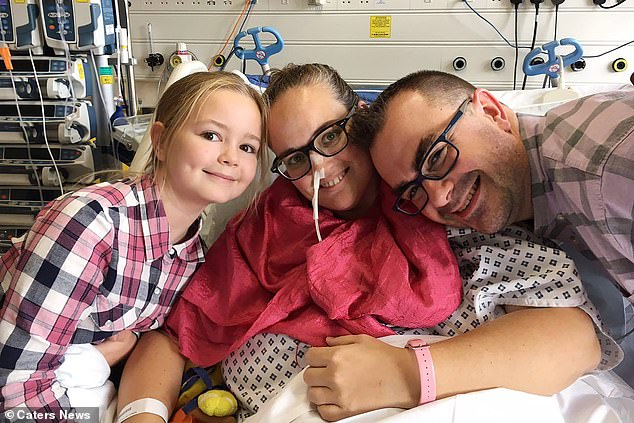 Mrs Brown is pictured with her husband Tim and their daughter Mayana a week after ‘the mother of all surgeries’. Although it seemed to go well, her cancer returned a year later

Speaking of her ‘bump’, Mrs Brown said: ‘I was in a queue at the bank and the cashier looked at me and asked, “When’s the baby due?”.

‘I said I wasn’t actually pregnant and she got very flustered.

‘I’ve become far more blasé about it. I don’t take it to heart as much, it doesn’t make me cross these days like it used to.’

This was not the only occasion a stranger thought Mrs Brown was expecting.

WHAT IS PSEUDOMYXOMA PERITONEI?

Pseudomyxoma peritonei is a very rare form of cancer that typically starts in the appendix and spreads to the pelvis.

It is thought to affect just two in every one million people.

Pseudomyxoma peritonei develops after a polyp within the appendix bursts through the organ’s wall.

This causes mucus-producing tumour cells to spread through the abdominal-cavity lining.

As these cells accumulate, the abdominal area becomes inflamed and gastrointestinal activity may slow.

Pseudomyxoma peritonei usually causes bloating of the abdomen, which is not painful to touch. It’s cause is unclear.

Without treatment, the intestines can become blocked, leading to malnutrition and life-threatening complications.

Some 65 per cent of patients are cured following treatment.

This usually involves surgery to remove the tumour.

To prevent the cancer cells re-implanting, the abdomen may be washed with a chemotherapy solution.

Her husband Tim, 40, added: ‘Just before she had the operation Jemily and I went out to pick up a new wedding ring as I didn’t want her original one damaged in hospital.

‘The shop assistant looked at us and asked if were getting married because Jemily was having a baby. I was speechless.

‘Jemily said, “It’s a tumour and it’s coming out on Tuesday”.’

Mrs Brown, who is mother to 10-year-old Mayana, started vomiting multiple times a day in April 2017.

She was also battling fatigue and noticed her abdomen was expanding.

Doctors were initially baffled as to what was wrong and treated Mrs Brown for a pulmonary embolism. An expanding abdomen is not usually a symptom.

Five months after her symptoms began, a scan showed fluid was accumulating in her abdomen.

Mrs Brown was forced to undergo cytoreduction with HIPEC, dubbed ‘the mother of all surgeries’, at a hospital in Basingstoke.

Mrs Brown also had her belly button taken out and her diaphragm ‘stripped’ of mucin.

Without a large bowel, she has to be fed intravenously every night, with waste accumulating in a stoma bag.

The ordeal also forced Mrs Brown to give up her job as an administrator.

Mrs Brown (pictured left before the operation) was often asked by shop assistants when her baby was due. The mother-of-one is pictured right looking slimmer after the surgery 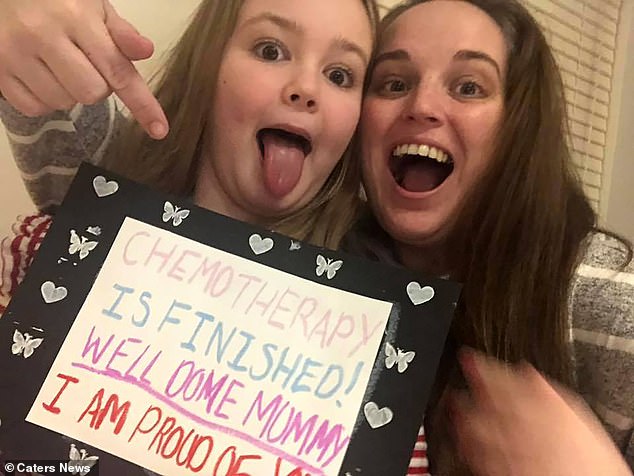 After discovering the cancer had returned, Mrs Brown was told she needed chemo. She is pictured with her daughter celebrating the end of the grueling treatment. Sadly, Mrs Brown learnt in January this year it had not worked and her options were limited 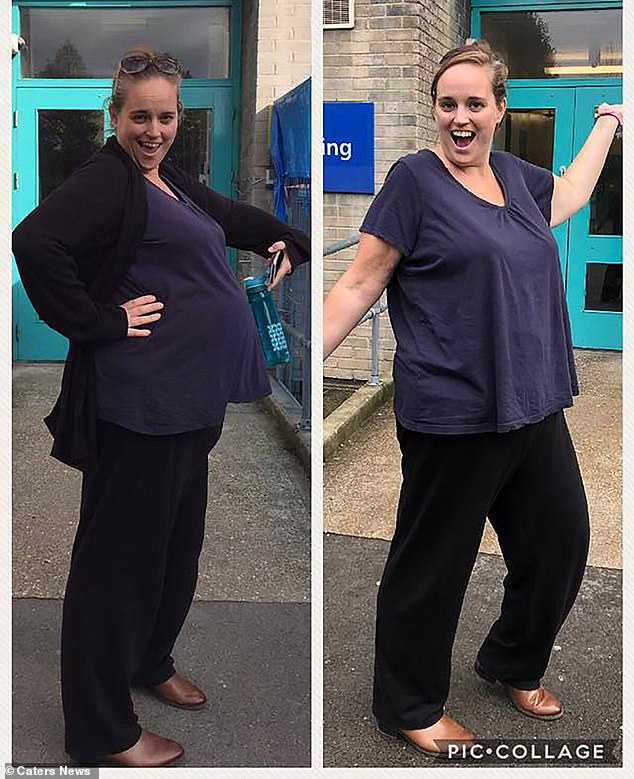 The operation seemed to be a success, until the disease returned a year ago.

‘The initial surgery took a lot away from me but was worth doing for the 14 months I had afterwards’, she said.

This time, Mrs Brown was told she needed six rounds of chemo. After completing the grueling therapy, the mother-of-one went to hospital in January with a blocked stoma bag.

While doctors were looking for the cause, they found the ‘jelly’ had returned and was ‘squeezing’ her internal organs.

Mrs Brown met with consultants in March to discuss the next step. She was told the only option left was a multi-organ transplant, which has reportedly only been performed 14 times in the world.

She is on a waiting list to have the procedure at Oxford University Hospitals. Mrs Brown is expected to be in hospital for around eight weeks, followed by six months of recovery at home.

Doctors have warned the operation will not cure Mrs Brown but could extend her life and improve her quality of living.

‘One of the hardest things for me is how rare this condition is,’ she said. ‘It’s uncertain territory a lot of the time.

‘I’m on edge all the time waiting for the phone call from the hospital.’ 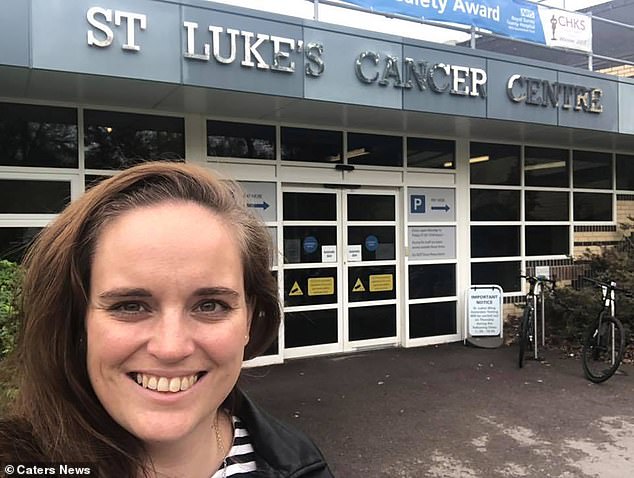 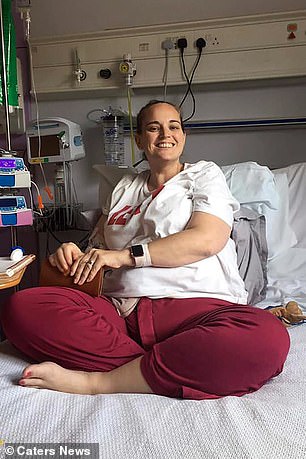 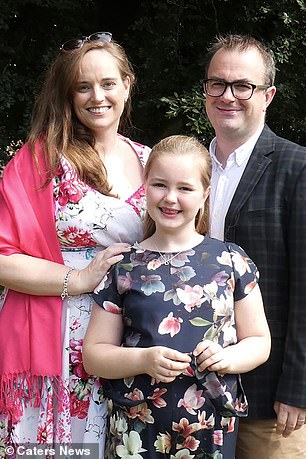 Despite all she has endured, Mrs Brown (pictured left at a hospital in Basingstoke) manages to smile through it. She is on a waiting list for an experimental treatment to receive four donor organs. She insists the ordeal has made her family (pictured together right) closer 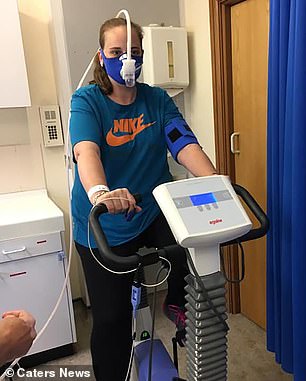 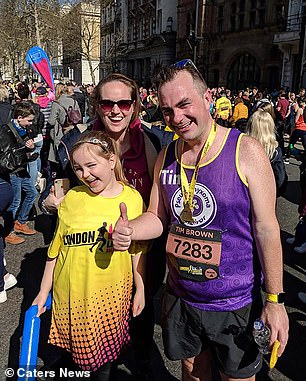 Mrs Brown is pictured left having her health assessed to check she is fit enough for a transplant. Doctors have warned the next operation will not cure Mrs Brown but could extend her life. She is pictured right with her daughter and husband after he ran a half marathon

Despite all she has endured, Mrs Brown insists the ordeal has brought her family closer together.

‘It’s not something you ever want to go through but at the same time it’s brought us closer, we definitely appreciate our time together,’ she said.

Her husband, a photographer, added: ‘It’s been pretty life-changing. You have to adapt to what is normal though.

‘She’s kept a positive outlook in pretty horrendous circumstances and she tries to remain positive.

‘It’s hard though to know what she’s gone through and what could still come.

‘Despite that we still try to enjoy things and try and live each day to the full.’

Mrs Brown is raising money to help her make ends meet while she fights the disease. Donate here.