Mother, 35, who spent more that £100,000 on cosmetic procedures praises her hair transplant

A woman who has spent over £100,000 on cosmetic procedures has revealed her latest – a hair transplant.

Tracey Kiss, 35, from Buckinghamshire, has had four boob jobs, a labiaplasty, a Brazilian bum lift and many more procedures to enhance her natural look – but she has now decided to opt for a hair transplant too after ‘suffering in silence’ while her hair gradually thinned over 10 years.

After years of bleaching her locks, as well as two pregnancies, Tracey had noticed her hair thinning and her scalp becoming exposed. She also noticed her hairline was receding so embarked on another procedure.

With handfuls of hair dropping out in the shower she tried prescription medications, as well as hair gummies, laser therapy, oils, and massage techniques, but never knew a female hair transplant was an option.

A woman who’s spent over £100,000 on a whole host of cosmetic procedures has revealed her latest – a hair transplant

‘It became apparent I was suffering from hair loss 10 years ago when I had my second child,’ she said. ‘Handfuls of hair would drop out in the shower and on a sunny day I could suddenly see my scalp through my hair.

She explained that over time, she ‘tried every treatment available’ – before realising, this year, that she ‘had to take drastic action’.

Tracey says she used to have ‘thick and bouncy, glossy hair’ as a child – but it began to to thin during her teens, when she ‘discovered bleach’. 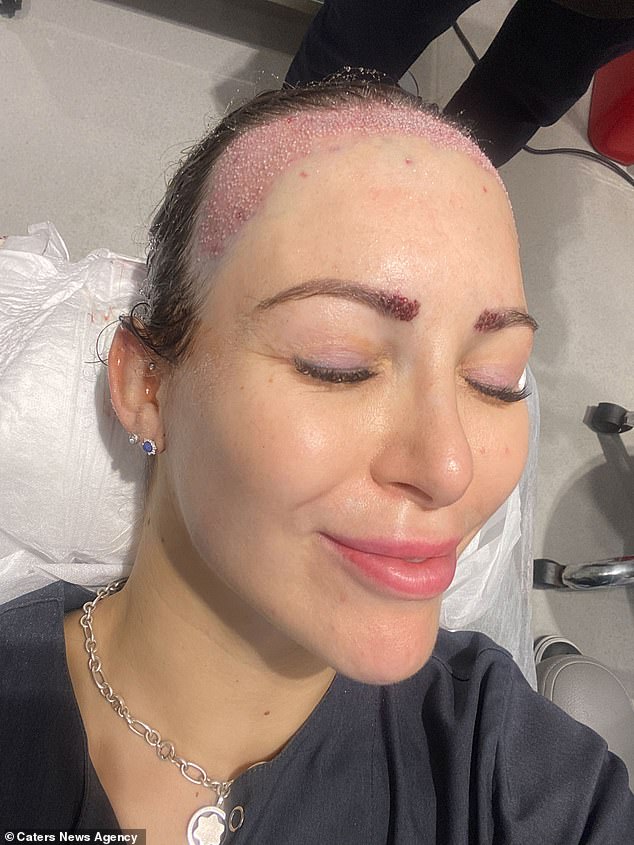 After years of bleaching her locks, as well as two pregnancies, Tracey (pictured with her post surgery scars) had noticed her hair thinning and her scalp becoming exposed 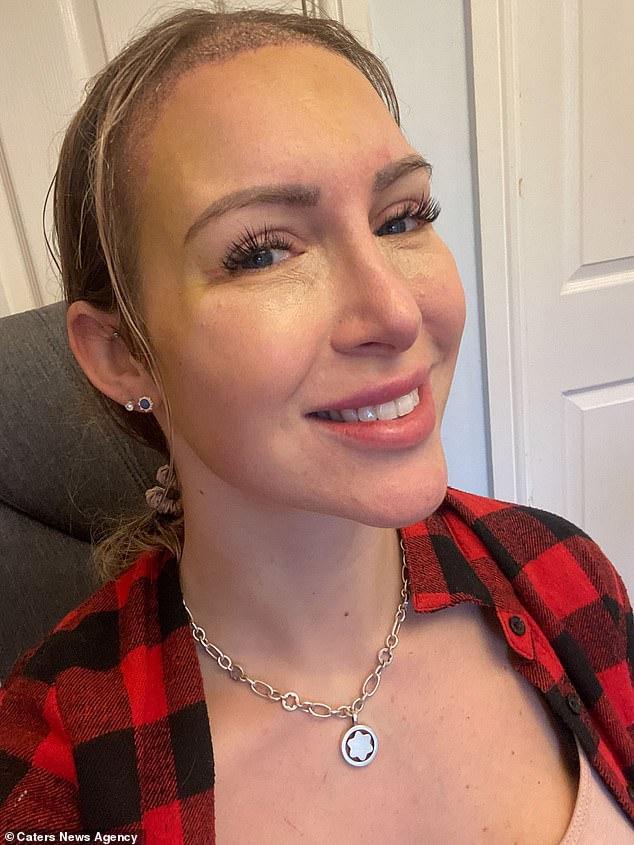 Tracey Kiss (pictured), 35, from Buckinghamshire, didn’t want to suffer in silence anymore after watching her hair drastically fall out – and damaging her confidence – for the past ten years 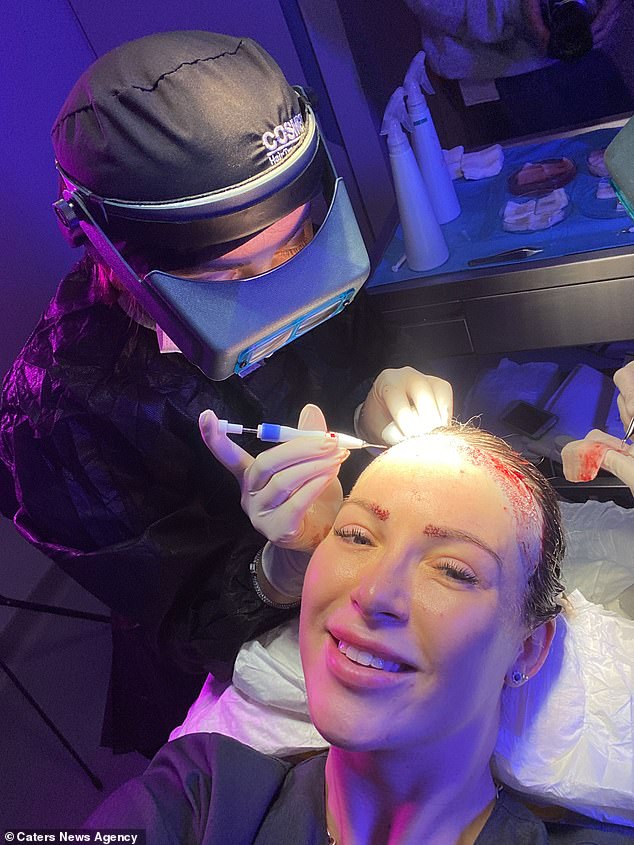 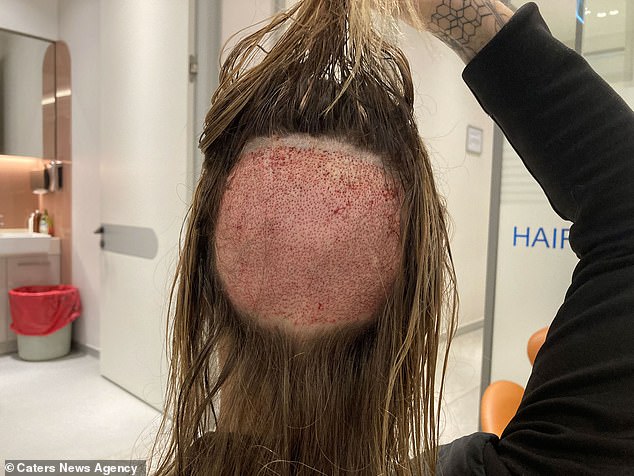 Tracey (with the back of her head, where surgeons used hair from, pictured) says she used to have ‘thick and bouncy, glossy hair’ as a child – but it began to to thin during her teens, when she ‘discovered bleach’ 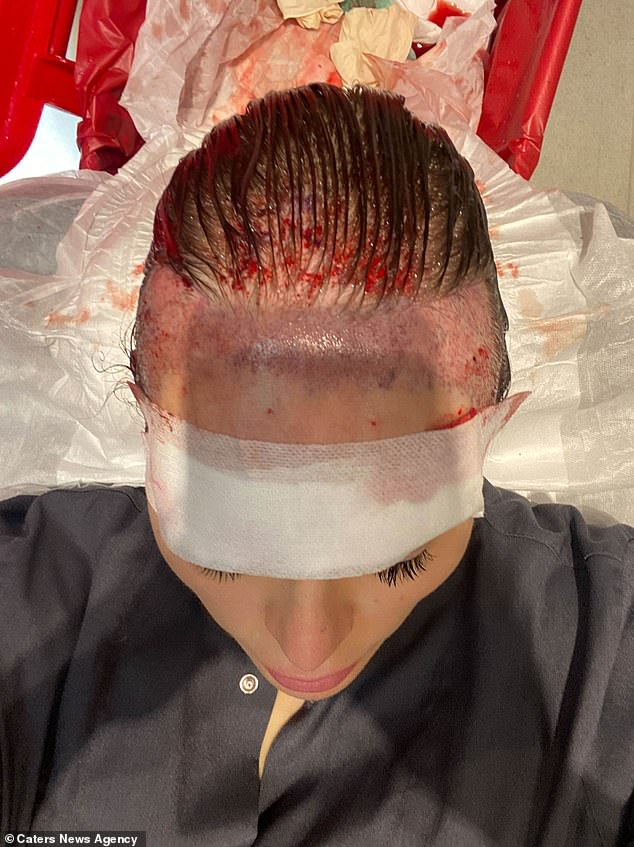 She added: ‘Despite going to a hairdresser, they applied bleach directly to my scalp which tingled, burned and caused my hair to break off and thin.

‘After years of bleaching and two pregnancies, by the time I had my son 10 years ago my hair was so weak, limp, damaged and falling out that I first saw my scalp exposed and moved my hairline off centre to disguise it.’

Her hair ‘only got thinner with time’, with a receding hairline. Tracey said her temples ‘disappeared’ and her scalp became visible ‘to the point where combing her parting to one side could no longer conceal it and so I sought surgery’.

Claiming she has tried ‘almost every treatment on earth’ to slow or reverse the effects or hair loss and thinning – and ‘none of the options available to her were a “quick fix”‘. 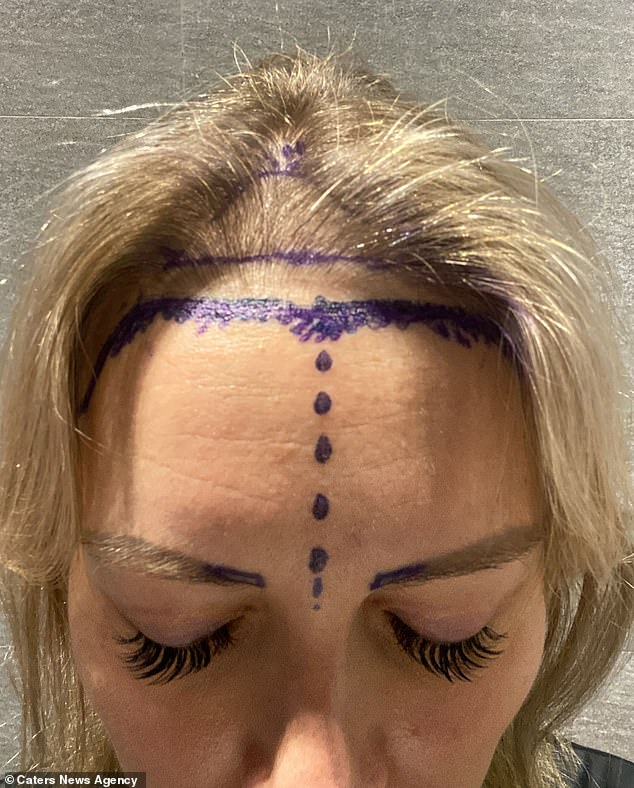 Tracey, pictured, said her hair ‘only got thinner with time’, with a receding hairline plunging her self-esteem 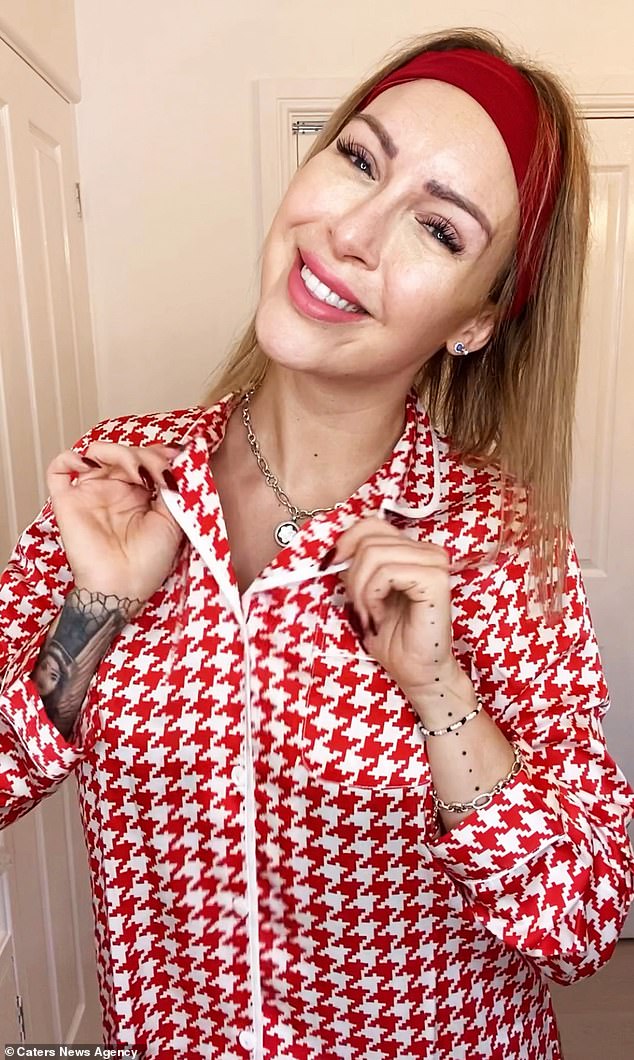 Tracey (pictured) had always hidden the drastic amounts of hair she’d lost from her friends and family, and revealed they were shocked when she explained what procedure she was having next

‘It takes months of consistent use and dedication to see change, which left me disheartened, alone and helpless.’

Tracey said said pregnancy ‘accelerated her hair loss’, left her feeling she had ‘nowhere to turn to stop what was happening’.

‘I suffered in silence for a decade,’ she admitted, candidly opening up about the emotionally draining consequences of her ordeal.

‘My immediate results of my hair transplant surgery were therefore life changing, instantly giving me 2,500 follicles in place, something that no amount of treatment or time could have replaced otherwise,’ Tracey said. 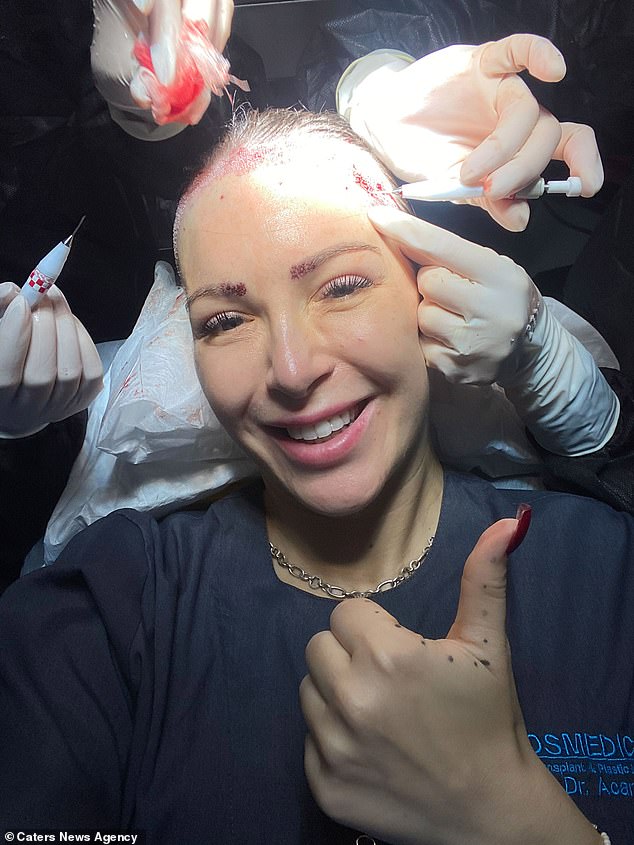 ‘To lose hair that was once there is like watching something die a slow and painful death, you feel helpless to prevent it, yet you know how it eventually will end – baldness!’

Tracey had always hidden the drastic amounts of hair she’d lost from her friends and family, and revealed they were shocked when she explained what procedure she was having next.

She added: ‘My friends and family were initially very shocked when I decided to get a hair transplant as it’s not something they ever expected me to do.

‘I think they’d have expected me to say I’d like to have a breast reduction or uplift after having children rather than repair or refill my hairline because it’s not the ‘done thing’ for women in society. 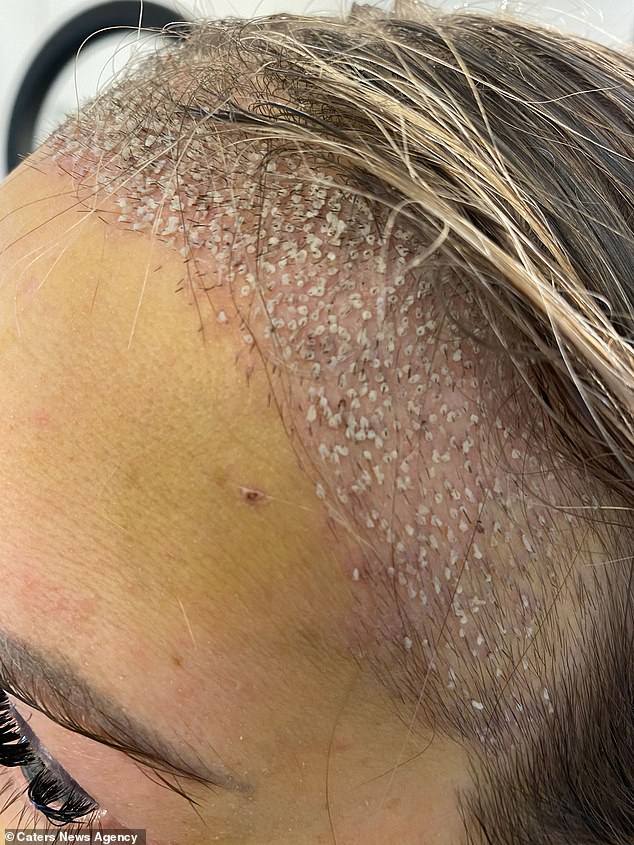 Tracey, pictured dealing with the after effects, says she wishes she could have done the procedure 10 years ago 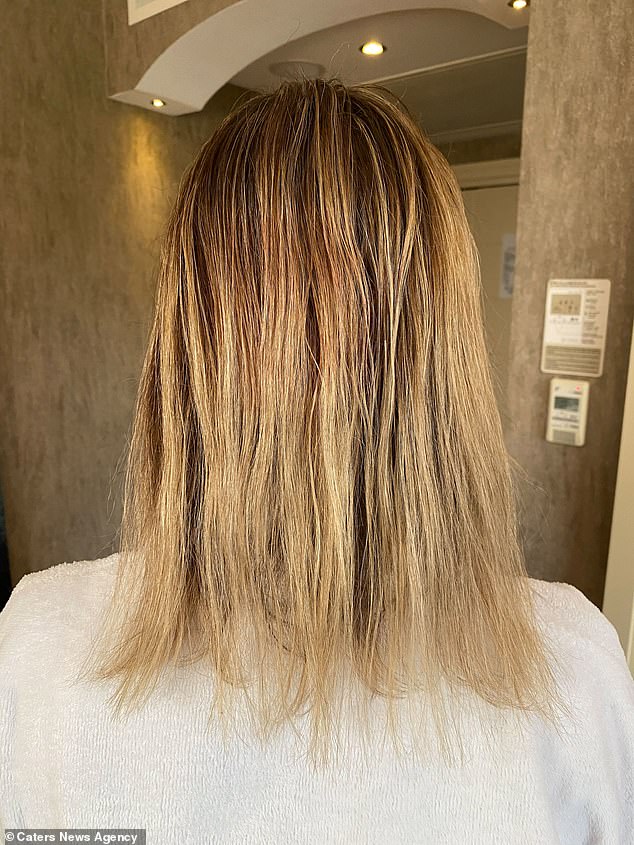 Tracey, pictured after the surgery, revealed that she never knew a female hair transplant was an option

‘I’ve been desperate to have a hair transplant for at least six years, but it was never available for women back then, only men, and so as soon as processes changed for women, I was straight on flight to Turkey.

‘I wish I could have done it 10 years ago when the problem began for me but I’m so thankful that it’s better late than never.

‘It is beyond life changing for me and so difficult to put into words what it means because nothing can do it justice.

‘Something that I spent so many years suffering in silence over has been returned to me.’

Hair transplants: How do they work?

Hair transplants are usually carried out using local anaesthetic to numb the area.

The strip method involves taking a thin strip of skin with hair from the back of your head and cutting them into pieces called hair grafts.

The grafts are then placed into tiny cuts made on the scalp.

To carry out follicular unit extraction, the back of the head must be shaved before individual hairs are removed one by one, and then placed into tiny cuts on the scalp.

Following the procedure, patients are advised to be incredibly careful not to knock themselves as the grafts are not secure.

After a few weeks, the transplanted hair will fall out and will later start to grow back.

New hair will start to appear after six months and full results will be visible in 12 to 18 months.