Mother, 36, was ravaged by a flesh-eating bacteria that consumed her abdomen

A flesh-eating bug ravaged a mother’s abdomen after she became infected while having a C-section.

Ashley Thompson, 36, from Conway, Arkansas, was induced when doctors discovered she was carrying the bacteria group strep B, which can be harmful if it passes to an unborn baby.

After suffering a prolapse, baby Jude was born via an emergency C-section on April 23 2014 and immediately rushed to intensive care due to breathing difficulties.

Forced to go home without her newborn, Mrs Thompson was blue-lighted back to hospital days later when she developed severe pain in her abdomen, which was diagnosed as necrotising fasciitis.

Given just hours to live, doctors were forced to reopen her C-section scar to cut away the infected tissue – and did not even have time to anaesthetise her.

After spending six days in an induced coma, the mother-of-three did not recognise her husband Eric, 31, when she woke or even remember giving birth.

Although her memories quickly returned, she still suffers severe abdominal pain and swelling four years on, which have left the former nurse unable to work.

Ashley Thompson’s abdomen was ravaged by flesh-eating bacteria after she became infected while having a C-section to deliver baby Jude. Pictured with the newborn after the incident, she claims their bond is particularly strong due to the ‘hell’ they went through together 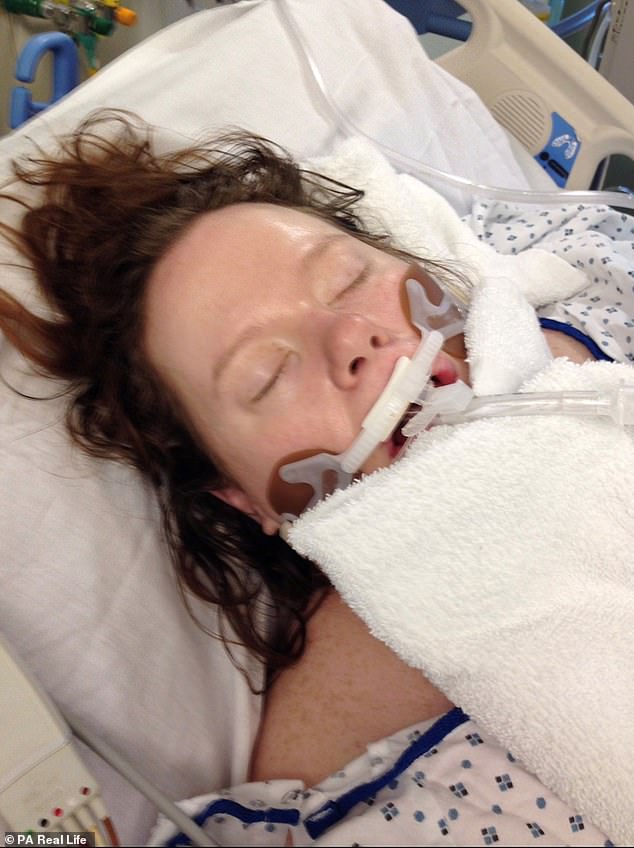 Doctors were forced to cut away Mrs Thompson’s infected abdominal wall in order to save her life. She is pictured in an induced coma, which she stayed in for six days to recover 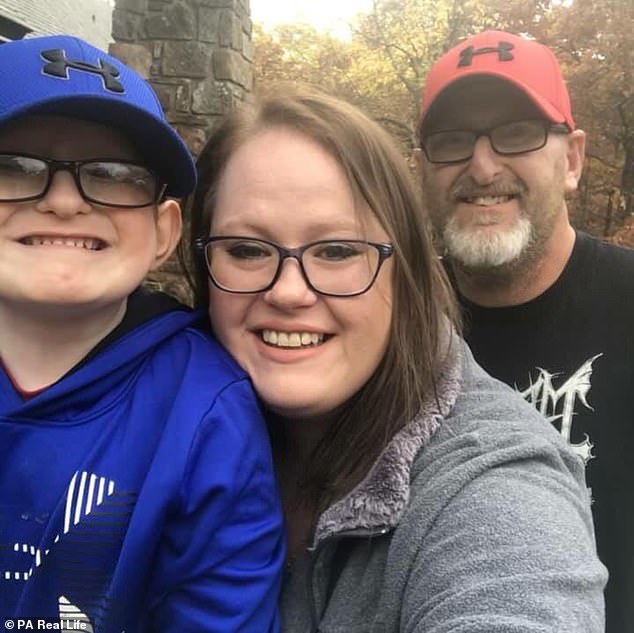 Jude is now four years old (pictured left with Mrs Thompson and his father Eric Thompson, 31). Although over the worst of it, she still suffers too much abdominal pain and swelling to work

Speaking of her symptoms after giving birth, Mrs Thompson said: ‘Over the next two days, I started to realise something wasn’t right, as this awful pain built up in my tummy and a wave of confusion and tiredness hit me.

‘Still, even though it hurt a lot, I thought it was all to do with some sort of irritation from the stitches.’

After going to her GP to be on the safe side, Mrs Thompson was rushed to hospital

A scan then revealed her lower abdominal muscle wall – a layer of muscle between the organs and skin – was being consumed by the flesh-eating bacteria.

‘Everything then happened really quickly,’ Mrs Thompson said. ‘Before I knew it, I was lying in the operating room having my stomach ripped open.

‘It was such a race against the clock that they didn’t even have time to anaesthetise me, so I was awake as they cut my Caesarean stitching open again and cut the rotting flesh away. It was by far the worst pain of my life.

‘The surgeons knew that if they waited any longer I was going to die because of this thing. It felt as though someone was ripping my insides out.

‘The stench was so horrendous surgeons were having to leave the theatre to be sick. It smelled like death.’ 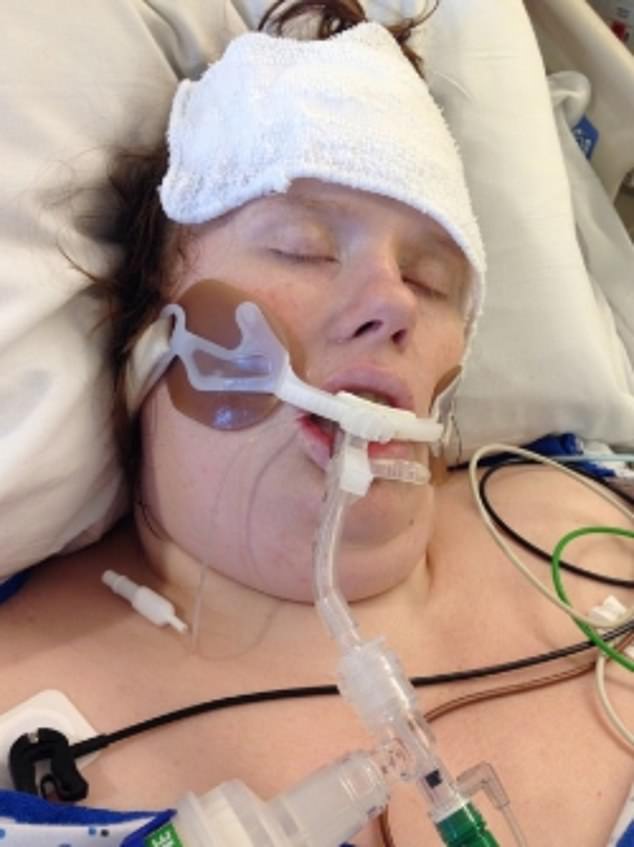 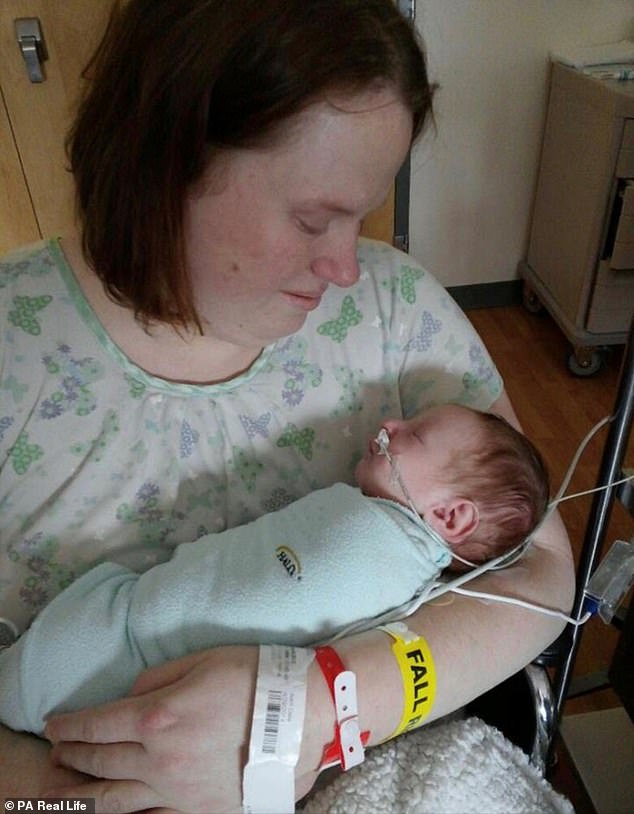 She is pictured holding Jude for the first time after coming out of the coma. She did not initially remember her husband or even giving birth, but her memories returned just a week later 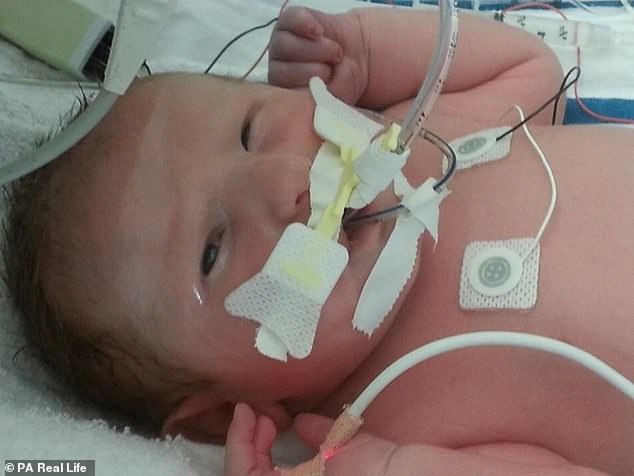 Mrs Thompson then endured a further two operations, which involved cutting out her entire lower abdominal muscle wall and replacing it with a pig-skin mesh to hold her organs in place.

After a total of ten hours under the knife, she was put into an induced coma to protect her organs, which had started shutting down as the necrotising fasciitis took hold.

After not initially recognising her loved ones, Mrs Thompson’s memories returned within a week and she quickly bonded with her newborn.

‘Jude and I have this connection that comes from the very difficult passage he had into the world,’ she said.

‘Once I had recovered enough to start taking care of him myself, I instantly became very protective of him, much more so than I am with my other children.

‘He was without a mother when he really needed it in the first few weeks of his life and I feel like we went through a hell of a lot together – that really creates a closeness.’

While Mrs Thompson, who is also mother to Hunter, 18, and Chance, 15, spent three weeks recovering in hospital, Jude was cared for by his father and grandparents.

‘I wanted to get myself better as soon as I could, so that I could be a mum to Jude and take care of him when he really needed me. That’s what kept me going,’ she said.

Although over the worse of it, Mrs Thompson is still deeply affected by what happened.

‘I find it very difficult to stand up for long periods of time because my belly very quickly begins to bulge and become agonising,’ she said.

‘I’m also covered in scarring, which really used to upset me.

‘Now, though, I have come to terms with it and with everything that happened to me. I’m not looking for pity or attention, but I really do feel proud that I survived this terrible ordeal.

‘It is amazing what the human body can overcome, and now I’m just set on living as long as I can and being the best mother I can be to my kids.’ Mrs Thompson spent three weeks in hospital recovering after the incident. Pictured with Jude during the stint, the newborn had to be cared for by his father and grandparents 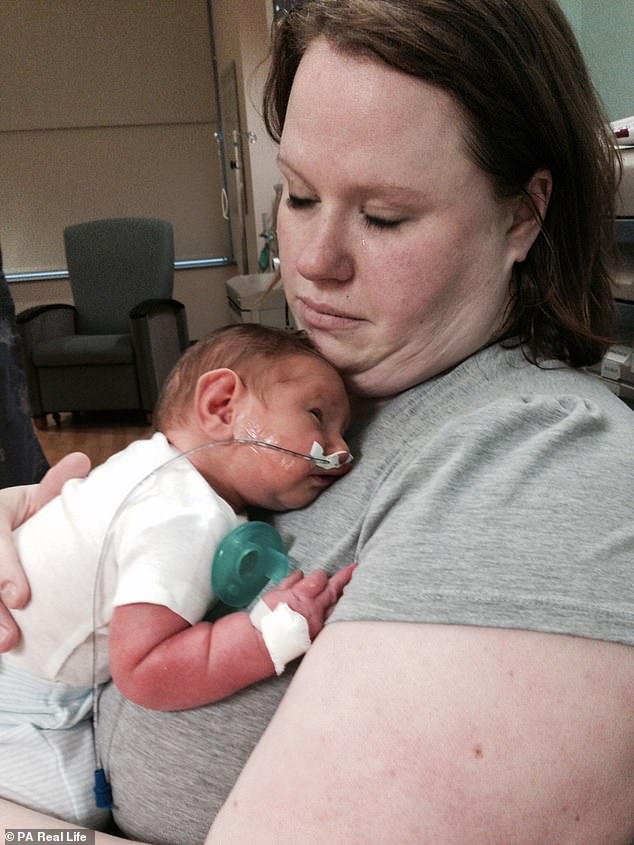 Pictured during her recovery stay in hospital, Mrs Thompson said wanting to be there to look after Jude motivated her to get better. She added she is ‘very protective of him’ 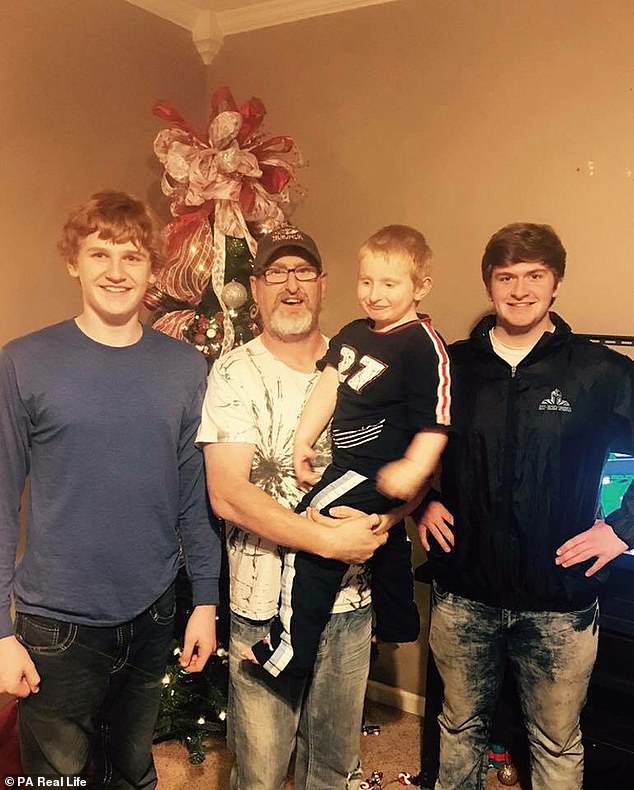