A mother-of-two was left with giant oozing blisters after she suffered two false widow spider bites within two months.

Sally MacFarlane, 40, mistook the ‘ticklish’ moment a spider sunk its fangs into the back of her right lower leg as a brush of grass while she was tending to her horse at her home in Grimsby, Lincolnshire.

She thought little of the small bloody mark she saw but within 48 hours the skin around the bite had turned bright pink and felt hot to the touch.

The childcare business owner went to the GP when she noticed the redness start spreading up her leg and was given antibiotics to tackle the infection.

Just one month later in July 2018 Ms MacFarlane realised she had been bitten again but this time on her other leg, and discovered a false widow infestation in her stable.

A year on from her ordeal, she said: ‘At its worst my leg was on fire and so itchy, it was horrible knowing that it was on my leg.

‘It covered a six-inch patch on my leg and three big blisters that were a bit bigger than 50p pieces.

‘I just had to grin and bear it and wait until the blisters popped on their own, and ran down my leg, which wasn’t very nice. 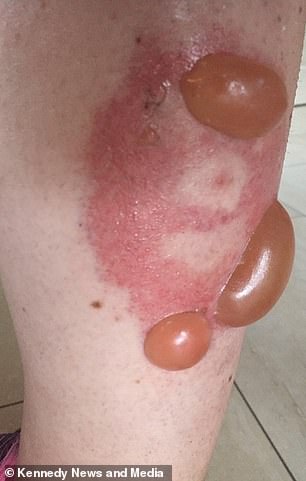 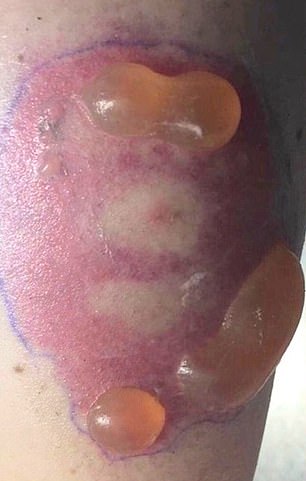 She was first bitten in June 2018 while tending to her horse at her home in Grimsby, Lincolnshire. Within days blisters the size of 50p coins had erupted on her leg

‘I sent a picture of my leg to my staff when I went to the GP and they all said it was horrendous.

‘They also pointed out that it looked like the pink and white Lots-O-Huggin’ Bear from Toy Story – once they said that I was like “oh my goodness, it does, doesn’t it?”.

Ms MacFarlane, who lives with fire officer husband Stuart Macfarlane, 42, and daughters Charlotte, 16, and Holly, 14, had been visiting her 13-year-old horse Pedro in a nearby field and said the spider sunk its fangs into her as she stood near the stables.

Sally said: ‘I was wearing shorts and there were obviously loads of flies around.

‘I felt something on my leg, it felt like someone tickling me, and just brushed my hand against it.

‘When I looked down I saw some blood on my hand and wondered where it had come from but thought nothing of it. 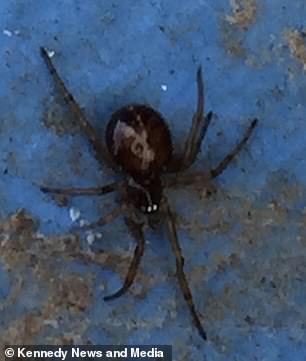 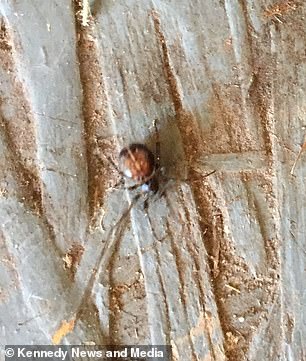 She went to the GP and was given antibiotics for the infection. Just one month later in July 2018 Ms MacFarlane realised she had been bitten again but this time on her other leg, and discovered a false widow infestation in her stable

‘Within 48 hours it started getting hot and around it started going pink. I took an antihistamine but it just kept getting bigger.

‘I drew a line round it so I could track it because I thought that’s what they’d do at the doctors.

‘The actual ‘dot’ bite bit started to blister and got bigger and that, along with the rest of my leg feeling hot and turning pink, made me think it was best to pop to the doctors and get it checked out.

‘I was given antibiotics to tackle the infection and was on them for about a week, but it took three months for it to heal properly as the blisters kept re-filling and draining again.

‘I went away on holiday with my leg still not fully healed.

‘As I was walking around in shorts I felt like people were looking and thinking ‘eugh, look at her leg’.’ 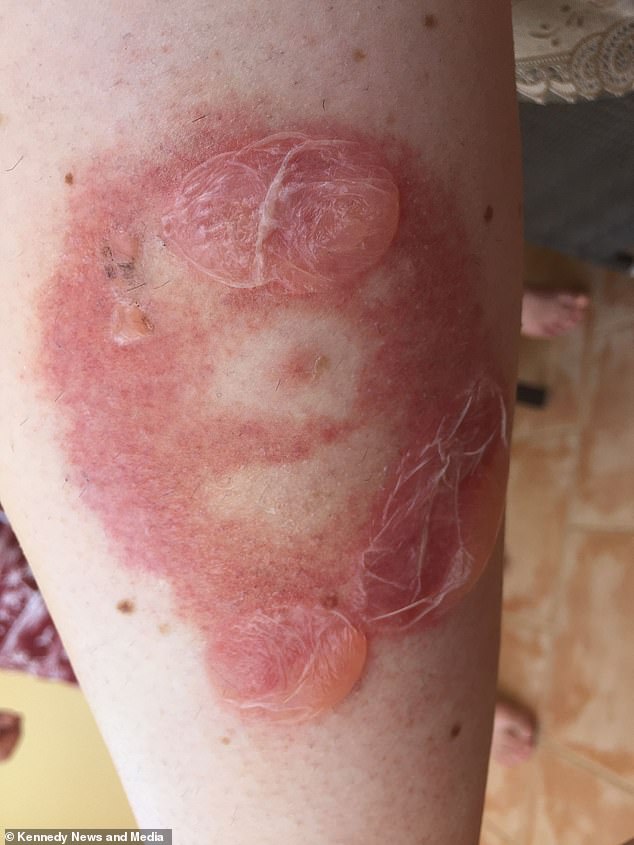 Ms MacFarlane said: ‘I just had to grin and bear it and wait until the blisters popped on their own, and ran down my leg, which wasn’t very nice’

The following month Ms MacFarlane went back to the field to clean out a bath used by Pedro as a water trough and fell prey to another egg-legged terror who bit her on her left ankle.

Sally said: ‘I was back at the stables the following month and wearing shorts as it was really hot and I didn’t want to irritate the bite.

‘I was wearing trainers with trainer liners and got half-way down the field, to a different spot, and felt something on my leg.

‘There are a lot of prickly plants in the field so I assumed it was one of those brushing against me but my eldest daughter Charlotte said ‘you’ve got something on your leg’ as I brushed it off.

‘That evening I watched my leg and saw it start going red and my ankle swell up, I thought “oh goodness, here we go again”.

‘I asked my daughter what she saw on my leg. She scrolled through lots of pictures on Google and said ‘that was it’ – it was a false widow spider.

‘As soon as I saw that happening I went straight back to the doctors as I couldn’t cope with red raw blisters again.

‘The doctors said they couldn’t believe it had happened to me again and put me straight back on the cream and tablets, which sorted it out.’

Ms MacFarlane said she found the culprits during a clean-out lurking in the spider-infested stable.

She said: ‘When I was tidying out the shed I found a load of them and took a picture. 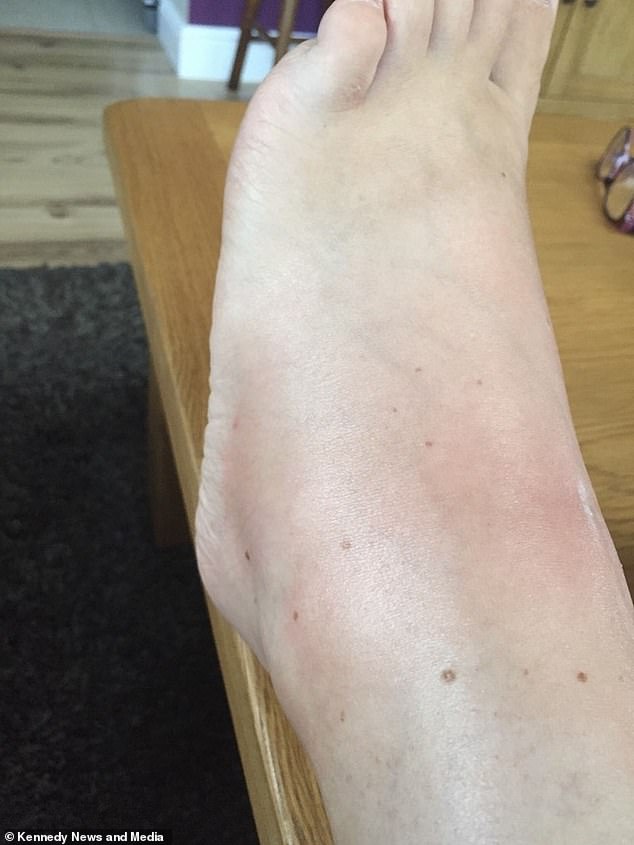 ‘In the stables and sheds you get big spiders, it’s to be expected, and I’m fine with them.

‘After what’s happened if I spot a little spider I’m on edge and kill it just in case.

‘It’s funny that people are scared of big hairy spiders that smile when they look at you when it’s the little ones you need to be looking out for.

‘Since this has happened I’ve moved my horse so it shouldn’t happen again, but I’m still a bit on edge.

‘When I walk through the grass I’m still really paranoid that some killer spider is going to jump out and nibble on my legs again.’

‘I’m still a bit on edge about walking through the grass.’

Ms MacFarlane is urging anyone who gets bitten to monitor it and seek medical attention if it starts to look and feel inflamed.

She said: ‘I’d urge anyone to seek advice if it starts going pink and hot to the touch.

‘Draw a line around it and go and seek some advice.’