Mother, 42, is revealed as Set for Life lottery winner

A mother-of-two who is is celebrating winning £10,000 every month for the next 30 years on the Set for Life lottery thought she’d only won a fiver after using the last £1.50 in her online account to buy the winning ticket.

Vicky Mitchell, 42, from Halifax, triumphed after selecting a lucky dip in the August 12 draw and now hopes to use the money to move from her terraced house to somewhere with more space.

After swigging her winner’s champagne, the administrative assistant at an accountancy firm said: ‘In a million years you never think you’ll win big but this is life changing.’

Vicky Mitchel (pictured on the right with her partner, Adam Fry) used the last £1.50 left in her online account from a previous win to buy a line for the August 12 draw

She said: ‘I pick up lucky dips every now and then for whichever game I fancy. I was heading off to Skegness and so quickly thought to play online.

‘I won £10 on Thunderball which was great and I used that win to buy a ticket for different draws across the next few days.

‘I won again, this time £5 on Set For Life, so I put that back on various draws.

‘It was the last ticket I bought with this win, a £1.50 Set For Life lucky dip for the Monday, that I won on and which has changed my life.’

Ms Mitchell was up early to ensure her eldest son got to work when she saw an email from The National Lottery.

‘I was half asleep when I saw the email and thought “great it’s another fiver”. I couldn’t work it out and see what I had actually won. It said I had to log on.’

When she logged in to her online account, Ms Mitchell discovered she had won £10,000 a month for the next 30 years. 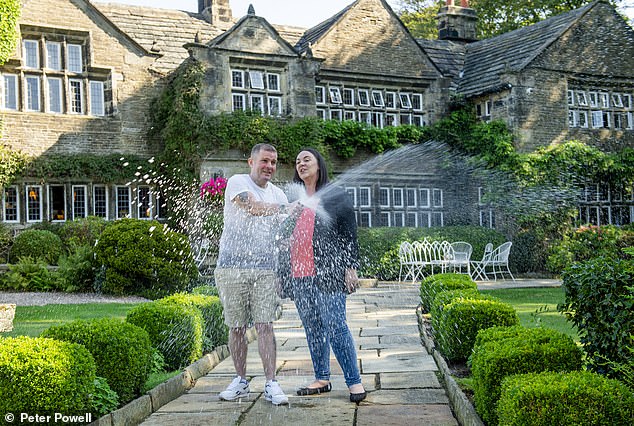 ‘I woke up my partner, Adam, and shoved my phone in his face saying that I’d won the lottery.

‘It was still early so we then had an agonising wait to call The National Lottery line to get it all confirmed.’

Ms Mitchell said: ‘It’s still sinking in but whereas before I would see a jumper for one of my sons and think that I couldn’t afford it, I can now just buy it.’

She hopes to use the money to buy a bigger house.

‘My youngest son needs a bigger garden to boot his football about so we’ll look for somewhere soon,’ she added.

Ms Mitchell plans to carry on working but says the win will make life easier.

‘Adam and I share a car which means I sometimes end up on the bus. Just having my own car will be amazing.

‘I have always wanted to visit Budapest, as it is supposed to be very pretty, so a few city breaks will also go in the diary.’

It comes a week after 19-year-old Sam Lawton bagged the top prize after buying his ticket while sitting in the bath. 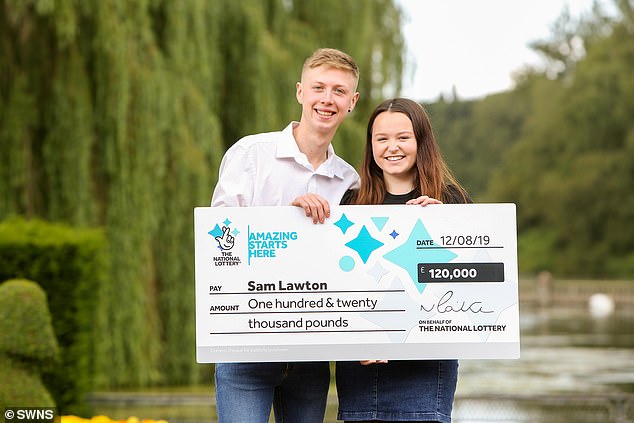 Sam Lawton won Set for Life last week. He is pictured with his partner Connie at Coombe Abbey in Coventry

The data analyst, who lives with his girlfriend Connie Bell, a HR worker, and their one-month-old son, said he would spend the money on a holiday to New York, driving lessons and a deposit for a new home.

He was inspired to play after seeing Dean Weymes, 24, win the same game last month.

The Amazon worker, from Peterborough, said he would use the winnings to help his autistic brother and pursue his dream of becoming a screenwriter.

Set for Life involves players picking five numbers from one to 47 and a Life Ball from one to 10, with prizes beginning from £5 for matching two numbers.

If a player matches five numbers without the Life Ball, they win £10,000 per month for one year.

In the event that a winner dies before all winnings are paid, the cash will go straight to their estate. 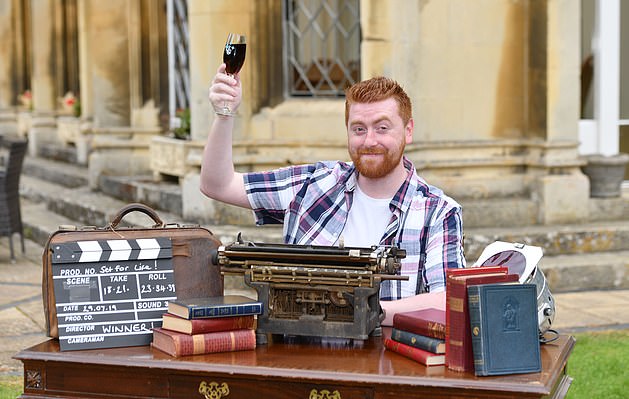 What are the rules for the National Lottery’s Set for Life competition?

The National Lottery introduced its Set for Life competition at the beginning of 2019.

It hoped to reverse the drop in sales, which set in after 2015, when it became harder to win the jackpot.

Camelot’s decision to increase the number of balls from 49 to 59 cut the chance of winning the jackpot from one in 14million to one in 59million.

So it introduced the new ‘annuity’ game designed to pay out over a longer period.

In Set for Life, players pick five numbers from one to 47 and a Life Ball numbered from one to 10.

Prizes start at £5 for matching two numbers. If five numbers are matched without a Life Ball, the winner gets £10,000 a month for one year.

If players match every number and their Life Ball, then they are paid £10,000 a month for three decades.

Should a person die before their time period is up, the winnings are handed to their estate.