Mother, 47, diagnosed with skin cancer INSIDE her breast in ‘rare phenomenon’

A mother diagnosed with a type of skin cancer inside her breast in an ‘exceptional phenomenon’ has blamed it on her implants.

Michelle Miller, from Florida, was pregnant when she noticed one of her breasts was three times the size of normal.

Her increasing pain had for years been put down to capsular contracture – a well-known side-effect of breast implants – but tests revealed a more dangerous truth.

She was diagnosed with squamous cell carcinoma, a common form of skin cancer but which is found inside the breast only very rarely.

Heavily pregnant at the time of her diagnosis in May, Mrs Miller, 47, had both her breasts removed in a double mastectomy to try and get rid of the disease.

Michelle Miller first had breast implants in 1995 and said they started to cause her pain in 2016, after the last operation to replace them, but doctors didn’t take her concerns seriously

‘I began to notice some pain in my breasts three years ago but doctors thought it was due to scar tissue around the breast contracting,’ said Mrs Miller, who first had implants in 1995 and had them replaced in 2000 and 2016.

‘I saw several doctors who dismissed it all as infection, and for a while managed to relieve the symptoms.

‘But when I found a lump earlier this year I had further tests, and the fluid from inside my breast tested positive for abundant squamous cells.

‘My breast surgeon was baffled as she told me squamous cells are skin cells and do not belong inside of my breast.’

Squamous cell carcinoma is the second most common form of skin cancer, according to the British Skin Foundation.

It is usually caused by sun damage to skin cells and tends to appear as a scaly or crusty area of raised, reddened skin, and can usually be surgically removed.

The types of cells it develops in, however, are also found inside the breast and the cancer can develop there, but it has only rarely been reported by doctors.

A 2008 case report in the World Journal of Surgical Oncology, by doctors at Deventer Hospital in the Netherlands, said: ‘A primary squamous cell carcinoma of the breast is an exceptional phenomenon’.

Another report by doctors from India, published in the Journal of Cancer Research and Therapeutics in 2012, said: ‘Primary squamous cell carcinoma of breast is [a] mystery which is encountered very rarely.’

Mrs Miller believes untreated complications from her implant replacement surgery in 2016 created the conditions for the cancer to develop. 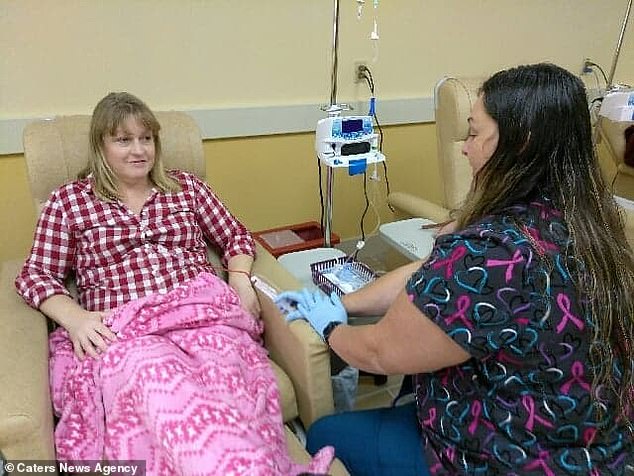 Mrs Miller was diagnosed with squamous cell carcinoma in May and started chemotherapy after the birth of her daughter, Macy, in July 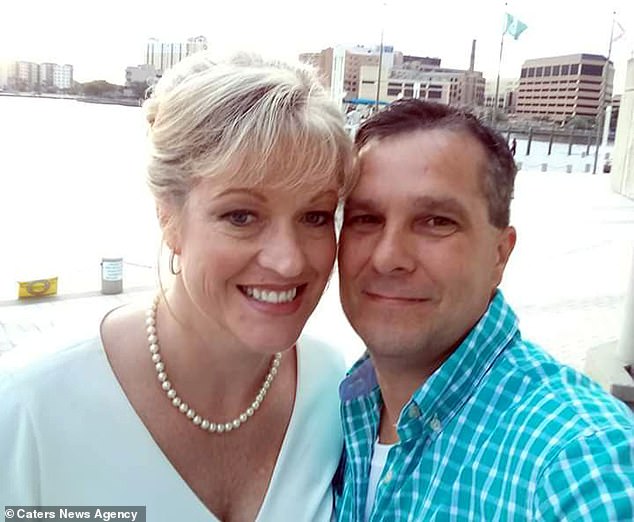 Mrs Miller, pictured with her husband Shawn before her illness, chose to have both her breasts removed to stop the cancer spreading

She believes she had been living with the cancer since that time and said doctors only took her seriously when she got pregnant.

Before then, they told her the discomfort was being caused by the body’s reaction to the breast implants and a development of scar tissue.

‘The breast had become three times the size it should have been and when I went for my pregnancy check-ups, it was immediately obvious,’ she said.

‘I had a six centimetre tumour on my right breast. I was diagnosed on the May 31 and by June 5, I had asked for a full mastectomy.

‘Yet doctors had blamed it on my boob job not healing properly and said it was contracture which had compressed the implants.’ 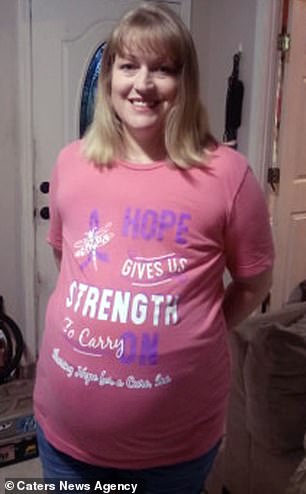 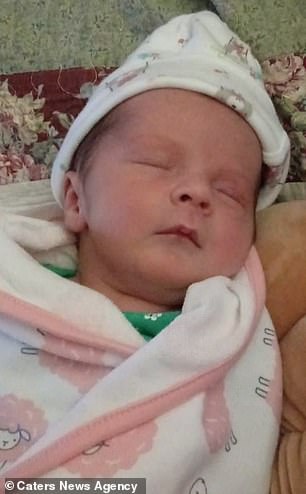 Mrs Miller, who already had four children, was diagnosed with cancer while pregnant with her fifth (pictured left). Macy (right) was born in July this year, by which time Mrs Miller had already had both her breasts removed, leaving her unable to breastfeed 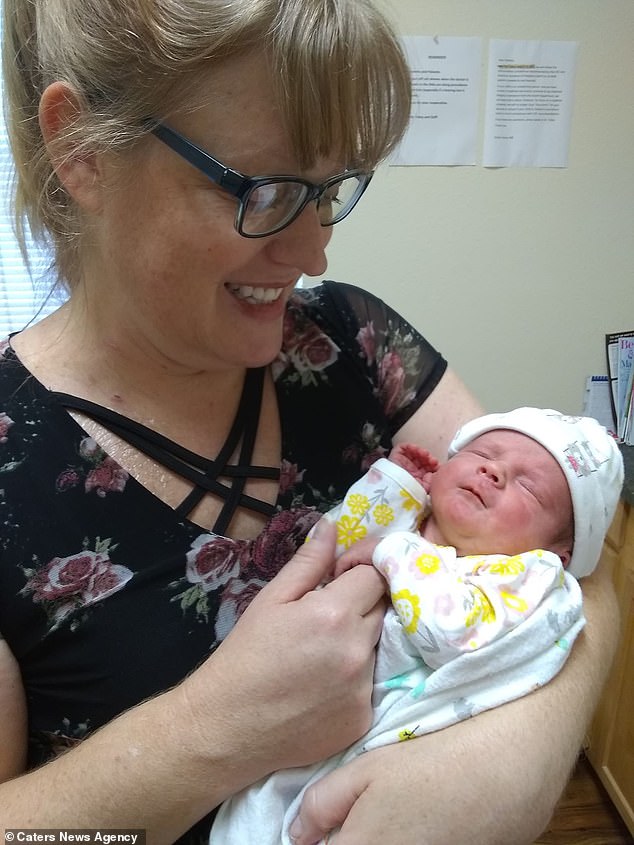 Mrs Miller said she was angry that doctors had taken so long to discover the cause of a pain she had lived with for three years, and now fears her cancer could turn deadly 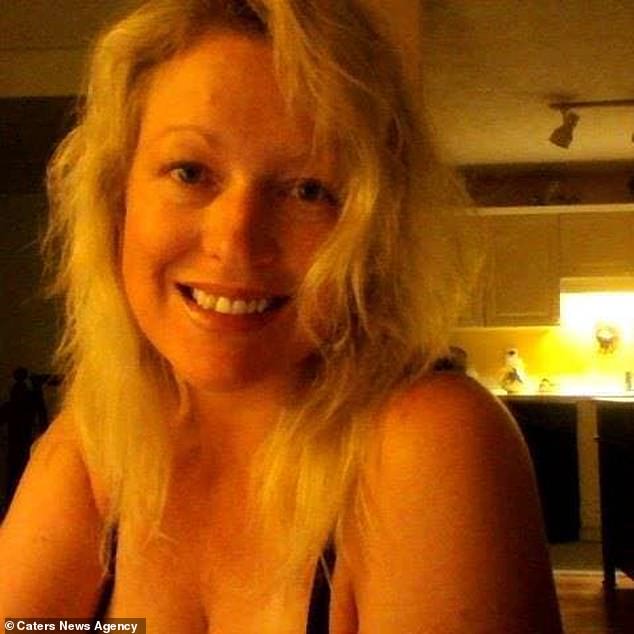 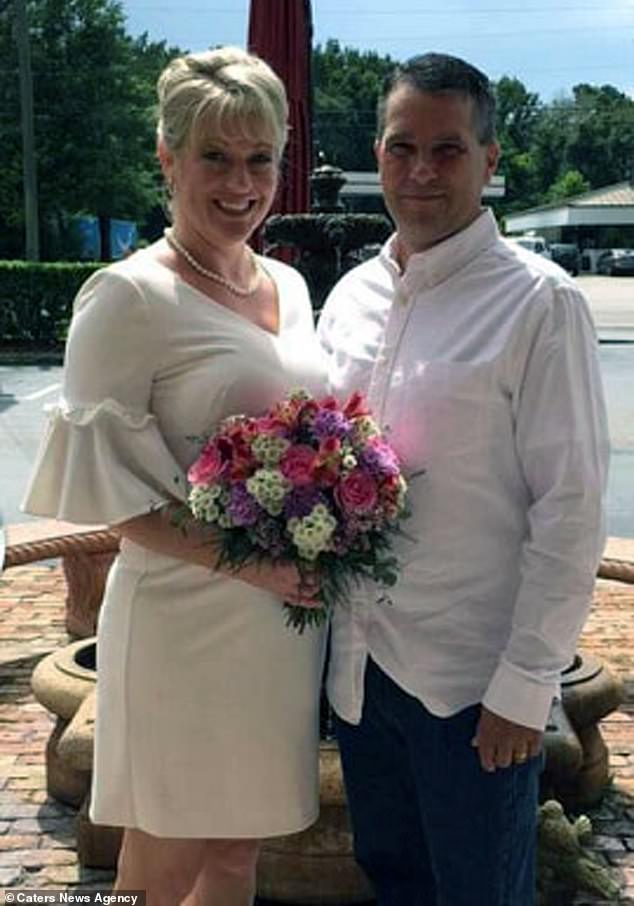 Mrs Miller, pictured with her husband, said she read about other cases in which squamous cell carcinoma inside the breast had killed the women who got it

Mrs Miller, who said she read about only four other cases in which women were diagnosed with the same condition, is afraid the disease could be deadly.

She added: ‘Three out of the four documented cases the same as mine have passed away, and it makes me so nervous.

‘It makes me angry that I wasn’t listened to earlier and that my concerns were dismissed as only the contracture from the implant.

‘This contracture formed the capsule of scar tissue which enabled the cancerous cells to grow.

‘I now won’t be able to breastfeed for my new baby, and am looking at a future of uncertainty.’

Squamous cell carcinoma (SCC) is the uncontrolled growth of abnormal cells in the upper layers of the skin.

It often looks like scaly red patches, open sores, elevated growths with a central dip or warts, all of which may crust or bleed.

They can become disfiguring or life-threatening if allowed to grow.

More than one million people are diagnosed with SCC every year in the US. Its UK prevalence is unclear.

SCC is mainly caused by overexposure to UV light from the sun or tanning beds.

People are more likely to suffer if they: 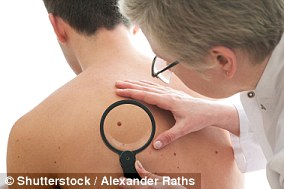 Although SCC can occur anywhere on the body, it is most common on areas exposed to the sun, such as the face and hands.

SCCs spotted at an early stage and removed promptly are mostly curable and cause minimal damage.

Treatment typically includes surgery to remove the growth, as well as radiotherapy and topical drugs.

People can reduce their risk of developing the disorder by: