Mother, 49, loses leg in a freak accident which caused her shin to ‘explode’

A mother lost her leg to a life-threatening infection after surgery for a freak accident in a car park led to it exploding with pus.

Helen Way, 49, broke her knee by overstepping a kerb in the car park and had metal plates put into her leg after emergency surgery.

But the mother-of-one from Trowbridge, Wiltshire, had to return to hospital a month later when the scar began ‘weeping’.

She heard a popping sound and the infected scar erupted, continuing to ooze with pus for an entire night while she waited for surgery at Bath’s Royal United Hospital.

Doctors attempted to save Helen’s leg by carrying out 12 surgeries but it was ‘too damaged’.

Relatives feared for her life when her organs began shutting off as a result of the infection.

After weeks of operations taking parts of her leg off, she made the painful decision to have the whole amputated to stop the infection spreading further.

Helen Way (pictured), 49, from Trowbridge, Wiltshire, had to have her leg amputated after suffering from sepsis 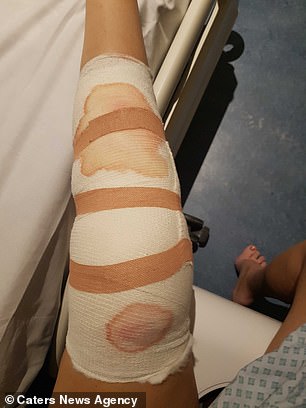 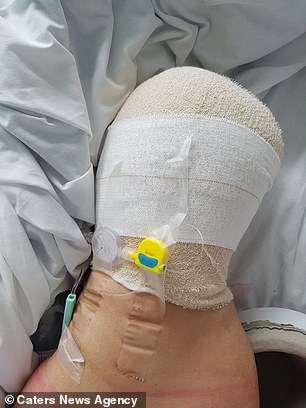 Former business owner Helen said: ‘It was a freak accident as my knee broke in half from overstepping in November 2019.

‘The doctor said I did a “spectacular job” as I needed plates and screws to repair it.

‘I spent 10 days in hospital but when I was discharged, I noticed the scar was weeping.’

Helen was prescribed pain killers as her leg began to feel like it was burning. It was swollen and progressively getting worse.

WHY DID HELEN’S LEG ‘EXPLODE’?

The ‘explosion’ in Helen’s leg while she waited for surgery was caused by a sepsis infection.

The scar left by her surgery for her broken knee became infected.

Infected wounds can fill with pus or cloudy, green or foul smelling liquid, which can pop after the build up becomes to high.

On December 13, she told doctors during a fracture appointment about her sickness and fever.

She said: ‘I was worried and concerned about my health as I was vomiting and hadn’t eaten for a week.

‘I was unable to touch my leg and had a fever. A blood test revealed I had a serious infection and I was blue lighted to the hospital.

‘As I was sat there, I felt a pop and a sudden release. My lower leg exploded — it was disgusting.

‘It was oozing with blood and puss all night whilst I waited for surgery in the morning.

‘The bed was wet, it was absolutely foul.’

Despite multiple surgeries to clean the wound, it continued to bleed. During this time, Helen had become delirious and was diagnosed with florid sepsis.

Sepsis is an immune response to an infection that is the number one cause of avoidable deaths in the UK, killing 44,000 a year, and is usually caused by an infection in the blood. In this case it is not clear what caused Helen’s infection.

Her condition was critical and she was put into intensive care as her organs began shutting down.

‘I was in ICU for 18 days. It was there that it was also discovered that I had a rare drug interaction called Pyroglutamic acidosis — which was also contributing to my critical condition.

‘As soon as this was diagnosed they were able to start treating me correctly and further operations were more successful.

‘Unfortunately there was damage to the cartilage, partly due to the tear.

‘But my leg required cutting away due to the infection, meant that amputation was my only option.

‘It was a combination of everything that had happened, not just sepsis.

‘I barely remember a thing about that time due to delirium apart from the terrifying paranoia and hallucinations.

‘My family thought they were going to lose me but somehow I pulled through.’

During her time in ICU, Helen had five blood transfusions. She was moved onto a ward in January and she compares her leg to a ‘leg of lamb’.

She said: ‘The surgeon said I need to consider an amputation but the damage was already done.

‘For me, it was a no brainer as I could either live my life in pain with poor mobility because my knee was severely damaged — or have it off and start again.

‘I was happy for them to take it away rather than hack at my other leg and body. I didn’t want to be turned into Frankenstein’s bride.’

She said: ‘It has been hard, but I am a positive person.

‘I wouldn’t have been able to get through this without my incredible partner Andy, daughter Jess and my mum.

‘They have been my rock. I am lucky to have supportive friends and family.

‘I’ve faced some challenges and my independence has been altered but I am determined not to be defined by my disability.’ 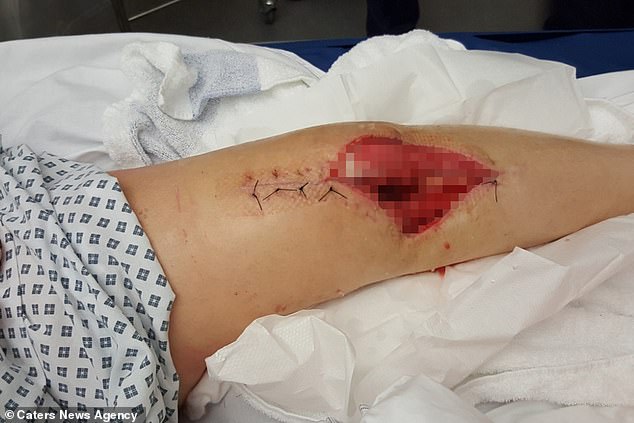 Helen’s leg was covered in foul-smelling pus after the infected wound exploded. Pictured: Her leg after the explosion

Medical negligence lawyers at Irwin Mitchell are now investigating whether her care was satisfactory and if the amputation could have been avoided by earlier intervention.

Elise Burvill, a lawyer representing Helen, told the Wiltshire Times: ‘We sadly see many people who have had their world turned upside down by sepsis and who struggle to cope with the impact it has on their everyday life.

‘Despite the terrible ordeal Helen and her family have been through, she continues to show bravery and courage as she comes to terms with everything.

‘While nothing can make up for what’s happened to Helen, we’re determined to support her by ensuring she has access to the specialist care and therapies she needs to continue her recovery and make the most out of life.’