Two beauty therapists face jail after grabbing a mother by the hair and smashing her head against a metal pole after her five-year-old daughter took the last seat on the Tube.

Renata Regin, 50, and her daughter Sophia Elsden, 25, were foaming with rage when they were forced to stand on their Jubilee Line journey, a court heard.

And they are also claimed to have flipped out at the mother’s eldest girl, nine, who they branded ‘disgusting’ for allegedly kicking her legs while sat on her parent’s lap.

Renata Regin, 50, (right)and her daughter Sophia Elsden, 25, (left) were foaming with rage when they were forced to stand on their Jubilee Line journey, a court heard today

After Elsden got into the child’s face to warn her to ‘watch your mouth’, she suddenly clenched a clump of the mother’s hair, wrapped it around her fist and pulled her skull into one of the railings, City of London Magistrates Court was told.

The screaming mother, 35, who cannot be named for legal reasons, suffered a savage onslaught from both women, and watched in horror as Regin wrenched her nine-year-old’s hair.

Regin, of Searles Drive, Docklands, and Elsden, of Union Street, Torquay, have been convicted of assaulting the mother.

Regin alone was found guilty of assaulting the nine-year-old. 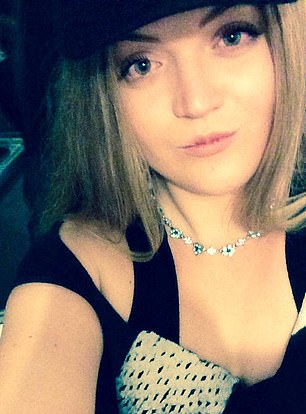 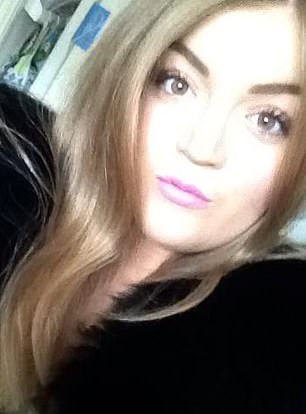 After Elsden (pictured) got into the child’s face to warn her to ‘watch your mouth’, she suddenly clenched a clump of the mother’s hair, wrapped it around her fist and pulled her skull into one of the railings, City of London Magistrates Court was told

The victim mother was returning with her two girls and 65-year-old father from Portobello Road Market in October 2018 when she suffered the violent episode.

Describing the nightmare journey she told the court: ‘I had asked the older one (Regin) to move her bag, which was in front of me, so my daughter could sit on my lap, but then she started saying: “Look at her legs, look at her legs.” They were making loud comments about us.’

She went on to explain how she confronted the Regin and Elsden, asking: ‘Is there a problem?’

From behind a screen in the court, the mother said: ‘The younger one (Elsden) grabbed my hair, wrapped it around her hand and pulled my head back and forth, bashing it against the pole.’

‘I had a sore head at that point, but could only focus on my children. People on the tube were screaming at the ladies to stop.’

In his account, the grandfather told the court: ‘The older woman (Regin) moved towards the free seat, but my youngest grand-daughter shot into it.

‘The nine year-old was on my daughter’s lap and I could hear them saying: “Disgusting child” and “Look at her feet, disgusting.”

‘The older one said: “Yes, I’ve got a problem with your child. She’s disgusting,” and the younger one said “Yes, she is disgusting.”

‘The younger one got into my grand-daughter’s face and said: “You’d better watch your mouth child,” and then grabbed my daughter’s hair and smashed her head into the railing. 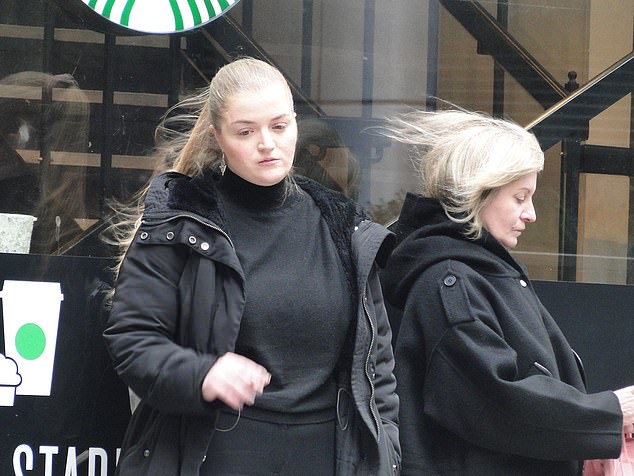 Regin (right), of Searles Drive, Docklands, and Elsden (left), of Union Street, Torquay, have been convicted of assaulting the mother.

‘They were both attacking her at one point and the older one said: “I’m going to kill you, I’m kill to kill you.”

‘My youngest grand-daughter was crying and screaming her head off and when her sister stood up the older lady grabbed the nine year-old’s hair and pulled her head back.

‘The violence came from nowhere. It was like an explosion of violence. Everyone was in shock due to the extreme violence.

‘They were attacking my daughter and my grandchildren and at one point I did hit the older one with my fist, with restraint, with minimal force to the side of her face to get her to stop the attack.

‘The older one then swaggered over and did a high karate-style kick to try and take my head off and I hit her a little harder into the face.

‘I’ve never seen people lose their tempers as quickly as that.’

Regin told the trial trouble began when she scolded the mother about the way her children were behaving.

She said: ‘A seat was available next to the woman and I was about to take it, but was kind of pushed because the girl jumped on the seat.

‘The girl on the woman’s lap was moving her feet, her legs were in the air, you could feel them and I told her it was not the way to bring children up.’

She claimed the mother then became aggressive towards her daughter and as she tried to protect her was attacked by the granddad.

‘All of a sudden I felt a blow to my chin and I tried to kick the man in the groin. I was shocked, hurt, humiliated and was then elbowed on the side of my throat and gasped for air.

‘I didn’t pull any child’s hair, I didn’t touch the children. They are fabricating the story to protect the grandfather.’

Elsden, who says the distressing incident prompted her move to Devon, said: ‘I pointed the seat out to my mum and as she was about to sit down the child pushed and rushed across to sit down next to her mother.

‘My mother did say the child pushed past with no regard and the parents should bring them up better and then the woman said: ‘Do you have a problem?’ and continued to taunt my mum.

‘The lady then came towards me with her arms out, aggressively and the grandad hit my mum under the chin and she fell back into two guys.’

Both Regin and Elsden were bailed until February 14 for pre-sentence reports.