Mother, 51, suffered severe headaches after developing a milk intolerance from the MENOPAUSE

A mother-of-one suffered pain so severe it ‘felt like her skull was being crushed’ after the menopause triggered a milk intolerance.

Maggie Holloway, 51, of Ayr in Scotland, endured ‘horrendous’ headaches for eight months, which doctors dismissed as an inner ear infection that would pass.

When her discomfort did not go away, a specialist said the ‘change of life’ may have triggered hormonal changes that left her intolerant to milk.

After doing an at-home intolerance test, the former primary school teacher discovered she was also intolerant to eggs, yeast, beef and chickpeas – which made up most of her day-to-day diet.

Just five days after cutting out these ‘trigger foods’, Mrs Holloway’s symptoms had almost completely vanished, with her being back to her old self ten days later.

It comes after the hot topic was brought to light by TV journalist Mariella Frostrup in last night’s BBC documentary The Truth About Menopause.

Maggie Holloway (pictured with her daughter Ava and husband Edd) suffered pain so severe it ‘felt like her skull was being crushed’ after the menopause triggered a milk intolerance. Hormonal changes from the ‘change of life’ also left her intolerant to yeast, beef and eggs

Speaking of her symptoms, Mrs Holloway, who lives with her daughter Ava and husband Edd, said: ‘I was feeling nauseous, lightheaded and had this terrible pain in my inner ear. It felt like someone was crushing my skull.

‘It was just the most horrendous pain. As time went on it wasn’t getting better, it was getting worse.’

After finally being referred to a ear, nose and throat specialist, tests revealed Mrs Holloway’s sinuses were blocked with mucus that had spread into her inner ear.

Dairy contains molecules called casein that trigger the secretion of mucus. In those with an intolerance, mucus can accumulate in the sinuses and be painful.

CAN THE MENOPAUSE TRIGGER FOOD INTOLERANCES?

The NHS does not recognise the menopause as a cause of food intolerances and allergies, however many experts, as well as women going through ‘the change’, are convinced the two are linked.

Professor Ashley Grossman, an endocrinologist at Oxford University, claims scientific research into how  hormonal changes in mid-life lead to allergies is lacking.

But, she added: ‘You can develop allergies such as hay fever and asthma later in life and the change in oestrogen levels during the menopause may be related.

‘In women the fall in oestrogen is dramatic and can cause a flare-up of a variety of different things.

‘For example, migraines can often occur, as well as asthma.’

Holly Shaw, a nurse adviser at Allergy UK, previously told MailOnline that although there are no clear statistics, anecdotally speaking, midlife allergies are on the rise.

‘Allergies can occur during significant hormonal fluctuations such as adolescence, childbirth years and around the menopause, even when someone has been exposed to a particular allergen for decades,’ she said.

‘Some women even suffer severe allergies during their menstrual cycle alone, so it’s clear hormones have an impact on allergic reactions.

‘In menopause the lack of oestrogen and alteration of the gut microbiota can drive changes that can lead to the development of food insensitivities, inflammation and autoimmune diseases.’

A milk intolerance is different to a lactose intolerance. It occurs when the body reacts negatively to the dairy protein.

Mrs Holloway told the medic she had also been experiencing indigestion and abdominal pain, which she put down to the perimenopause – when the ovaries gradually start to make less oestrogen.

‘The specialist said he thought it was down to a food intolerance and it had been brought on by the hormonal changes I was going through,’ Mrs Holloway said.

‘I was quite delighted in a way because I was thinking it could be all sorts of awful things, as you do.

‘I’ve never had food intolerances, ever, and I had no reason to suspect it.’

After being offered medication to ease the pain, Mrs Holloway wanted to get to the root of the problem and tried the at-home food intolerance test YorkTest Laboratories.

‘I didn’t want to be on medication forever, I wanted to find out what was actually causing the problem,’ she said.

‘I took the test, sent off the sample and the results came back on the day I was leaving to go on a Disney cruise.’

Mrs Holloway’s triggers foods made up much of her diet, with her having milky porridge for breakfast, an omelette for lunch and whey protein shakes throughout the day.

Armed with her test results, she set off on the cruise determined to ditch the problem foods from her diet.

‘Within five days of cutting out the foods my symptoms had pretty much cleared up. Certainly within a week-to-ten days they were gone,’ Mrs Holloway said.

‘By the time I came off the cruise I was back to normal. The proof was in the pudding.’

Once home, Mrs Holloway initially struggled to cut key foods out of her diet and hopes to one day be able to reintroduce them.

‘It was tough because yeast especially is in everything, even things like stock cubes,’ she said.

‘Dairy has been difficult to cut out too because I used to love cheese. But there are plenty of alternatives out there.’ 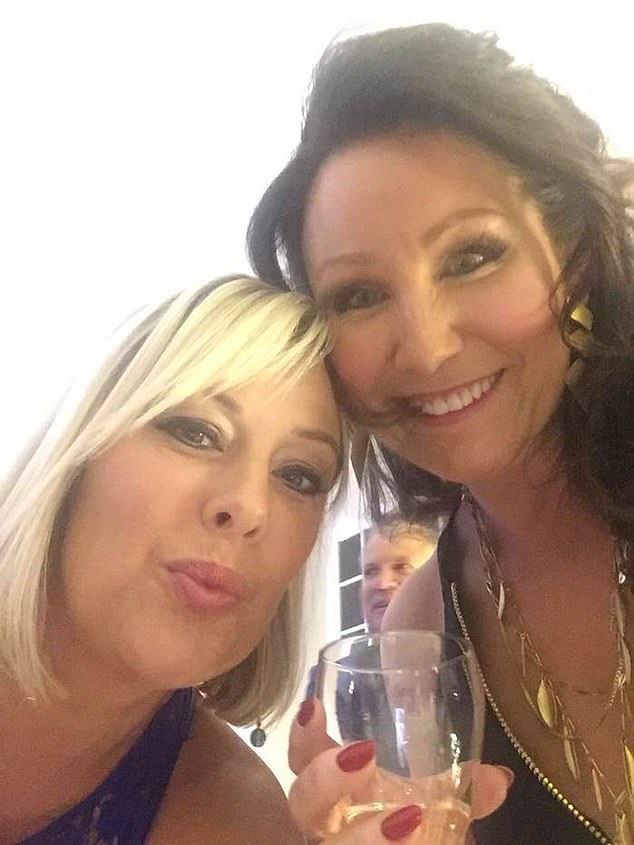 Pictured with her friend Kay, doctors dismissed Mrs Holloway’s headaches as an inner ear infection that would pass. When the discomfort had not eased eight months later, she saw a ENT specialist, who found mucus was blocking her sinuses and had spread to her ear

Mrs Holloway claims sceptics have put her radical improvement down to a ‘good holiday’, but she maintains she feels better than ever.

‘Any time I have had any of the foods, say for example I’m going to a friend’s for dinner and I don’t want to cause a fuss, the symptoms start to come back. I start to get the familiar pain and feel lightheaded,’ she said.

Now pain-free, Mrs Holloway is back to living her active life and no longer relies on ‘Rennie’s every night’.

Mrs Holloway, who runs a theatre production company specialising in classical children’s literature, added: ‘My GP was sceptical but I can only say, in my experience, it’s certainly worked for me.’ 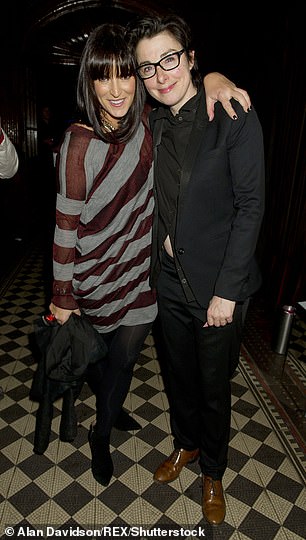 ‘In menopause the lack of oestrogen and alteration of the gut microbiota can drive changes that can lead to the development of food insensitivities, inflammation and autoimmune diseases.’

It comes as TV presenter Anna Richardson, who has fronted Supershoppers and Naked Attraction, mistakenly put the tiredness, brain fog and thickened middle she endured for three years down to the menopause.

The 48-year-old, who is in a relationship with former Bake Off host Sue Perkins, 49, even found her symptoms got worse with ever-increasing doses of HRT.

After insisting on more tests, Anna was finally diagnosed with an underactive hormone, which causes many of the same symptoms.

Simon Pearce, a professor of endocrinology at Newcastle University, said there is a ‘strong overlap’ between the two conditions.

‘Some women may not be menopausal at all, whereas others may have an underactive thyroid gland as well as being menopausal,’ he said.

Despite her symptoms, Anna has even described her diagnosis as a ‘relief’ due to the stigma that surrounds the menopause.

‘When you say to people: “Oh, I’m perimenopausal, I’m on a (HRT) patch, but I don’t feel great,” they roll their eyes as if you’re just lazy. It’s a relief to be able to say I have a thyroid problem,’ she said. 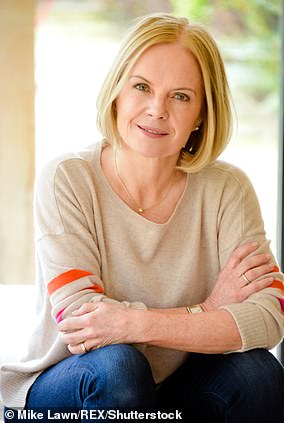 Presenter and journalist Mariella Frostrup is well aware of the side effects of the menopause having endured everything from anxiety and brain fog to insomnia since she started the ‘change of life’ at 51.

Now 56, Mariella relies on a cocktail of hormones every day to manage her debilitating symptoms.

‘Every morning I squirt oestrogen gel onto the inside of my thigh or upper arm. There’s a lower risk of blood clots if it’s delivered through the skin rather than orally,’ she said.

‘At the end of the day, I further boost my depleted hormone levels with a progesterone tablet.

‘Having never really taken much in the way of medicine during my five decades of life, at the age of 56, I’m now a pharmacy of hormone-enhancing products!’

Speaking on last night’s BBC documentary The Truth About The Menopause, Mariella believes stigma around the subject is slowing progress into its treatment and stops women seeking help.

‘The HRT patch I was initially offered didn’t seem an advance on the medication given to my mother for symptoms that occurred at the same stage of life 30 years ago,’ she said.

‘We need to educate girls as well as grown-ups. It’s all very well knowing about periods, but schools ought to address the menopause as well.’