A mother is risking jail by importing an illegal drug she believes will give her terminally-ill daughter a hope of surviving.

Sandra Munford, 53, from Kilmacolm, Renfrewshire, spends £1,300 a month shipping cannabis oil from overseas to treat Kate, 21, who has been given just three months to live.

Kate was diagnosed with a grade three astrocytoma, a form of brain cancer, in March 2016 and has endured four major operations, as well as gruelling chemo and radiotherapy sessions. Doctors say they have done all they can.

When her daughter became unable to walk or talk, Ms Munford took the drastic decision to break the law for the first time in her life by importing cannabis capsules from Canada, where they are legally produced for medical use.

Within five weeks of taking just one marijuana capsule a day, Kate regained movement in the right side of her body and her drooping mouth improved.

Ms Munford is speaking out to encourage a change in the law that makes cannabis products for medical purposes more easily available.

The nutritional supplement cannabidiol is derived from cannabis and is legal in the UK, however, Kate’s treatment also contains THC, which is what makes users ‘high’ and is not permitted.

Cannabis is a class-B drug that carries a maximum sentence of up to five years in prison if users are caught in possession.

Sandra Munford is risking jail by illegally importing cannabis oil, that costs £1,300 a month, to treat her terminally ill daughter Kate, 21, who doctors say has just three months to live 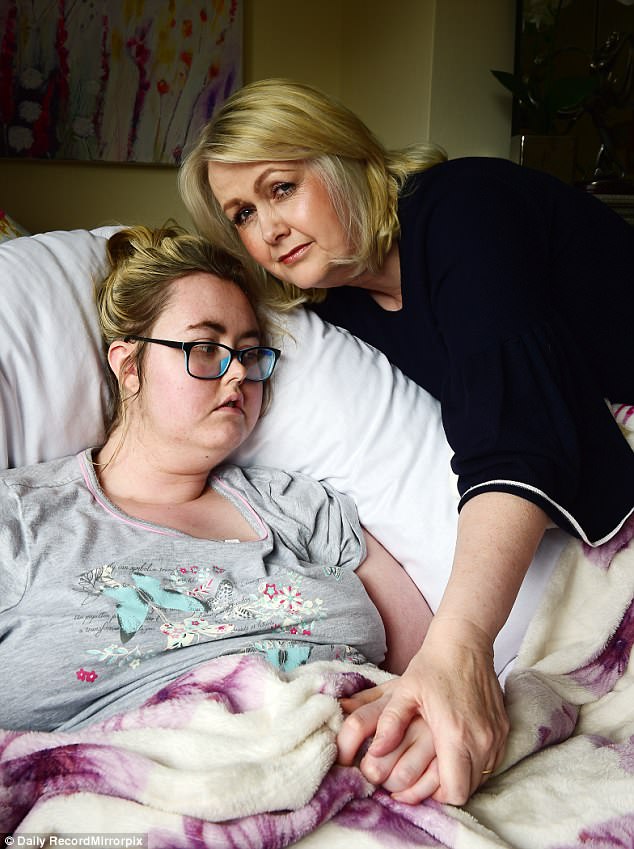 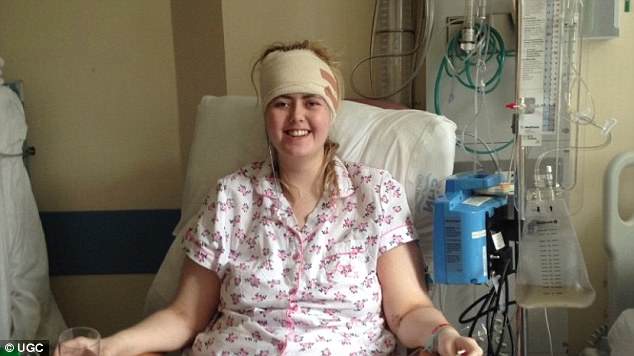 Kate (thought to be pictured before her condition became terminal) has an advanced brain tumour and has endured four surgeries, as well as gruelling chemo and radiotherapy sessions

‘This is our last hope’

Ms Munford, who is also mother to Beth, 19, told the Daily Record: ‘I’m willing to do whatever it takes to ease Kate’s pain, even if it means going to prison.

‘My daughter is dying and I’m in a desperate situation.’

‘We’ve tried every other treatment available and nothing has worked – this is our last hope.’

Caring for Kate, whose father Brian died of a heart attack aged 41 in 2010, has left Ms Munford unable to work and, having used most of her life savings importing the cannabis oil, she may have to sell their family home.

Ms Munford insists any mother in her position would do the same, particularly after seeing the benefits just one capsule a day is having on her daughter’s condition. 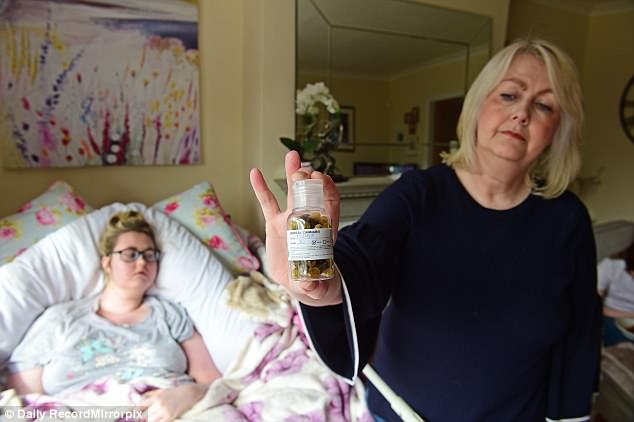 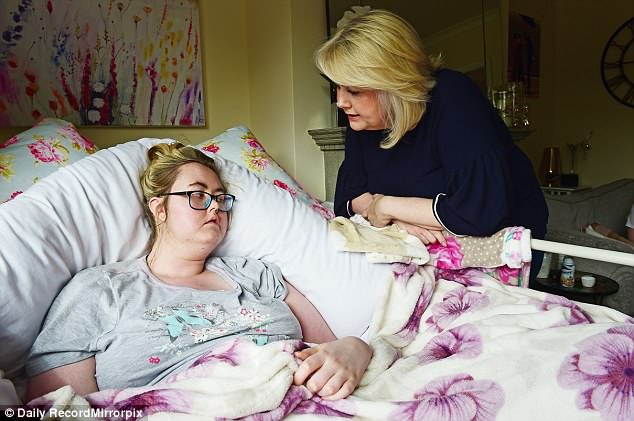 She adds she will do ‘whatever it takes’, saying cannabis oil is the family’s ‘last hope’ 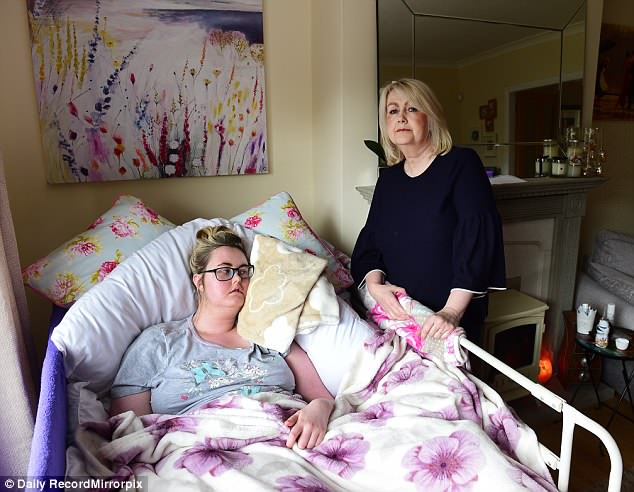 Within just five weeks of taking on capsule a day, Kate regained movement on one side

After being diagnosed with a brain tumour, surgeons removed 80 per cent of the growth, along with four litres of fluid.

Yet, within months, the mass grew back, with Kate taking a turn for the worst last November.

With Kate’s family doubting whether she would pull through and conventional treatment failing to ease her condition, they turned to medical cannabis.

Keen to see a change in the law, Ms Munford argues cannabis oil is safer than many other drugs that can be found in the average person’s bathroom cabinet.

Although human research is limited due to the drug being illegal, anecdotal evidence shows cannabis slows tumour growth, he adds.

A spokesman for the campaign group End Our Pain adds denying people medicine that could benefit them is ‘cruel’ and being driven to illegally import treatments does not make patients ‘criminals’. 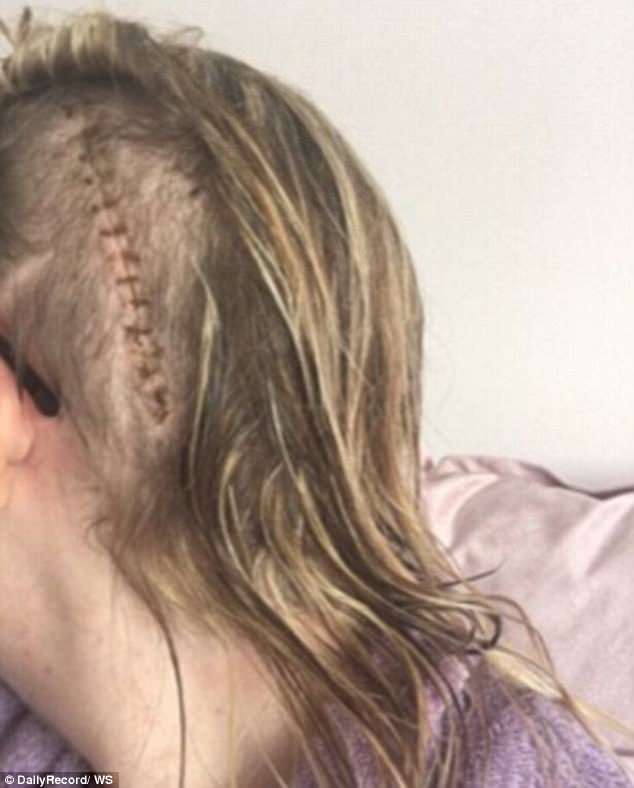 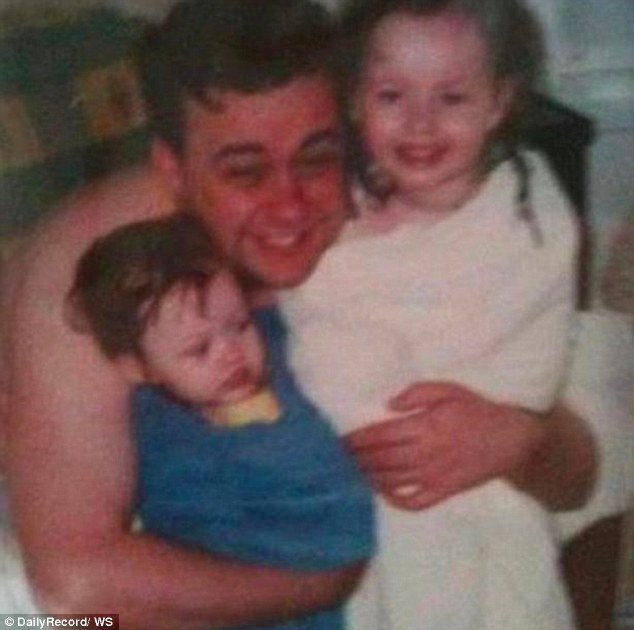 It is the second tragedy for the family after Kate’s (pictured right) father Brian died of a heart attack aged 41 in 2010. Kate’s sister Beth is believed to be pictured left 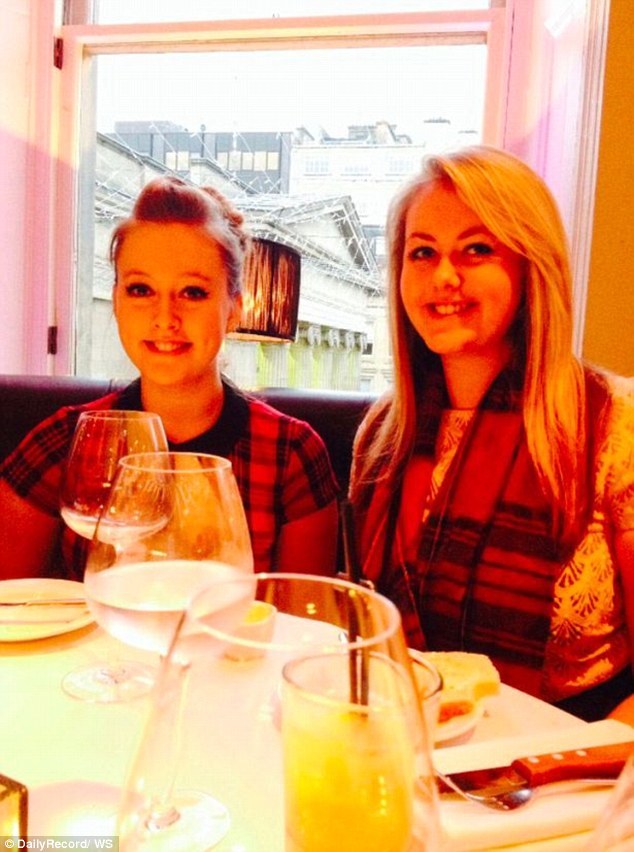 Kate (right) pictured with Beth before she was ill, was diagnosed with cancer in March 2016 after complaining of headaches and double vision. She took a turn for the worst last November 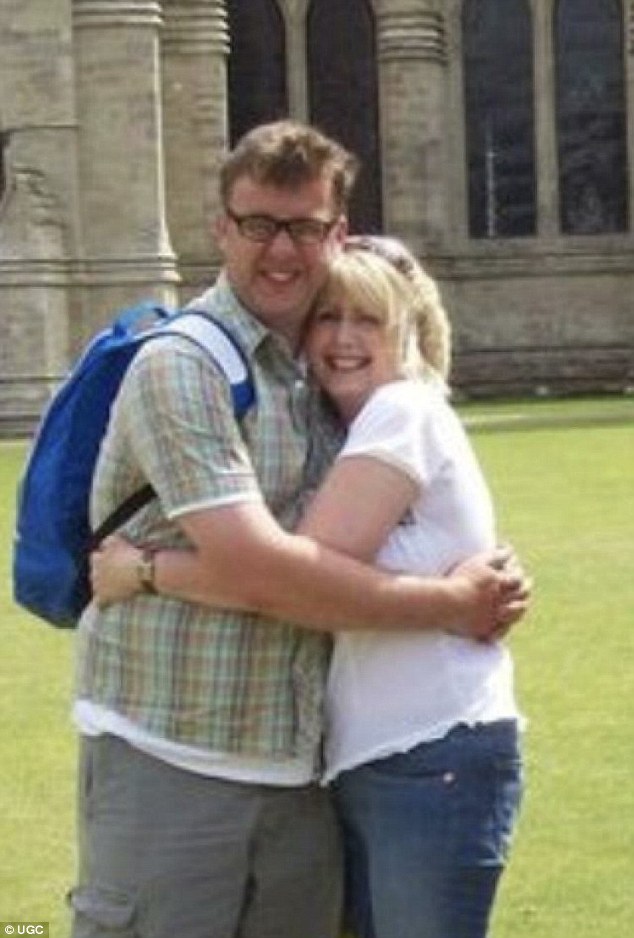 Ms Munford (pictured with her late husband) was forced to give up work while she cares for Kate. She is facing having to sell the family home in order to pay for the cannabis oil

‘People are dying and chemotherapy isn’t curing them’

This comes after a woman claimed last month that cannabis oil ‘cured’ her terminal cancer.

Joy Smith, 52, from Coventry, was given just six weeks to live after being diagnosed with inoperable stomach and bowel cancer in August 2016.

Desperate for a solution, Ms Smith reluctantly took cannabis-based tablets, alongside chemotherapy, after reading about a cancer patient in the US who went into remission after producing her own marijuana oil.

Nearly two years on, doctors, who described Ms Smith as ‘the luckiest woman in the world’, are baffled as her scans show just a small amount of the disease is left in her stomach, which she is confident will disappear with continued cannabis use.

As well as approaching a miracle remission, Ms Smith has also recently won £84,000 after entering a TV competition while ‘under the influence’ of cannabis oil.

She is speaking out to encourage cannabis’ legislation for medical use, saying: ‘I’m a walking miracle. The doctors call me Wonder Woman.

‘Cannabis oil should be legalised for medical purposes – people are dying and chemotherapy isn’t curing them.’

She is believed to buy the oil illegally online.