A working mother who transformed her body through intermittent fasting has revealed how the diet even helped her lose weight without exercising.

Genevieve Davidson, from Sydney, snacked on cheese, chocolate and wine – and enjoyed an ‘occasional’ pizza or pie – but the lifestyle saw her tip the scales at 85kg at her heaviest.

Every year, she would vow her New Years resolution was to lose weight – and she would try every diet imaginable – but to no avail.

She suffered from sleep apnea, high blood pressure, and high cholesterol – and she would find herself out of breath or struggle to find clothes that fit.

But after seeing her brother-in-law dramatically lose half his body weight after embarking on a fasting diet, the businesswoman decided to give it a go. 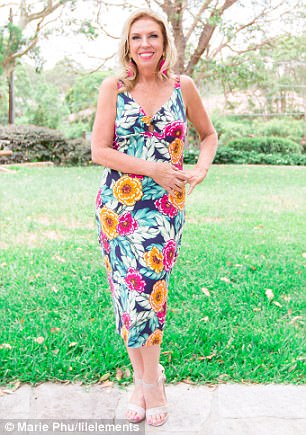 Before and after: Genevieve Davidson transformed her body through intermittent fasting

Speaking to Daily Mail Australia, the now-57-year-old said she notice her weight started to fluctuate when she was in her 30s after the birth of her daughter.

‘I found my weight started going up after having my daughter in my 30s, in fact I was going up a dress size every couple of years,’ she recalled.

‘Even though I worked in the fitness industry, but I found it became more difficult to lose weight as I got older. I would lose weight but struggle to keep it off long term.

‘I knew what to do to lose weight but maintaining the weight was the big issue for me. I yo-yo dieted as I could lose it with a lot of discipline but it would go back up.

‘When I went back to my ‘normal’ lifestyle, in other words, I couldn’t maintain a restrictive eating regimen long term.

‘My GP told me I needed to lose weight but no matter what I tried, I couldn’t maintain it and exercise wasn’t enough.’

Gen described herself as a ‘real foodie’ who enjoyed wining and dining at nice restaurants with her family and friends.

‘I am a real foodie so didn’t want to live on a carrot stick and a lettuce leaf for the rest of my life. I enjoy going out, socialising and I love eating nice food,’ she said.

‘I’m not someone who would pig out but I saw myself as a ‘average eater’. When I went out for dinner, I would order at least two courses.’ 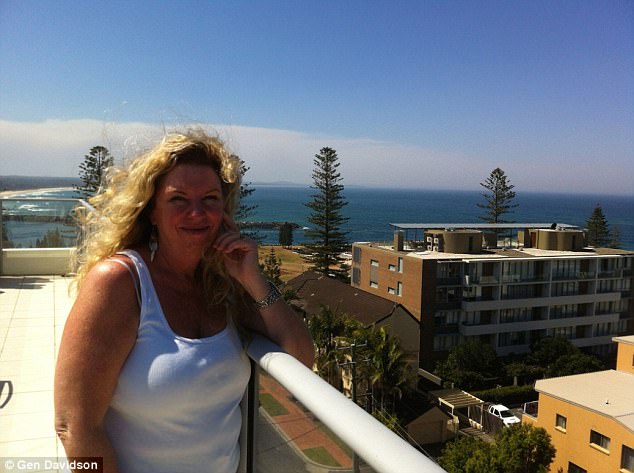 Every year, the Sydney woman would vow her New Years resolution was to lose weight – and she would try every diet imaginable – but to no avail 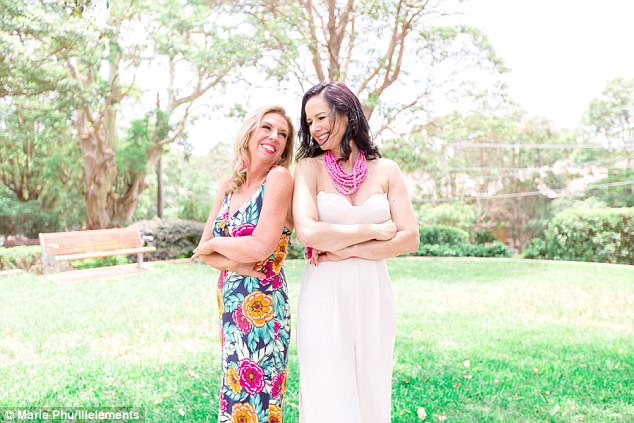 BREAKFAST: Cappuccino with a dash of milk

SNACK: Glass of wine or chocolate

And on top of this, she would treat herself to a small piece of chocolate, chips or a glass of wine after having a home-cooked dinner, which usually includes ‘meat and three veg’.

‘Even though at the time, I thought I was an average eater, the reality was, I was snacking at night. I was eating more portions than what I was admitting myself to.

‘I loved a cheese platter and wine. I would also snack on chips and thought an occasional pizza or a pie was fine. I also would eat a lot of carbs like pasta, rice and bread.

‘I used to think “oh there’s not too many calories in that” – but it all adds up.’

She said her weight also left her felling ‘depressed and ashamed’.

‘But was also in denial,’ Gen said.

‘So I would tell myself I was okay but deep down I knew I was looking very overweight and would be horrified at what I looked like in change room mirrors.

‘I also used to think clothes sizes were inaccurate or they were made too small.’

Then, five years ago, her turning point came after she bumped into her brother-in-law who was half his body weight.

‘I saw him three months after our family Christmas party, and I asked him if he was okay or if he was sick, but he told me he’d never felt better in his life,’ she recalled.

‘He told me he was doing this intermittent fasting so I thought I might give it a go.’ 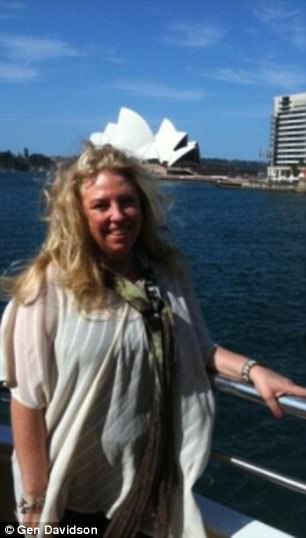 HOW DOES INTERMITTENT FASTING WORK?

One of the main reasons fasting works so well is because you still get to live a ‘normal’ life.

Your lifestyle can still include dining out, enjoying a glass of wine, having your cake, (and yes- eating it too); safe in the knowledge that intermittent fasting is taking care of you.

The approach to intermittent fasting (also known at the 5:2 part-time diet) encourages dieters to cut their calorie intake on two days to 500 calories – and eat normally up to 2,000 calories over the other fives days.

And so, she turned to the ‘diet part-time’ where she fast for two days a week by cutting her intake down to just 500 calories – and ate 1,200 calories on the other five days.

The diet involves skipping breakfast and scheduling all your daily meals within an eight-hour period.

‘I didn’t think I could get through it,’ she said.

‘But after three months, I dropped one-and-a-half dress sizes.’

Astonishingly, she lost 16kg after fasting for eight months without exercising.

‘I also went on two holidays when I wasn’t dieting in that time and went easily back on it. I easily and consistently lost half a kilo a week and sometimes more.’

She also exercised where she would do weight training, waking and yoga.

‘You can do the diet without exercising, but when you do exercise on top of your meal plans, you’re turbo charging yourself.

‘Just stick to the diet and it’ll fall off, everything else follows from there.’

Gen and her friend Victoria Black decided to launch a weight loss business called SuperFastDiet after they saw a market for intermittent fasting.

‘I founded the business as I realised other people didn’t know how to do it and it is easy when you know how,’ Gen explained.

‘I knew you needed motivation as well as diet and knew how to do that. But I researched other methods other than 5:2 and found other easy methods that worked like a charm.

‘So we call it part time dieting as a lot of people think you can’t eat but it’s eating less some of the time so you get eat and drink what you love the majority of the time.’ 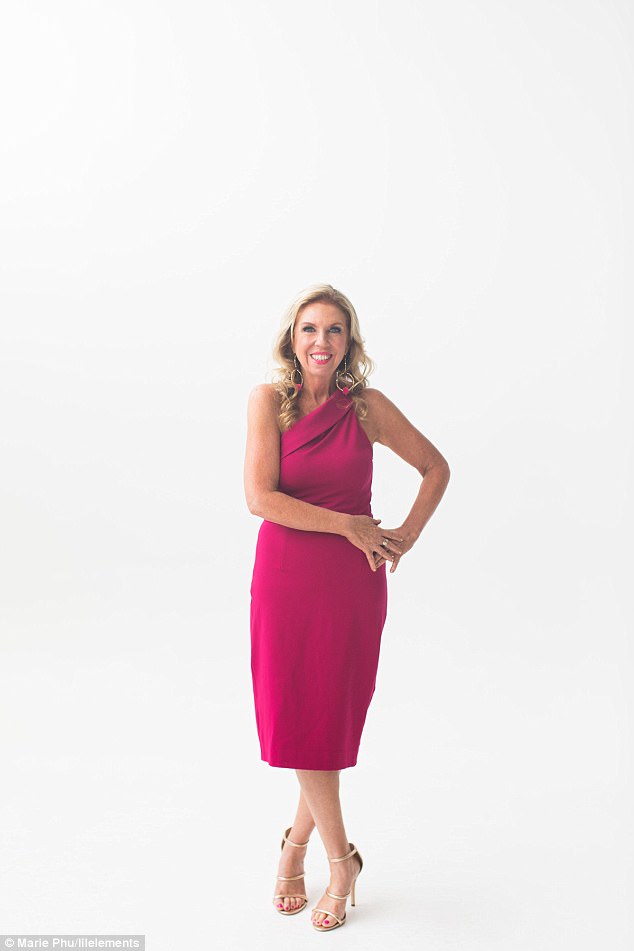 Five years on, Gen said she’s still following the fasting diet, but she can continue to enjoy any food without depriving herself 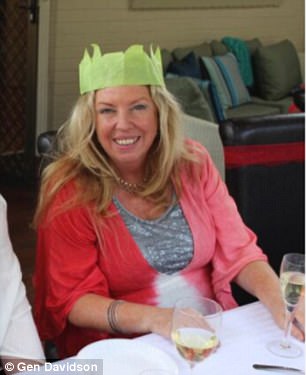 And five years on, Gen said she’s still following the fasting diet, but she can continue to enjoy any food she wants without depriving herself.

‘I am still a foodie. I now know how to have my wine and chocolate and all the foods I love but still maintain my weight,’ she said.

‘On a part time diet day, I start the day with a cappuccino and wait till lunchtime to eat and then have a wrap with turkey or chicken and salad, a piece of fruit for afternoon tea and meat and veges for dinner.

‘I have a serving of potato or carb as well and can still have wine and fruit and chocolate after dinner, so I forfeit breakfast only.

‘I would do this during the week and weekends, I eat out and have breakfast too and as I said, I am a foodie so I don’t deprive myself.’

Since dropping an incredible 30kg, Gen – who now weighs a healthy 53kg, said she feels happier about herself more than ever.

‘I feel so happy that I now got into a small size and can wear so many clothes I would not have dreamed possible. I even wear a swimming costume with confidence now,’ she said.

‘This is the best thing that has ever happened to me and I could not believe how easy the weight came off when nothing else has worked.

‘It’s so easy to do and maintain while still having a life and eating and drinking what I like. I had to share what I know works with others and how to do this.