A woman from Washington state has been accused of shooting and killing her 14-year-old daughter as the teenager desperately tried to call 911 during a domestic disturbance.

Svetlana Laurel, 52, of Kent, Washington has been arrested and charged in the death of 14-uear-old Natalie Gulizia.

Natalie called 911 on Tuesday night to report a domestic dispute between her mother and father as the pair fought downstairs.

But as she was on the phone to the emergency services, her life was cut short by allegedly by her mother who shot her in the head in a moment of madness. 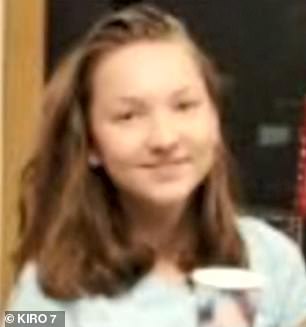 Svetlana Laurel, 52, is suspected of killing her daughter, Natalie Gulizia, 14 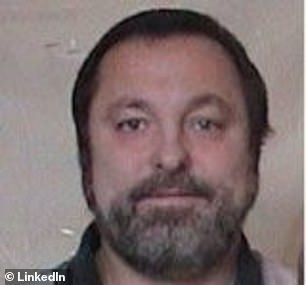 Divorced dad Mike Gulizia, found himself allegedly tasered and zip-tied by his ex-wife as the couple fought over custody arrangements for their two kids

The divorced mom-of-two Svetlana who works at Boeing, was apparently let into the home of her ex-husband’s on Tuesday night by the couple’s 12-year-old son.

When her ex-husband and daughter Natalie returned home, he allegedly found ‘Svetlana was holding a Taser, and used it’ on him.

She is then alleged to have zip-tied her ex and their son.

‘Svetlana drew a pistol’ and told her ex-husband’ she was going to shoot him because he had ruined her life’, court documents seen by KIRO allege. 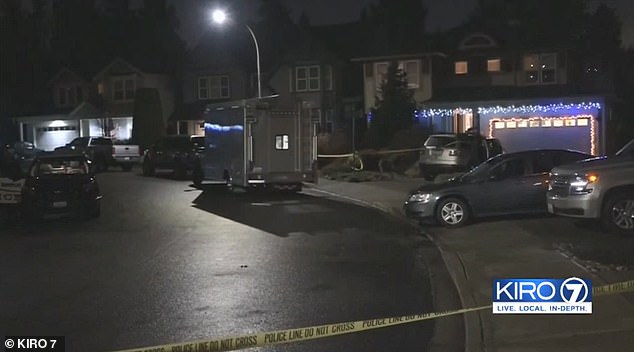 Svetlana was let into her ex-husband’s house, pictured, by the divorced couple’s son, 12

The mother had recently recently lost custody of her children to the father, according to officials and the situation had placed her into a seemingly desperate situation.

The couple’s daughter went into her upstairs bedroom and called police to get help.

‘When the mother found out she was calling 911, she shot her,’ Cmdr. David Leibman of the Renton Police Department said.

The 911 operator could hear a woman saying, ‘You called 911!’ and then heard a woman threatening to ‘blow your head off’. There followed the sound of zip-ties being secured, a loud bang, followed by screaming, according to the police report.

The 12-year-old boy, who was tied up, ‘hopped’ to his sister’s room ‘and saw that his sisters head was covered in blood,’ according to court papers. 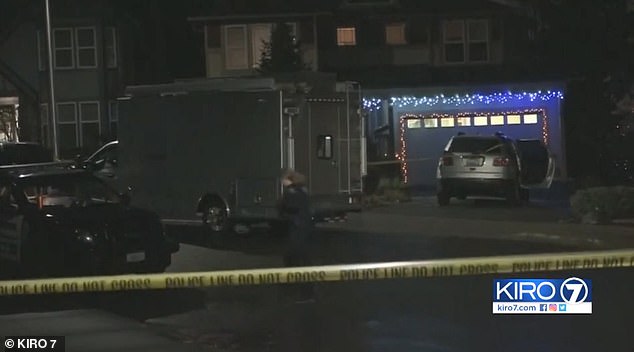 Her ex-husband and daughter arrived whereupon she allegedly tazed him, zip-tied him and then threatened to shoot him 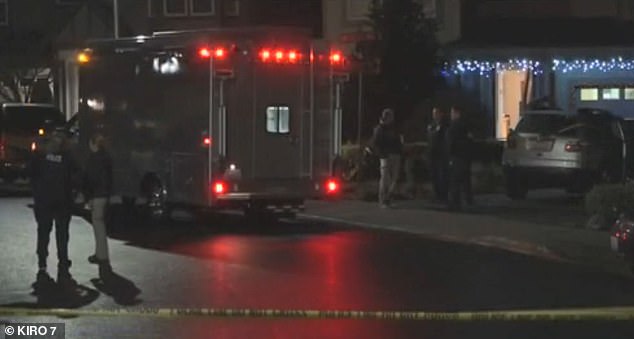 When the mother found out what was happening she allegedly shot her dead. An ambulance is pictured in the street where the husband and his son was living

The children’s father told police ‘he heard the sound of a single gunshot’ upstairs and Laurel went back up to the first floor of the house and tried to shoot him.

‘The gun failed to fire, with Svetlana struggling to clear the malfunction in the pistol,’ court papers detail.

The father then ‘rammed Svetlana into the wall with his shoulder, and was able to grab the pistol.’

‘The gun failed to fire, with Svetlana struggling to clear the malfunction in the pistol,’ court papers said. The man then ‘rammed Svetlana into the wall with his shoulder, and was able to grab the pistol.’

Laurel was originally booked on suspicion of second-degree murder but it is likely the charge will be escalated to first-degree murder.