A mother-of-one accused of slashing a prostitute’s face because she suspected her boyfriend had paid her for sex in a red light district has been cleared of all charges.

Shazia Hussain, 27, was arrested amid claims she confronted and attacked 25-year old Denisa Margean with a kitchen knife after texting her partner, Ian Jones, accusing him of sleeping with a sex worker.

But at Manchester Crown Court, Hussain, from Didsbury in Manchester, claimed Miss Margean had been attacked by her own boyfriend before he turned on her. 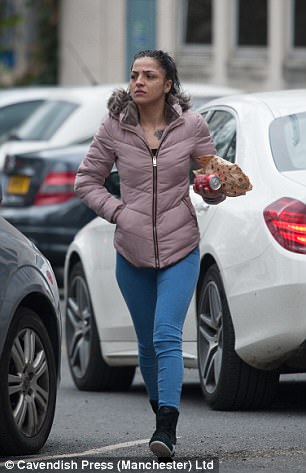 Shazia Hussain, 27, pictured left, was arrested amid claims she confronted and attacked 25-year old Denisa Margean, right, with a kitchen knife after angrily texting her partner Ian Jones accusing him of sleeping with a sex worker when he should have been with their son

She wept and sobbed ‘thank you’ to the jury as she was cleared of wounding with intent to cause grievous harm.

The incident occurred on September 20 2017 after Romanian-born Miss Margean, who lives in Oldham, claimed she was attacked while working on a back street in Manchester’s Cheetham Hill district.

The court heard police found 87 messages Hussain sent to 43-year old Jones in the minutes before the stabbing saying: ‘I know you’ve gone to see that prostitute. You’re making excuses to go to a bent street. 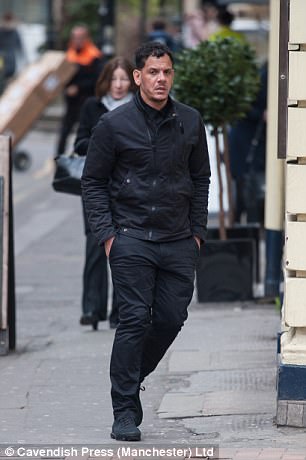 Ian Jones, Hussain’s partner, said: ‘I have never been and never will be with a prostitute, I love Shazia too much to that’

‘You’re with her. if you can’t stick to one girl then why should I stick to one guy. You’ve got a f****** girlfriend Ian, why you paying for a prostitute. F****** trampy Romanians don’t have a clue.’

The court heard Miss Margean was stabbed in the head and chest – leaving her with a deep ‘potentially disfiguring’ wound across the bridge of her nose.

Police detained Hussain after a scuffle broke out in the immediate aftermath of the attack between her, Miss Margean’s boyfriend who was at the scene and other call girls.

Miss Margean told the court: ‘It was very bad – it was horrible. She got me on the bridge of my nose and eyebrows then my left temple on the right hand side of my face, then on my chest just across my collar bone. I was covered in blood and I thought I was going to die.

‘My last customer before the attack had a call on his phone and the name came up as ‘wife’. He spoke to her for a few seconds and he spoke in English.

‘I went back to my place and lit up a cigarette and sat down. I saw a woman coming towards me angry. She had a cigarette in her hand she was very angry.

‘I have never seen this woman before in my life. She had blonde hair, I didn’t see what she was wearing she was very angry I was looking at her gestures and she was angry. I grabbed her by the hair straight away and her hand came up and she had the knife and she started to strike me with the knife.

‘I let go of her and started screaming that she’s hit me. I just remember fainting for three seconds and fell back but I remember her voice. 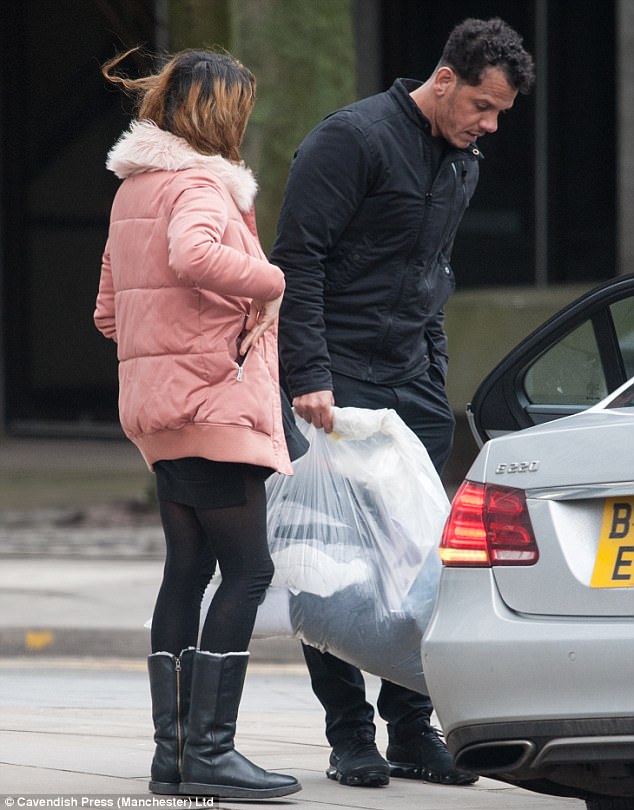 Hussain admitted sending the texts to Mr Jones but said they referred to another woman he had previously been romantically involved with. They are both pictured outside court

‘She asked me what nationality I was and I told her I was Romanian. She asked me if I worked there and I thought she was working there as well and wanted to fight.

‘I didn’t recognise her at all but I could just tell she was angry by her gestures. I don’t know how many times she hit me, I had cuts all over my head. When I fell down she tried to lift me up. I was shouting that she had destroyed me.’

Miss Margean was treated with surgical stitches before being discharged from North Manchester General Hospital. The court heard a black handled kitchen knife found near to where she was arrested had Miss Margean’s blood on the blade and Hussain’s DNA on the handle.

But Hussain denied attacking Miss Margean, claiming the victim was attacked by her boyfriend Giane Vasile.

She claimed she was an innocent bystander who had happened to be in the area to meet Jones and said she tried to intervene to stop the assault only to be chased away and attacked by Vasile.

Vasile, who denied wrongdoing, was arrested at the time of the incident on suspicion of assaulting Hussain but police took no action against him.

Hussain told the hearing: ‘I was just walking around in circles, wanting to know where Ian was when I saw something was going on. I said something like ‘what are you doing’ then he started chasing me and his top was off.

‘All of a sudden he was right behind me and I was running as fast as i could and when I turned around he was there.

‘I got a glimpse of the knife and got a grip of it but he had it in his right hand. I was trying my best to restrain him, I’m not a strong girl and I don’t know how I managed to do it.

‘I’m a victim nearly as much as her. Did you want me to get stab wounds and be in the same position?

‘I hadn’t slashed anyone yet I nearly got slashed in my stomach. He was aiming right for my guts. So much was going on it was like a whirlwind.

‘He was trying to break my wrists and my neck. I stuck up for myself and I don’t know why god gave me the strength he did. I was being a Good Samaritan and that’s what got me stuck here. I don’t resort to stuff with violence I run my mouth. He tried killing me.’

She said of Jones: ‘I don’t know where he was. Sometimes I accept that he’s with his mates but it’s the seeds planted in my head. The texts are not bitter, it’s the way I speak. We are madly in love with each other.’

At Manchester Crown Court, Hussain, from the city’s Didsbury district wept and sobbed ‘thank you’ to the jury as she was cleared of wounding with intent to cause grievous harm.

She was also acquitted of the lesser charge of unlawful wounding and having a bladed article in public after jurors took three hours to reach their verdict.

She admitted sending the texts to Mr Jones but said they referred to another woman he had previously been romantically involved with.

Jones told the hearing: ‘That day I had been with friends and she was annoyed about that. I have never been and never will be with a prostitute, I love Shazia too much to that. I’d arranged to meet a Shaz later on that evening.

‘I don’t know any Romanians and I don’t use the services of a prostitute. She always talks like that in the texts, I tell her to leave it until we come home and then we can talk about it.

‘Things just festered in her own mind. She has a bit of an imagination. She believed I had sex with that girl in the car but that never happened. I have never been with a prostitute.