A woman and her ex-partner have been jailed for 10 years each for allowing the death of a toddler who was tied face-down to a ‘cage bed’.

Lauren Coyle and Reece Hitchcott, both 20, were found guilty of causing or allowing the death of 19-month-old Ellie-May Minshull Coyle following a trial, but cleared of her manslaughter.

Liverpool Crown Court heard the toddler was found dead in her bed, which had been made into a ‘cage’ with cot sides tied together around it, in the couple’s flat in Ward Street, Lostock Hall, Preston on March 23 last year.

A post-mortem examination found her death was caused by ‘forcible restraint by ligatures in a face down position complicated by hyperthermia’.

Ellie May Minshull-Coyle (pictured) died after she was caged and forcibly restrained inside a cot at her home in Lostock Hall, near Preston

Sentencing the pair on Friday, judge Mr Justice Dove said: ‘The bed you both created and used, night after night, was quite literally a death trap.’

He said: ‘On the night of March 22 and March 23 2017, undoubtedly in escalating distress and agony, Ellie-May Minshull Coyle succumbed to asphyxiation while she was forcibly restrained in the cage which her toddler bed had been transformed into. 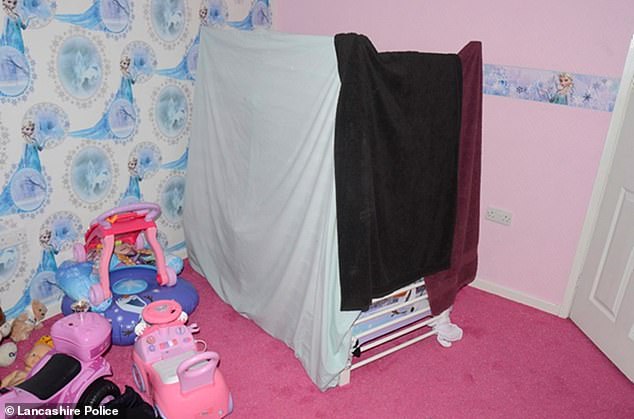 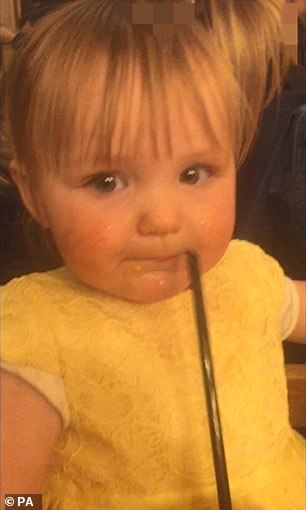 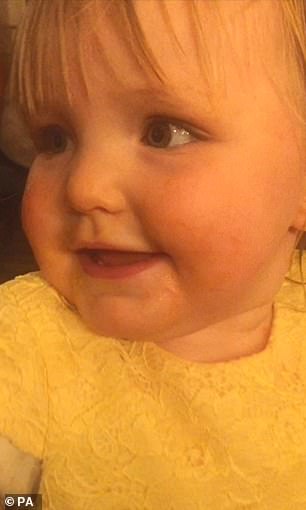 Ellie-May Minshull Coyle, pictured, was tied down in a bed described as a death trap

He said the couple had difficulties getting the child to sleep but had good advice from grandparents and health visitors.

Despite that, the judge said, Hitchcott, of The Fieldings, Fulwood, Preston, converted the purple Frozen bed into a ‘cage’, placing sheets and bedding over the sides of it to prevent the toddler seeing outside, and Coyle, of Collins Road, Bamber Bridge, Preston, went along with it.

Ellie-May was alleged to have been bound to the bed face-down and there were marks on her wrists and ankles, suggesting she had been tied to the ‘cage’, the jury heard. 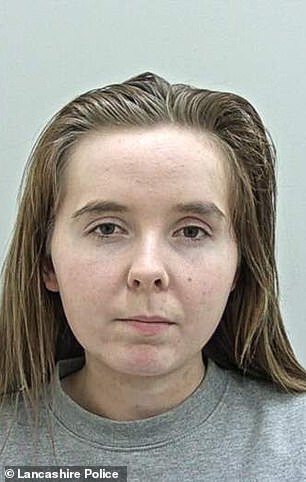 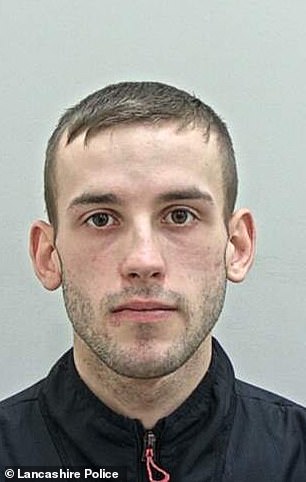 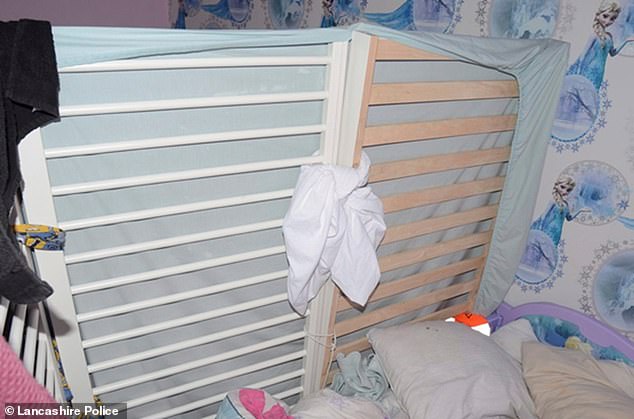 ‘The bed you both created and used, night after night, was quite literally a death trap,’ said the judge sentencing the pair in Liverpool Crown Court

The jury at Liverpool Crown Court were shown texts between Coyle and Hitchcott which revealed they were struggling to cope.

Coyle had sent a message to her lover, saying: ‘She was biting me so I put her in her room. She is banging her head off the walls. I have smacked her loads too.’

Hitchcott replied: ‘I will sort her out when I come home. I will put her in her room.’ Coyle said: ‘I literally feel like jumping in front of a train. So stressed.’

The court heard Ellie-May’s father, John Minshull, had moved out of the flat in Preston, Lancashire in December 2016, after she confessed she had cheated on him with Hitchcott.

Mr Justice Dove said the pair would have been aware of the ‘obvious risks’ but took them for their own ‘selfish reasons’.

He said: ‘I accept Ellie-May’s death has had a clear and significant impact on you both but in circumstances where you both continue to maintain your denials of involvement there can only be limited signs of remorse.’

In a statement which was read to the court, Ellie-May’s father John Minshull said: ‘Every day me and my mum think about Ellie and really miss her, we just wish we could give her a big hug and it breaks our hearts deeply.’ 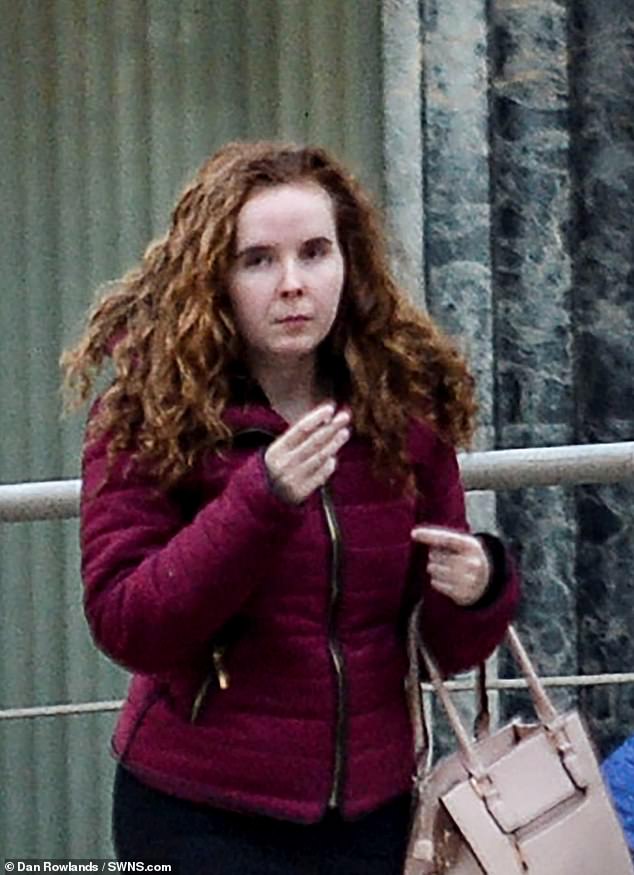 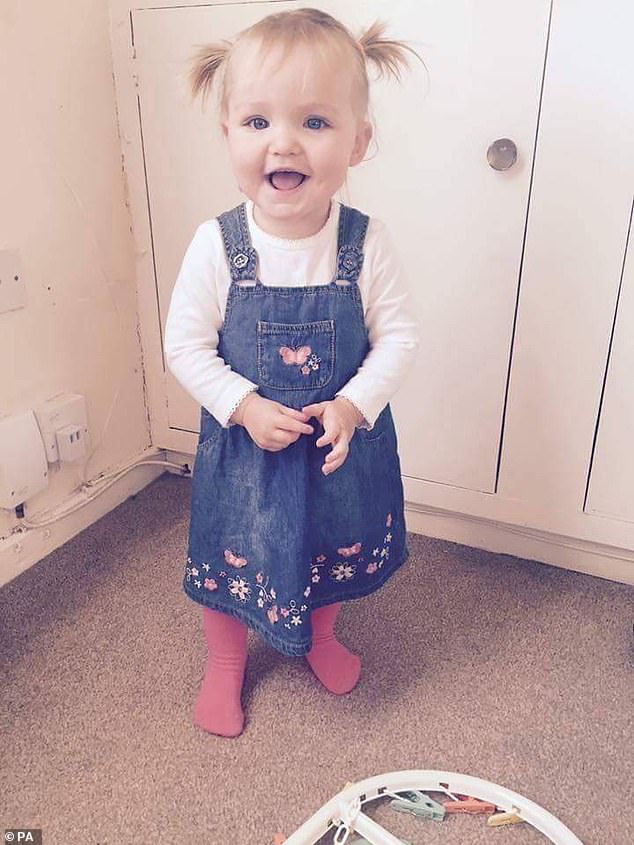 He added: ‘Now I can’t be a dad to her no more, it destroys me inside.’

John Jones QC, defending Coyle, said she had been subject of a ‘hate campaign’ on social media and had been ‘abandoned’ by her parents during the trial.

He said: ‘It must be remembered that Ellie-May had two parents. One now needs to be sentenced.

‘That doesn’t mean to say her sense of loss is in any way a reduced loss. 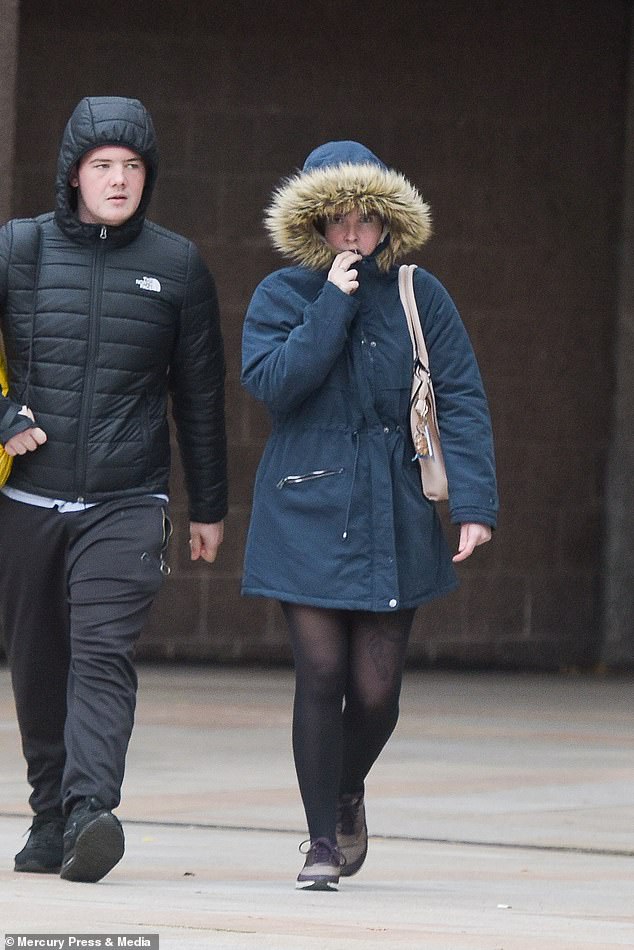 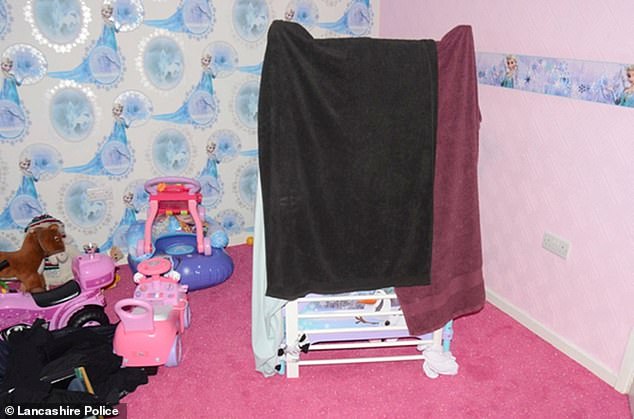 On the night of March 22nd/23rd 2017 blankets & ligatures were used to tie the toddler into her bed. A duvet was then placed over her meaning that she was unable to properly regulate her body temperature 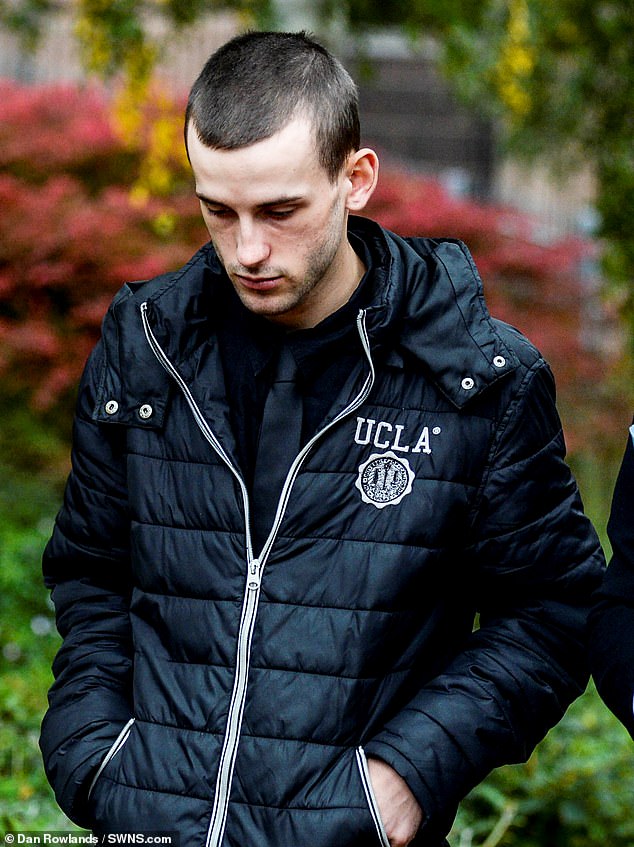 ‘Her loss is a profound loss and one that will be permanent in its nature.’

James Pickup QC, representing Hitchcott, said the defendant had been thrown out of home at 16, partly because of his cannabis addiction, and had lived on the streets and in supported accommodation before moving in with Coyle and Ellie-May.

He said: ‘He was an incompetent and inadequate ‘parent’, a person doing his best in those circumstances to assist Lauren Coyle.’ 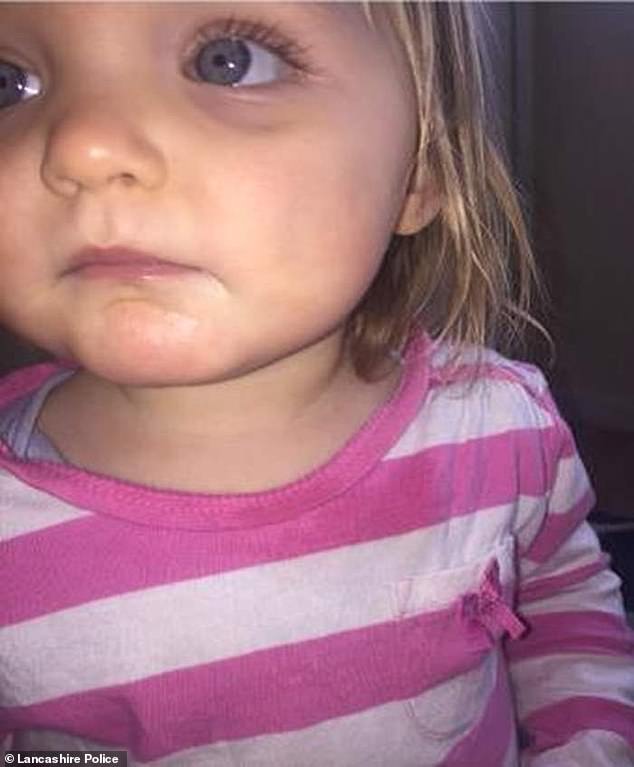 Speaking outside court after sentencing, Ellie-May’s grandmother Sharon Porter, who was accompanied by the tot’s dad John Minshull, described her as ‘perfect’

Their lodger, Connor Kirby, 20, of Octavia Court, Huyton, Liverpool, was cleared of all of the charges.

Speaking outside court after sentencing, Ellie-May’s grandmother Sharon Porter, who was accompanied by the tot’s dad John Minshull, described her as ‘perfect’. 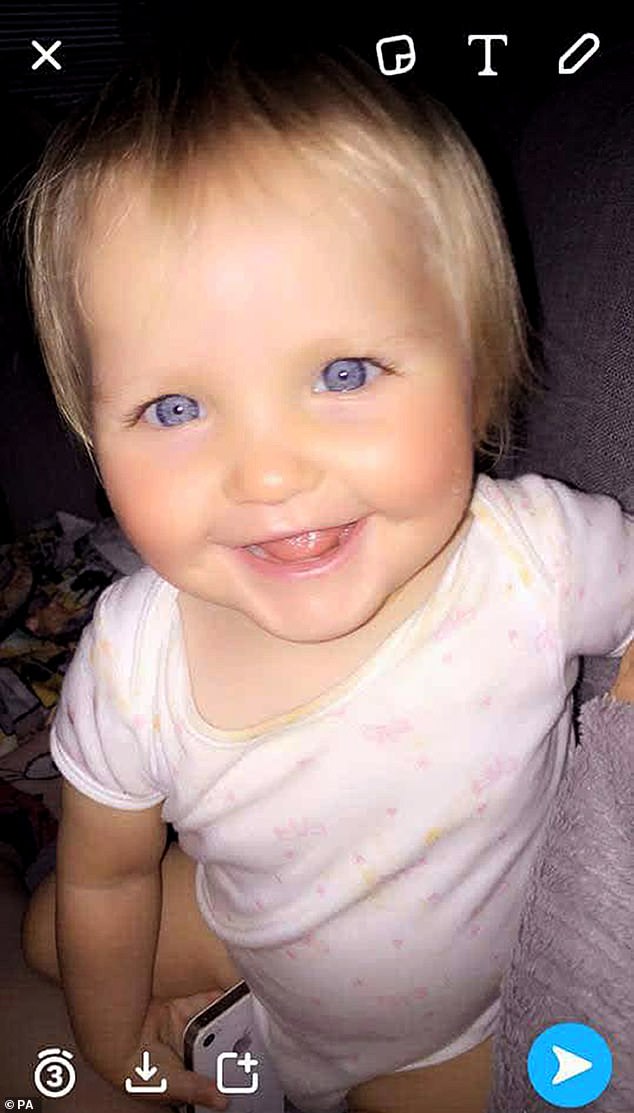 Sharon, who fought back tears as she spoke, said: ‘I just wanted to say that Ellie-May was a beautiful little girl.

She was so special to everyone around her. ‘She was always happy. She was the perfect daughter and a perfect granddaughter.

‘She will always be in our hearts and minds. ‘I also want to say thank you to our barrister Mr Tehrani and all the police officers for the support our family has had.’