Mother asks why having children isn’t seen as an ‘achievement’

A woman has sparked a fierce debate online after asking why parenting is not seen as positively as career success.

The thread, started on parenting forum Mumsnet by an anonymous UK-based poster, asked others if they believe parenting feels ‘thankless’ compared to professional achievements.

In the post, the woman revealed that parenting is the hardest things she’s ever done, but said that it seems rarely recognised as such by society.

The post sparked mixed responses, with some commentators noting that while having a child is not an achievement in itself, good parenting is.

An anonymous woman (not pictured) has asked others on Mumsnet whether they agree that motherhood is seen as less commendable than having a successful career, sparking a debate 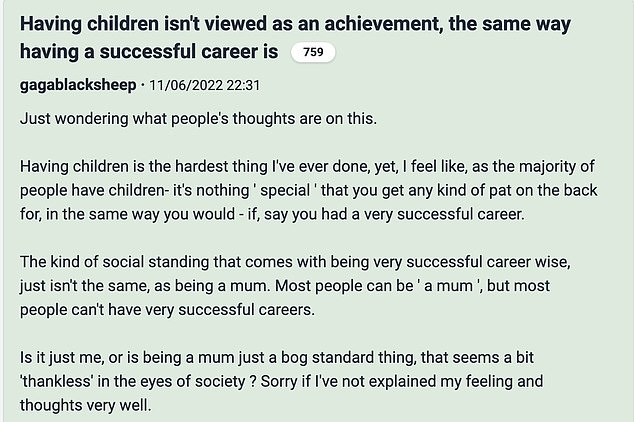 The poster explained that she felt motherhood can feel ‘thankless’, and isn’t acknowledged in the same way professional accomplishments are

She wrote: ‘Having children is the hardest thing I’ve ever done, yet, I feel like, as the majority of people have children- it’s nothing “special” that you get any kind of pat on the back for, in the same way you would – if, say you had a very successful career.

‘Is it just me, or is being a mum just a bog standard thing, that seems a bit “thankless” in the eyes of society ? Sorry if I’ve not explained my feeling and thoughts very well.

Many commentators noted that while conceiving a child is not an achievement, good parenting is difficult – and largely impossible to quantify

One commenter gave their opinion, saying that good parenting is an achievement, as oposed to the act of having children, but admitted it’s hard to measure.

‘No one really knows how good a job parents have done until their children become adults, and until then bringing up children is just a bog standard thing,’ she said.

Another wrote: ‘I think raising well rounded children is an achievement. But simply giving birth not so much. To have a successful career and raise children is impressive.’

And a further Mumsnetter added: ‘Having children isn’t an achievement.

‘Although the fact that I’ve not given mine food poisoning or lost them yet IS an achievement.’

A number of commentators pointed out that while parenting is hard work, unlike many careers, it does not require specific skills

Other Mumsnet users said that career success tended to reap greater social rewards because it requires a more specific skillset.

One poster said: ‘Any moron can get pregnant and drag up a kid. It’s much more difficult to create a successful career.

‘Parenting is hard work, but it’s not specialised work – anyone can do it. The same is not true for professional careers.’

Another agreed, writing: ‘You made the point yourself: most women can become a mum, if they want to; and frankly, unless they are actively neglectful or abusive as a parent they’ll more than likely turn out a perfectly fine child. It might be hard work in the sense that it’s drudgery, but it doesn’t take any particular special characteristic or skill or specialist knowledge, whereas a career does.’

A third wrote: ‘I think that’s because having children isn’t an achievement in and of itself. Any fertile couple can do it. Most women do have children so it really is a bog standard thing to do to most other people.’ 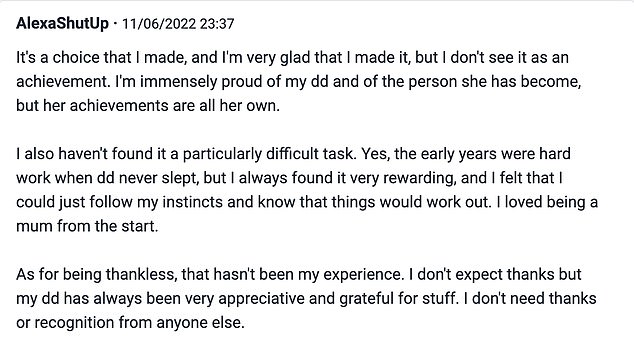 Others, many of whom noted that not everyone is able to have children, suggested that the poster may be looking for praise in the wrong place.

One said: ‘My kids regularly tell me I’m the best mum in the world. That’s the only appraisal I need. It makes my heart sing far more than positive feedback from my manager. Maybe you’re looking in the wrong places for the recognition you crave?’

A second Mumsnetter similarly posted: ‘As for being thankless, that hasn’t been my experience. I don’t expect thanks but my daughter has always been very appreciative and grateful for stuff. I don’t need thanks or recognition from anyone else.’

And a third commentator added: ‘I couldn’t care less what society thinks. I need no thanks for my contribution.’