Mother bashed by a group of teens while mowing her lawn because her son, 14, broke up with girl

A mother was mowing her front lawn when she was allegedly ambushed and bashed by a group of teenagers over a teenage love triangle.

Emma McKenzie, a single mum from Mill Park in north-east Melbourne, claims she was attacked the group of youths and another woman about 2:30pm Tuesday.

The gang allegedly came looking for Ms McKenzie’s 14-year-old son after he broke off a relationship with a neighbour’s 15-year-old daughter amid a messy ‘love triangle’ feud.

CCTV footage shows the moment a group of seven people began brawling on the footpath, but up to 20 people reportedly joined the scuffle later on.

One woman could be seen stomping on a man’s head while another woman, reportedly Ms McKenzie, was repeatedly punched, dragged to the floor and kicked.

Another woman appears to threaten the group with a boomerang.

A neighbour called the police about half an hour after the fight started when she saw one person getting assaulted with a tree branch.

One of the girl’s fathers allegedly arrived in the black vehicle and engaged in the brawl, attacking Ms McKenzie’s son and throwing him to the ground.

‘Initially it was between her 14-year-old son and some teenagers who live across the road,’ 9News reporter Lana Murphy told 3AW.

‘We understand this is all fueled by a break-up between Emma’s son and a 15-year-old who lives across the road.’

‘(Emma’s CCTV) shows some pretty confronting images, she was flung to the ground, she was punched multiple times in the head by a grown woman and some teenagers.

Ms McKenzie was left with bruises covering her body and a black eye after the assault. 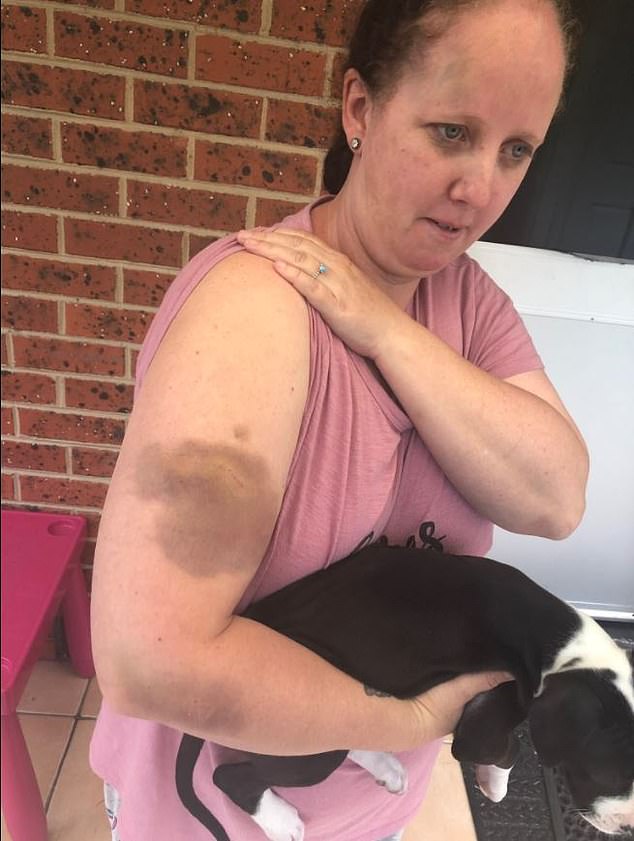 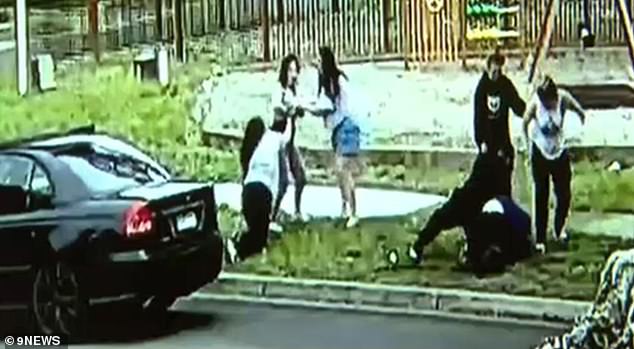 Ms McKenzie claims she was punched multiple times in the head and beaten with a plank of wood.

A spokeswoman from NSW police force confirmed to Daily Mail Australia that all involved parties knew one another.

‘All parties were given warnings and no arrests have been made at this stage,’ the spokeswoman said.

Police are currently investigating the exact circumstances surrounding the incident.