A blogger is facing fierce backlash after celebrating her son’s birthday with an Instagram post detailing how his photos don’t get as many likes on social media as pictures of his siblings.

Katie Bower, a 37-year-old mother of five based in Atlanta, Georgia, shocked her fans on Sunday when she discussed her son Weston’s photos from a ‘statistical point of view,’ explaining that ‘he wasn’t as popular with everyone out there.’

The post, which was shared in honor of Weston’s sixth birthday, started as a heartwarming tribute to the little boy but turned into a confession about how his pictures don’t get as many likes or comments from her 52,000 followers.

Too candid? Mommy blogger Katie Bower, 37, took to Instagram on Sunday to pay tribute to her son Weston on his sixth birthday, sharing this throwback picture 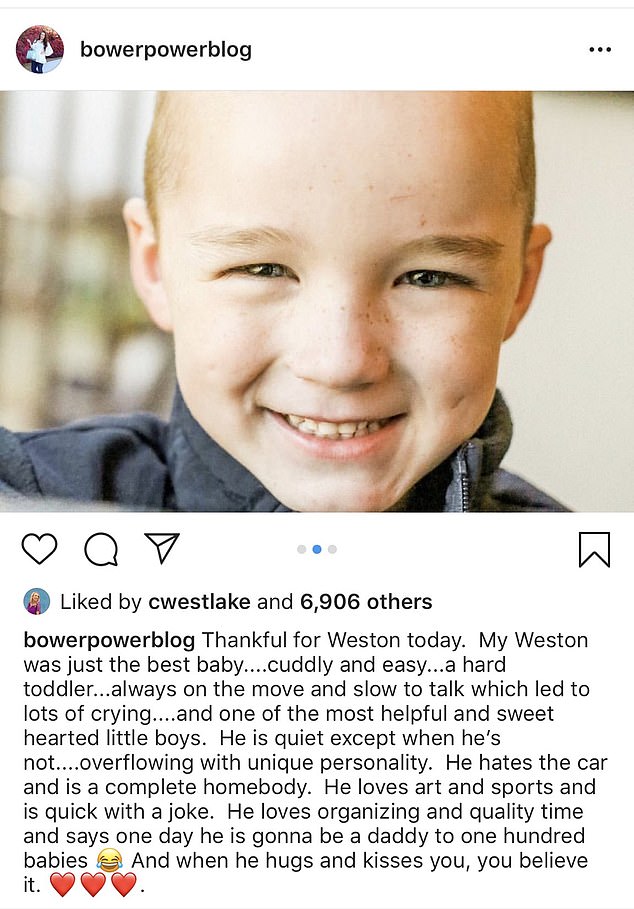 Bizarre: What started as a heartwarming tribute turned into a confession about how his photos don’t get as many likes or comments as pictures of his four siblings 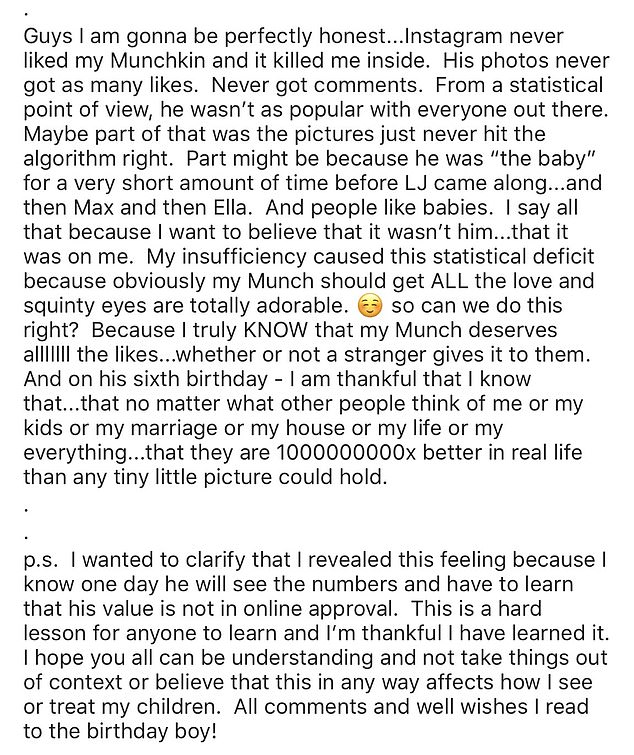 Say what? The mother of five from Atlanta, Georgia, said Weston isn’t as popular as his siblings on Instagram ‘from a statistical point of view’

‘Guys I am gonna be perfectly honest…Instagram never liked my Munchkin and it killed me inside,’ she wrote. ‘His photos never got as many likes. Never got comments.’

Weston has an older brother, Will, and three younger siblings, LJ, Maxwell, and Ella, and according to his mom, people are the least responsive to his photos.

‘From a statistical point of view, he wasn’t as popular with everyone out there,’ she said. ‘Maybe part of that was the pictures just never hit the algorithm right.

‘Part might be because he was “the baby” for a very short amount of time before LJ came along…and then Max and then Ella. And people like babies.’

Katie even went as far as to blame herself for her son’s lack of likes on Instagram. 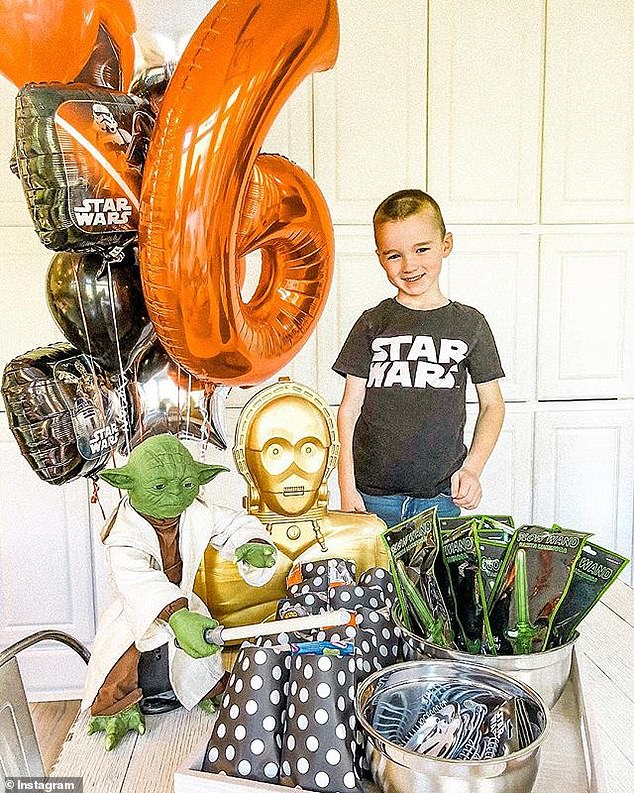 Her words: Katie said she knows Weston deserves ‘all of the likes’

Backlash: People have been taking to the comments section of the post to slam Katie

Harsh words: Critics accused the mom of being a negative influence on her son

‘I say all that because I want to believe that it wasn’t him…that it was on me,’ she explained. ‘My insufficiency caused this statistical deficit because obviously my Munch should get ALL the love and squinty eyes are totally adorable.

‘So can we do this right? Because I truly KNOW that my Munch deserves alllllll the likes…whether or not a stranger gives it to them.’

The mom ended her post by saying she is ‘thankful’ to know that no matter what other people think of her family, ‘they are 1000000000x better in real life than any tiny little picture could hold.’

The post has received hundreds of comments so far, with many finding her candid message to be ‘infuriating.’

‘You really think your kid is gonna look at how many likes his mom’s posts got about him and feel bad???’ one person asked. ‘You needa give this ig s**t up and get some help it’s warped your brain.’ 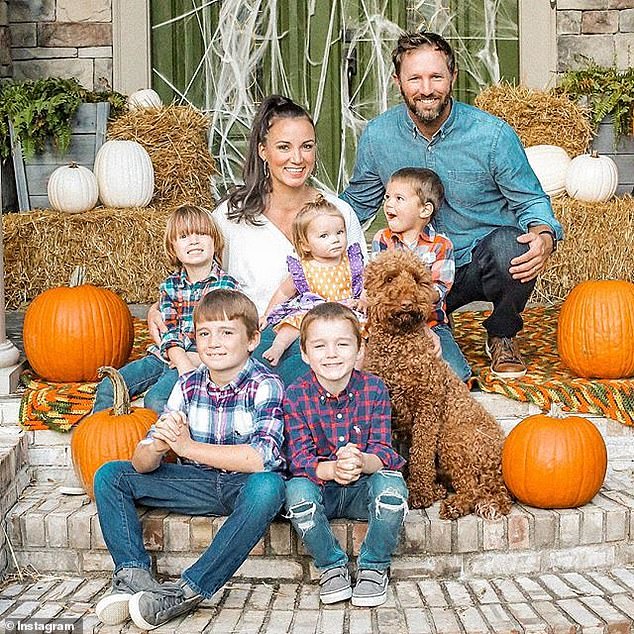 Family: Katie is also mom to sons Will, LJ, and Maxwell and daughter Ella 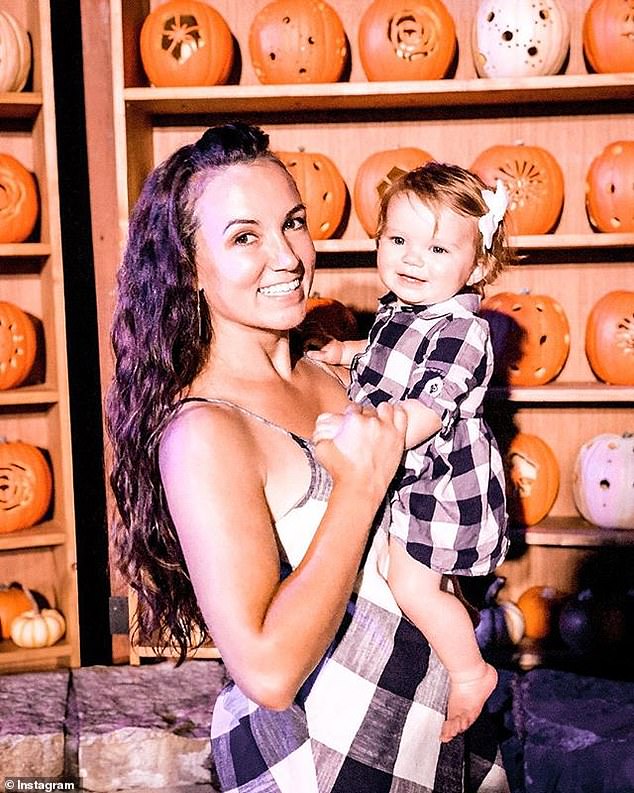 Defense: Katie returned to Instagram to say that she ‘revealed this feeling’ because she knows Weston will one day ‘see the numbers and have to learn that his value is not in online approval’

‘This is horrific! The only thing that will give him a complex is you!!!!’ someone else commented. ‘Seriously re read this and listen to how it sounds! “Statistically not as good”! Dear god!!!!! Shocking!’

Katie later returned to the post to try to explain her reasoning for writing about Weston’s Instagram lacks, or lack thereof.

‘P.S. I wanted to clarify that I revealed this feeling because I know one day he will see the numbers and have to learn that his value is not in online approval,’ she wrote. ‘This is a hard lesson for anyone to learn and I’m thankful I have learned it.

‘I hope you all can be understanding and not take things out of context or believe that this in any way affects how I see or treat my children. All comments and well wishes I read to the birthday boy!’

The post even attracted the attention of Chrissy Teigen after Stephanie McNeal posted screengrabs of Katie’s brutally honest message on Twitter. 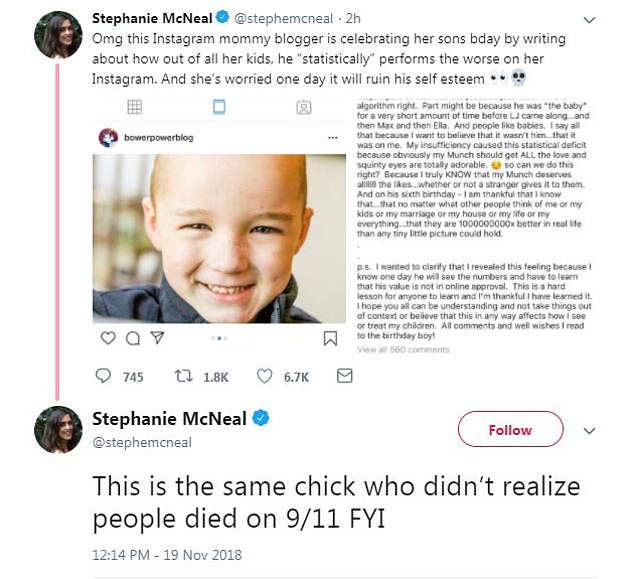 Outrage: Stephanie’s post about Katie even attracted the attention of Chrissy Teigen 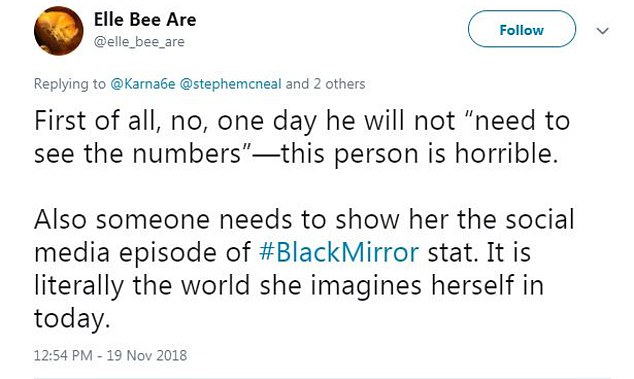 Hitting back: One person slammed Katie for saying her son will one day ‘see the numbers’

‘Omg this Instagram mommy blogger is celebrating her sons bday by writing about how out of all her kids, he “statistically” performs the worse on her Instagram. And she’s worried one day it will ruin his self esteem,’ Stephanie tweeted.

After seeing the message, Chrissy responded: ‘Oh. My. God. What in the hell??’

Stephanie also noted that Katie is the same woman who admitted she didn’t realize people in the Twin Towers had died on 9/11 until a year after the attacks.

Amid the backlash, Katie took to Instagram Stories on Monday to try to explain herself in a series of videos filmed in her bedroom.

The mommy blogger started the clips by noting that Instagram is the first social media platform she engaged in, and she ‘fell hard for it.’

According to Katie, she wrote about Weston not getting as many likes as his siblings because that was her own ‘personal growth’ that she had to learn. 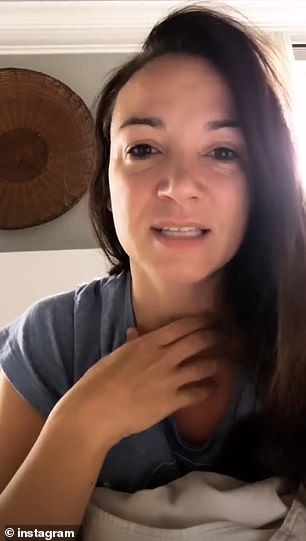 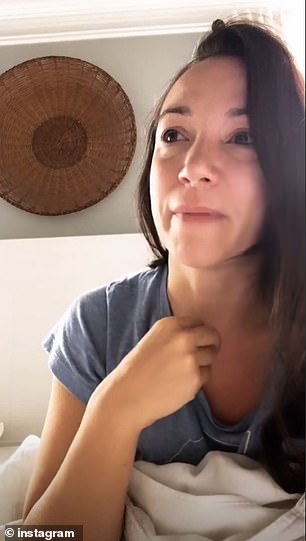 Coming clean: Amid the backlash, Katie took to Instagram Stories on Monday to try to explain herself in a series of videos filmed in her bedroom 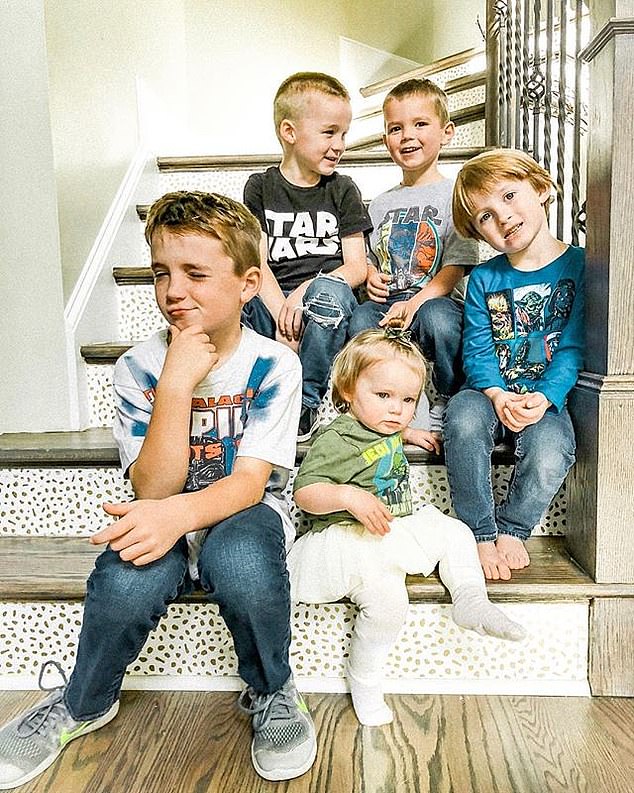 Katie noted that she knows a lot of people aren’t going to understand where she is coming from because they ‘don’t have business accounts’ and ‘don’t run their business based on social media.’

‘It’s a lot of people who thought I needed him to be liked,’ the mom said of her most recent post about her son. ‘No, I don’t. I like him. Nothing is going to change that. He is just awesome. All of my kids are.

‘But kids are smart y’all, she added. ‘Kids know that there are likes on photos, and it’s very human nature to compare. And, so for me, my personal growth journey is teaching my kids that it doesn’t matter.’

Katie started to tear up, but she explained that she wasn’t crying because of ‘mean comments’ or anything like that.

She said she was crying because she ‘had to learn something really difficult,’ and she hopes that the things she chooses to share will be ‘encouraging.’

‘Specifically, about this situation, I chose to share this because I thought it would be encouraging to somebody else out there,’ she said. ‘That they have to understand that social media does not even hold a candle to how awesome real life is.

‘And I hope that they know that their value isn’t in likes or statistics, that it’s in the fact that God loves them.’