A mother-of-two was diagnosed with an aggressive form of skin cancer by a mobile phone app after her busy lifestyle kept her from going to the doctors.

Louise Burgess, 45, was diagnosed with stage one melanoma in May this year after she noticed a mole on her arm changed shape last November and used the SkinVision app to track its progress.

The small business owner, from Canberra, was so tied up in her busy life she put off making a doctors appointment to get the mole checked, until the app reminded her three times to urgently seek medical attention.

Ms Burgess said: ‘The tone of the messages made me book to see the GP. It essentially sounded like my mother nagging me to do something but it was enough for me to act, thank goodness I did.’

The mole was removed before the tumour had the chance to spread, with monthly check-ups revealing Ms Burgess is cancer-free.

She credits the mobile technology for saving her life, saying: ‘God knows what would have happened if I didn’t download the app.’

Louise Burgess, 45, was diagnosed with skin cancer by a mobile app after she was too busy to visit a doctor (pictured with her husband, Jason, 46, and children Matthew and Emma, both 11) 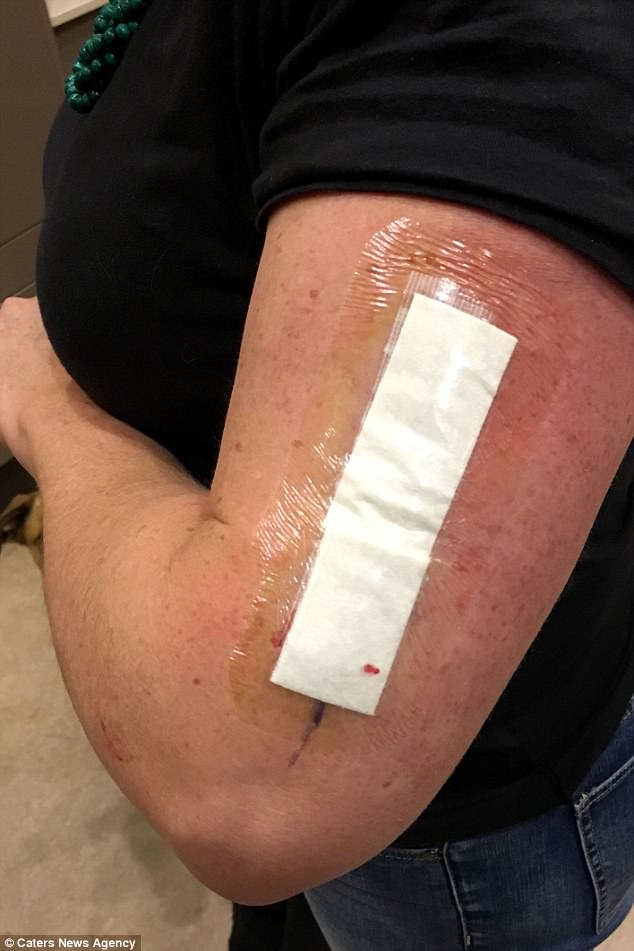 After the app reminded her to visit a doctor three times, she eventually had the mole removed 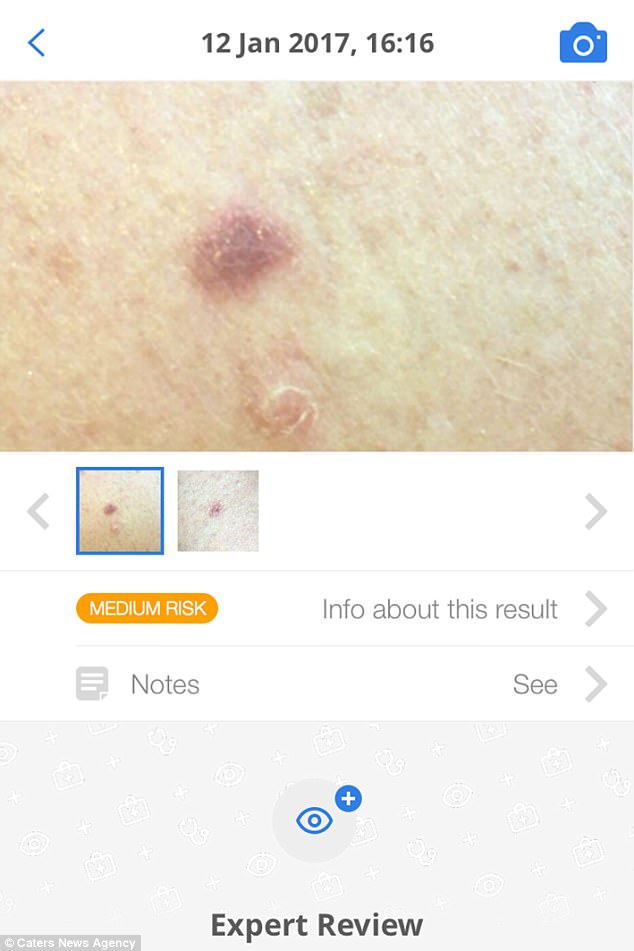 SkinVision is a mobile phone app that assesses a user’s skin cancer risk by analysing their moles.

After downloading the app, which costs between A$2 and A$25 Australian dollars, it asks questions about the user’s skin type, ranging from very fair to dark brown.

The user then takes pictures of their moles on their phone.

An assessment is made within 30 seconds, with ‘all clear’ requiring no action, ‘medium risk’ meaning the mole needs monitoring and ‘high risk’ requiring the user visits a doctor.

If a user gets a high-risk rating, an in-house dermatologist provides a free review to explain why there is a cause for concern.

The app also sends reminders for users to visit a doctor if necessary.

Ms Burgess said: ‘Getting to the doctor was only hindered by being too busy and not putting myself first. Something every mother does.

‘I first paid attention to the mole last year. I’d had a skin check a few years before but, as a busy mum, I hadn’t made the time to go back for another one.

‘I noticed the mole was a bit angrier than the others but didn’t make the time to get it checked.

‘In January 2017 I read about SkinVision in a magazine and downloaded it to test it out.

‘It said my mole was medium risk and that I should get it seen to but I never went.’

It was not until May this year that Ms Burgess was sorting through her emails and noticed the app had contacted her three times, advising her to seek medical attention.

She said: ‘It came back as medium risk the first time I used it and I didn’t use it again.

‘However, SkinVision emailed me to get it seen too, they had emailed me a few times but I didn’t read the messages, just thinking it was spam mail.

‘When I received a third email on my birthday in May, the tone of the messages made me book to see the GP.

‘It essentially sounded like my mother nagging me to do something but it was enough for me to act, thank goodness I did.’ 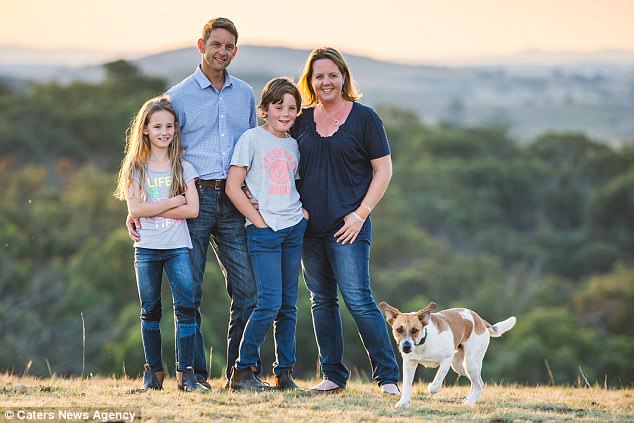 Now recovered, Ms Burgess urges her children to be sun safe as they are also at high risk 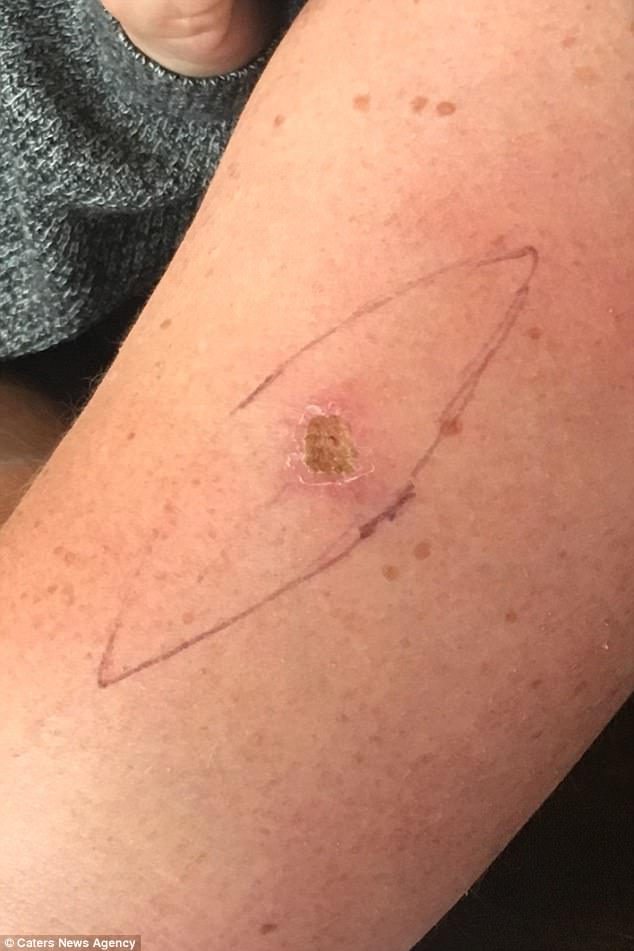 ‘I was scared and shocked’

Ms Burgess visited her GP, which resulted in her having the mole removed.

She said: ‘The GP did a full body check and we both agreed to remove the mole I was worried about.

‘He didn’t think it was a melanoma but because it had changed shape in the previous six months, and that I had been aware of it, removing it was the best thing to do.

‘When he called the next week to confirm the pathology results I was scared and shocked.’

Luckily for Ms Burgess, the melanoma was caught in its early stages and had only penetrated 0.3mm deep into her skin, and had therefore not spread to her lymph nods.

She said: ‘My ongoing treatment is essentially six monthly check-ups for the next five years. I had my first one last week and all was clear.’ 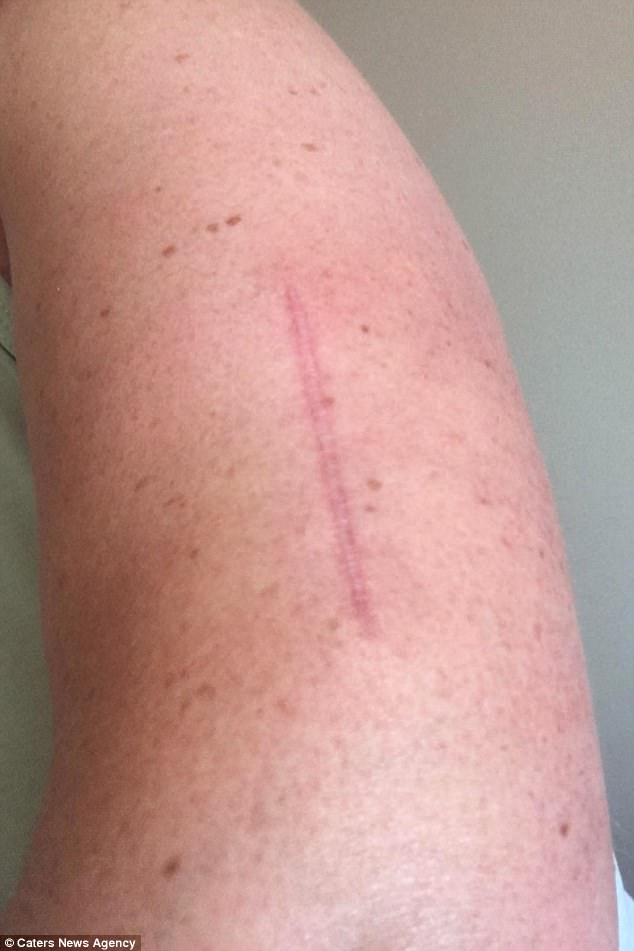 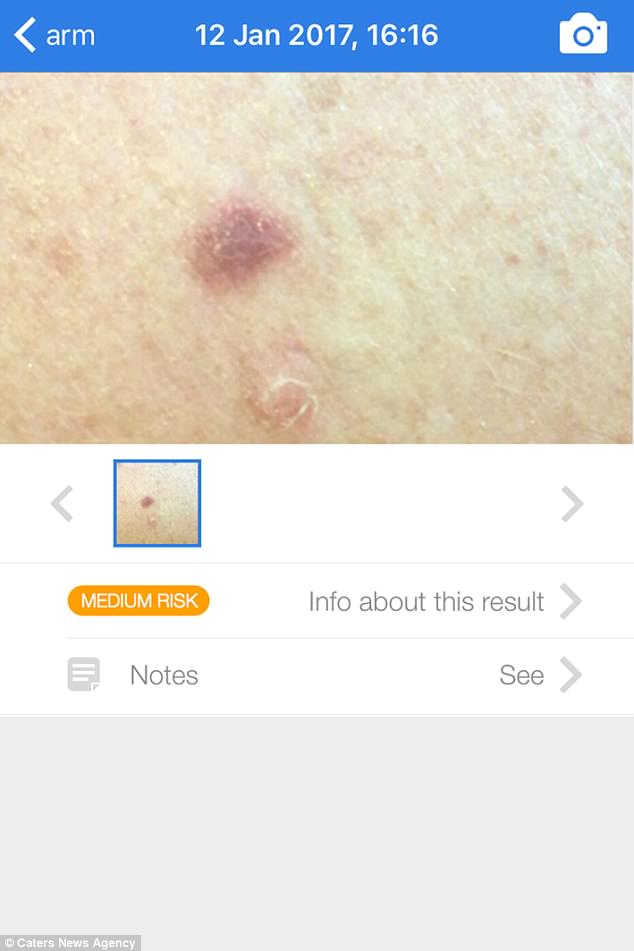 ‘I was high risk from the start’

She said: ‘My kids are sun smart. The school system here demands it, although it can be hard to convince a teen to cover up.

‘Now that my kids know they are twice as likely to develop melanoma than someone without a family history, they are a bit easier to convince.’

‘Growing up in the Australian sun in the 70’s and 80’s means we were always exposed to the harmful UV rays, without realizing what that was doing to us.

‘Being fair skinned I always got sunburnt and I’m covered in many moles and freckles; I was high risk from the start.

‘God knows what would have happened if I didn’t download the app.’