A young mother who had been suffering migraines suddenly collapsed and died from a brain haemorrhage just minutes after she had been celebrating an England World Cup victory with her family.

Rosina Warburton had been watching England beat Colombia in a penalty shootout with relatives and friends at her home in Rochdale in July and was talking about putting pizzas in the oven.

But she was then found slumped over a neighbour’s child and distraught family members could not wake her.

Doctors later discovered that the 34-year-old, who had been suffering migraines before her collapse, had a brain aneurysm, which had burst causing a bleed onto her brain.

An inquest heard that, although the party guests had cocktails to celebrate England’s win, alcohol was not a contributing to her death.

Ms Warburton’s neighbour Robert Morley told a coroner: ‘I was watching the football and went outside for a cigarette. Rosina was talking about putting pizzas in for the kids and her and my partner were having a laugh.

‘But I then heard my son crying and I found Rosina had collapsed on top of him.

‘I moved my son out of instinct. Then her mum and my partner were trying to wake her up. She was facedown at first and she wasn’t responding. Her lip started to go blue and I try to listen to her breathing.’

The inquest was told it took two minutes for Mr Morley to get through to a 999 operator, instead of the target of five seconds, due to a deluge of calls on a busy night for emergency services.

An ambulance arrived 12 minutes later and Ms Warburton got to hospital just under an hour after she collapsed. Doctors were unable to save her. 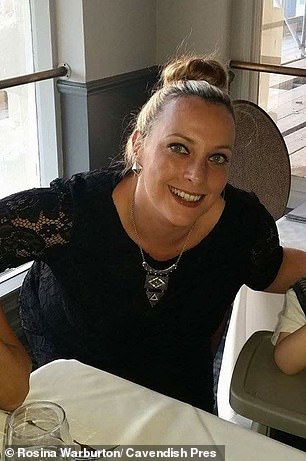 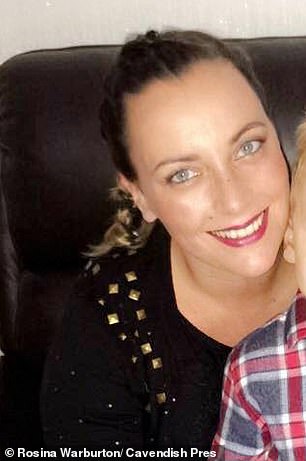 Rosina had been at a school taster day with her child and was happy, her mother said

Miss Warburton’s mother Cecilia said she had been a school taster day with her child and was ‘happy and looking forward to life’.

She added: ‘We have concerns over the aneurysm as there is family history of it. We found out from her grandmother who said that her father had one when he was older. It had run on her father’s side.’

Dr Stanley Ferns of Fairfield General Hospital added: ‘They couldn’t operate due to the extent of the bleed, despite her young age, it was quite catastrophic.

‘The cardiac arrest duration was around 15 minutes. I don’t think the ambulance arriving quicker would have changed the outcome due to the nature and extent of the bleed. An operation was not feasible.

‘There were no drugs or alcohol contributing to her death. Symptoms leading up to this can mimic migraine symptoms. I do not think anything could have been done to save her life. 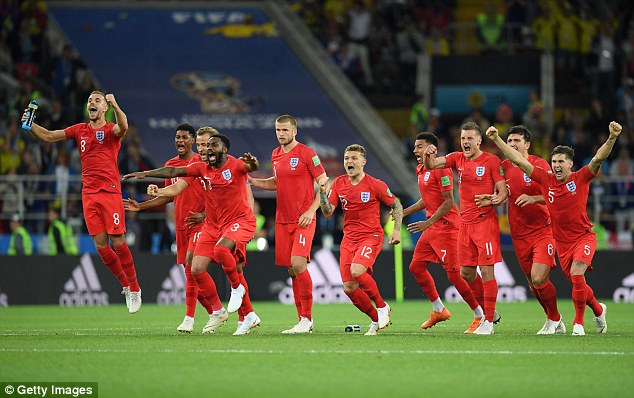 What is a brain aneurysm?

An aneurysm is a bulge in a blood vessel caused by a weakness in the blood vessel wall, usually where it branches.

As blood passes through the weakened blood vessel, the blood pressure causes a small area to bulge outwards like a balloon.

Symptoms include sudden agonising headaches, described as a ‘thunderclap headaches’, stiff neck, sickness and vomiting pain on looking at light.

If a brain aneurysm is detected before it ruptures, treatment may be recommended to prevent it rupturing in future.

Most aneurysms won’t rupture, so treatment is only carried out if the risk of a rupture is particularly high.

Factors that affect whether treatment is recommended include your age, the size and position of the aneurysm, your family medical history, and any other health conditions you have.

Dr Ferns added: ‘The prolonged cardiac arrest and the bleed on the brain had come from a ruptured aneurysm. Her blood pressure was well controlled so this may be why the aneurysm did not burst earlier.’

Recording a verdict of death by natural causes coroner Lisa Hashmi said: ‘She suffered with a collapse which was totally unexpected. She was enjoying being around her family and watching the football but collapsed unexpectedly.

‘She had suffered with a brain haemorrhage and that was contributed by an aneurysm in her head and the evidence says it was unsurvivable. The ambulance service was being used a lot that day and the nearest emergency vehicle was deployed.

‘They were not answering in five seconds or did not arrive in seven minutes due to high volume that night. We all know how stretched the public services are. It is highly likely if it had been there in one minute it would not have made a difference.

‘She in effect died with her family at home, this would have been comforting for your daughter that you were there.’