Mother discovers simple hack so that everything will fit in place

A professional organiser has revealed her life-changing hack to ensure everything fits in your dishwasher.

Anita Birges, the founder of Mise en place, revealed she had been washing her large dinner plates by hand for over a year before working out a simple solution to her dishwasher’s lack of space.

In an Instagram video she shows how her plates stop the machine’s mechanisms from spinning.

She then unclips the sides of the top drawer, slides it out and lifts it so the bottom rollers run against the rail instead.

This instantly created the extra few centimetres needed to fit the plates on the bottom shelf without ruining the machine.

Anita revealed she had been at a loss for a year, handwashing all of her large items.

‘Clever old me thought it was because ‘plates used to be smaller’ and ‘this dishwasher wasn’t the most modern one’,’ she wrote alongside the video.

A shop assistant was the first person to alert her the dishwashing problem could be down to user error.

‘Last weekend I measured up the space and went around the whole of Westfield Shopping Centre looking for a plate that was 25cm in diameter, not the usual 27cm,’ she said. 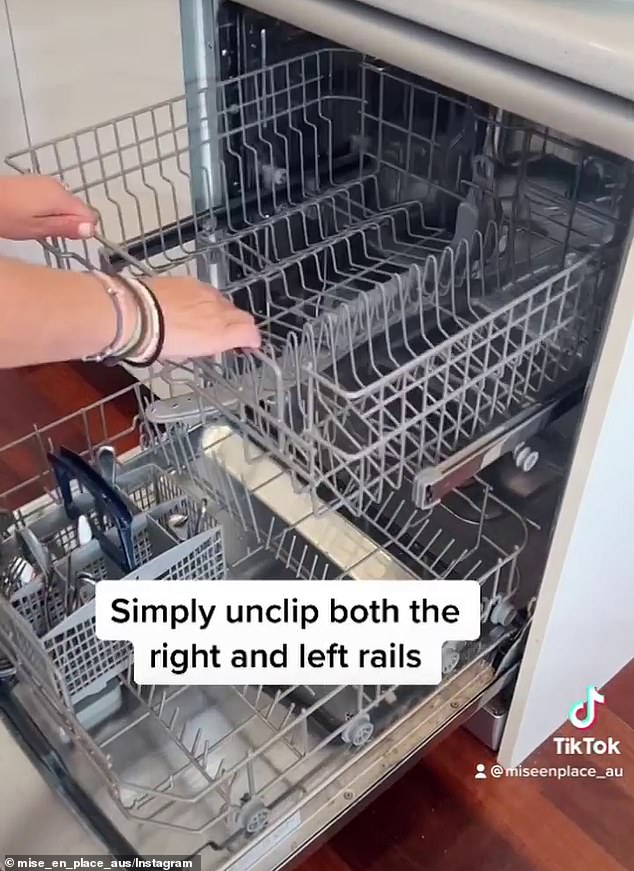 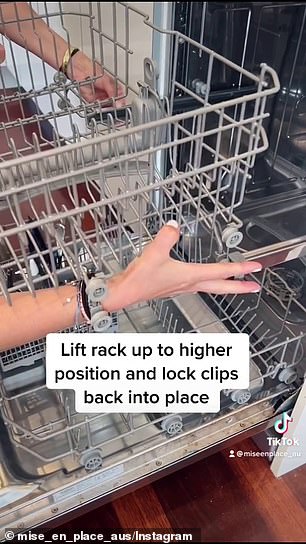 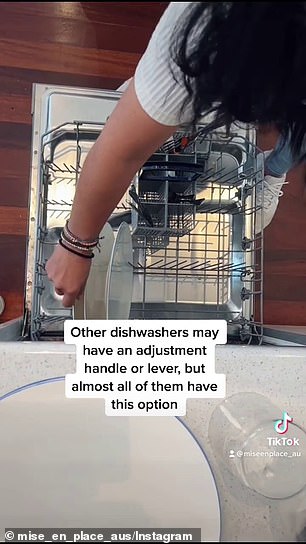 ‘Alas, after scouring many shops with my measuring tape in hand, I was informed by the nicest shop assistant ‘you do know that your top dishwasher rack is adjustable’?’

Shocked she went home to test the assistant’s theory and was blown away.

She wasted no time sharing the handy tip with her fans who were equally impressed.

How do I make more room in my dishwasher?

1 – Unclip both left and right rails

2 – Lift the rack up to the higher position and lock clips back into place.

3 – Others dishwashers may have an adjustment handle or lever, but almost all of them have this option.

4 – A lot of major dishwasher brands (Whirlpool, Bosch, Samsung and Thermidor, for example) have even put out videos showing you how to do it.

6 – Not only is it a great solution for enabling you to wash larger dishes in your dishwasher, it will also prevent things from getting damaged from being shoved into a too short rack.

‘Got the other half to do exactly this yesterday & hey presto it works,’ thanked one woman.

‘You have saved me from buying a new dishwasher,’ said another.

‘I was going to replace my brand new dining set because of this issue… I put down the phone, and adjusted my top rack. Game. Changer,’ wrote another.

Another woman joked the hack was useful – but noted wine glasses don’t fit when the shelf is moved up.

‘The choices we must make,’ joked Anita.