A mother has been able to save her two-year-old’s life by donating one of her kidneys.

Jace Josephson, from Minnesota, was born with hypoplastic left heart syndrome, a condition in which means that side of the heart does not develop correctly.

After two major surgeries and a heart transplant, which involved being on life support for almost half a year, Jace’s kidneys failed.

Mother Akasha Josephson, 23, was overjoyed to find she was a suitable match to donate a kidney, just in time for the holidays.

Akasha Josephson, 23, from Minnesota, was able to donate her left kidney to her two-year-old son Jace Josephson 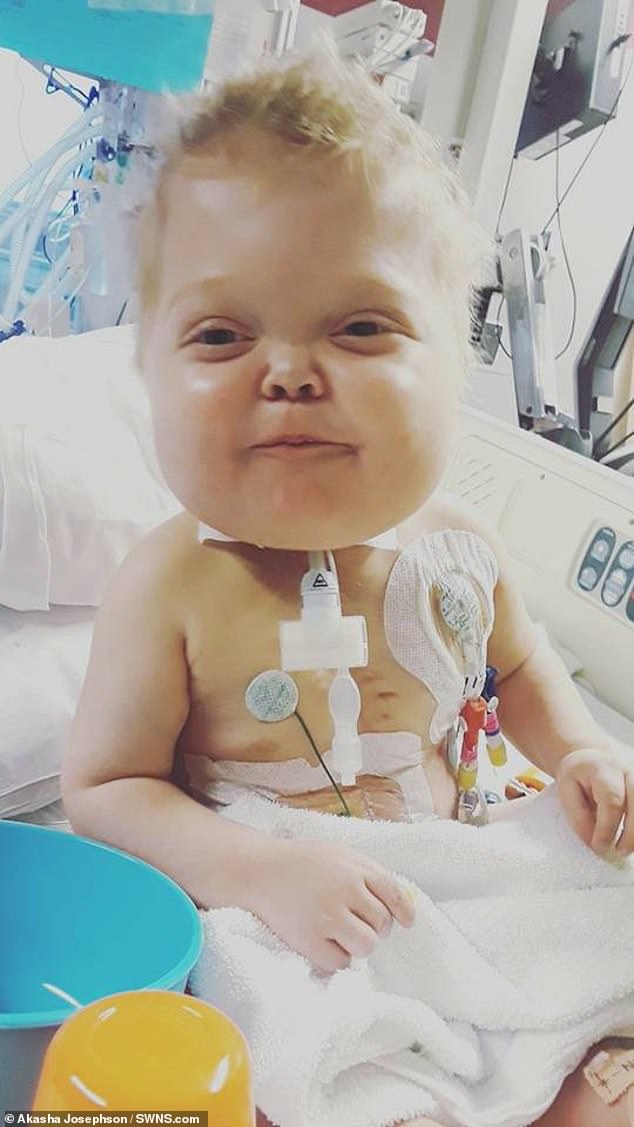 Jace was born was a heart condition called hypoplastic left heart syndrome,which means he is unable to pump oxygen properly

It is a form of congenital heart disease – a term used to describe a problem with the heart due to abnormal development before birth.

About 960 babies are born in the US every year with this defect, according to Centers for Disease Control and Prevention, and around 200 in the UK.

Before Jace was seven months old, he had two major heart operations to insert shunts to help balance the blood flow.

But Jace went into cardiac arrest ahead of his third surgery in August 2017 and doctors determined he would need a heart transplant to survive.

He waited 146 days whilst on life support, until he was given a donor heart on January 27.

But three weeks after his transplant, things began to go wrong. 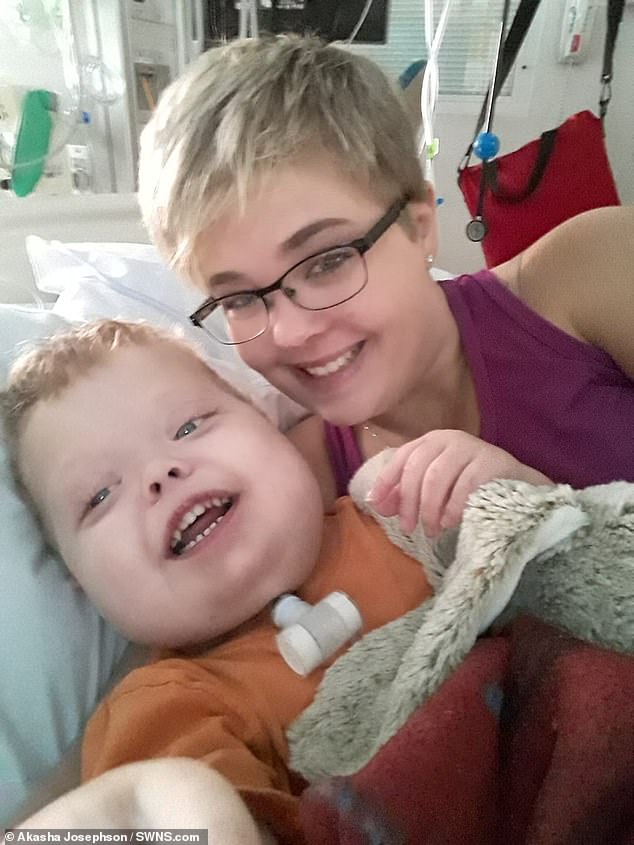 Jace, pictured with his mother, had two major heart surgeries before he was seven months old. After going into cardiac arrest ahead of his third surgery, doctors said he would need a heart transplant 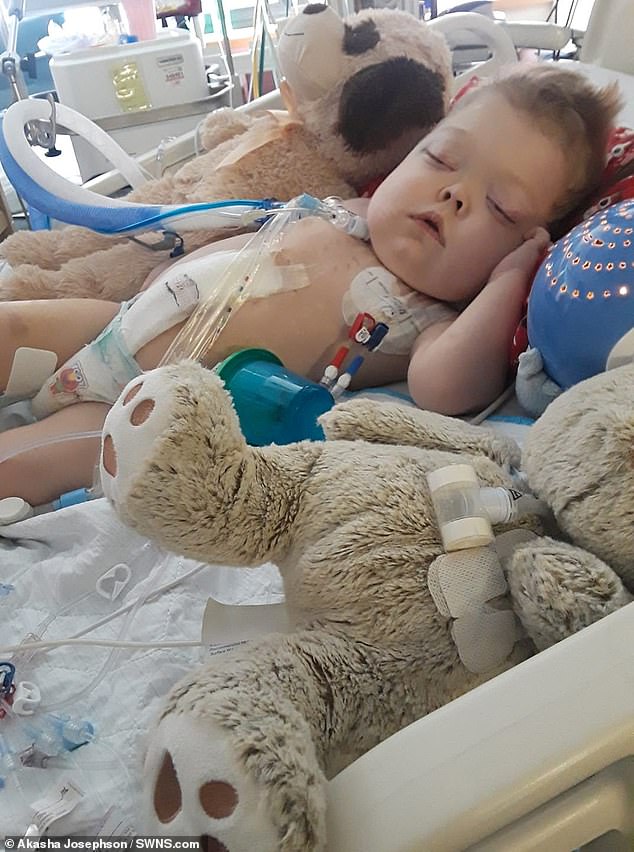 After Jace’s heart transplant, which he waited for on life support for 146 days, his kidneys failed 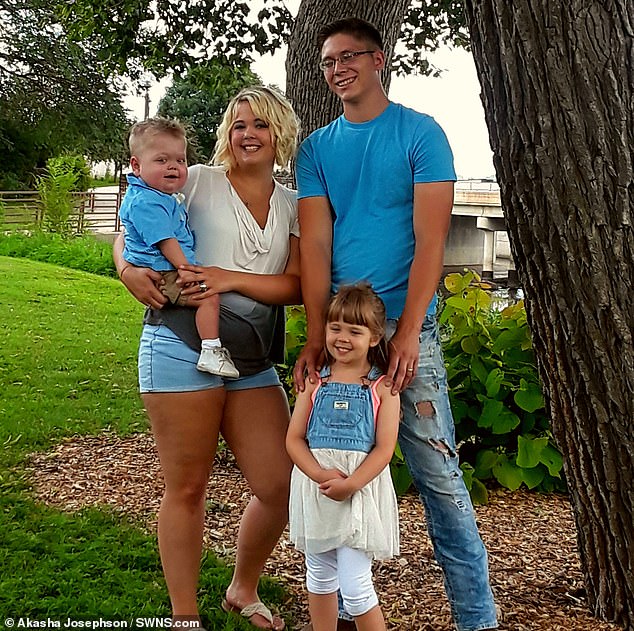 The family, including Jace’s sister Lilliona, four, and father Timothy Josephson,  hope to spend Christmas together this year, but Jace will be in hospital for Thanksgiving

Mrs Josephson, who is also mother to Liliiona, four, and married to husband Timothy Josephson, said: ‘His large intestine died and broke open.’

WHAT IS HYPOPLASTIC LEFT HEART SYNDROME?

Hypoplastic left heart syndrome (HLHS) is a birth defect, affecting normal blood through the heart and thus the rest of the body.

It occurs while the baby is developing during pregnancy, when the left side of the heart doesn’t form correctly.

When someone doesn’t have a left side, the right side has to do both jobs.

The CDC estimates each year less than 1,000 babies are born in the United States with HLHS. Around 200 are made in the UK.

Figures suggest 30 per cent of infants who survive a heart transplant will die before they turn five.

Because of this, and the medication needed for his heart, his kidneys were unable to cope and failed.

In heart transplantation, altered kidney function is not uncommon immediately after.

Many patients have temporary dialysis – the process of remove waste products and liquids from kidneys that aren’t functioning – and gradually recover normal kidney function.

Yet others have chronic kidney failure and require help clearing their blood indefinitely.

After almost ten months of dialysis, Mrs Josephson was told she could donate her kidney to her son.

The criminal justice student and Jace underwent the surgery on November 19, just in time for Thanksgiving.

She said: ‘I feel so relieved that I was able to do this for him.

‘He is an amazing, positive little boy and he never stops smiling. I’m a little sore but it was only keyhole surgery.

‘They put it into Jace and the kidney made urine straight away which is amazing.

‘He’s been through so much, it’s so hard for any toddler to be in hospital but he has an incredible spirit.’

Jace’s surgeries have weakened his lungs and the two-year-old lives with a tracheostomy tube to help him breathe.

His doctors at the Mayo Clinic Hospital, Saint Mary’s Campus in Minnesota, believe it won’t be a permanent fixture in his life.

Although he will remain on immunosuppressants for the remainder of his life to prevent his organs rejecting, doctors believe he will lead a full and happy life.

Mrs Josephson will be discharged on Wednesday but it is likely her son will remain in hospital over the holidays.

She said: ‘I’m not sure what Jace wants from Santa but I’m sure he’ll figure it out.

‘I’m just looking forward to a Christmas at home with my family. Jace was in hospital last year awaiting his transplant.

‘It will be nice to have my kids together and my husband.’