‘I’ve killed my mother!’ Horrified daughter’s scream after she crashed her car and her mum was flung out of passenger window when doctor gave her permission not to wear a seatbelt because of her HERNIA

A mother who was allowed not to wear a seatbelt for medical reasons was killed when she was thrown through the window of her daughter’s car in a crash, an inquest heard.

Sarah Evans, 58, was given an exemption from wearing her seatbelt by her doctor following a hernia, a coroner in Swansea was told.

She was thrown through the front window from the passenger seat when her daughter, Rachel’s, Ford Ka crashed into the central reservation of the M4 near Llangyfelach, South Wales in January last year.

Sarah Evans tragically died when she was thrown through the window of her daughter’s car in a crash last year. She had been exempted from wearing a seatbelt due to a hernia

The inquest was not told that if the keen darts player had been wearing a seatbelt, it may have saved her life.

An inquest this week heard there was no drink or drugs in her daughter’s system – and she was said to be driving in line with the speed limit.

Rachel said she couldn’t remember the moments leading up to the fatal crash.

Phone records showed Rachel had received an iMessage at 7.10pm from a friend on her mobile phone but it is not known if she had read it.

The Crown Prosecution Service decided to take no further action.

The inquest heard a witness, David Coates, saw Mrs Evans’ body fly from the window of the car. 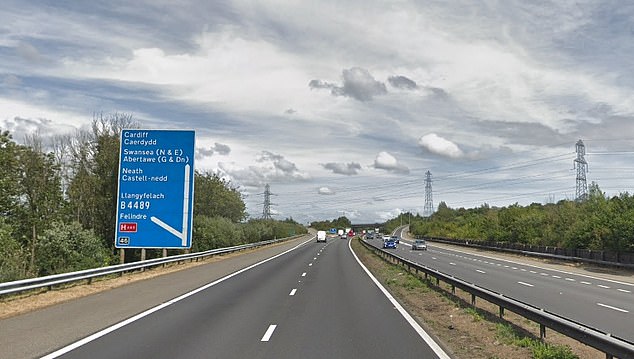 The crash happened on the M4 near Llangyfelach, South Wales in January last year

In a statement released at the time, Mrs Evans’ family said: ‘She was a loving wife to Steve and mother to Rachel. She lived and loved life to the full.

Her husband, Steve, added: ‘She will be sorely missed by her family and circle of many friends.’

He recorded a conclusion Sarah, of Llanelli, died as a result of a road traffic collision.