This is the dramatic moment a mother giraffe defended her badly injured calf from hungry hyenas in South Africa on Friday.

The person who captured the clip was driving alone in the Kruger National Park when they spotted the ‘most adorable baby giraffe’ with its mother.

It wasn’t long before they realised the calf was in serious danger and struggling with an injury that could signal a death sentence.

‘The calf was limping badly and I was shocked to see the bottom part of its left back leg broken off,’ the filmer said.

‘I soon realized this calf kept on looking back at hyenas following it. Hyenas are well known to take out any weak or injured prey and this limping baby giraffe was a loud dinner bell ringing.

‘The video shows one hyena testing the situation while running towards the calf. At the same time, the mother was right nearby. One kick to the head with her large hooves will instantly kill a hyena.’ 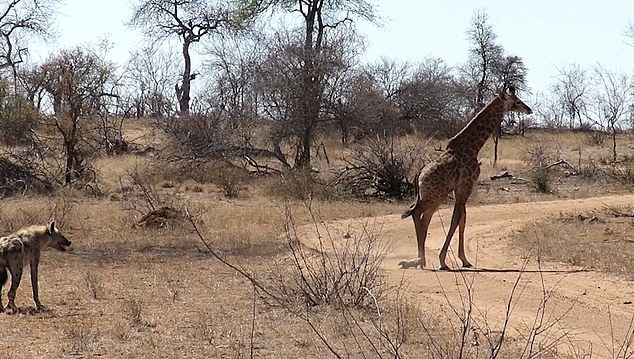 The person added that after it became very hot very quickly, the mother left her young in the shade and went to feed about 50 meters away.

‘Suddenly, the two hyenas came bursting out from behind a bush running towards the calf. The calf got a fright and with only three legs the giraffe still managed to run. At the same time, the mother giraffe was back to protect her calf in record time..the hyenas slowly moved away to lie down in the shade not too far away,’ said the filmer.

The future of this injured calf looked bleak with such a serious injury according to the witness who added that It’s only a matter of time before either the hyenas or another group of predators tries again to make the kill. 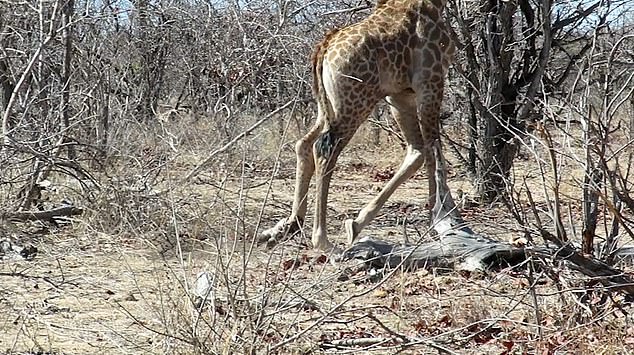