A mother gave birth to her premature twin sons in two different hospitals more than 50 miles apart in a ‘horrendous’ and ‘confusing’ ordeal.

Both little boys were delivered at 30 weeks amid a 100-mile journey involving a convoy of ambulances, police cars and an air ambulance helicopter.

The mother went to Caithness General Hospital, in Wick, after her waters broke while she was at work last November but it was decided to move her to Raigmore Hospital in Inverness, 100 miles away.

However halfway into the journey the ambulance made an emergency stop and she gave birth to her first son, who was breech, at Golspie Hospital in Sutherland.

The mother went to Caithness General Hospital, in Wick, Scotland, pictured, when her waters broke while she was at work last November

This baby was born just after 10.30pm and the mother was told an air ambulance had been summoned but wouldn’t arrive for some time.

The mother later said that this period was filled with ‘a lot of confusion, questions and lack of decisions’ before she was sent on her way.

Eventually a doctor and two nurses were ferried by police car from Inverness to look after the first twin.

The mother was then informed the helicopter was unable to land because of frost on the propellers.

Eventually it was decided to continue the ambulance trip to Inverness. A convoy of two ambulances and three cars left at 2am.

Once the mother and medical convoy arrived at Inverness the second twin was induced.

The mother wrote in a Facebook post: ‘We left for Inverness by convoy, two ambulances, one with me and two midwives and the other with twin one and two nurses, a police car and two other cars with doctors and my partner.

‘When we arrived in Inverness I was induced and twin two was born. He was taken to the special care baby unit along with his brother.’ 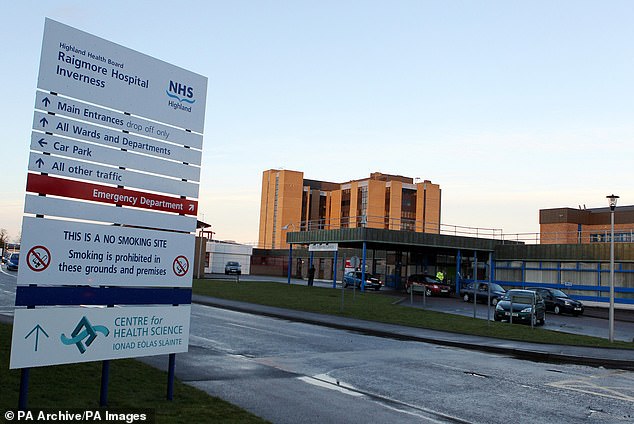 It was decided to take the mother to Raigmore Hospital in Inverness, pictured, more than 100 miles away to deliver her twins but one was born half way at Golspie Hospital in Sutherland

Although she insists she has ‘nothing but the greatest of praise for all staff involved’, the mother says she is haunted by thoughts of all that could have gone wrong.

She said: ‘We would like to know why weren’t we flown to Inverness? Why could specialists not come up to Wick? Why are Wick and Golspie staff expected to work like that?

‘Golspie wasn’t prepared for such an emergency but they did what they could and they did amazing.

‘This shouldn’t be the case. We dread to think what could have happened if the road was closed by an accident or bad weather.’

The mother and her twins remained in hospital for six weeks until they went home.

The 30 weeks pregnant mother arrives at Caithness General Hospital, in Wick, after going into labour while at work.

Halfway there the ambulance stops at Golspie Hospital in Sutherland.

The first little boy is born in Sutherland just after 10.30pm.

An air ambulance helicopter is called but cannot land because of frost on the propellers.

A convoy of two ambulances, one police car and two other cars leave for Iverness at 2am.

Baby number two is then born at Raigmore Hospital in Inverness.

NHS Highland have said they will examine how the case was handled after it was raised at Holyrood by Highlands and Islands Labour MSP Rhoda Grant.

Health campaigners described the unnamed woman’s ordeal as ‘horrendous’ and claimed it raised more questions about maternity services in the far north.

In this particular case the spokesman said ‘standard assessment, triage and transfer protocols’ were followed.

The spokesman added: ‘For reasons of patient confidentiality, NHS Highland would not wish to comment publicly upon the case in question but as in all such cases we will be conducting an internal review to consider the specific circumstances of this case.’

Meanwhile Ron Gunn of the Caithness Health Action Team (CHAT), which is campaigning for better maternity services, described the case as ‘horrendous’.

‘Valid questions need answered,’ Mr Gunn said. ‘The whole thing would have been avoided if they had airlifted her down to Inverness or they had brought up a team to deal with it in Wick.

‘Hopefully lessons can be learned from it. We will probably never get back to where we were but the system we have at the moment is not really safe.’

Concerns about maternity cover in the far north have expressed ever since consultants were withdrawn from Caithness General Hospital two years ago.

NHS Highland said each case was ‘carefully considered’ including the use of helicopters and ambulances.

A spokesperson said: ‘Whenever these contingency plans have been implemented, there has been a good outcome for mothers and babies.

‘Predicting how labour will progress is a matter of clinical judgement and it is not always easy to predict.

‘NHS Highland does everything it can to make sure that the best possible clinical advice is obtained before deciding on how best to proceed.’