A mother has given birth to her third consecutive set of twins meaning she’s had six babies in five years.

Jolene Mckee, 32, and her husband, Andrew, 33, from Brooklyn, New York, are now a family of eight after recently welcoming their third set of twins, Aiden and Jaiden, who are now three-months-old.

The mother-of-six says it has been a blessing to get six children from three pregnancies and since twins are all that they know, she has felt more like a pro each time.

Jolene and Andrew now have Peyton and Paige, five, Abigail and Andrew, three, and the newest additions, Aiden and Jaiden. They are all fraternal (non-identical) twins.

Jolene Mckee, 32, and her husband, Andrew, 33, from Brooklyn, New York, have had three consecutive sets of twins – taking their family to eight 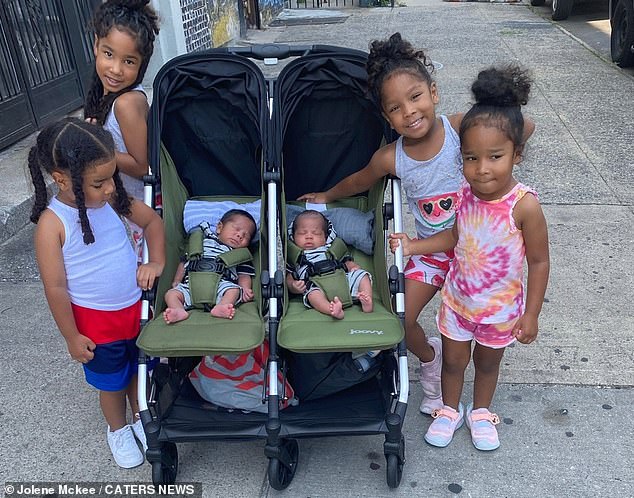 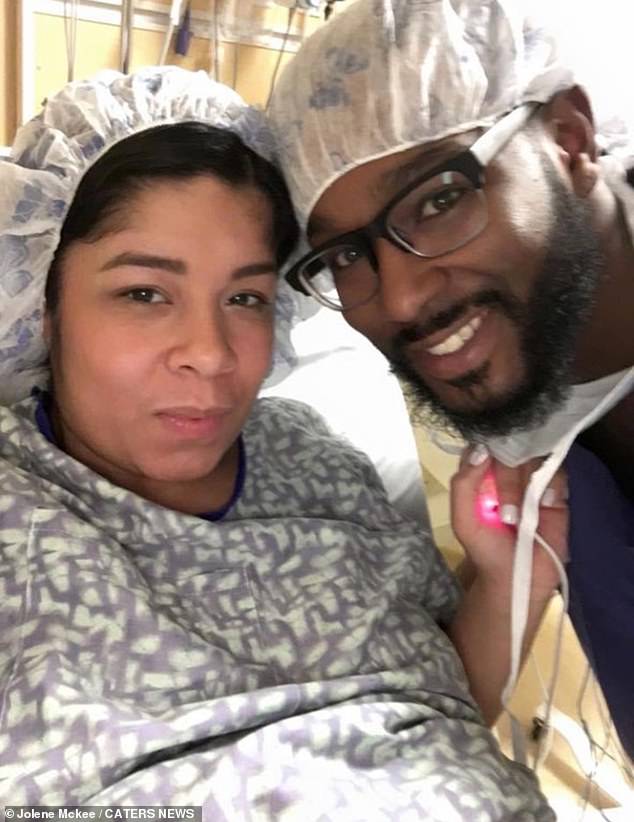 Jolene with husband Andrew, pictured here in hospital. The mother-of-six has described having six children from three pregnancies as ‘such a blessing’ 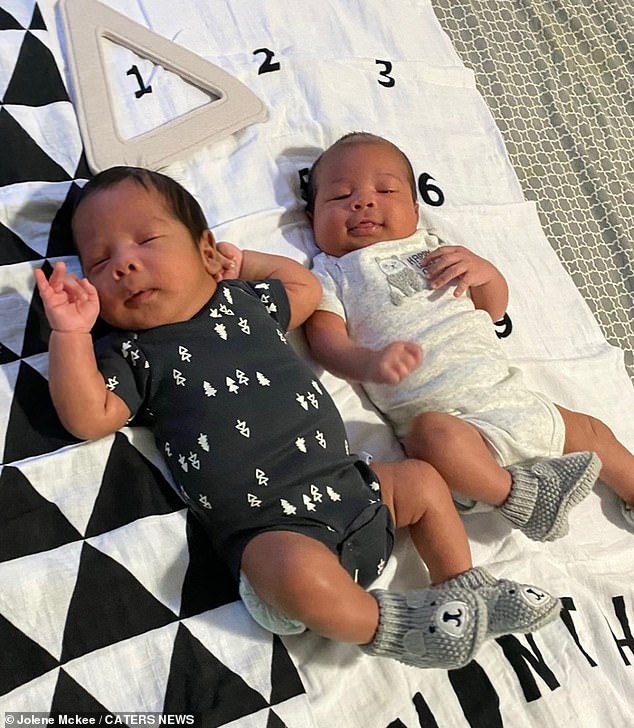 The youngest twins Aiden and Jaiden, who were born three months ago, and were Jolene and Andrew’s third consecutive set of twins

Jolene said: ‘I never envisioned myself with a big family.

‘I thought I’d only have maybe one or two kids.

‘But it is such a blessing that I have had six babies from just three pregnancies.

‘When I discovered I was pregnant with twins for the third time, I just fully accepted that this must be what I was appointed to do. 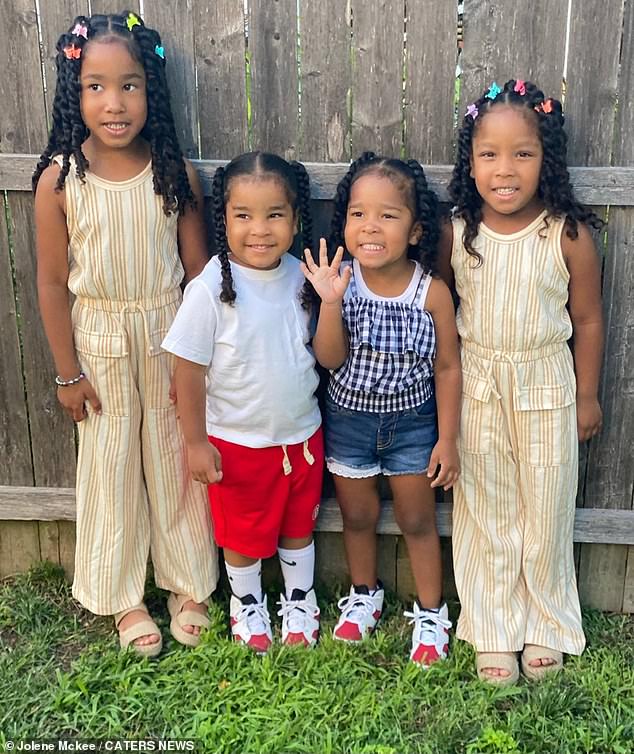 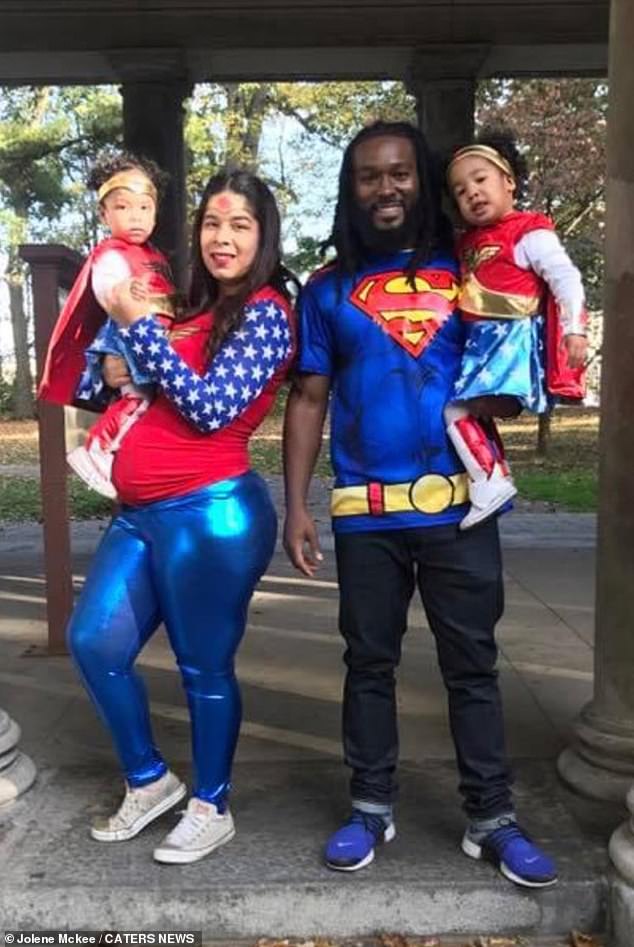 Jolene, pictured with Andrew and twins Peyton and Paige during her during pregnancy, says people are often fascinated by how the couple have so many children so close in age 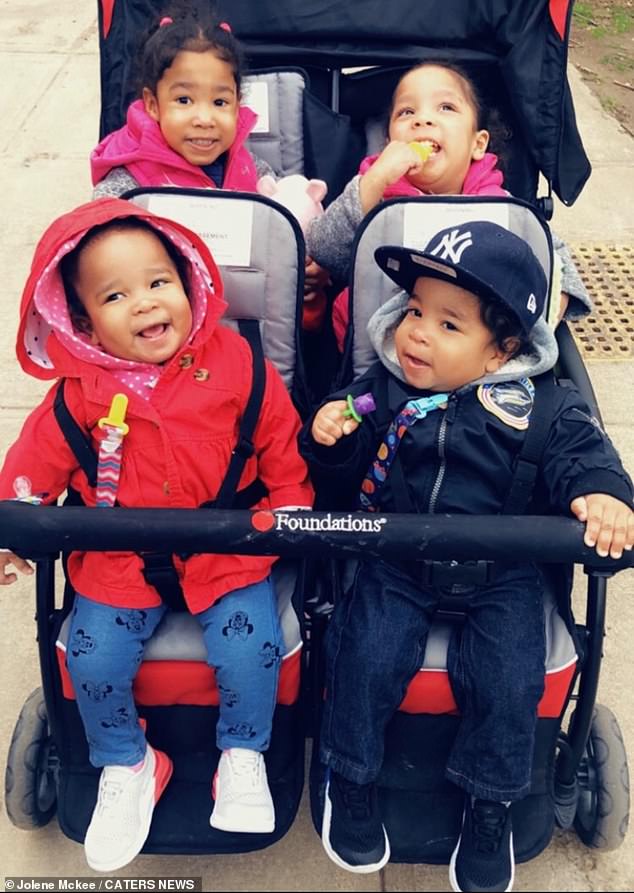 Aiden and Jaiden (front) pictured with older siblings Abigail and Andrew.  Jolene says enforcing a good schedule is crucial to keeping organized with so many children

‘I feel so lucky that we have all three combinations too, girl twins, boy-girl twins and now our boy twins.

‘It worked out perfectly.

‘Before I fell pregnant with the eldest set of twins, Peyton and Paige, I had previously suffered a miscarriage and three months later I discovered I was pregnant again.

‘I was so scared to go to the doctors for the scan after going through the pain of miscarrying. 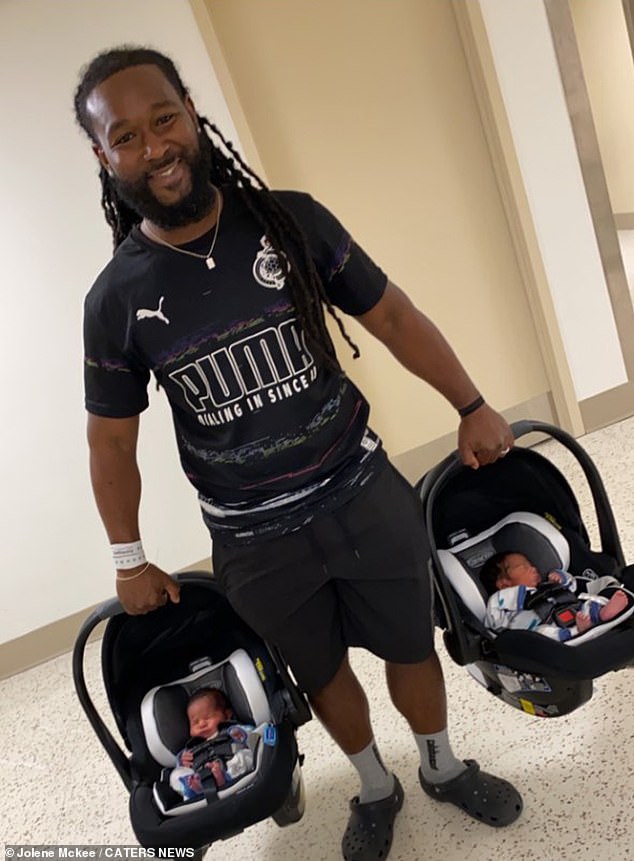 Dad Andrew with the couple’s youngest twins Aiden and Jaiden, when they were very young babies 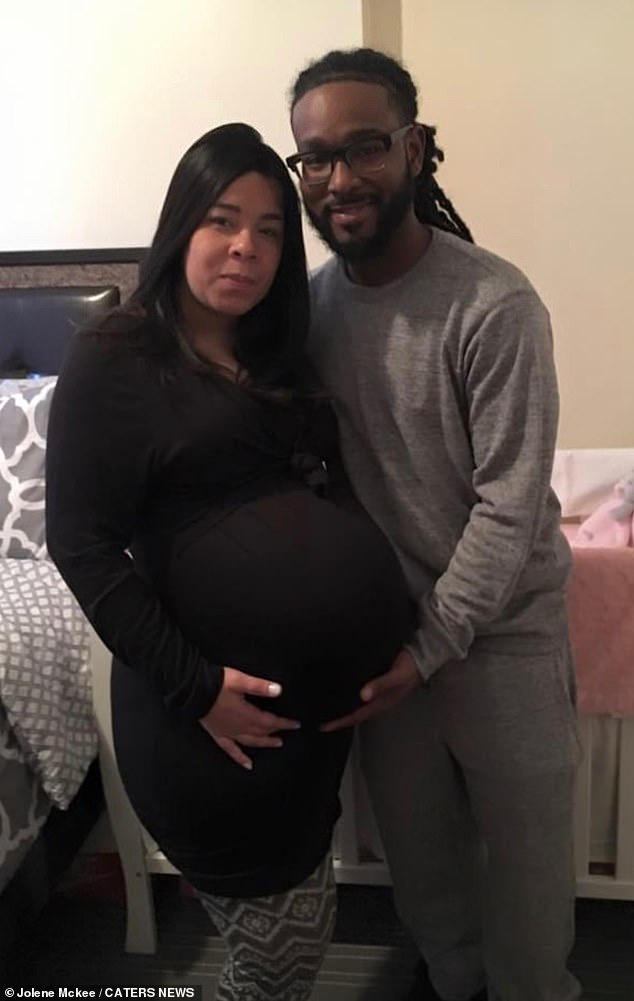 Jolene, pictured with husband Andrew, said the reason for her having so many sets of twins is due to having an overactive uterus, which she says causes her to drop two eggs at a time 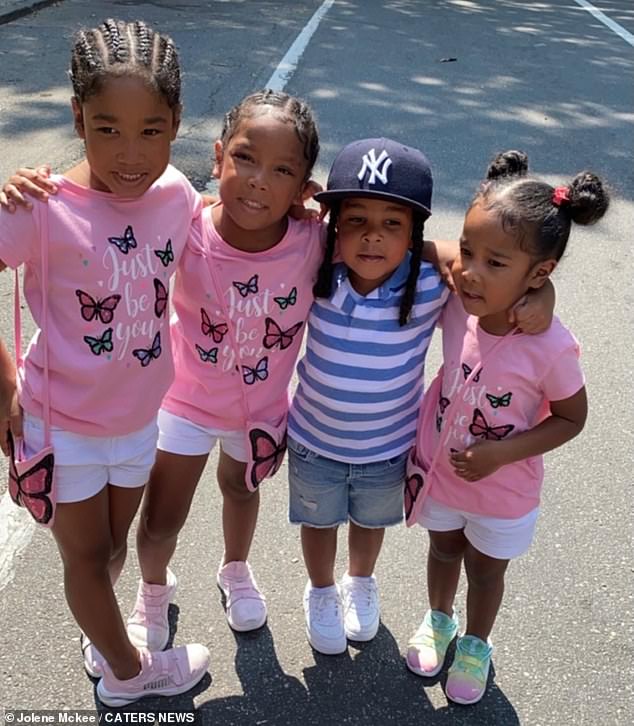 ‘Heartwarming’: According to Jolene, watching her children grow and progress really ‘warms [her] heart’. She says they all have their own different personalities

‘I was panicking the whole time because they were taking so long and they called someone else in the room.

‘And then they told me I was expecting twins. I couldn’t believe it.

She recalls having an inkling that she was pregnant with another set of twins.

What is multiple ovulation and why does it happen?

Twins can occur in two ways. One is when a single fertilized egg splits into two embryos – resulting in identical twins.

The other is when two separate eggs become fertilized in the womb, resulting in non-identical twins – like Jolene and Andrew’s sets of twins.

According to Jolene, she has had three sets of twins because of an overactive uterus which she says causes her to drop two eggs at a time.

In some cycles, it’s possible for both ovaries to release an egg cell.

This is known as multiple ovulation or hyperovulation.

There are a number of causes of multiple ovulation but it can only happen in a short window.

When both eggs are fertilized, fraternal twins are conceived.

There are a few things that can cause multiple ovulation to happen:

However, she says she was still shocked when the news was confirmed and her husband was in shock.

Jolene added: ‘All of my pregnancies went really smoothly, but it was very different the second and third time around, being pregnant while also being an active mother.

‘But I just had to push through.

‘After giving birth to Abigail and Andrew, it was challenging having two sets of twins.

‘But twins was all that we knew so it kind of felt like it got easier with each set.

‘We knew how to handle it.

‘After falling pregnant for the third time, I was 100 percent sure it couldn’t be another set of twins.

‘I thought it would definitely be just one baby.

‘So when we found out it was twins for the third time we were in shock.

‘The doctor was just as shocked as us.

‘He said that in 25 years he had never seen a woman have three sets of twins.’

Jolene says that the reason for her having so many sets of twins is due to her having an overactive uterus which she says causes her to drop two eggs at a time.

Jolene said: ‘I just accepted that this is what was meant for me and I love it.

‘Each child has their own different personalities and although they’re twins they each have their own little buddies.

‘My favourite thing is watching them grow and progress.

‘It really warms my heart.

‘People can’t believe that all of the kids are ours.

‘Because we are quite young, they don’t understand how we can have so many kids.

‘When we explain the story they are in disbelief

‘They find it fascinating.

‘Organization is challenging with six kids and it takes a lot to enforce a good schedule.

‘It’s sometimes hard to keep up with all the laundry too.

‘I do at least six loads of washing each week.

‘But all the kids are really close and get on very well.

‘I love our family and I wouldn’t have it any other way.’