A mother-in-law who has told her son to pay £17 per head towards Christmas has divided opinion online about whether it’s correct to charge her family for their lunch.

The post which was shared on Mumsnet revealed how the mother doesn’t want to prepare the food ‘from scratch’ and would like to order the meal so it will cost more.

Her ‘gutted’ son was so taken aback by the suggestion that he’s now considering going to his partner’s family instead.

Dozens of people saw where the mother was coming from as the festive period can be expensive but others asked why £17, as ‘surely it’s just a posh roast dinner.’

Adding to her post the woman revealed that ‘there’s four adults (including him) and one toddler attending’ the dinner and asked ‘as she doesn’t charge for a normal Sunday roast and it’s just added bits why can’t he bring them.’

The post said: ‘AIBU [am I being unreasonable] to think you should ask family to pay for their Xmas lunch?

‘My partner has just told me that his mother who he’s having Christmas lunch with said she wants £17 per head from him!

‘I’m going to my family’s for lunch so invited him also but he has had it there all his life with his grandparents and siblings too.

‘She said she doesn’t want to do it all from scratch and wants to get it all pre-done so it’s more money, which I understand but he’s gutted and feels like he wants to come to my family now. 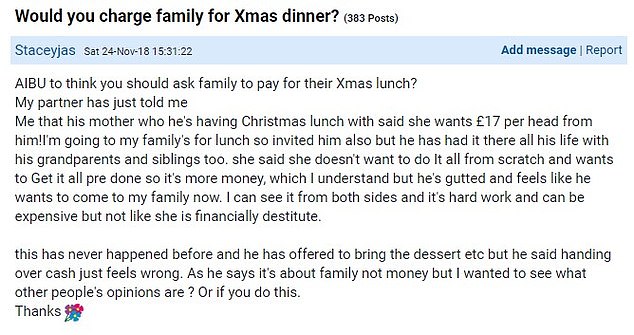 ‘I can see it from both sides and it’s hard work and can be expensive but not like she is financially destitute.

‘This has never happened before and he has offered to bring the dessert etc but he said handing over cash just feels wrong.

‘As he says it’s about family not money but I wanted to see what other people’s opinions are? Or if you do this.’

The responses have divided opinion with some people saying that the mother’s request is unreasonable.

However others see the mother-in-law’s side and agreed that family members should financially contribute to the Christmas dinner.

One person wrote: ‘It’s really expensive to cater for Christmas dinner for a lot of people. I did it one year … for my better off than me in-laws …  It cost me over £400’

And another said: ‘To be honest it sounds like his mother is just fed up with being the only one organising and cooking the Christmas dinner every year. Has it ever occurred to him to pitch in?’

Other users thought charging nearly £20 was a lot of money for dinner, saying: ‘I’d allocate a dish to each person but £17 a head sounds a lot. Surely it’s just a posh roast dinner! What’s she buying??’

One person took the middle ground: ‘It depends if you see it as charging or as chipping in.

‘We ‘host’ Christmas dinner every year, but it’s only here because we have the space for the tables. So everyone chips in to cover it.

‘There’s 29 people this year – no way could we afford to pay for all of that every single year.’