Mother is brutally beaten up while celebrating her 50th

A mother was left covered in blood while her son was seen changing colour as he was strangled during a night out to celebrate her 50th birthday.

Donna Walker suffered a two inch gash on her forehead and a bite mark to her arm after she was attacked by a younger woman in Holmfirth, West Yorkshire, on Sunday morning.

She and her husband had been waiting for takeaway food when they were caught up in a large fight involving another group as one attacker ‘tried to gouge another person’s eyes out’.

Their 22-year-old son suffered bruising to his neck and a minor head injury after someone tried to strangle him during violence which broke out inside the Atlantis takeaway and then spilled out into the street.

Mrs Walker needed a CT scan at Huddersfield Royal Infirmary as medics were concerned she may have suffered an injury to her brain.

Now recovering at home in Linthwaite, Mrs Walker said several people had been involved in the fighting which she compared to a ‘bar room brawl’.

‘I have been given antibiotics and a tetanus for the bite. The doctor said it was worse than a dog bite,’ she said. ‘I have had six butterfly stitches in my forehead.’ 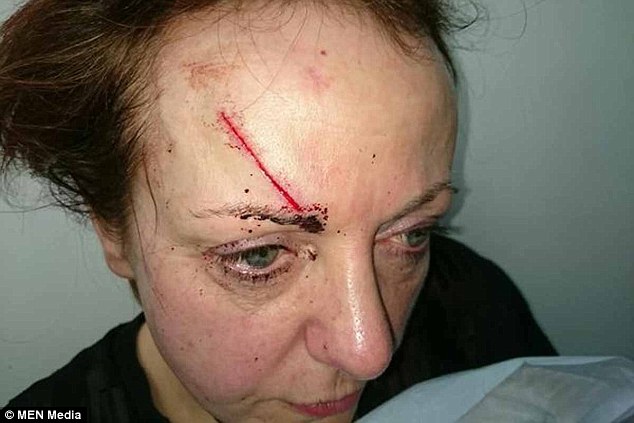 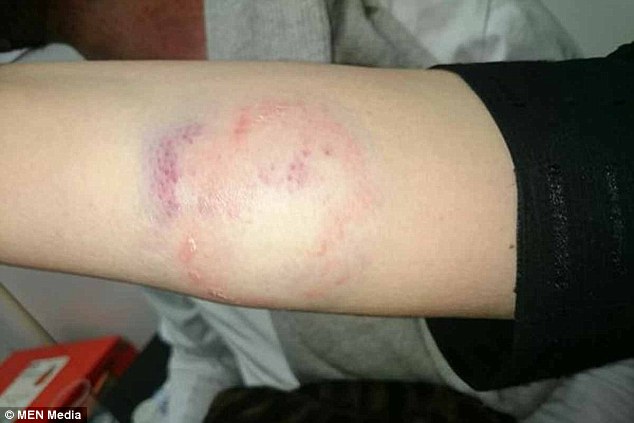 She sustained these bruises in the attack, which her husband was left rescuing her from when he turned to see her covered in blood

She doesn’t know what sparked the violence and hadn’t realised at the time the extent of her injuries.

‘Everybody was asking if I was okay,’ she said. ‘I was saying I was fine but my right eye was starting to blur.

‘I wiped my eye and saw all the blood. I had no idea I had been struck. My son phoned the police and they were there in 15-20 minutes.’ 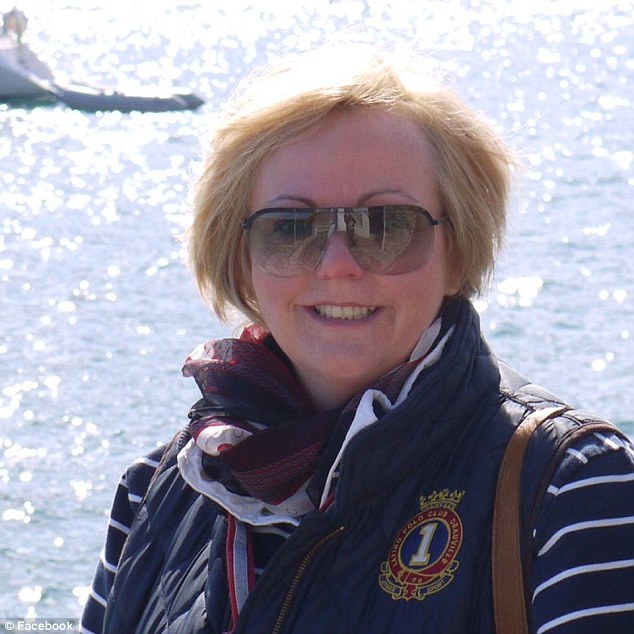 Her 45-yer-old husband, Carlton, recalled how he was left desperately rescuing his wife from her attacker in the small town where the idyllic BBC sitcom Last of the Summer Wine was set.

‘When I saw my wife covered in blood I was horrified,’ he said. ‘One woman was attacking her and one or two others were trying to split it up but it was just escalating.’

At around the same time, two men were attacking one of the couple’s two sons, both of whom had been knocked to the floor. 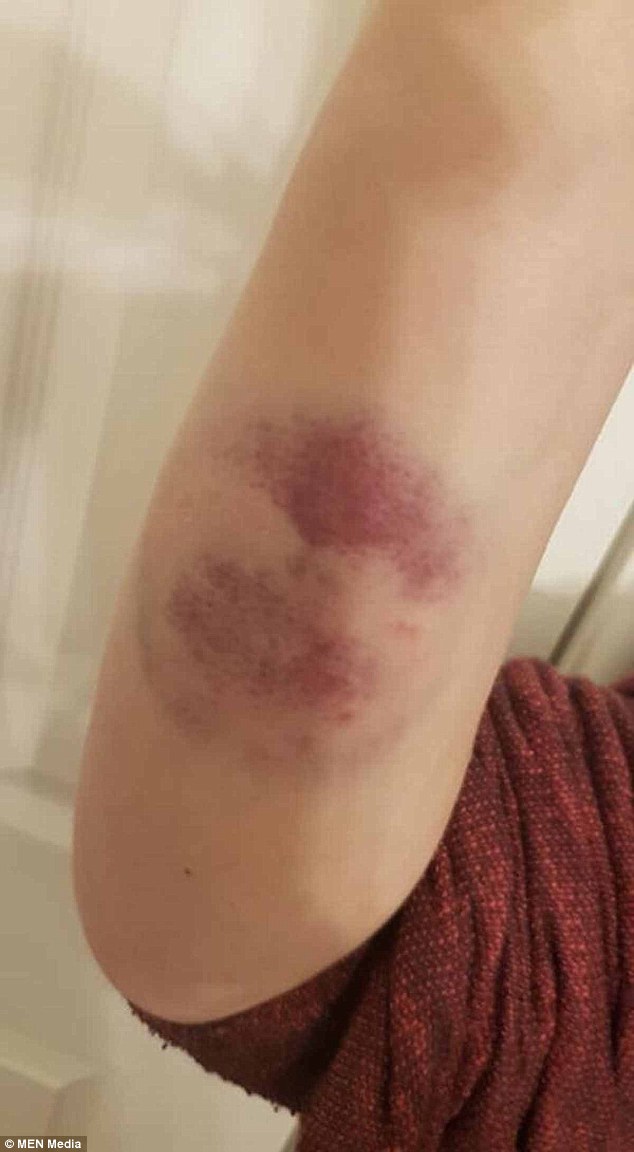 ‘It was scary,’ he said. ‘When the fight spilled out of the takeaway I said to Donna to stay inside. There was trouble outside and my sons were outside.

‘When I turned round my wife was at the doorway being attacked and was covered in blood. My son was being strangled and was changing colour and was on the ground.’

Another attacker was ‘trying to gouge someone’s eyes out’ said Mr Walker, who is originally from Holmfirth.

‘I have never felt such desperation to get my family out of there,’ he said. ‘We were in the wrong place at the wrong time.’ 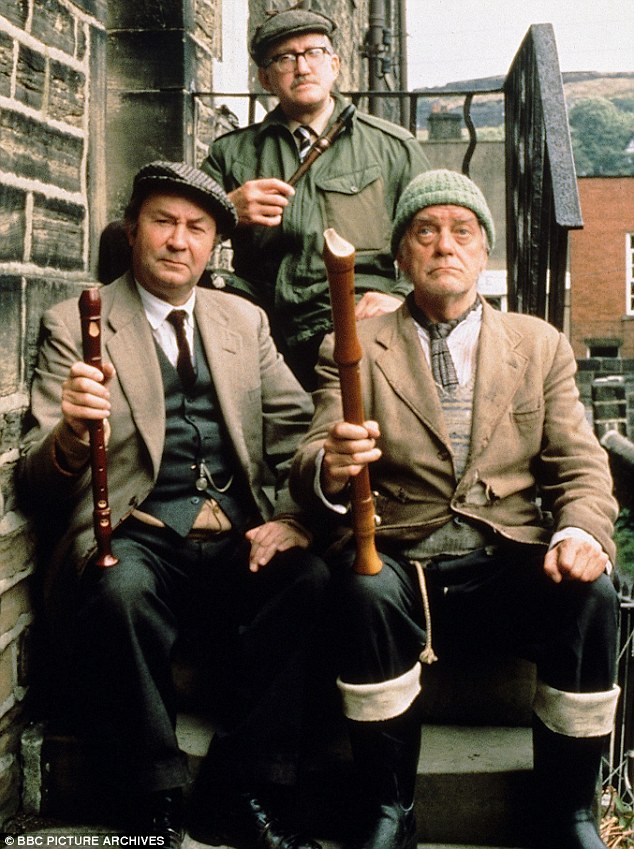 The BBC sitcom Last of the Summer Wine starred Brian Wilde, Peter Sallis and Bill Owen and tracks their characters’ explorations of the sleepy town as they enjoy old age

The couple are appealing for witnesses to contact police.

Mr Walker said: ‘If these people are willing to do someone damage like that they are not fit to be called civilised. If they can’t handle beer they shouldn’t be out.’

A West Yorkshire Police spokesman said officers were called at about 12.43am on Sunday to a report of an affray.

‘Officers attended to find the suspects had left the area but located a 50-year-old victim, who had been injured after fighting broke out between a group of other persons present at the location.

‘The victim received treatment at Huddersfield Royal Infirmary for facial injuries and enquiries are now ongoing to locate those involved in the disturbance.’