A mother-of-one has finally managed to ditch her Bridget Jones-style knickers – after shedding four stone.

Sophie Jude, 23, from Nottingham, dropped four dress sizes, going from a size 16 to a size 8, by ditching comfort food for healthy meals.

Sophie described how she was left ‘mortified’ after her partner Carl saw her oversized pants when she spilt wine over herself on their second date and was forced to get changed.

Sophie, who says she has always struggled with her weight, says she finally decided to make a drastic change after seeing a picture of herself on a night out of friends that ‘made [her] heart sink’.

The skincare specialist, who has gone from 12st 11lbs to 8st 11lbs in just over a year, has now been named Slimming World’s Miss Slinky 2018 after her transformation. 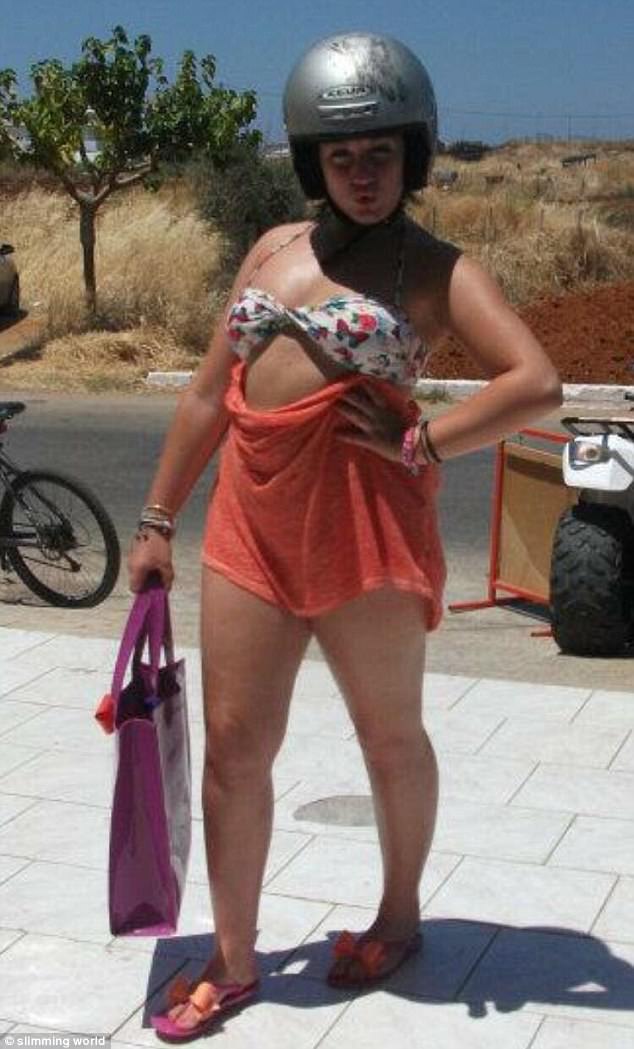 Describing her ’embarrassing’ date with Carl, Sophie said: ‘I ended up spilling a glass of wine on myself and had to change into some of Carl’s clothes while I dried mine on the radiator – including my big control knickers.

‘We laugh about it now but I was mortified to have to put my big Bridget Jones pants on display!’

Sophie, who lives with Carl and one-year-old daughter Vogue, admitted she has struggled with her weight from a young age.

‘At school I was always the curvy girl who tried to cover my insecurities by being bubbly and loud,’ she said.

Breakfast: Cup of tea with 2 sugars, big bowl of cereal and a couple of chocolate biscuits

Lunch: Shop-bought baguette and a cake, or a ready meal

Dinner: A takeaway or ready meal

Evening: A pudding with custard every night – without fail

… and her diet now

Breakfast: Fruit and yogurt or porridge

Lunch: A jacket potato with salad, or a pasta dish with meat and plenty of veg

Mid-afternoon: Some seafood sticks or a Slimming World Hi-Fi bar

Evening: Strawberries with fat-free yogurt and meringue or chocolate bar

‘At the age of 14 I won a scholarship to a performing arts school in London and that’s when my weight really started to affect me.

‘There was a lot of pressure to look a certain way and if I felt down or missed home I would comfort myself with food.’

Sophie recalled a teacher taking her outside of the classroom to tell her that she ‘needed to lose weight’ if she was going to make it in the performing arts world.

‘In the end I became so upset about my size that I gave up on my dream of becoming a dancer because I didn’t feel as though I’d ever be accepted in the industry at the size I was,’ she said.

She said that even though she tried a number of different ways to lose weight, nothing worked in the long term and she continued to feel unhappy with her size into adulthood. 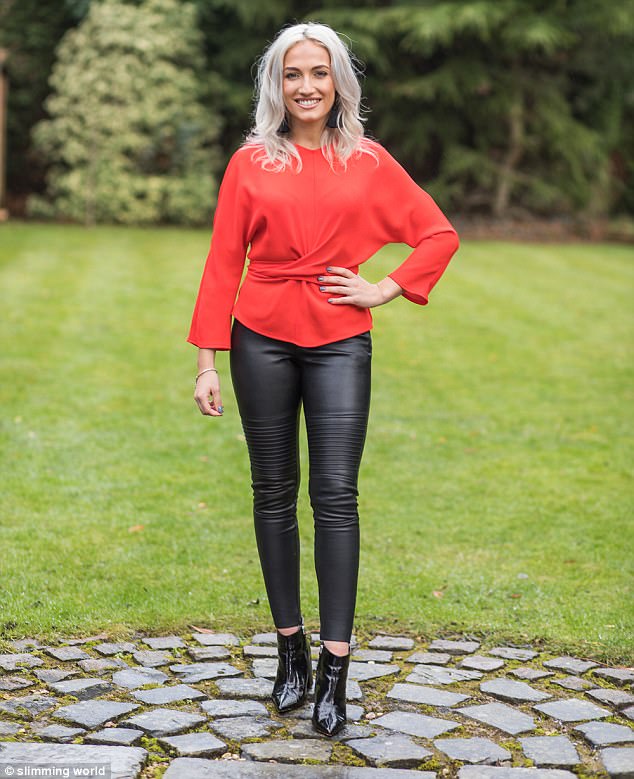 Sophie Jude, from Nottingham, has shed an incredible four stone to go from a size 16 to a size 8

The final straw for Sophie came in the form of a picture taken before a night out with friends shortly after the birth of her daughter, which ‘made her heart sink’ – particularly as she feared that it might be shared on social media.

She says: ‘I’ll never forget that photo. I remember looking at it for the first time and it broke my heart.

‘I couldn’t believe what I was seeing and I felt so vulnerable that people had this awful picture of me on their phone. I was so worried in case one of them decided to share it on social media and in that moment I knew I’d had enough – I didn’t ever want to feel that way again.’

Sophie joined  a Slimming World group in September 2016 with her mum and soon found that – unlike the restrictive diets she’d tried in the past – losing weight didn’t have to mean going hungry.

She found that she could fill up on things like pasta, fish, lean meat and vegetables, while still shedding the pounds.

She says: ‘At first I was shocked at how much I could eat while still losing weight! In the past I’ve tried every fad diet out there – from meal replacement shakes to calorie counting.

‘None of them worked though because they just weren’t sustainable and I’d give up after a couple of weeks. 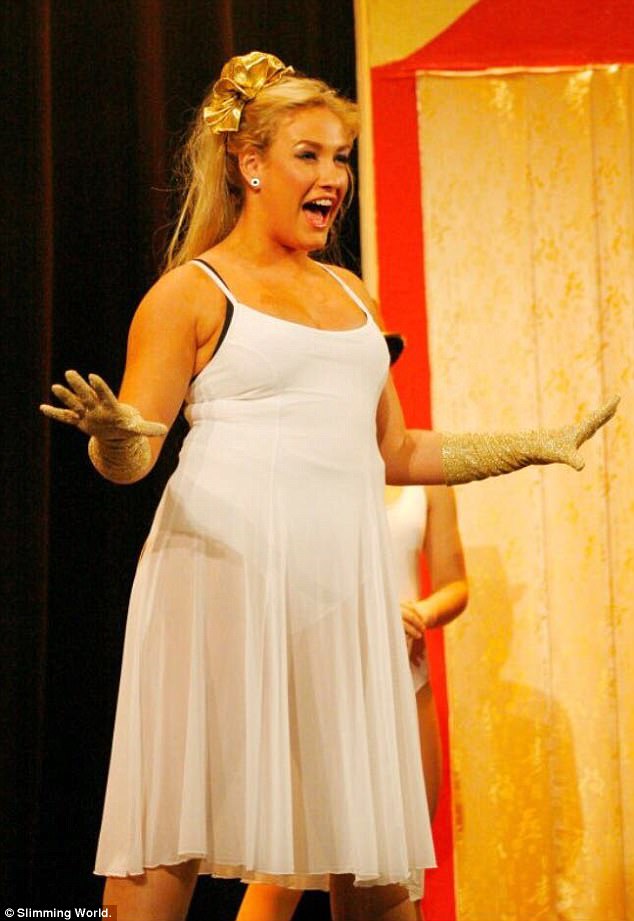 Sophie (pictured on stage) says she has struggled with her weight from a young age, recalling how a teacher at performing arts school told her she needed to lose weight 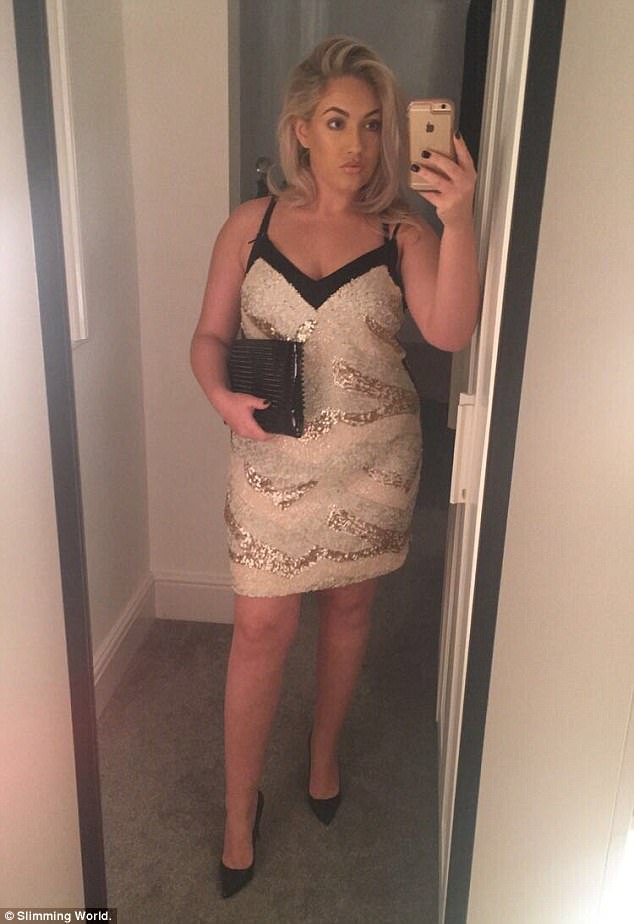 ‘With Slimming World I can still eat curries, pasta dishes, chocolate, wine… and even chips! It’s totally made me rethink my relationship with food and I feel so much better for it.

‘I go to bed each night full and satisfied and I love the thought that I’m learning to cook healthy meals for my family, too.’

Sophie explained how she was ‘nervous’ about joining the group at first, but soon ‘got into the swing of things’.

‘The group was so friendly and although I was upset with the number I saw on the scales that first night, I knew I was in the right place to make a change.

‘I must admit I thought I was destined to be overweight forever, so Slimming World and the support from my mum, my consultant and other members in the group really has shown me that anything is possible. 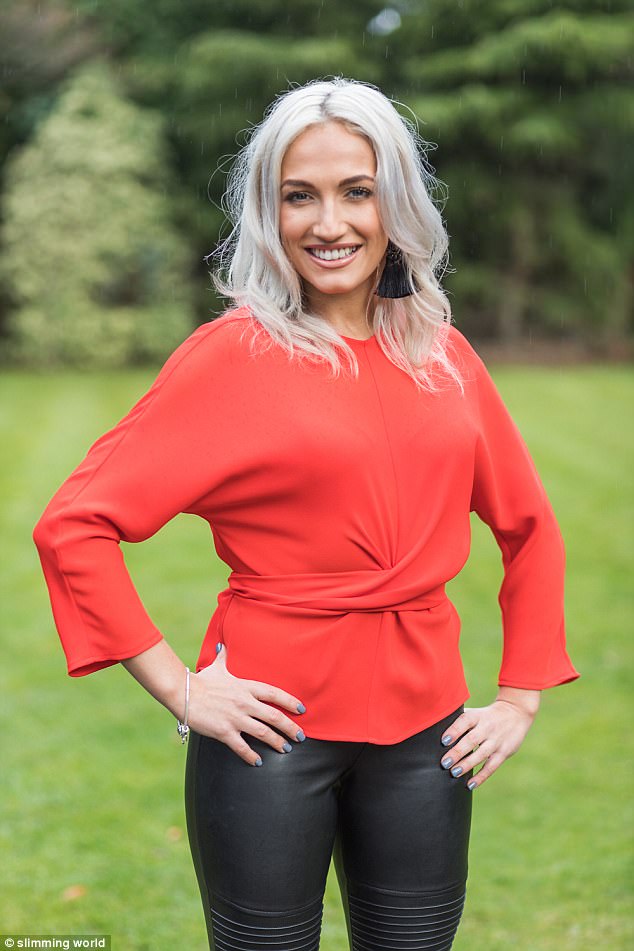 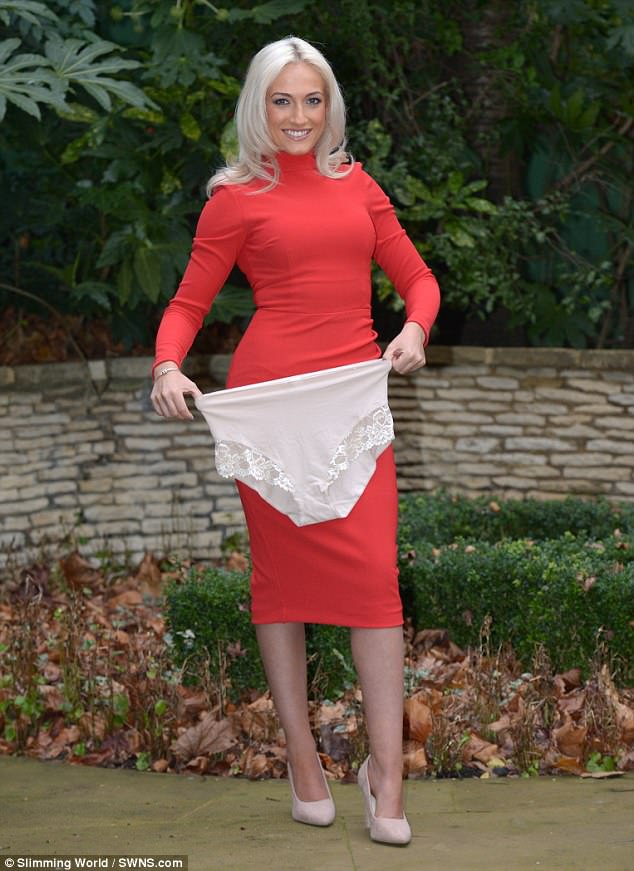 ‘I want people to know that if I can do it, they can too.’

As well as changing her diet, Sophie, who suffers from asthma, has also become more active and regularly goes to the gym, as well as busily running around after her little girl.

She says: ‘Life is just completely different now. My asthma has improved greatly since losing weight and I’m much more active – with plenty of energy to keep up with an inquisitive one-year-old!

‘If I was still bigger I think I’d feel self-conscious taking Vogue to soft play centres – but now I can go up and down the slides with her without a care in the world. 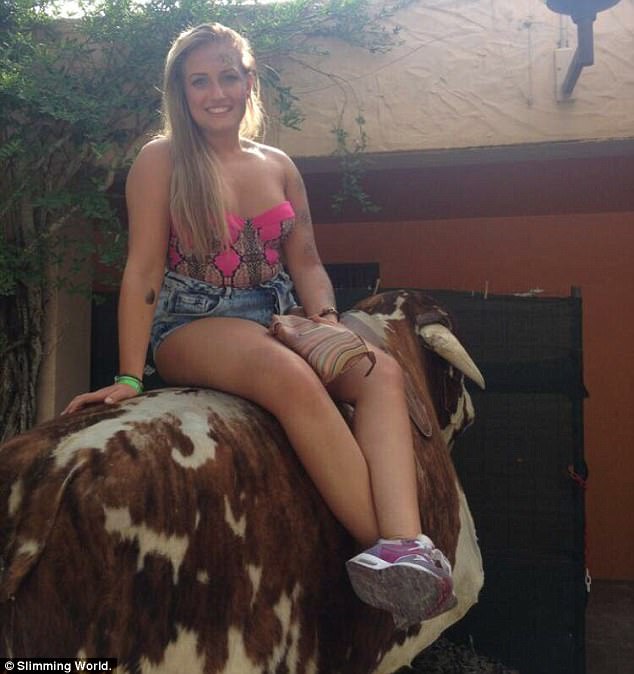 Sophie (pictured before her weight loss) says she had tried a number of different ways to lose weight, but nothing worked in the long term 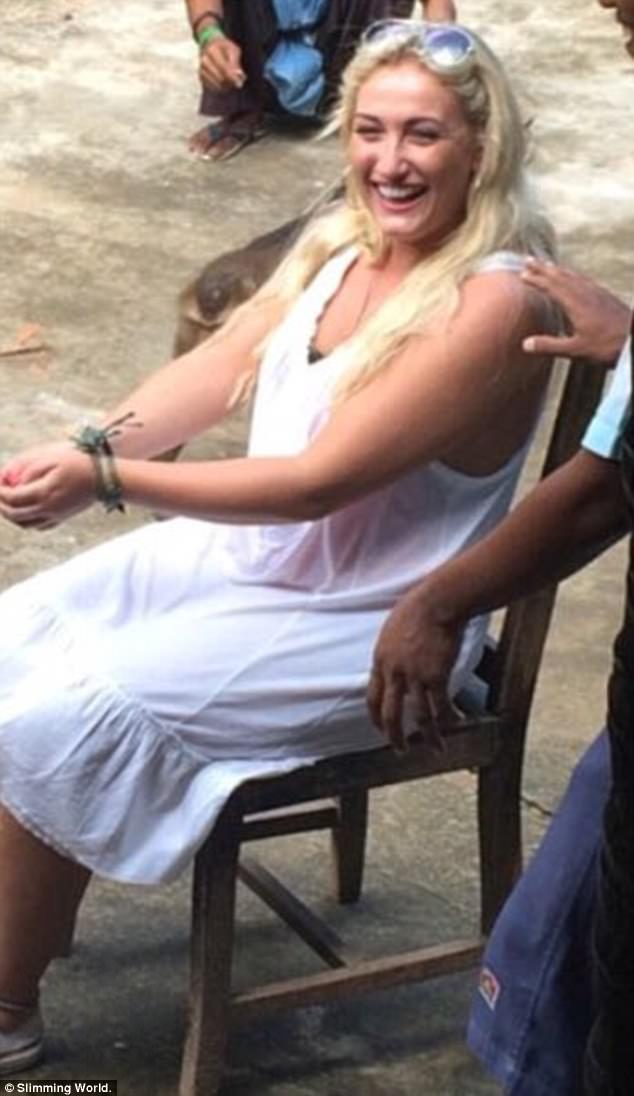 She added: ‘My confidence is sky high too – so much so that I’m going to join a local dance class. It’s been years since I performed in front of an audience and instead of dreading being on stage, I’m really looking forward to it!

‘I used to shy away from the camera but now I have the confidence to pose for pictures with my family and friends without any worries.’

Speaking about her changed outlook on social media, she said: ‘I’ve learned that social media can be a hugely positive place, too. It’s humbling that many people struggling with their weight send me messages and comment that I have inspired them to achieve their weight-loss dreams.

‘Posting pictures of my meals and transformation on Instagram has been a really big help to me on my journey and I’ve been overwhelmed by all the positivity and support I’ve received.

‘Which is handy because, of course, I don’t need the support of my big knickers anymore!’