A mother has issued a chilling warning after she found her two-year-old daughter trapped underneath a large wooden dresser that fell on top of her.

The mum, from New Zealand, said her heart stopped when she saw her daughter’s ‘feet and waist’ sticking out from underneath the drawers.

‘I heard a faint cry and when I opened the door, what I saw was something that will be etched in my memory forever,’ she told Newshub.

The mum, from New Zealand, said her heart stopped when she saw her daughter’s ‘feet and waist’ sticking out from underneath the drawers (pictured)

The mother, who had had been in another room with her other child at the time, said the first thing she did was check the colour of her daughter’s feet to see if she was still alive.

She then managed to pull the dresser up a bit and successfully pull the toddler out.

The child was able to crawl out unharmed but was crying and shivering from the shock of it all.

An ambulance was called in case the infant had suffered any internal injuries – but was later given the all-clear by paramedics.

The mother said she had been planning on securing the dresser to the wall for a while but had put it off due to not owning the right tools.

Since the accident however, her neighbour has helped her fix the cabinet to wall but it hasn’t stopped her from thinking about what could have been.

‘It’s my worst nightmare to make a mistake that could cost my kids their life. I felt that regret in those first moments.My heart sank to my feet, thinking my own complacency could have killed her.’

‘I couldn’t sleep that night thinking that I could have been organising a funeral.’

She warned other parents to follow suit, by getting a friend or family member to help them secure accident-prone furniture in a home occupied by children. 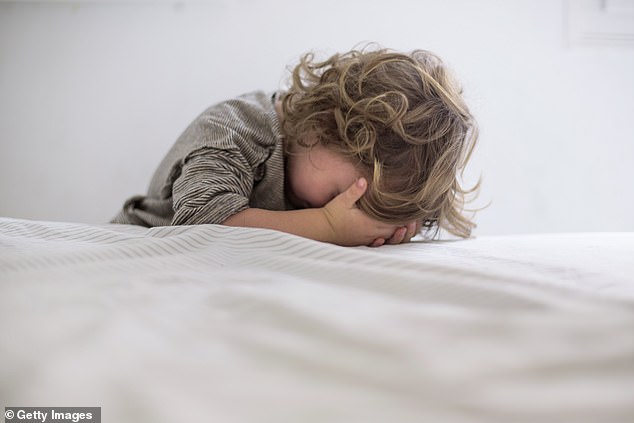 The mother warned other parents to follow suit, by getting a friend or family member to help them secure accident-prone furniture in a home occupied by children (stock image)