A mother has issued a desperate plea for a heart for her poorly son who is unlikely to make it to his second birthday without a new one.

Grayson Heagren, who is 13 months old, was diagnosed with dilated cardiomyopathy at two months old.

The youngster, from Peterborough, Cambridgeshire, was put on the heart transplant list on Christmas Eve last year with his heart function at only 14 per cent.

His mother Shannon Heagren has been told he is unlikely to live beyond two years because the strain on his heart will only get worse as he gets older.

The condition, for which there is no cure, causes an enlarged one side of the heart, making it stretched and weak, and unable to pump blood effectively.

Grayson is frequently in hospital fighting off infections as his other organs are under strain – meaning his family live in constant fear of his heart failing at any time.

Ms Heagren, 24, said her ‘ticking time bomb’ son is always smiling despite having no energy and being fed through a tube.

Grayson Heagren, who is 13 months old, is waiting for a new heart after being diagnosed with the heart condition dilated cardiomyopathy at two months old 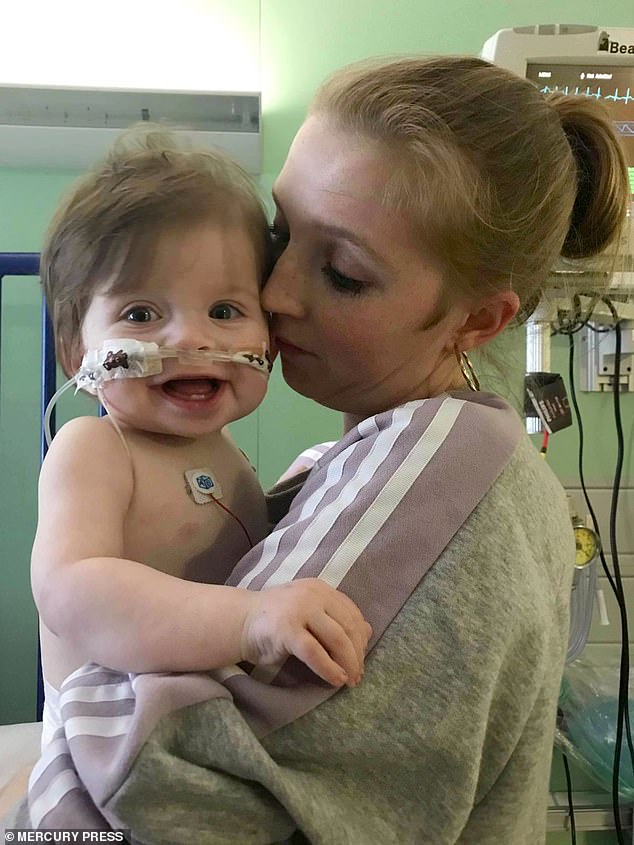 Full-time mother Shannon Heagren, 24, has been told her son is unlikely to live beyond two years because of the strain his heart is under as he gets older 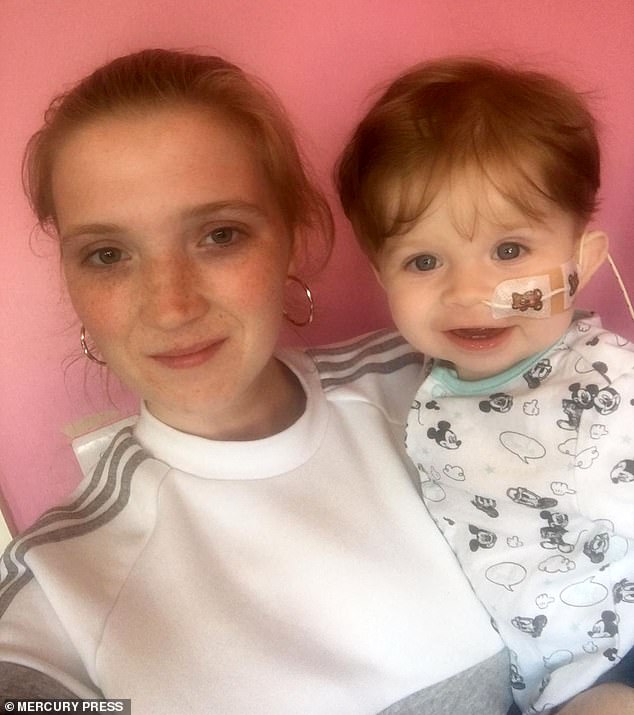 Ms Heagren, said her ‘ticking time bomb’ son is always smiling despite having no energy 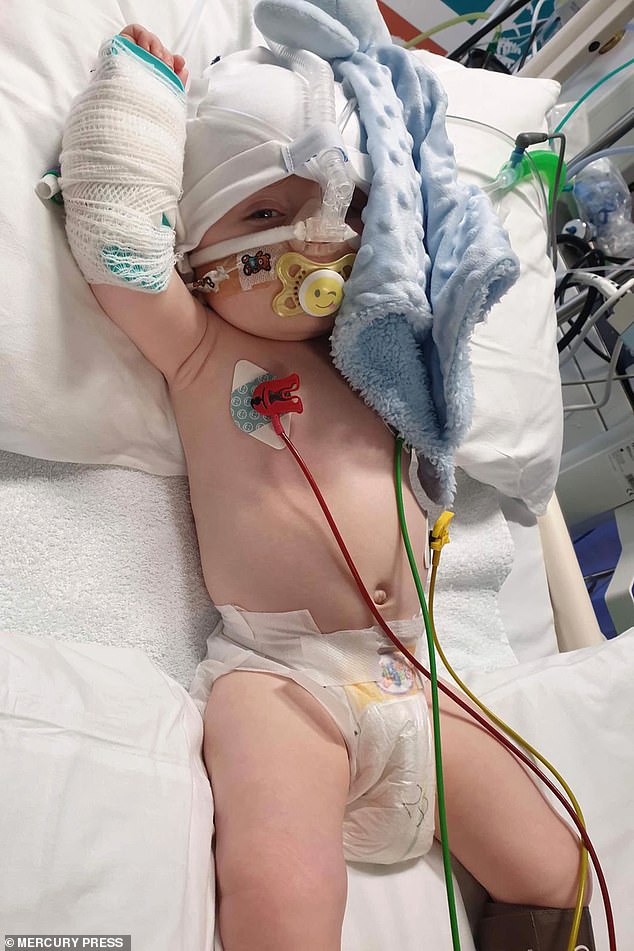 Ms Heagren, a mother-of-four, said: ‘We don’t know how long he will manage without a new heart. They’ve told us it’s unlikely he will make it to his second birthday.

‘It’s a race against time. It’s a ticking time bomb because we don’t know how long it will take and in that time his heart can get worse.

‘He won’t have a future without a new heart. But he’s a fighter so we treat every day as a new day.

‘I live in hope that a heart will be found. I have to for my kids but I find it very hard to keep that hope.

‘I like to believe it will come but the truth is I don’t know. I just know I can’t give up.’

WHAT IS DILATED CARDIOMYOPATHY?

The condition is usually inherited.

All three main types of cardiomyopathy are:

All of these types of cardiomyopathy affect the heart’s ability to pump blood around the body efficiently.

They can also impact the way electrical signals make the organ beat.

There is no cure, however, in most cases people’s quality or length of life is unaffected.

Therapies may include medication, treatment to normalise heart rhythm, pacemakers and, in rare cases, heart surgery or transplants.

If you have DCM, the left ventricle of your heart becomes dilated (stretched or ‘baggy’). As a result, the heart muscle becomes weak, thin or floppy and is unable to pump blood around the body efficiently.

DCM is a common form of cardiomyopathy and research has shown that with proper treatment and follow-up, most people with the condition live a normal life.

However, because there is a very small risk of getting a life-threatening abnormal heart rhythm, a small proportion of people with DCM are at risk of sudden cardiac death.

After Grayson was born, Ms Heagren said she noticed straight away that something wasn’t right because he was breathing fast, couldn’t keep milk down and took a long time to feed.

He was initially kept in hospital for a week and put on antibiotics for an infection.

But after being taken back to Glenfield Hospital in Leicester for a heart scan, Grayson was diagnosed with dilated cardiomyopathy (DCM) at two months old.

Inherited DCM is caused by a change or mutation in one or more genes. If you have DCM, there is a 50 per cent chance that your child will inherit the condition.

But it can also be caused by viral infections, uncontrolled high blood pressure and excessive amounts of alcohol.

The condition affects people of all ages, including infants and children, but is most common in men ages 20 to 50, according to the Mayo Clinic.

Doctors revealed Grayson’s heart function was at 14 per cent and he spent the next four months in hospital – two of which were in intensive care.

Ms Heagren said: ‘When he was brought in they said it was life or death and if I’d left it any longer he wouldn’t have made it.

‘There was one point where they had to put a line into his vein to give him medicine and they didn’t know if his heart would be able to cope or if it would shut down immediately.

‘They told us that we should prepare to say goodbye to him so I called my family and they came to his bedside.’

Thankfully Grayson pulled through, but it was the beginning of a difficult journey. 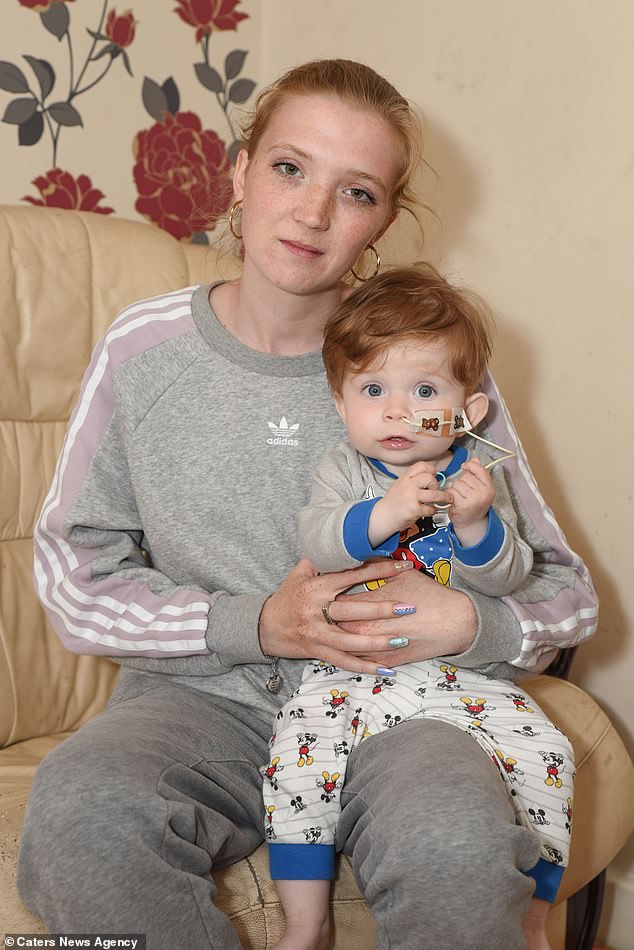 Ms Heagren said she lives in hope her ‘fighter’ son will get a new heart. Pictured at their home in Peterborough, Cambridgeshire 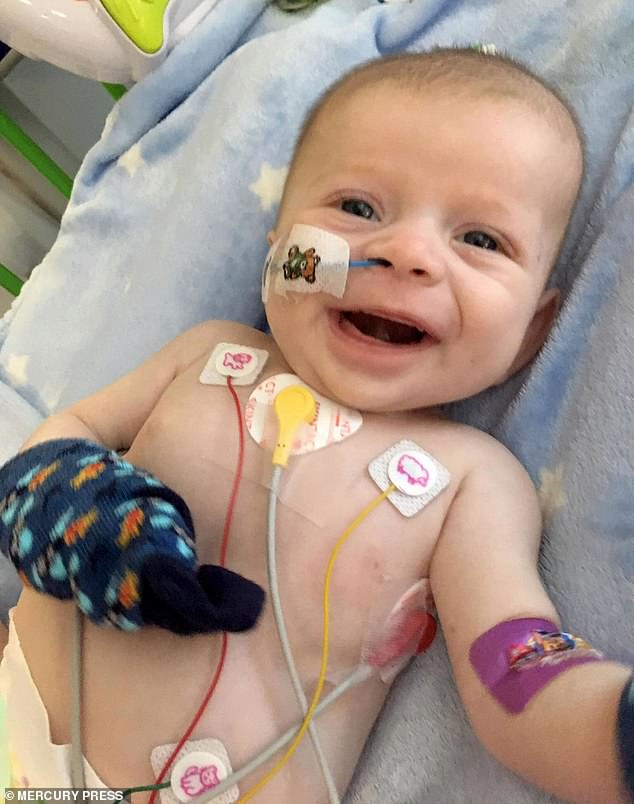 When Grayson was in hospital as a baby after diagnosis, pictured, his family were told to get ready to say goodbye because was so weak 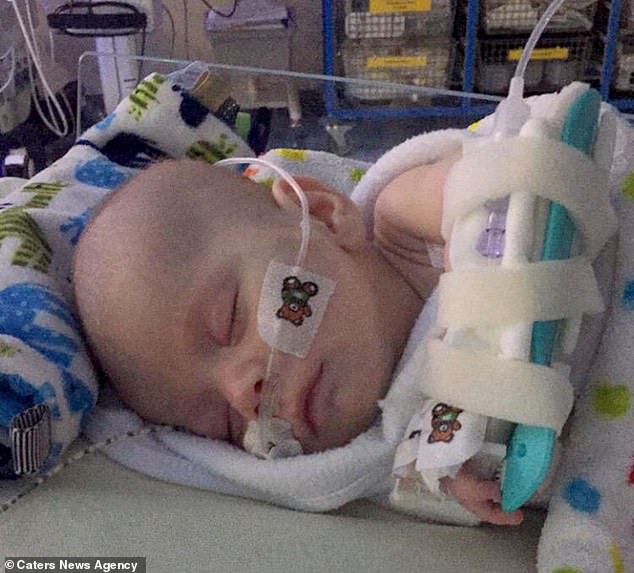 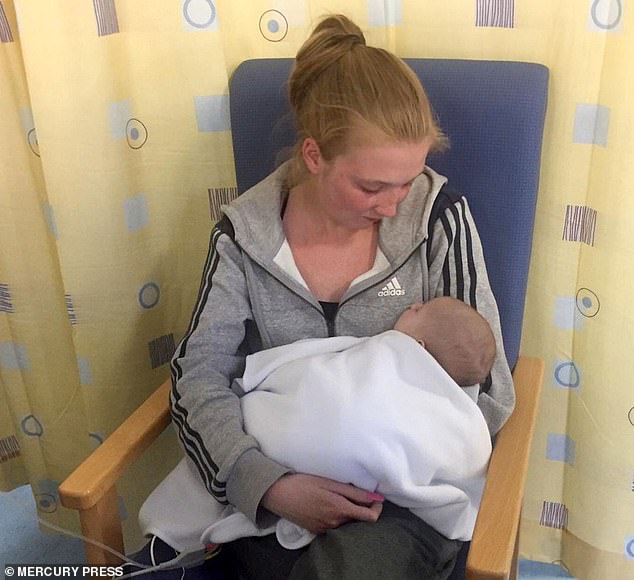 Ms Heagren said: ‘When he was brought in they said it was life or death and if I’d left it any longer he wouldn’t have made it’. Pictured in hospital 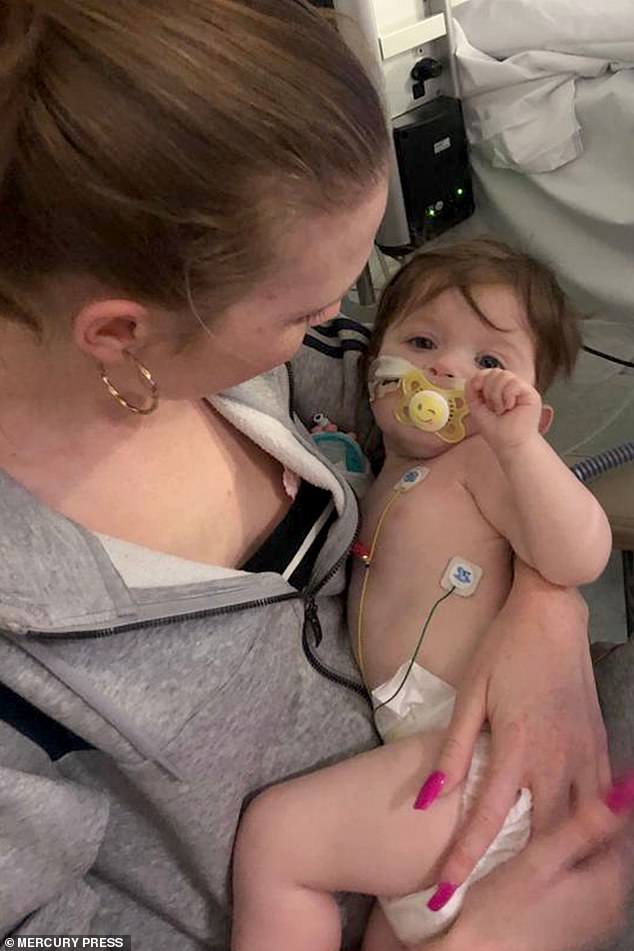 Ms Heagren said: ‘Those four months were horrible. I just spent the whole time crying, I was hysterical.

‘I couldn’t eat or sleep. I just didn’t know what was going to happen.’

Grayson’s heart function is still only operating at 14 per cent which puts a strain on his other organs.

He is unable to eat solid food, therefore has to be fed through a tube, and is on ten different medications to stop his heart deteriorating.

Ms Heagren also has to keep him as calm as possible to try and minimise the strain on his heart and he frequently suffers from chest infections, pneumonia and bronchitis.

Ms Heagren, who has three other children, Amelia, seven, Aiden, four, and Riley, two, said: ‘Because his heart is so weak, he gets sick really quickly.

‘Every time he goes to hospital we don’t know if he’s going to make it out again.’ 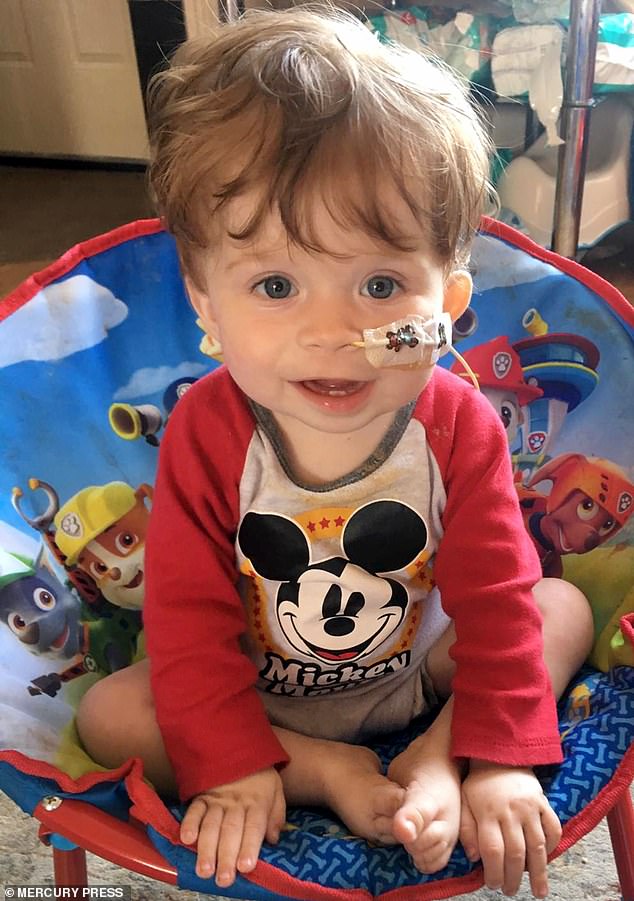 Grayson, pictured at home, has been waiting for a suitable organ donor since Christmas 2018 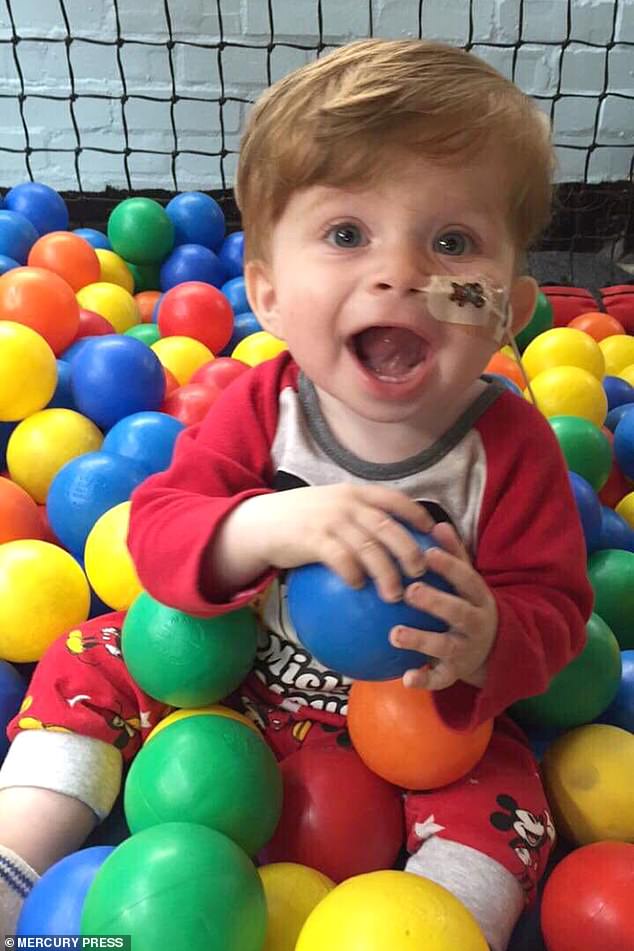 ‘We don’t stop him doing things, but have to try and keep him calm so he doesn’t tire himself out.

‘He’s got no energy and spends a lot of the day sleeping.

‘But he’s a fighter and he’s done really well. Obviously he gets sick, but he’s always got a smile on his face and loves playing.’

Grayson was put on the heart transplant list on Christmas Eve 2018 but so far a suitable organ has not been found.

According to the NHS figures, in August last year there were 280 people waiting for a heart transplant, including 29 children.

Ms Heagren said: ‘We don’t know how long it will take for him to get one. The hearts go to whoever needs it most.

‘We could get a call anytime and we have to be ready to go.

‘I have my phone with me all the time in case it’s them and we’re not even allowed to go out of the country in case we get the call.

‘It’s horrible to think about what the parents of the donor will go through and having to make the decision after losing a child whether to donate their organs.’ 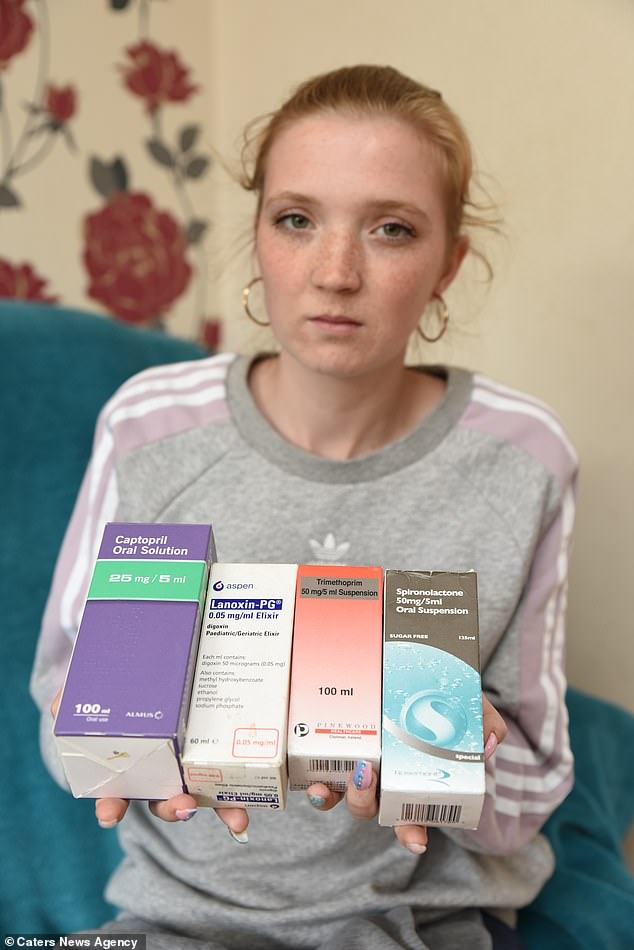 Grayson is unable to eat solid food, therefore has to be fed through a tube, and is on ten different medications (some pictured) to stop his heart deteriorating 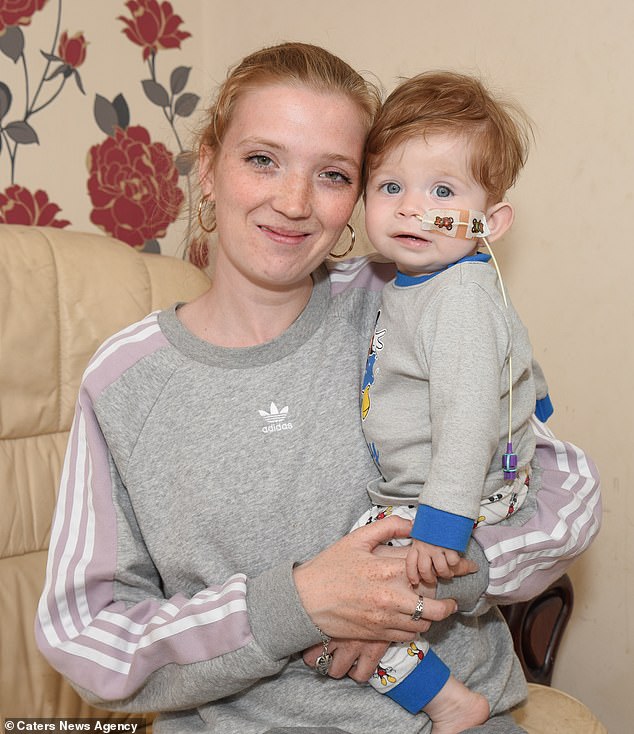 Ms Heagren, pictured with Grayson at home, said: ‘I want to see my boy grow up and go to school. I want him to be able to live a normal happy life’

Around 500,000 people die every year in the UK, but only around one in 100 of them die in circumstances where they are able to donate their organs.

From spring 2020, all adults in England will be considered to have agreed to be an organ donor when they die, unless they have recorded a decision to ‘opt out’ to reduce the number of people who die waiting on the donor list.

Some groups are excluded from the opt-out system. The situation will not change for those under the age of 18, in which case the family are asked to make the decision.

Ms Heagren said: ‘Not many people can imagine having to give their child’s heart away.

‘Before this I wouldn’t have given my children’s away, but now they are all signed up for organ donation.

‘I think it’s so important if it will help someone else live. I see it as it’s comforting to know that your child has helped to save someone else – and in a way they’re living on.

‘I want to see my boy grow up and go to school. I want him to be able to live a normal happy life.

‘But for now we take each day as it comes. We never know what tomorrow will bring but we try and see every day as a new day.’

WHAT IS AN OPT-OUT ORGAN DONATION SYSTEM?

What is an opt-out organ donation system?

Such a system presumes adults consent to donating their organs, unless they explicitly choose not to.

How is it different to the current system?

Max and Keira’s Law, as it is to be named, is the polar opposite of the current system in England. Currently, adults in England have to sign-up to a national register if they wish for their organs to be taken after their death.

Will people be able to defy the law?

Under the new opt-out system, family members are still given a final opportunity to not go ahead with the organ donation. And the rule only applies to those who are deemed mentally capable of giving consent.

Will the whole of the UK move to the opt-out system?

Wales became the first country in the UK to adopt the system in 2015, which was deemed a ‘significant’ and ‘progressive’ change. Scotland is edging ever closer to passing the same opt out organ donation bill and Northern Ireland is expected to follow suit.

Why will an opt-out system help?

Campaigners have long argued such a system would increase the number of organs available. Figures estimate that around 6,000 patients are on the waiting list for an organ. Such lists can be as long as five years.