By Jessica Warren For Mailonline

A mother has issued a warning after she claimed to have repeatedly found strange cross markings on her car windows.

Laura Morgan, from Wallasey, Merseyside, first noticed the marks on her car around two months ago, but thought they were drawn by her children.

She shared pictures of two crosses drawn onto the window of her car, which was parked outside her home.

The markings sparked fears of something sinister, with some believing that they are used by would-be burglars and thieves to communicate with each other.

Laura Morgan, from Wallasey, Merseyside, shared pictures of two crosses drawn onto the window of her car, which was parked outside her home

Ms Morgan said: ‘It took almost two months for me to even realise what was happening, I thought it was kids at first, but it was happening between the hours of 10pm and 6am.’

The most-stolen cars in the last 12 months

Source: DVLA records provided to Rivervale Leasing. Figures are for 1 November 2021 to 28 November 2022

Some criminals use secret markings to indicate things about a property. An X means that the property is a ‘good target’, while a circle with an X through it means that there is nothing deemed worth stealing.

A triangle symbol is used to indicate that a woman lives alone at the property, while vertical lines are used to show valuables inside, The Mirror reported.

The Safeguarding Hub — which shares home protection advice and information across the UK — previously said: ‘Between us, we have a fairly extensive knowledge of burglary.

‘We have spent many hours speaking to distraught victims, visiting crime scenes and dealing with burglars. We have actually seen and experienced these symbols being used by criminals.

‘This is not to say that this is a common practice between bands of thieves, for most burglars work alone. We do not want to scaremonger and we can say confidentially that the use of these symbols is very rare.

‘But, if you are a caregiver to an elderly or vulnerable person and spot strange marks outside their home, do you really want to dismiss it out of hand without just ensuring that the symbol is legitimate? 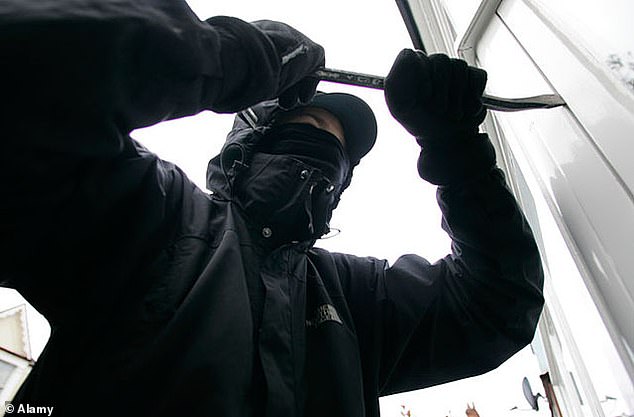 Some criminals use secret markings to indicate things about a property. File image

Security firm Keytek has also highlighted the issue saying: ‘These “robbery markings” or “burglar signals” are basic sketches and forms that are supposedly used as a “code” to determine whether a house is worth targeting.

‘These illustrations are also supposed to indicate to other thieves what type of person lives at the property, such as whether the residents are vulnerable, elderly, or live in a single-family home.’

It added: ‘Chalk is the main material burglars use as it is easily removed and not as noticeable as materials such as spray paint markings outside the house.

‘As well as burglar chalk signs, burglars mark houses with almost anything they can; it may be a small blob of paint or a piece of string tied around a lamppost.’