A mother has been left unable to walk after her Achilles tendon was sliced by a bottle of Lambrini that smashed after falling through an ‘inadequate’ Tesco bag.

Eve Weller, 26, had bought the alcohol just seconds earlier and walking home when the bottle ripped through a carrier bag and shattered on the pavement.

A large shard of glass went straight through the back of her ankle and sliced her tendon and down to the bone. 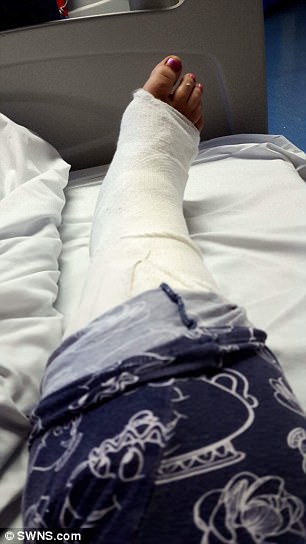 Surgeons were able to re-attach the fibres – which connect muscle to a bone – but the mother-of-two has been left in agony and unable to walk.

The sales leader from Plymouth, Devon, has hit out at the supermarket for their ‘inadequate’ bags.

Eve said: ‘When you see the injury you would never expect it was caused by a bag breaking. It’s appalling. The wound is really, really deep.

‘A bag should be strong enough to hold a single bottle. They should last more than 20 minutes. They should test for this sort of stuff.

Avon sales leader Eve bought the £2 75cl bottle of Lambrini from Tesco Metro in New George Street, Plymouth, to share with her mother Paula Walker, 49, during a planned movie night in. 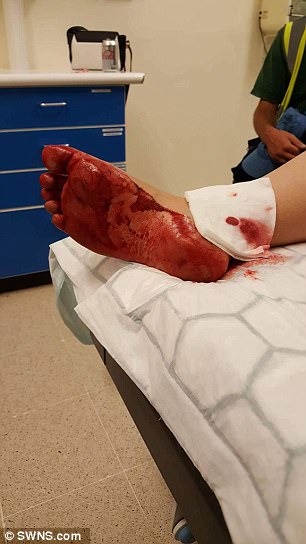 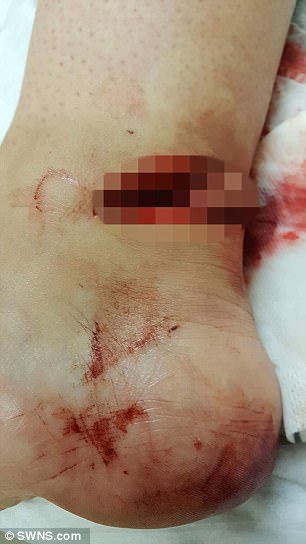 Ms Weller’s leg being tended to in her hospital bed. The bottle’s shards cut right down to the tendon

She put it in a single 5p bag – without any other items – and left the store to get the bus home.

But the bag split after she got off the bus causing the bottle to smash to the ground.

‘At first I didn’t even feel it as I just thought ‘oh no I’ve dropped the wine’.

‘I looked down and saw a bit of blood and went to get a plaster out my bag as I always carry them for the kids.

‘I went to move my foot and I just couldn’t move. I looked down and there was this river of blood.

‘I don’t really remember everything after that.

‘A man stopped to look after me and was trying to keep me conscious while someone rang the ambulance.’

After 30 minutes paramedics still hadn’t turned up so a passing police car gave her a lift to Derriford Hospital, on August 1. 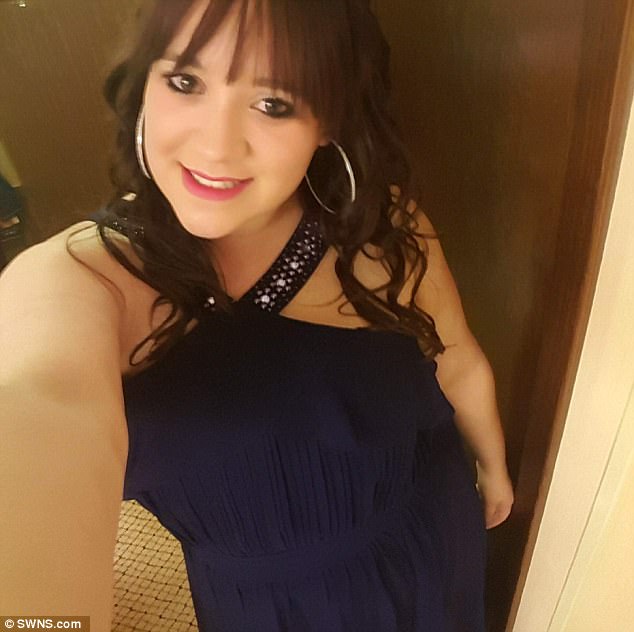 The sales leader from Plymouth, Devon, has hit out at the supermarket for their ‘inadequate’ bags 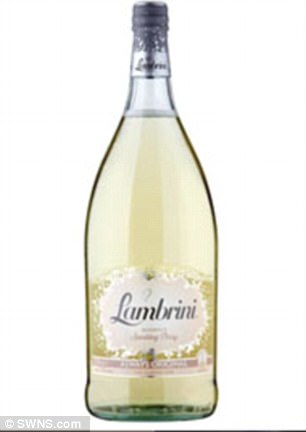 Her injuries were caused when a bottle of Lambrini smashed

‘Initially they thought it was just a really bad cut but they did an x-ray and realised I had cut my achillies tendon. They said it was an 100 per cent laceration.

‘A bit of bottle must have bounced up and gone straight in and out. It was unbelievable.

Eve spent four night sin hospital before she was discharged to recover at home with oral morphine and antibiotics.

But she is trapped in her third floor flat because it does not have a lift and she is only able to shuffle slowly using a zimmer frame.

She has her leg in plaster and soft bandages and doctors said it could be up to a year before the tendon is fully healed.

Eve, whose partner Morgan O’Neill, 36, is a council refuse worker, has complained to Tesco who have sent her an email apologising.

An email from a member of its customer service team said: ‘I was shocked to see the extent of your injury and I really do hope everything will be alright and you make a full recovery.

‘As explained, as soon as our Head Office in Dundee receive your letter they will be in touch with you within 14 days.

‘If there is anything else I can help you with please let me know.’

Eve is urging them to ensure their bags are up to scratch for carrying the items they sell in the shop.

‘When you buy a bag you expect it to at least survive the journey home,’ she said.

A Tesco spokesperson said: ‘We take great care to ensure our carrier bags are strong and robust so they safely hold our customers’ shopping. We are urgently investigating Miss Weller’s claim and we will update her with our findings.’