A pregnant mother whose waters broke three months early endured a stillbirth after bungling midwives dismissed fluid in her pants as sweat.

Kate Pateman, 30, from St Neots, Cambridge, went to hospital after discovering her underwear was soaked with an unknown fluid in June 2016.

But instead of checking if her waters had broke, Ms Pateman was told she was simply sweating heavily in the summer heat.

The mother-of-two went home reassured that she’d give birth to a healthy full-term baby girl, given that it was three months before her due date.

A check-up at 32 weeks revealed her baby wasn’t growing properly, but the midwife never reported it and it was never investigated.

When Ms Pateman went into labour at 39 weeks, medics discovered she didn’t have any amniotic fluid, which protects and helps babies develop in the womb.

After a seven-hour labour, her daughter Poppy was stillborn – a tragedy experts say could have been avoided if she’d been induced two weeks earlier.

Amniotic fluid helps the baby to develop, and protects them from bumps, infections and injuries. Babies will not grow normally without an adequate amount of the fluid.

The trust which runs the hospital has since apologised and admitted responsibility for the poor care Ms Pateman received.

Tragic: Katie Pateman, 30 with stillborn daughter Poppy after a torturous seven-hours in labour 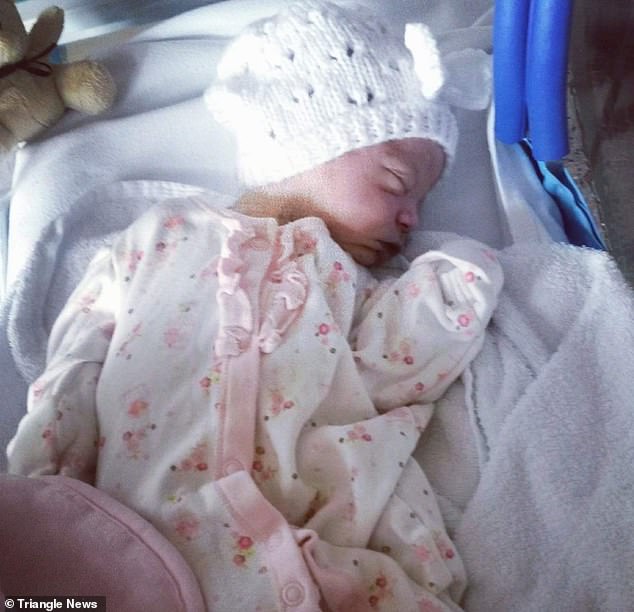 The stay-at-home mother is set to receive thousands of pounds in compensation after the string of blunders at Hinchingbrooke Hospital in Huntingdon.

She said: ‘Still to this day, I can’t believe it happened. I didn’t think it would ever happen to me. Now it’s something I’ve got to live with for the rest of my life.

‘Sometimes I’ll just be driving along and suddenly I’ll think about holding her and how she was cold and I’ll get chills down my spine.’

It is believed that she was suffering from a rare condition called ‘oligohydramnios’, which causes too little amniotic fluid.

The fluid is essential for the baby to move and grow. Oligohydramnios can lead to deformation, umbilical cord compression and death.

WHY DO BABIES NEED AMNIOTIC FLUID?

The amniotic sac is a bag of fluid inside a woman’s womb (uterus) where the unborn baby develops and grows.

The amniotic sac is filled with clear, pale, straw-coloured fluid in which the unborn baby floats and moves.

The amniotic fluid helps to cushion the baby from bumps and injury, and maintains constant temperature for the baby.

It also helps the baby’s lungs, digestive system and musculoskeletal system to develop.

The amniotic sac starts to form and fill with fluid within days of a woman conceiving.

Amniotic fluid is mainly water. The unborn baby swallows the amniotic fluid and passes tiny amounts of urine into the fluid.

The amount of amniotic fluid increases gradually during pregnancy until about week 38, when it reduces slightly until the baby’s born.

What happens when my waters break?

Before or during labour, the amniotic sac breaks and the fluid drains out through the vagina. This is commonly known as your waters breaking.

If your waters break before your labour starts, you’ll notice either:

– a slow trickle from your vagina, or

– a sudden gush of water that you can’t control

Phone your midwife or the hospital for advice.

If you plan to give birth in hospital or a midwife unit, you’ll probably be advised to go in at once.

Without amniotic fluid, your baby is no longer protected and is at risk of infection.

The charity Tommy’s says on its website: ‘Your baby’s amniotic sac has to have the right amount of amniotic fluid for the pregnancy to continue normally.’

Always speak to your midwife or GP if you’re concerned about any aspect of your health when you’re pregnant.

Ms Pateman said: ‘The leaking continued throughout the pregnancy. It wasn’t much per day but by the time I went in to give birth there was none.

‘I complained that my knickers were very wet and I felt like something was leaking.

‘I know now that they should have sent off this liquid to see exactly what it was but they just said that I could be sweating.

‘It wasn’t enough to make me think my waters had broken so it never really crossed my mind.’

Ms Pateman first learned that Poppy was in danger after being rushed to the maternity ward on September 14 – around her expected due date – to give birth.

She said: ‘At about 12pm I rang the midwives and told them I had labour pains and they told me to come in.

‘So as far as we were concerned, everything was normal and we were ecstatic and we couldn’t wait to meet our baby girl.

‘But I had last felt the baby move at 4pm and now we believe that was her last ever movement.

‘That will always stick in my head because it felt like she was dropping down for labour.’

Ms Pateman added: ‘When they looked for her heartbeat, the consultant couldn’t find it and finally she just turned to me and said “I’m sorry, there is no heartbeat, your baby has died”.

‘And I can’t even explain that feeling, it was just terrible.’

The mother then had to endure a seven-hour labour following the tragic discovery before giving birth at 7am on September 15.

She said she will never forget the moment she was handed her tiny daughter, who weighed 4lb 11oz.

She said: ‘She was placed in my arms and – oh my god – she was so perfect though tiny.

‘She just looked like a baby sleeping. And it was just absolutely heartbreaking.’

Ms Pateman discovered she was pregnant with Poppy in January 2016, when her son Tyler was three years old.

But she had her first inkling that something was wrong when she was five months pregnant.

She said: ‘Around 22 weeks I think, my hands just became numb and I read online that it wasn’t a good sign. I raised it with my midwife but she reassured me that I was fine.

‘I also mentioned that I couldn’t feel her move much but she said maybe she wasn’t a very active baby. I felt her move a couple of times a day but the movements were subtle. 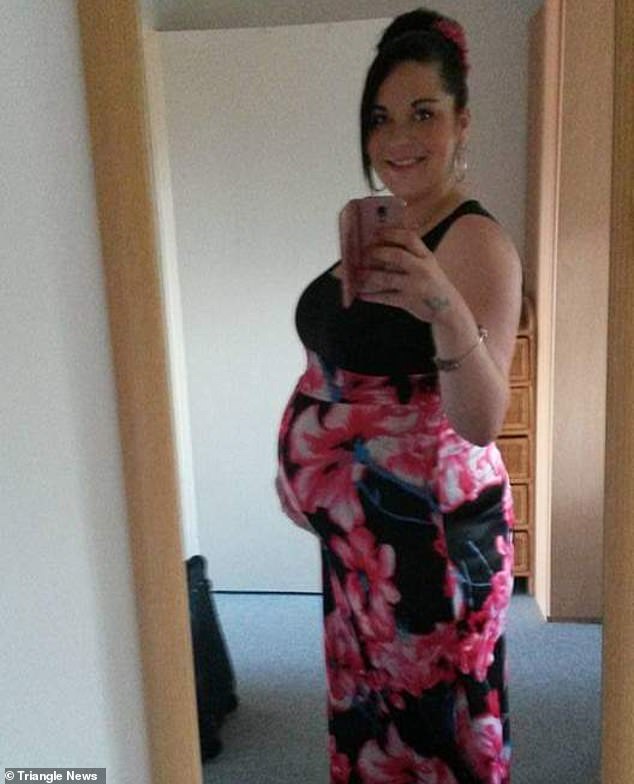 ‘I’d had a kick chart with Tyler but this time I didn’t and the staff just relied on natural movement.

‘But my bump was big and normal and I felt about the same size as I did with my son.’

Then two weeks later, Ms Pateman frantically alerted midwives after discovering fluid in her pants. She was reassured and sent home.

But the mother suffered another setback at 32 weeks when the midwife noted Poppy was not growing properly after measuring Ms Pateman’s stomach.

But still no action was taken to investigate.

Ms Pateman, said: ‘The midwife had plotted on a graph that the baby was small and I wasn’t growing at the right rate.

‘But still, she never did anything and I will never know why. I won’t ever have the answer to that.

‘It should have caused massive alarm bells along with everything I’d mentioned.’

An independent report found that if Ms Pateman had been referred to a consultant obstetrician in the following weeks, an ultrasound would have revealed the baby was underdeveloped.

The report, written by consultant obstetrician Suresh Duthie, stated: ‘On the balance of probabilities, if Miss Katie Pateman had undergone induction of labour at 37 weeks gestation, Miss Poppy Pateman would have been delivered alive and in good condition.

‘However, as the pregnancy was allowed to continue to 39 weeks gestation, the result was intrauterine death of the baby.

‘In my opinion, Miss Katie Pateman received substandard and unacceptable care at the Hinchingbrooke Health Care NHS Trust in 2016.’ 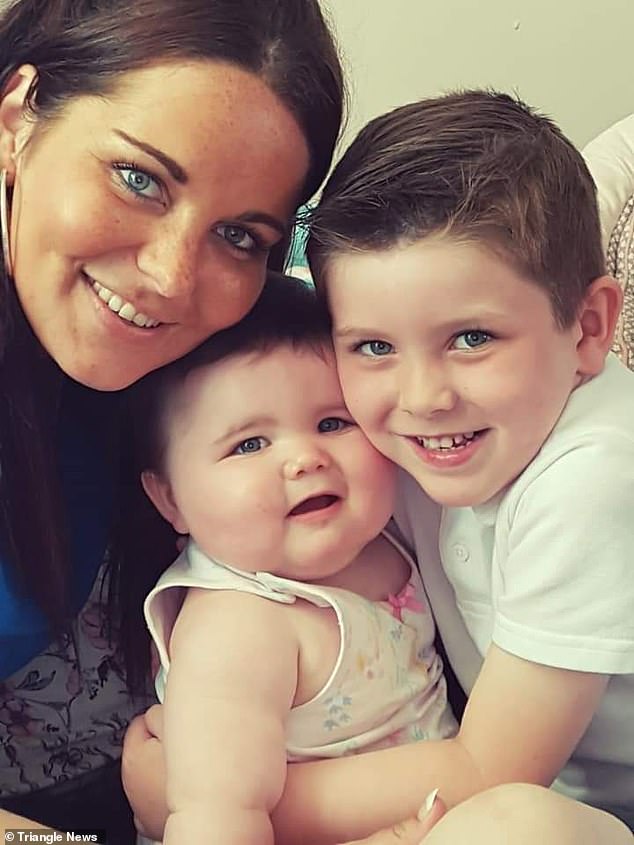 Fran Stephens, head of midwifery and divisional head of nursing at North West Anglia NHS Foundation Trust – which runs the hospital, apologised for the failings.

She said: ‘We are very sorry that there were failings in the care of Ms Pateman and her unborn child at Hinchingbrooke Hospital in September 2016.

‘The Trust accepted responsibility for those failings at the time.

‘A full investigation was instigated and as a result lessons have been learned and procedures changed so that the tragic outcome that Mrs Pateman suffered would not happen again.

‘Sincere condolences were extended to the family for the loss of their baby and support was offered.’

Milli Hill, founder of the Positive Birth Movement, said women needed to be listened to if they raise concerns.

She said: ‘Unfortunately women’s voices are not being listened to or taken seriously across health care and the birth room is a real crucible for this. In this case the consequences were devastating.

‘I think there is, unfortunately, a huge imbalance of power in maternity care that perpetuates this problem, and it’s awful to hear of the tragic consequences this has had in this case.’