A mother who lost one of her six-day-old twins after her delivery was left in the hands of three inexperienced midwives has accused NHS staff of failing her.

Nicola Baines, 35, gave birth to a healthy baby boy naturally at Wythenshawe Hospital in Manchester, but her placenta burst while daughter Eleanor was still in the womb.

An inquest heard that as she attempted to carry on with the birth, unaware of danger, three midwives in the delivery theatre talked among themselves and tried to call for a doctor only to be told all were ‘busy’ in theatre. 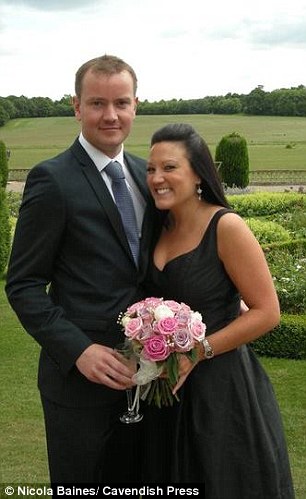 Nicola Baines, 35, pictured with her husband Colin, gave birth to a healthy baby boy naturally at Wythenshawe Hospital in Manchester, but her placenta burst while daughter Eleanor was still in the womb

Eventually a doctor arrived at the delivery room and Mrs Baines was transferred to theatre for an emergency caesarian section.

It emerged the three midwives present at the delivery of the first child had never worked on a twin birth.

A doctor was present in the delivery room for five minutes but left before problems arose over Eleanor.

At a Manchester inquest Mrs Baines, a marketing manager from Hale, near Altrincham Greater Manchester said: ‘I do believe the standard of care fell below the standard expected and there was miscommunication between staff.’

The tragedy occurred after Mrs Baines, whose husband Colin is an accountant, was admitted to the hospital on September 15 2016 after her waters broke.

She said: ‘I was taken to the triage room and at this point I was in quite a lot of pain. I didn’t see any doctors around and I know I wasn’t examined by any. 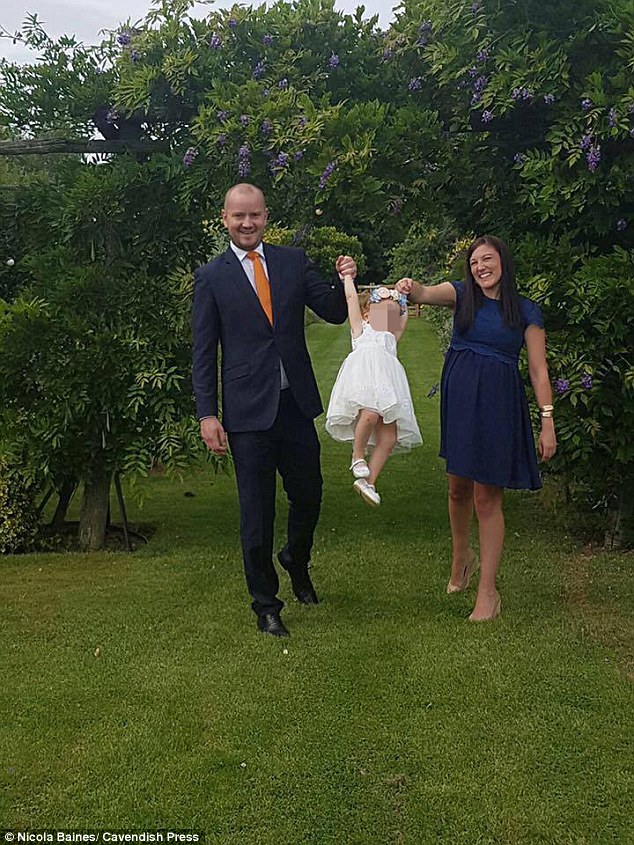 In a statement after the hearing Mr and Mrs Baines said: ‘It is hoped that Wythenshawe Hospital have learnt lessons from what happened on the day of Eleanor’s birth so that similar situations do not arise in the future’

‘Lucas was delivered very quickly and I was on all fours at this point. I said to the midwife: ‘how long until the next one?’

‘Pretty much at the same time I felt my water rupture and this is when I was asked to turn on my side because there was a query about the position of Eleanor.

‘There seemed to be some kind of discussion about what they were feeling and that’s when they called a doctor to examine me. I never had any concern at that point – there was no indication of any issues.

‘When the doctor came over I thought we were dealing with a breached birth but I was then told it was the placenta that could be felt and I needed an emergency caesarean.

‘Initially I said I didn’t want a caesarean because at this point I didn’t realise my baby was at any risk. I was transferred to theatre and Eleanor was born in very poor condition. We were moved to St Mary’s Hospital but she died on the September 21.’

Midwife Stephanie Richardson said: ‘Before Ms Baines I had been present for several twin births but I had not actually experienced a twin delivery myself. I was asked by the senior midwife to take Nicola Baines who was coming in by ambulance as the lead midwife. It seemed like she was in the advance stages of labour.

‘I did communicate at some point that this was my first twin birth but I can’t remember at what point. We managed to get the cardiotocography machine on but I noticed there was a paper jam and I asked someone to fix that but Mrs Baines was already starting to push at that point.

‘Guidelines suggest that a doctor should be present in the room and an ultrasound after the birth of twin one should be considered. A doctor was there to fit a cannula but there was no communication and she left the room.

‘After twin one had been delivered I pressed the call bell for assistance and another midwife came to wrap twin one but then left the room. It was then that we had difficulty finding the heart beat for twin two. That is when two other midwives came in. At that point I asked for a doctor but I was told they were busy in theatre.

‘There were four people in the room at this point and there was a discussion about needing a doctor. In hindsight, I would have insisted that the doctor stayed in the room. Both myself and the doctor have reflected and said that communication should have been better. In my experience if doctors are aware of a twin delivery they don’t leave.

‘I made the decision to artificially rupture the membrane to induce labour and after this an obstetrician came. Since this delivery, I have been the lead midwife again for another twin pregnancy a couple of months after. Following this case I received special online training and there is now a study day once a year for twin pregnancy emergencies.’

Another midwife Gloria Hartley said: ‘I asked midwife Richardson if she would be happy to take Mrs Baines and she said yes no problem.

‘I had explained to the doctor that the mother was coming in and the intention was that we would all be there and support would be given. I stood by the door waiting for the ambulance and myself and the doctor ad a conversation about Nicola Baines.

‘My expectation, generally speaking is that the midwife would look after the mother until the delivery of twin one but you would always have a doctor after for when twin one was delivered.

‘Neither myself or the doctor were in the room when twin one was delivered. I had left the room to get the hormone drip which is needed after the delivery of the first twin. When I left, in the room was Steph and two other midwives. I was shocked to find out that not one of these midwives had delivered a twin pregnancy before.

‘I had to go and deal with an emergency and my assumption was that the doctor would be there to help Mrs Baines. I thought the policy was that there was always a doctor in the room. For every twin pregnancy I had been involved in there has always been a doctor. I think this should be trust policy and it is now trust policy in light of these events.’

Senior midwife Angela Cook said: ‘There should have been a registrar present in the room after the birth of twin one. Things can often go wrong between the delivery of twin one and twin two.

‘This developed into a very urgent situation and should have required the registrar to be present. I would have expected continuous use of the tracing machine in between the birth of twin one and twin two. As soon as twin one was born if expertise was not in the room at that point, the emergency call bell should have been rang.’

Dr Maha Hassan said: ‘I was told there was a twin pregnancy coming and I was in theatre at the time. I was asked to cannulate Nicola Baines and I was in the room for about five minutes. I didn’t carry out an assessment of Mrs Baines because at that stage there wasn’t any concern raised by the midwives.

‘I had expected to go back in about 15 minutes. But in the corridor a student midwife approached me and said: ‘We need you in room seven because we think we have a breached baby.’ I was very surprised when I went into the room and I came to the view that it was a placental abruption. It looked like this had occurred very quickly.

‘The midwife should have informed me if someone was 9cm dilated and I should have told the midwife my plans. Since this I have been on a four-day course in communication.’

Recording a narrative conclusion, Coroner Fiona Borrill said there was ‘an absence of monitoring of the foetal heart rate.’

In a statement after the hearing Mr and Mrs Baines said: ‘It is hoped that Wythenshawe Hospital have learnt lessons from what happened on the day of Eleanor’s birth so that similar situations do not arise in the future.

‘We hope that this inquest will go some way in raising awareness of the importance of continually questioning and challenging standards of care to ensure less families have to face the same devastating consequences as ourselves.’