A new mother to her second child, 35-year-old Taylor Cochrane figured that sex was just painful in the summer of 2016 because she’d recently given birth.

But, just in case, she went for an ultrasound. What it revealed completely altered the course of Taylor’s life.

She was diagnosed with an extremely rare form of ovarian cancer that strikes less than one in one million people. The chance of surviving five years is just 10 percent.

With no time to lose, Taylor, an attorney from Nebraska, was started on such an aggressive treatment plan that the therapies meant to save her life nearly killed her.

But three years after her nightmare began, Taylor is still here to raise her children and in remission three years later, thanks to the grueling experimental stem cell treatment she credits with giving her a shot at life after cancer.

After the birth of her daughter, Penelope, now three (left), sex was increasingly painful for Taylor Cochrane (center, with son, Reid, five). An ultrasound revealed she had a rare form of ovarian cancer, which has just a 10% five-year survival rate

The Nebraska lawyer, was already a mother to her son, five-year-old Reid, and was overjoyed to welcome her daughter Penelope, now three, in June 2016 with her husband Jim.

Unfortunately, when she was three months postpartum, Taylor developed abdominal pain and bloating.

She would wake up from night sweats, and having sex with her husband became painful.

At first ‘I brushed it off as postpartum healing,’ Taylor said.

Taylor visited her gynecologist to make sure her IUD – intrauterine device for contraception – was still in place because she thought if it had been dislodged then it could have been causing the symptoms.

The implant was fine, so Taylor was sent away with no concerns and her troubling symptoms were put down to postpartum. 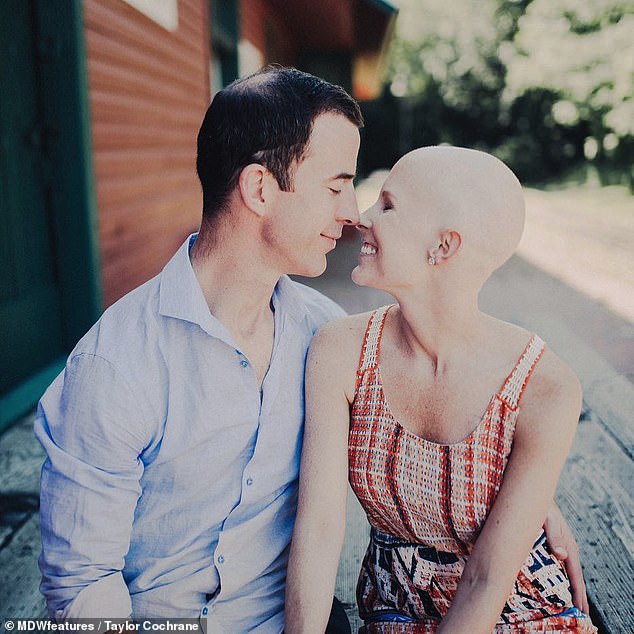 She and husband, Jim, also 35 (left) already had two young children, so Taylor had gotten an IUD placed and thought it could be causing her pain in 2016, but doctors said that wasn’t it

By January 2017, the pain grew much worse and Taylor knew something was seriously wrong this time.

‘I called my gynecologist again and thankfully, she listened to me and didn’t brush me off or attribute it to stress, or something similar,’ she said.

On January 19, Taylor had a trans-vaginal ultrasound which revealed a shocking five-inch mass on her right ovary.

‘I felt in my gut that it was cancer, but I tried to push those fears away,’ she remembers.

‘It seemed impossible and I always thought ovarian cancer was an older women’s disease.’

Three days after the scan, Taylor was already in surgery to have the mass and her right ovary removed, but the mass had to be sent to Harvard so the type of cancer could be confirmed as it couldn’t be identified locally. 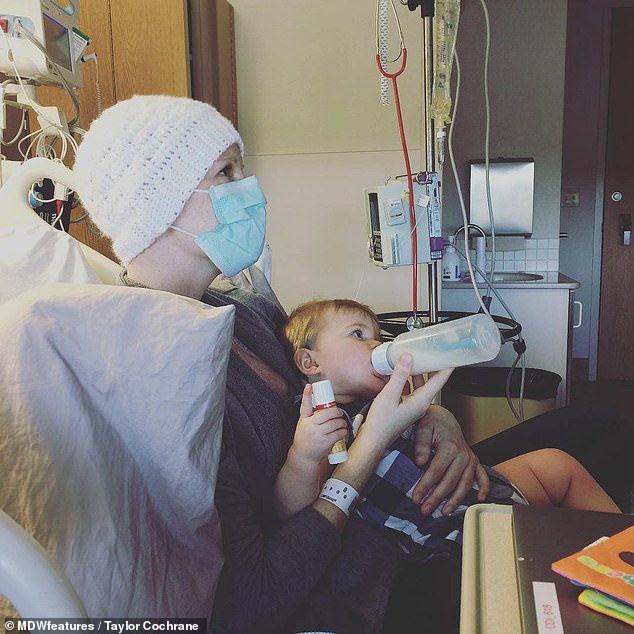 As Taylor’s cancer treatment began, Penelope was still too young to even eat solid food. As she bottle fed her infant daughter, Taylor had to wear a mask to protect her weakened immunity

This is an incredibly rare form of cancer, with only 250 known cases globally at the date of Taylor’s diagnosis, and just a 10 percent chance of long-term survival.

Following the surgery, Taylor did six rounds of chemotherapy which required her to be kept as an inpatient for three days at a time.

Following chemotherapy, Taylor had her other ovary removed in July 2017 as well as the affected lymph nodes.

As the specific form of cancer is so rare, there was little data for specialists to use but it was agreed that Taylor’s best chance for survival was to have a stem cell transplant to wipe out any remaining cancer.

‘At the time when I was diagnosed, there were only 250 cases in the world, and it carries an extremely grim prognosis, no matter the stage,’ Taylor says.

But she couldn’t let the odds keep her from forging ahead with treatment.

Once she had recovered from her July surgery, she began a still-experimental treatment using stem cells. 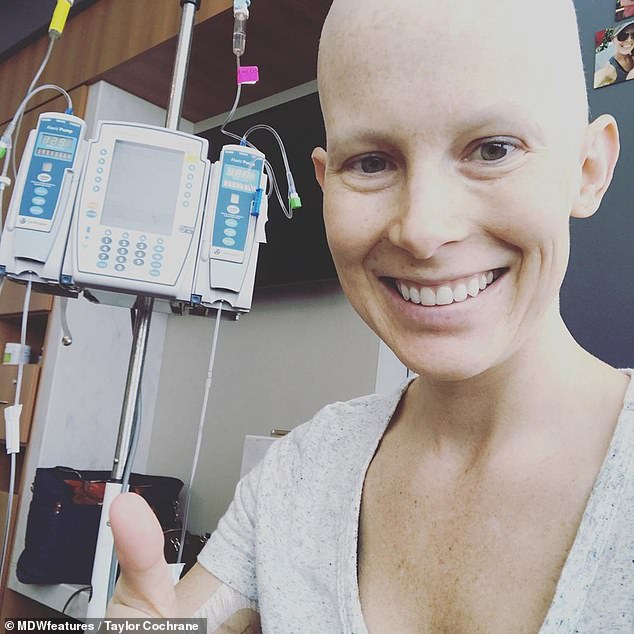 Taylor had to undergo chemo to treat the cancer, then a second, higher dose round after her stem cell transplant in order to suppress her immune system so she wouldn’t reject the cells. The chemo made her hair fall out

‘The stem cell transplant almost killed me at the time, but it has saved my life,’ Taylor recalls.

‘The stem cell transplant is intended to wipe you out and replace you with healthy stem cells.

Before the treatment, Taylor had felt almost normal, surprisingly so.

But stem cell therapy brought the severity of her illness – and therefore the aggressiveness of the treatment she’d need to beat it – very much into focus.

After getting the stem cell transplant, she had to immediately start an eight day high-dose course of chemotherapy to suppress her own immune system so she wouldn’t reject the stem cells – a process called conditioning.

‘I underestimated how weak my body already was, and how hard my conditioning would be,’ Taylor said.

‘What’s funny about cancer is you don’t necessarily feel sick until you do treatment, since the treatment kills so many healthy cells, so you just feel like death.’ 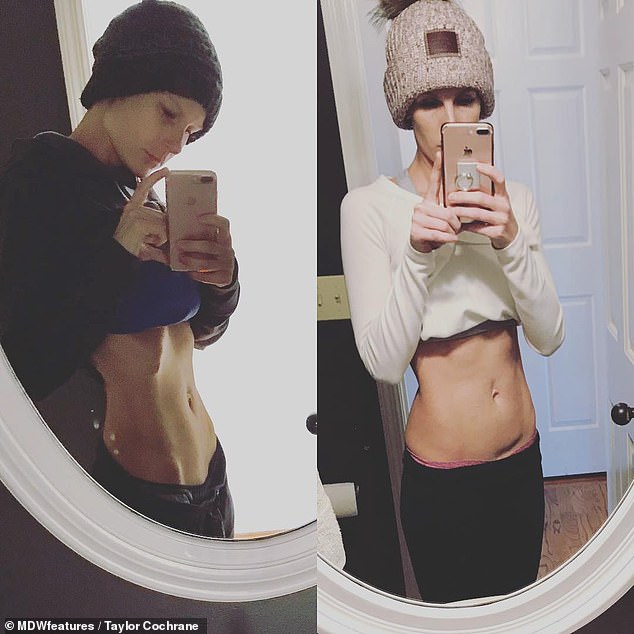 Her stem cell transplant made Taylor feel sicker than the cancer itself had, and the already-petite lawyer completely lost her appetite – and significant weight 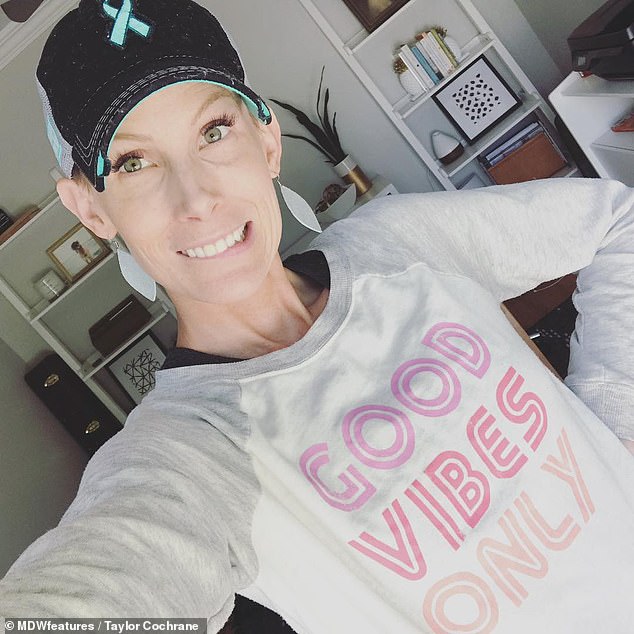 As she lost weight, Taylor’s face shape changed, but she kept up a positive attitude, and took up mental health and acupuncture to help maintain her mental health

Suddenly, even activities as basic as eating were unbearable, even impossible.

‘I couldn’t eat for about a month after returning home from the transplant – I couldn’t even swallow water because my mucositis’ – a side effect of chemo that makes the digestive tract swell and develop ulcers – ‘was so bad,’ said Taylor.

‘Then, once I was able to eat, I wasn’t absorbing any nutrients, and I could almost literally feel myself wasting away.

‘I survived on forced meal replacement shakes with loads of IV pain medicine to manage it and started getting better slowly.’

While the meal replacements provided enough nutrition to keep her alive, Taylor lost substantial weight. The aggressive chemo made her lose all her hair. 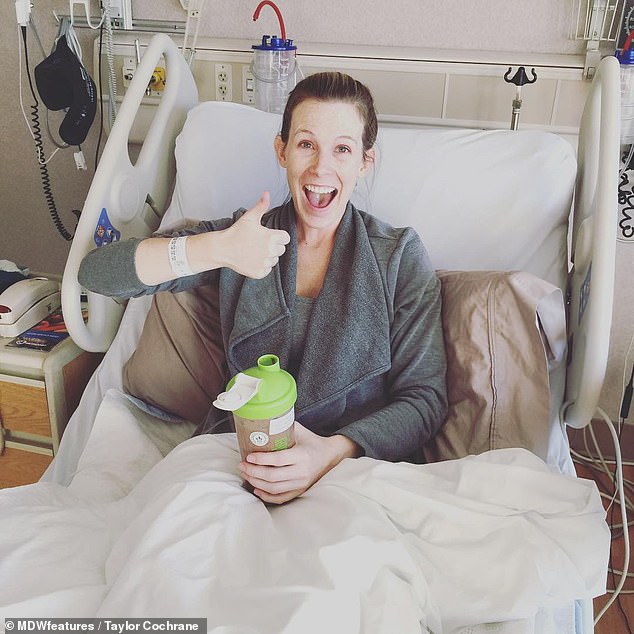 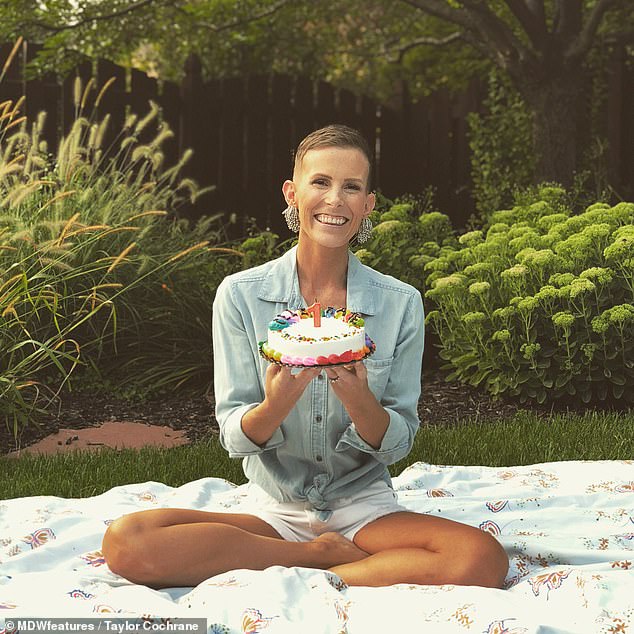 But the grueling treatment worked. Her scans were clear of cancer four months after the stem cell transplant and in August 2018 she celebrated one year since the treatment

The changes were dramatic, and Taylor worried that her illness would scare her children, but the last thing she wanted was to keep anything hidden from her children or push the away.

‘We have been very open with the kids and they know mummy took medicine that made her lose her hair, and that she is tired a lot, but I think it will be a couple more years until they fully understand,’ Taylor said.

Fortunately, as her children are so young, they likely couldn’t wrap there heads around the frightening odds their mother faced.

When they are older the couple will explain to Reid and Penelope the battle that their mother bravely fought.

While she felt like her life and sanity were hanging by a string, Taylor took up meditation and acupuncture, complementary practices that doctors increasingly encourage patients to use alongside cancer treatments to help manage their symptoms. 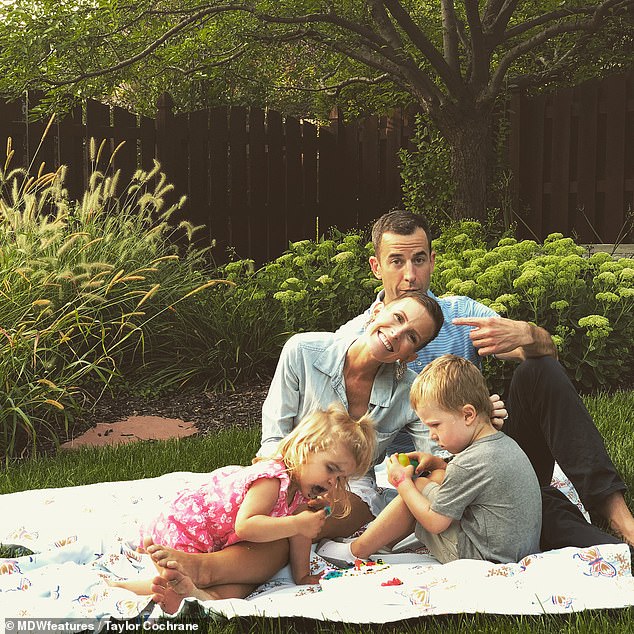 Taylor’s hair is starting to come back, and someday when they’re old enough to understand, she and Jim plan to tell Penelope and Reid the story of how bravely their mom battled cancer

‘I don’t think I’d still be alive had I not combined the two. The holistic practices helped me live through treatment.’

About four months after her stem cell transplant, it was time to find out if the treatment had worked.

On December 4, 2017, tests confirmed that Taylor was in remission as there was no further evidence of cancer.

To date, Taylor continues with her holistic practices, including meditation and acupuncture to maintain her mental and physical well-being.

So far, she’s beaten incredible odds, and hopes that as treatments continuously improve, more patients will do the same.

‘I want people to know that there is hope!’ she says.

‘Find it wherever you can and use it to advocate for yourself. New treatments are being found constantly.’