Mother of 20-month-old twins who BOTH have cerebral palsy is raising £97,000 for surgery

The mother of 20-month-old twins who were both born with cerebral palsy is trying to raise £97,000 for private treatment because she doesn’t want to wait for the NHS.

Nicola Johnston, mother of Matthew and Lucy, says her infants won’t be put on the health service’s waiting list until they are three, and could then face a six-year wait.

Instead, Mrs Johnston, 42, says she is ‘determined’ to raise money to pay for private surgery to give the children a chance at walking before they start school.

Surgery to cut nerves in the children’s spines and loosen up their stiff muscles will cost £48,500 per child but Mrs Johnston and her husband, David, 41, said they will ‘do everything we can’ to give their toddlers a normal life.

20-month-old twins Lucy and Matthew Johnston, (pictured with parents Nicola, 42, and David, 41) were both born with cerebral palsy and diagnosed around six months ago

‘To find out that one child has cerebral palsy is a shock to your system,’ said Mrs Johnston, from Farnborough in Hampshire.

‘To find out that both of your twins have it is unheard of. When we found out, it broke me for a bit. But then it made me stronger.

‘I was so determined they were going to overcome it that I dismissed all the doubt in my mind that they were never going to walk or do the things other children can do.’

Lucy was diagnosed with cerebral palsy caused by a condition called periventricular leukomalacia (PVL) – a brain injury caused at birth – when she was 14 months old.

Her parents noticed when she appeared to be developing more slowly than her brother, Matthew.

But when doctors examined Matthew as well they found he had spastic diplegia, a form of cerebral palsy making his legs too stiff and weak for him to stand.

Lucy is the worst affected – she cannot move her legs properly, struggles to sit up on her own and cannot react quickly enough to stop herself falling over.

Doctors believe specialist surgery called a selective dorsal rhizotomy will enable Matthew to move on his own, and the same surgery could help his sister too.

But Mrs Johnston claims her twins can only join the NHS waiting list when they turn three years old.

And even then they could face a further six-year wait until they can receive the surgery. 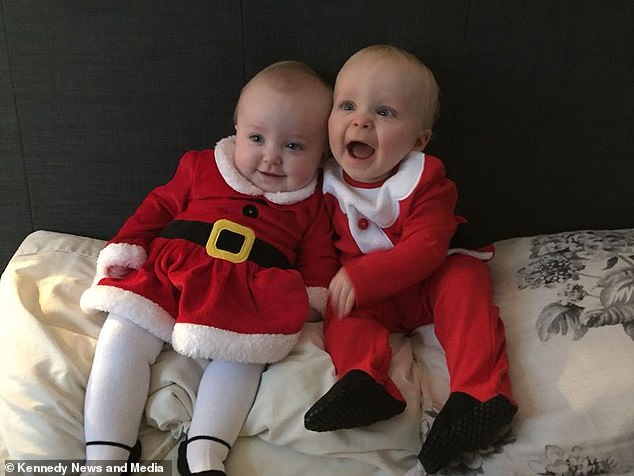 Lucy (left) and Matthew (right) both suffer from muscle stiffness as a result of their conditions, meaning Matthew cannot stand on his own and Lucy, who is paralysed from the waist down, struggles to sit upright without help 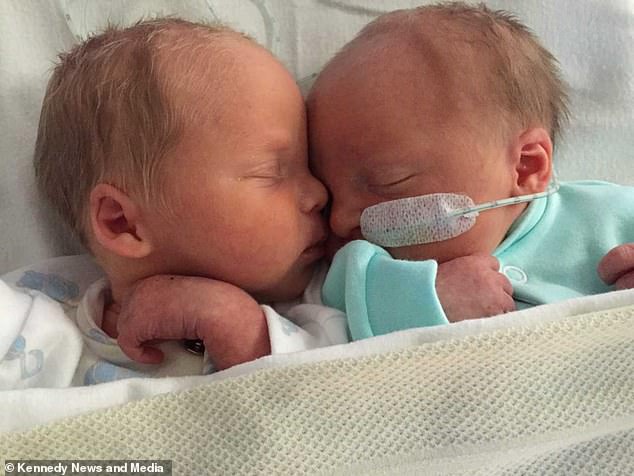 ‘The NHS, as much as I love them and think they’re amazing, it’s just a constant battle with them,’ said Mrs Johnston.

‘The waiting list is so long that it’s cutting out nine years of my child’s life. Children are children, and they learn so much even in a year.

One in every 400 children in the UK are thought to be born with cerebral palsy, meaning around 1,800 children a year have the condition.

It’s estimated that 764,000 children and adults in the US have one or more symptoms of the disorder.

‘In this short space of time, Matthew has realised that other children his age are running around and kicking footballs, and he doesn’t understand why he can’t.

‘I am determined that both of them will walk by the time they are five years old. That is my goal. I think they deserve that chance. Every child deserves that chance.’

But it is not certain whether Lucy will be eligible for the operation because her condition, so she will be reassessed when she turns three years old.

If doctors say the procedure could help her, too, the Johnstons will need to raise another £48,500 for her treatment.

‘The day either of my children take their first steps it will be probably the best day of my life, and that even comes after marrying my husband,’ Mrs Johnston said.

‘He’s in total agreement. To see them do that will be everything that we are about right now.

‘That’s what we’re trying to promote at the moment, that all children deserve to be able to be children. To cut that off by seven or eight years is sacrilege to me.’

Lucy suffers from stiffness and muscle spasms all over her body and her development is six months behind Matthew, who is already eight months behind other children their age. 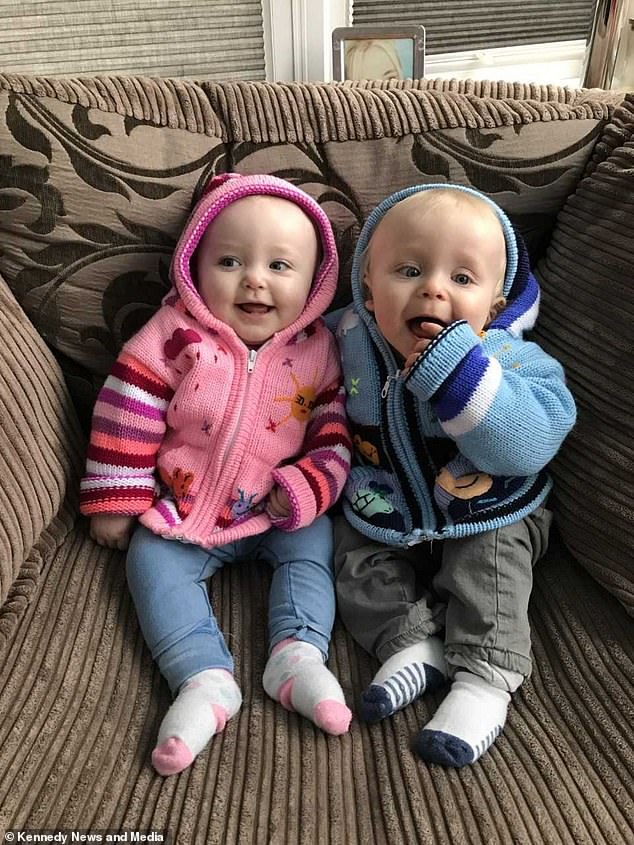 Mr and Mrs Johnston are trying to raise £48,500 so they can pay for surgery for their son, Matthew (right), who doctors believe would definitely benefit from it, and they may need to raise the same amount for Lucy if it is decided it would help her, too 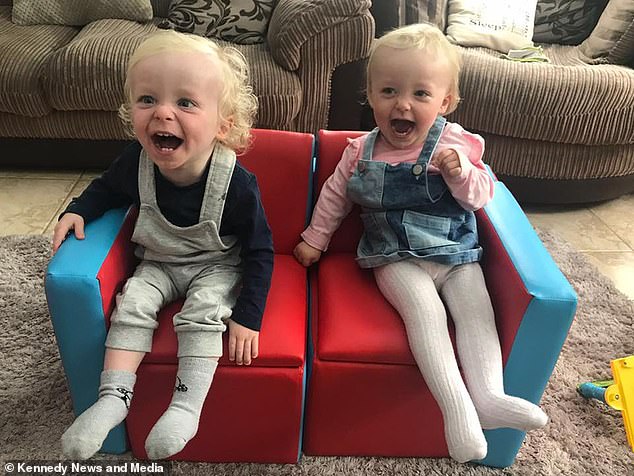 Matthew’s upper body is not affected by his cerebral palsy but his legs are too weak for him to stand on his own, whereas Lucy suffers from stiffness and muscle spasms across her whole body

The proposed selective dorsal rhizotomy (SDR) surgery would involve cutting nerve roots in the children’s spinal cords to loosen their muscles and enable them to move more freely.

Mrs Johnston, who is an accountant, said: ‘The operation petrifies me if I’m honest.

‘It’s an operation they do on the child’s back – the only way the consultant described it to me was like defusing a bomb.

‘He said if you cut the wrong lead the child is paralysed for life and there’s no reversing at all. It’s a big operation.’ 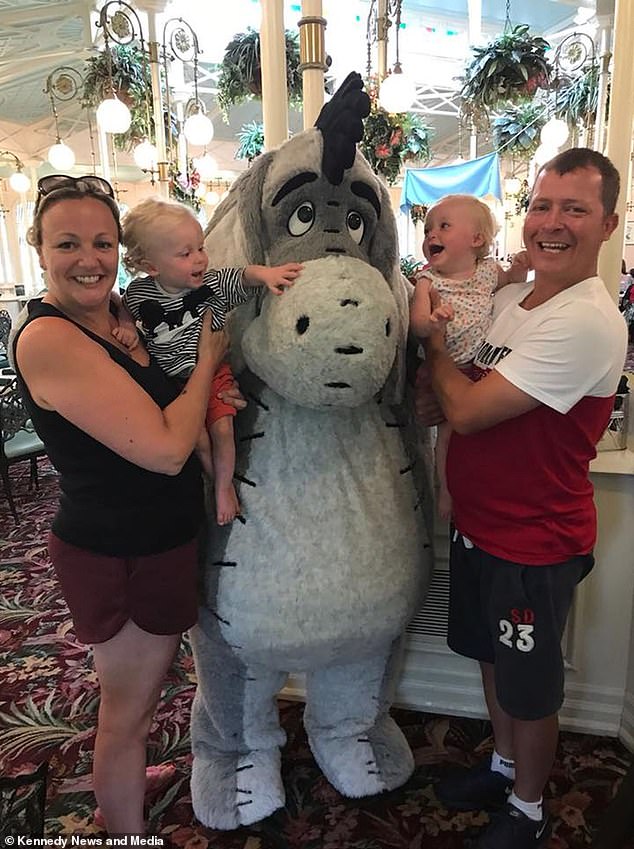 Mrs Johnston said it’s ‘very rare’ for both twins to have cerebral palsy, but admits the children ‘are not hard work’ and she and her husband will ‘do everything we can to get our children to where they should be’

Mrs Johnston said it’s ‘a very rare thing’ to have twins who both have cerebral palsy, and there are noticeable differences between the pair.

Lucy is so stiff she’s ‘like a pencil’ and cannot talk, but is smiley and laid-back, her mother says.

Whereas Matthew is the vocal one who ‘does the babbling for both of them’ and goes ‘head first into everything’.

‘They are both amazing children,’ Mrs Johnston said. ‘They are not hard work – everyone says to me they must be hard work. They’re not, they’re my children.

‘We will do everything we can to get our children to where they should be.’

Lucy has to be strapped into a chair to stop her falling over but it can restrict her so much she cannot play with her brother, Mrs Johnston said.

This is frustrating for the tot because ‘there’s nothing wrong with her intelligence-wise’, she said. 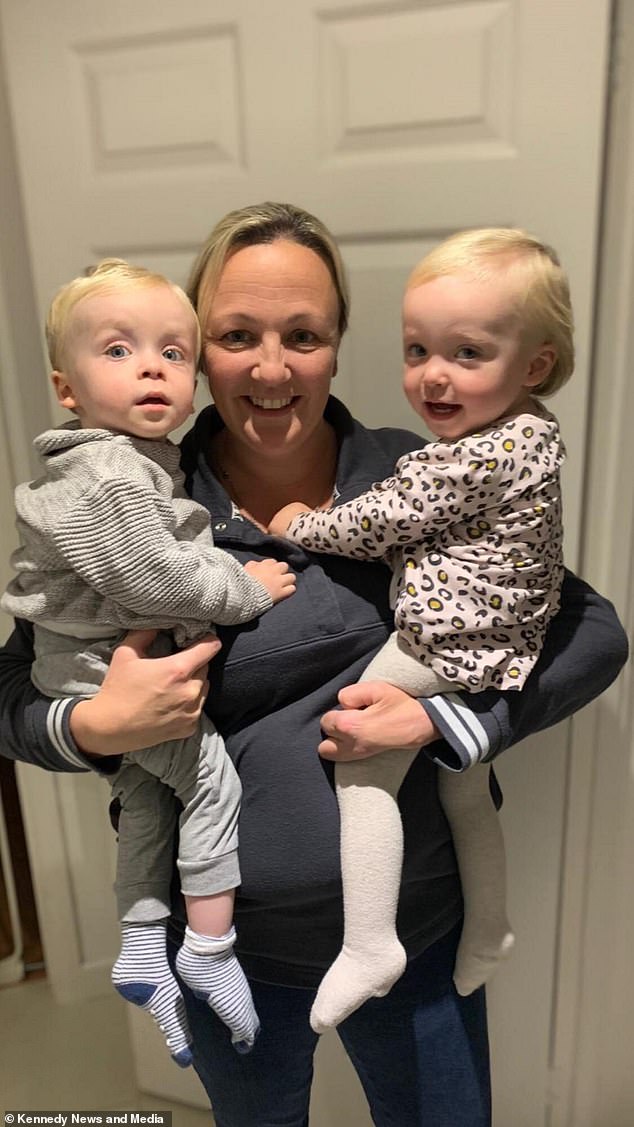 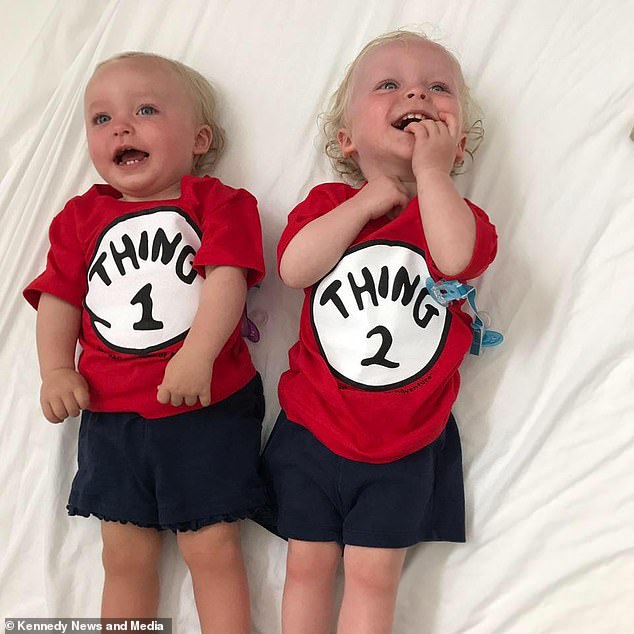 Mrs Johnston said Lucy (left), who cannot talk and is six months behind her brother in terms of development, is the ‘cautious’ one of the pair, while Matthew (right) ‘goes head first into everything’

But despite baby Lucy not being able to talk yet and struggling to move freely, Mrs Johnston claims the twins are already a team.

She said: ‘They’re the kindest, most loving children ever. They both have the most infectious laugh you could ever imagine.

‘Lucy’s our little stunner and ray of sunshine that people always wave at and makes people’s days.

‘Matthew will go head first into everything whereas Lucy is the one that will grab hold of him and pull him back.

‘She’s the cautious one and he’s the not so cautious one. They’re very different in personalities, very similar in looks.

‘No matter what people give or say, we’re just so grateful that they’re giving us this money.

‘It’s a big operation and I think it will one day be bigger in the UK, but unfortunately for our children it just hasn’t come around quick enough.’

You can donate to Lucy and Matthew’s cause on their parents’ JustGiving page here.