Mother of Corinna Slusser shares her heartache at Christmas

The devastated mother of missing Pennsylvania girl Corinna Slusser has spoken of her heartache at spending a second Christmas without her daughter.

Speaking exclusively to DailyMail.com, Sabina Tuorto revealed that she will not be marking the holidays this year as she cannot bear to celebrate while her daughter is still missing.

‘Corinna is all I think about,’ she said. ‘I can never feel happy. It takes every bit of my energy just to get up every day.’

Corinna Slusser, who would now be 20, has been reported missing since September 2017 when she vanished in New York City. She is believed to be a victim of sex trafficking 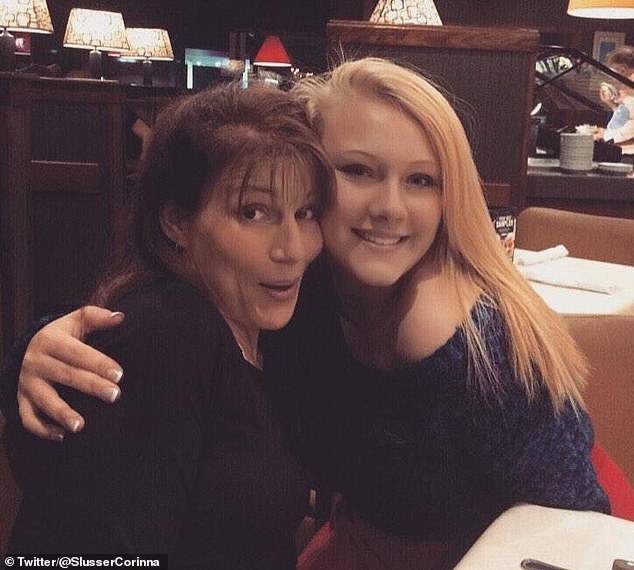 Corinna is pictured with her mother in February 2015. Sabina Tuorto revealed that she will not be celebrating Christmas this year as she cannot bear to do so while her daughter is missing

Sabina, who works as a nurse, said that she had chosen to spend Thanksgiving alone and that she will be working over Christmas Day. ‘It just doesn’t feel right to celebrate when Corinna’s not here,’ she said.

Former cheerleader Corinna was just 19 when she vanished from New York in September 2017 after being lured to the city to become a prostitute.

Investigators believe that she is the victim of sex trafficking and have since arrested a 23-year-old man in connection with the offence.

Speaking from her home in Bloomsburg, Pennsylvania, Sabina described Corinna as a happy child growing up and said she had been close to her daughter until just shortly before her disappearance. 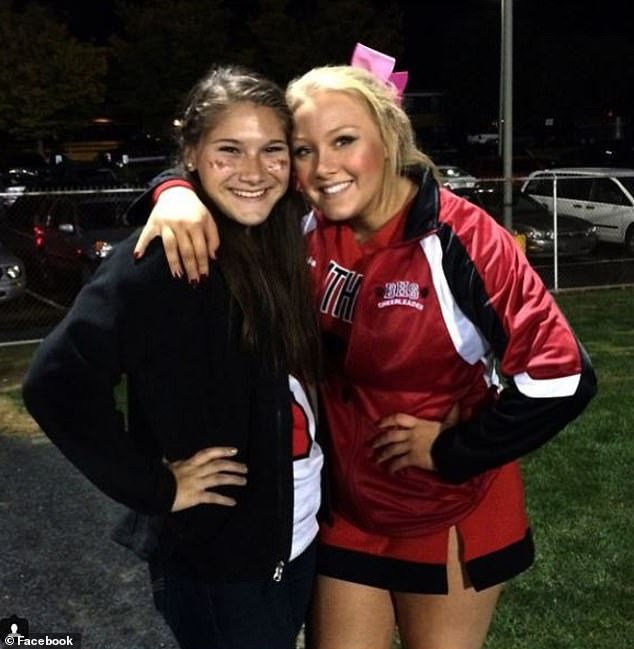 Sabina told DailyMail.com that Corinna, who would now be 20, was a happy child, and in her teenage years she was a cheerleader, ran track, loved makeup and had lots of friends 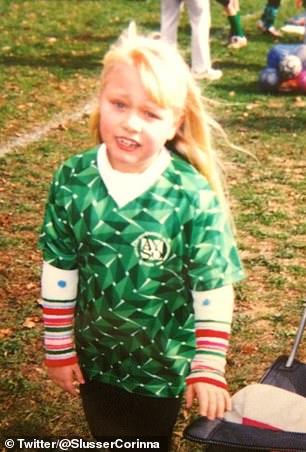 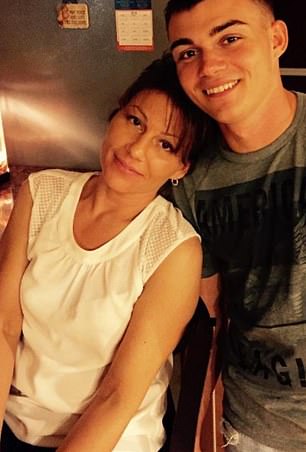 Corinna Slusser as a young child (left) and her mother Sabina and brother Justin (right), who is now a married father-of-one serving in the marines 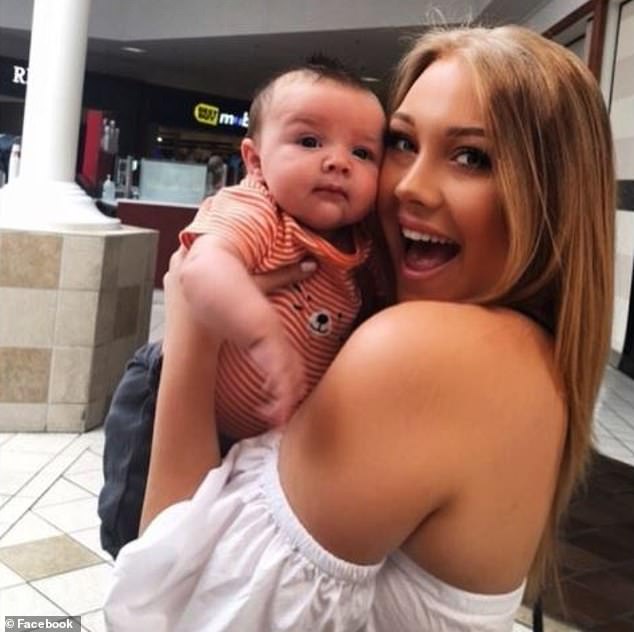 Corinna had hoped to make a career in makeup, but she started to grow distant from her family in the year before her disappearance and in August 2017 she decided to move to New York

Mother-of-two Sabina described how she raised Corinna and her brother Justin, who is now a married father serving in the marines, by herself but she made sure they never wanted for anything.

She said: ‘I was a single mother but my kids were happy. Corinna was a cheerleader, she ran track. She had lots of friends and was always doing their hair and makeup. Even if she wasn’t going out herself, she’d help them get ready.’

Sabina said that Corinna, who would now be 20, had hoped to make a career in makeup, but that she started to grow distant from her family in the year before her disappearance.

She says she now realizes that Corinna was speaking to ‘bad people’ on social media, who she believes later lured her to New York.

‘Everything went downhill so quickly,’ she said. ‘Corinna made enemies. She stopped speaking to her friends. They would see pictures of her on Snapchat smoking and with guns. 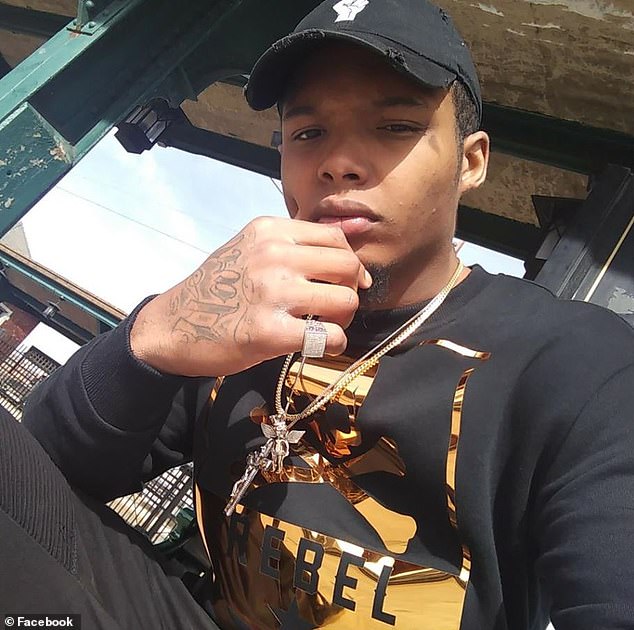 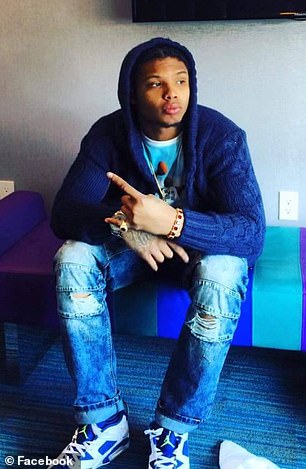 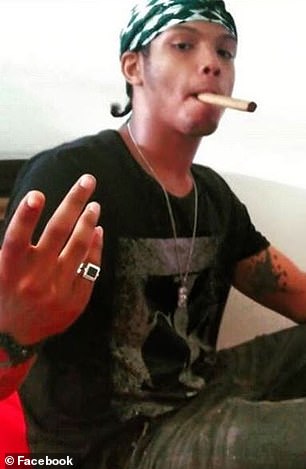 According to the complaint against Woney, he had been using Corinna and the second victim in online advertisements promoting prostitution. If convicted, he could face life in prison

‘She got in trouble for underage drinking, and we started fighting. Next thing, she’s moving to New York. I couldn’t stop her, she was an adult.

‘She didn’t like living in a small town. I guess she was running away from that life. I never would have suspected prostitution though, it just didn’t cross my mind back then.’

Sabina now believes that Corinna had initially been working as an escort, as she had been posting on social media about going on dates with men for money.

On September 8 2017, just days before she vanished, Corinna posted photos on Twitter of a one-bedroom, one-bath apartment on Grand Concourse in the Jerome Park section of the Bronx with a monthly rent of $750. 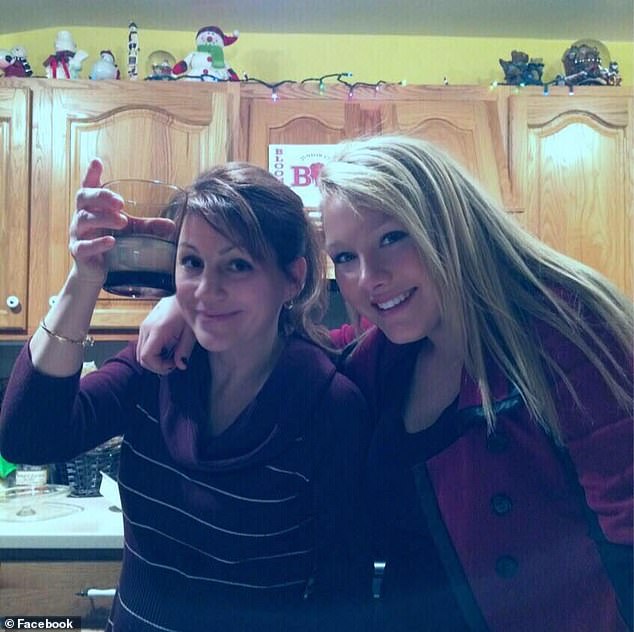 Corinna and her mother during Christmas 2014. Sabina refuses to give up hope that her daughter will be found, but said that she is struggling to cope with not knowing where she is 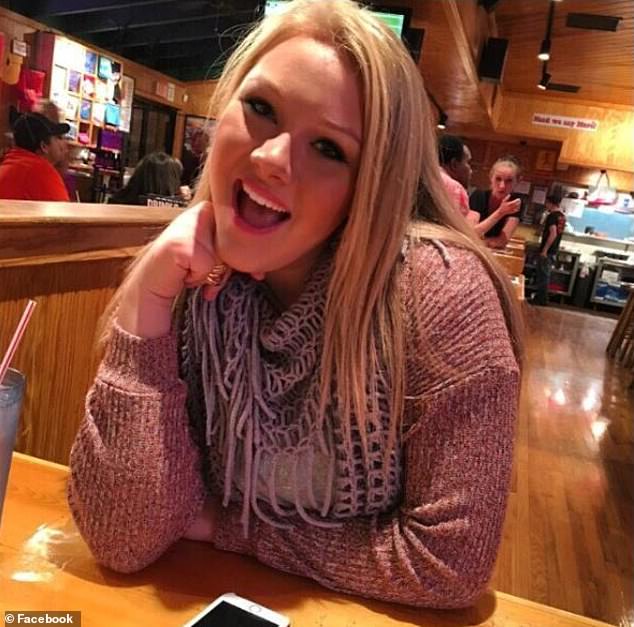 Sabina, who described having a close relationship with Corinna while she was growing up, said that she is convinced that her daughter is now being held against her will 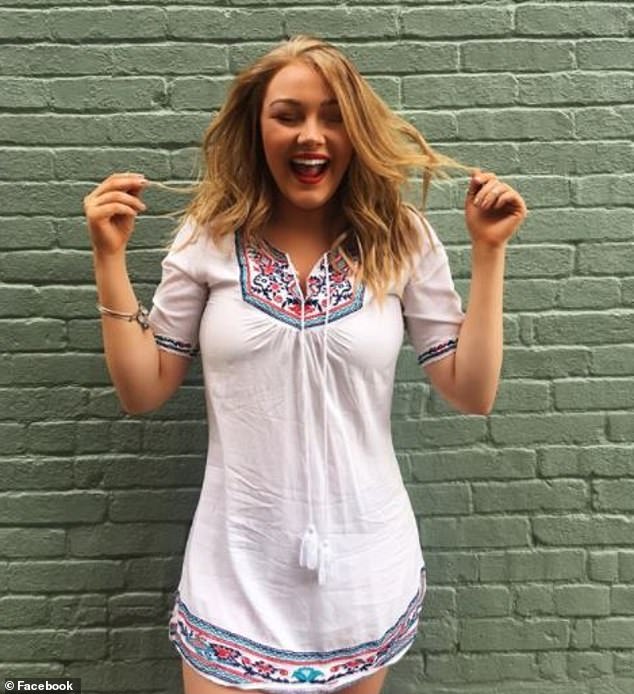 Corinna was frustrated by small town life as she grew older, but Sabina said that she never dreamed that her daughter would end up working in prostitution

She tweeted: ‘My first apartment all to myself in NYC!!! Never been more happier in my life. Forver [sic] dream accomplished.’

‘I don’t know where she would have got the money to pay for that,’ Sabina said. ‘She didn’t have a job. But she must have been earning it somehow.’

Investigators now believe that during this time she had been staying at a seedy motel in the Bronx that is known for sex trafficking.

Just days later, Sabina spoke to her daughter about returning home for her grandfather’s funeral in Florida.

WARNING SIGNS A PERSON IS BEING TRAFFICKED

‘She told me it was “ghetto” where she was and that she wanted to come home,’ said Sabina.

But Corinna said she had no license or social security card and she would be unable to board a plane without an ID. So she agreed with Sabina that she would come home after the funeral.

But when Sabina arrived back in Pennsylvania she was unable to contact her daughter, and on September 17 she reported Corinna missing.

The last confirmed sighting of the teenager was in the early morning hours of September 20 at the Haven Motel on Woodhaven Boulevard in the Rego Park section of Queens.

Corinna’s last Instagram post, dated September 10, was a photo tagged in the Bronx. It shows a woman smoking what appears to be marijuana with the caption: ‘cyphin mid day mid road is always good for the soul.’

‘Cyphin’ is New York City slang for passing a marijuana blunt around a circle.

Sabina is now convinced that her daughter is being held against her will.

‘I know if she was capable she would have called me,’ she said. ‘She’s being controlled. I don’t know what they’ve done to her, whether she’s on drugs or mentally unstable or whatever. But I know she’s not herself.’

Sabina added that she can’t help but feel disheartened at the sheer number of missing girls in New York and across the country. ‘She’s just one more drugged up lost soul,’ she said.

‘She’s a clever girl, but she’s from a small town. She doesn’t have the street knowledge to survive out there.’

The FBI made a break in the case last month when they arrested 23-year-old Ishi Woney for trafficking Corinna and a second woman named in court documents as Victim 1. If found guilty Woney could face life in prison. 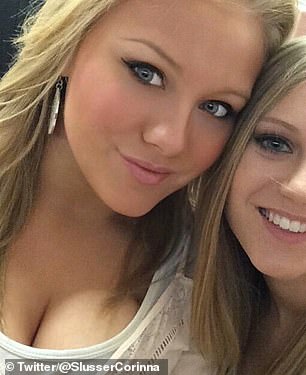 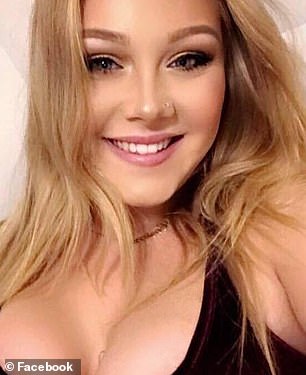 Corinna, who is pictured here in the year before her disappearance, is described as 5-foot-6, weighing 140lbs, with blonde hair and blue eyes, although her looks may have been altered 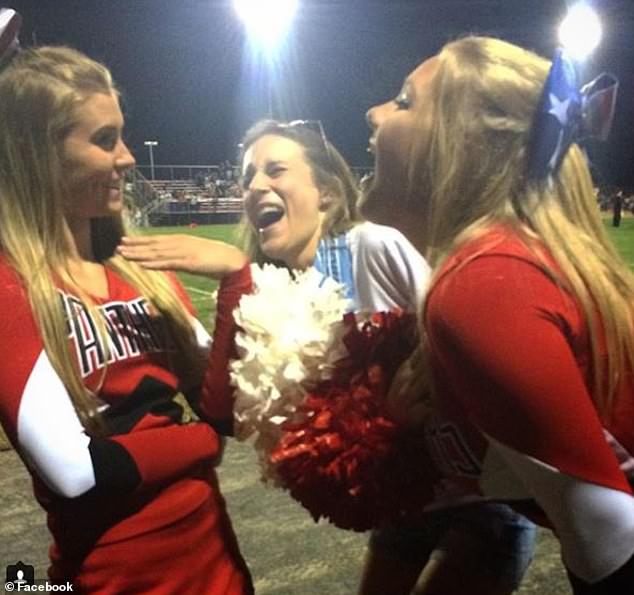 Sabina, who works as a nurse, raised her two children as a single mother, but she said that they were both happy and never wanted for anything (Corinna, right, is pictured as a cheerleader) 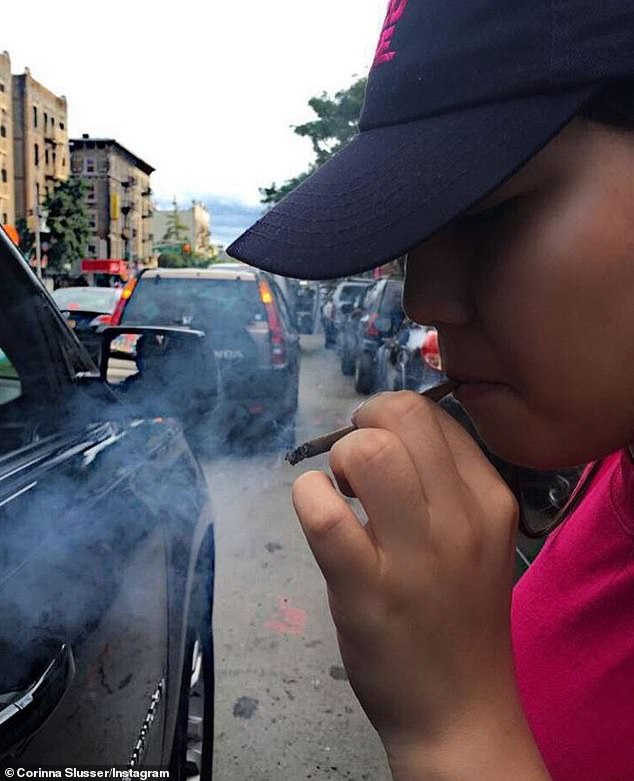 Corinna’s last Instagram post, dated September 10, was a photo tagged in the Bronx. It shows a woman smoking what appears to be marijuana with the caption: ‘cyphin mid day mid road is always good for the soul’

Part of the advertisement read: ‘always ready for fun! Please be RESPECTFUL & Discreet the TOTAL package SKILLS That will make you melt.’

The complaint alleges that Woney and Corinna had exchanged more than 800 text messages over the course of ten days in September around the time she was reported missing. It states that they then had a falling out because the second female victim was jealous of their relationship.

Last month, NYPD undercover officers conducted sting using a law enforcement database to track down an ad for sex services that featured the other female victim.

According to court documents, an undercover officer met the female victim at a hotel in the Bronx and agreed to pay her $200 for an hour of sex services. As soon as the agreement was made, officers swooped in.

The woman was arrested and in a police interview she finally cracked, admitting that Woney was her ‘pimp’ and that she gave him all of the money from her sexual encounters.

‘Woney engaged in a vile form of exploitation, using force and other coercion to compel young women to engage in paid sex for his enrichment,’ US Attorney Geoffrey S. Berman said in a release announcing the charges.

Sabina now wants other parents to be aware of the signs that their children may be falling victim to sex trafficking. 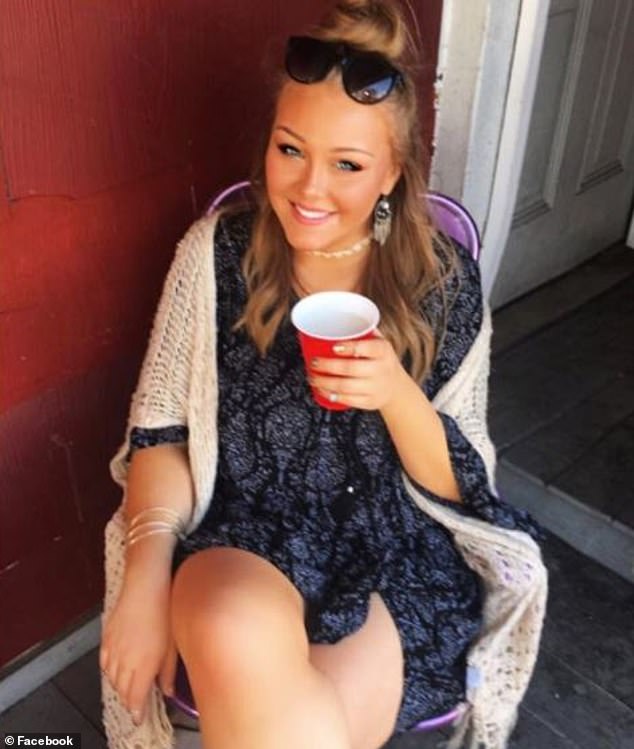 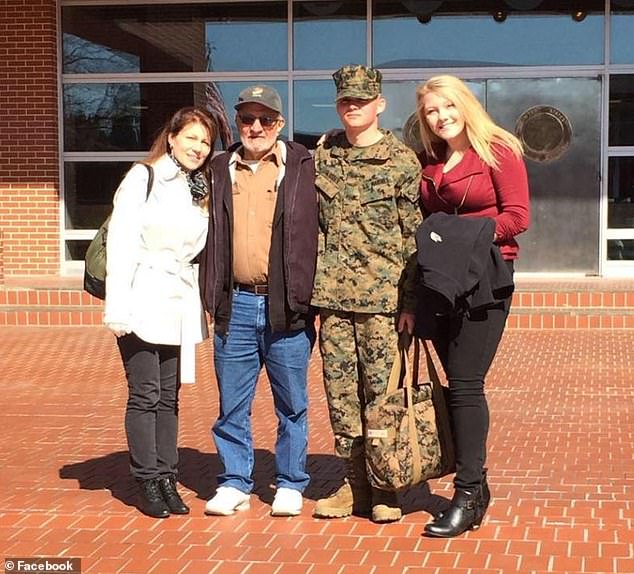 Sabina believes that if someone like Corinna could fall victim to sex trafficking then it could happen to anyone, but she had no idea what was happening to her daughter at the time

‘No one should have to go through what I have,’ she said. ‘Now I look back at it I can see that she was displaying all the signs, but at the time I had no idea what was happening.’

She refuses to give up hope that Corinna will be found, but she said that she doesn’t know how much longer she can cope with not knowing what has happened to her daughter.

‘I can’t go on for ten years like this,’ she said. ‘The not knowing is just unbearable. I don’t know if she is alive, but I can only hope that she is.

‘Somebody out there must know something.’

Corinna is described as 5-foot-6, weighing 140lbs, with long blonde hair and blue eyes, although her appearance may have been altered. She has a large black tattoo of a flower in the middle of her chest.

Anyone with information related to Corinna Slusser’s whereabouts is urged to contact the FBI at 1-800-CALL-FBI or online at tips.fbi.gov, or the NYPD at 800-577-TIPS.