Mother-of-four, 26, who crashed her Mercedes is cleared of drink-driving

A mother-of-four who crashed a Mercedes and later tested almost four times over the drink-drive limit celebrated outside court as she was cleared of any wrongdoing by claiming she had ‘necked’ pints of nearly-neat vodka to ‘calm herself down’ immediately afterwards.

Manchester-based accountant Kelsey Ridings slammed her sports car which was carrying her four children into a black Peugeot 308 on May 6 this year, offered driver Carl Kidd £1,000 while ‘unsteady on her feet’ then disappeared before police arrived, a court heard.

Officers traced the 26-year-old to her home in Mottram near Tameside around an hour later, where an initial breath test showed she had 124mg of alcohol in 100ml of breath – the legal limit being 35mg. A second test revealed that she had 82mg of alcohol in her system.

But JPs cleared Ridings of drink-driving at Tameside Magistrates Court after she and her best friend Paige Azad, 24, insisted that the mother-of-four had ‘necked’ two large glasses of alcohol in just 15 minutes at Miss Azad’s home to settle her nerves after the crash.

Giving evidence to the court, Miss Azad claimed that Ridings had consumed ‘a lot of vodka and a bit of coke’ after the crash and that Ridings had been given a lift home – adding she would never have let the accountant drive as she was godmother to her children.

The chairman of the bench said: ‘Mr Kidd was clear and credible. Miss Ridings was often confused, emotional at times and misleading. The other lady, Paige was totally incredible. However, the prosecution have not proved beyond reasonable doubt this case.

‘There is insufficient evidence to prove you were over the limit at the time of the incident or at the time of consuming. We therefore find you not guilty.’

As Ridings and Miss Azad celebrated outside, prosecutors questioned the verdict but Mrs Furness insisted: ‘We believe the Crown’s case has not been proved beyond all reasonable doubt. We are not prepared to go into it anymore.’ 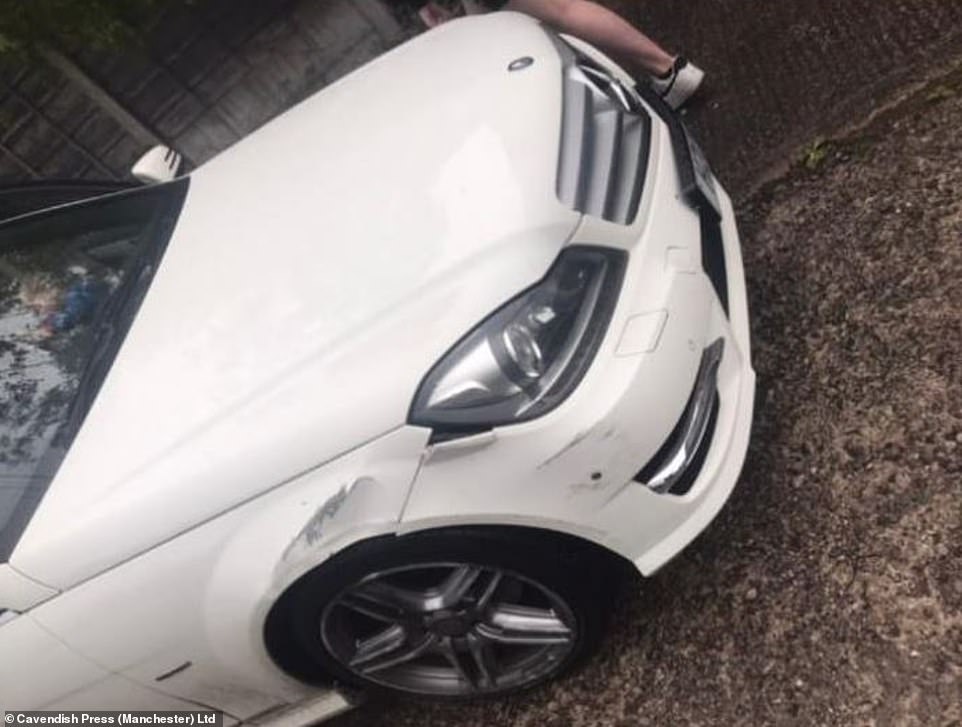 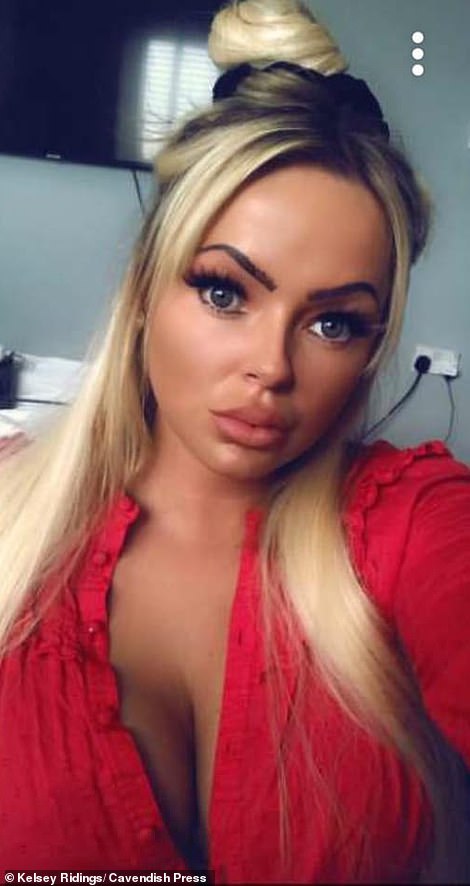 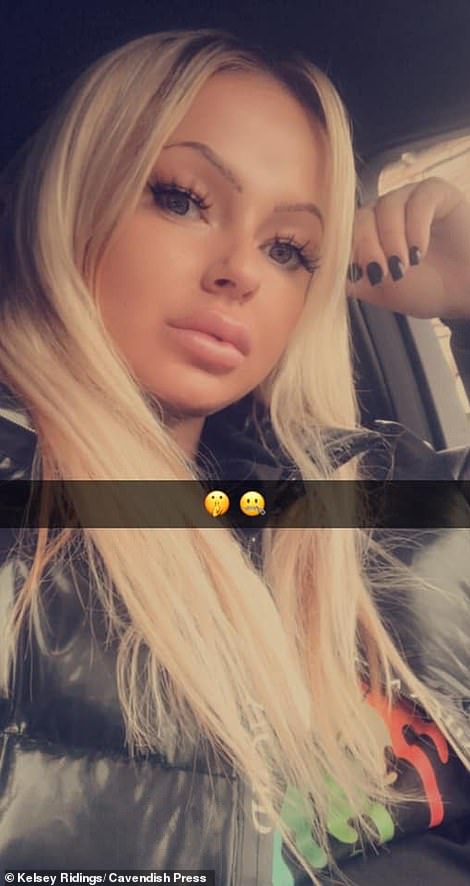 Kelsey Ridings, 26, slammed her sports car carrying her four children into a black Peugeot 308, then offered the other driver £1,000 while ‘unsteady on her feet’ and left before police arrived, a court heard 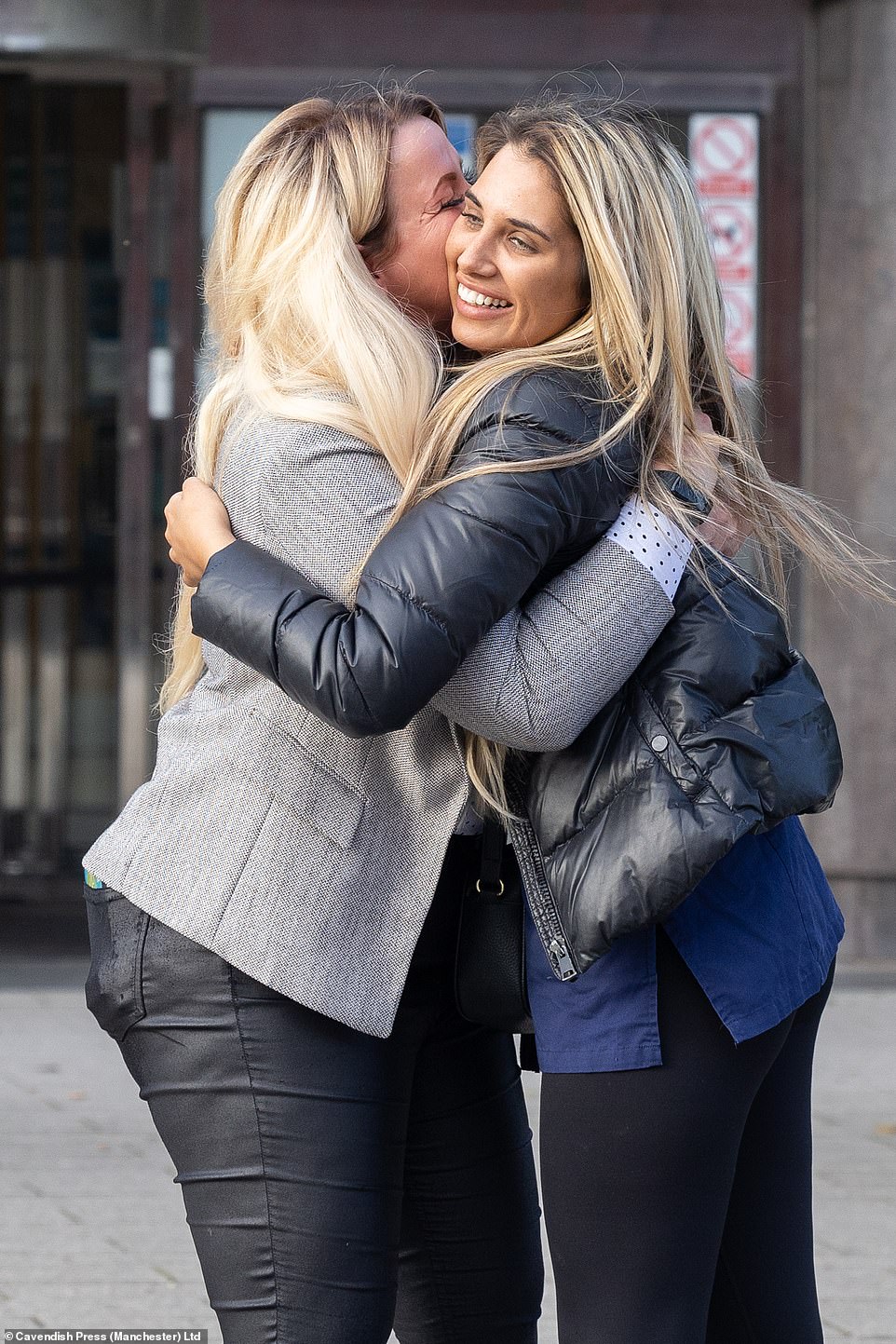 The 5pm incident occurred after Ridings’ crashed her car as she was returning home from a shop she was thinking of renting as a beauty salon.

The other driver, Carl Kidd, was taking his heavily pregnant partner to see his parents. He told the hearing: ‘She was well over on my side of the road and she was coming at speed. I steered away to avoid a head on collision but she caught the back end of my car. I made sure my partner was okay then went over to confronted her the other driver. She then opened the door and there were three kids in the back and a young girl in the passenger seat, all children.

‘She got out and abruptly walked over to my car. I said: ‘look what you have done?’ and asked for her insurance details but she offered me £1,000 to not go through the insurance.

‘I said there wasn’t a chance of that because the chassis was bent over where she had hit me and we went over it back and forth. I asked her again for her insurance details and eventually she gave them, got into her car and sped off. I then rang the police and got nothing else from other than her name, insurance company and I had taken a picture of her registration.

The court heard police arrived at Ridings’ home at 6.11pm where she was said to have an ‘elevating demeanour.’ After blowing almost four times the limit she took a second test which showed she had 82mg in breath. 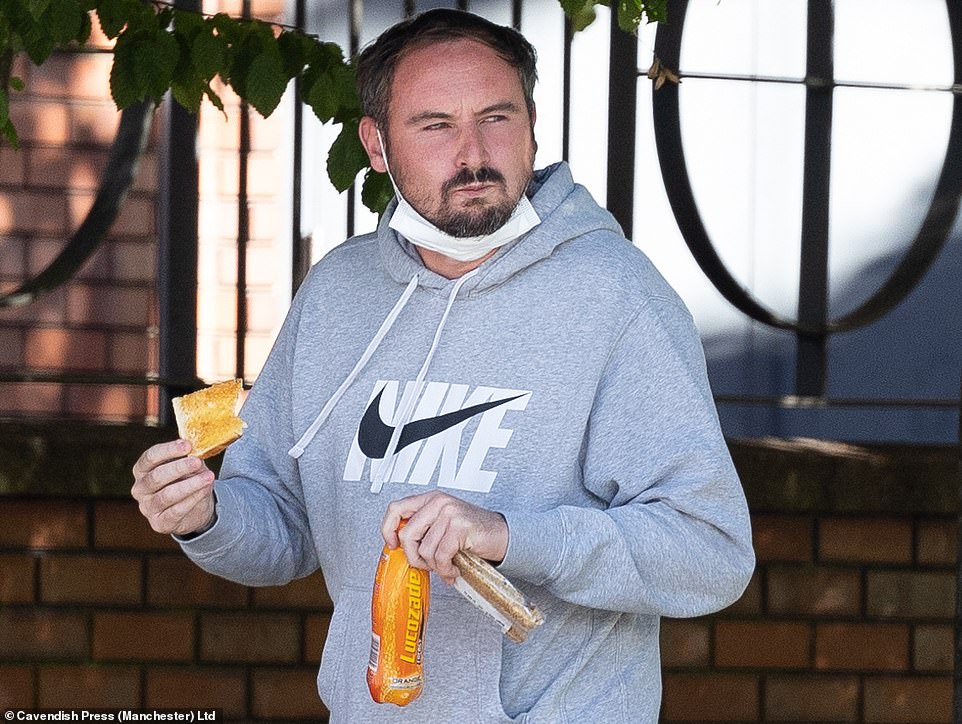 The other driver, Carl Kidd, was taking his heavily pregnant partner to see his parents 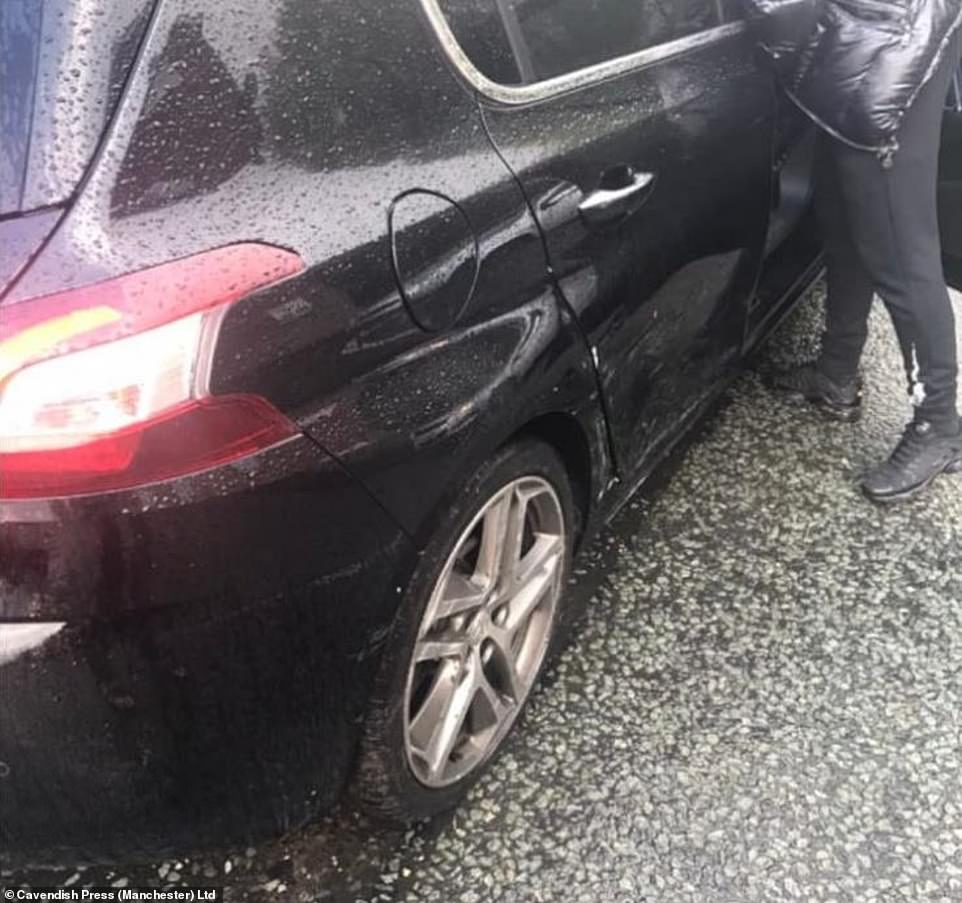 Pictured is Carl Kidd’s damaged Peugeot after the crash

Miss Azad, a care assistant, told JPs: ‘When I saw her she was distraught and crying her eyes out – but was not under the influence of alcohol, no way. She said: ‘can you make me a drink’ and I saw a litre of vodka. It’s all my fault as I might as well have given her the whole litre of vodka. I am not going to lie. She just necked it.

‘I just wanted to calm her nerves and to calm her down whilst she was arranging a lift on her phone. I saw the vodka used a tall pint glass and put in a lot of vodka.

‘I got her another drink and she necked that one too. I would never let her drink drive home. I am a godmum to her family. She wouldn’t have drink driven. Why would she put her seven-month old baby at risk and her other boys?’

Ridings told the hearing: ‘I was coming round a bend and was going down the hill but as I accelerated the car skidded and I have clipped the other car. I did say: ‘can we not go with insurance’ as I had £1,000 in savings which I could use. I said my premiums were really high as it is due to my vehicle being a sports car and because of my age.

‘But he said it would be more than that and something needed to happen that day. I felt uncomfortable. It was only minor damage – just a scrape. There was more damage to my car. I had not had any alcohol by that stage. I drove off because other cars were beeping and he was aggressive and the kids were screaming. We were not getting anywhere. I went to Paige’s house and there I was trying to calm down and I asked her to get me a drink. I was wanting to get picked up, I was shook up and had had a drink. I had two big drinks before I left her house and I got a lift home. He had been aggressive with me when he didn’t really have a right to.

‘There was no need to be aggressive to a girl with kids in the car. He was demanding money, his tone of voice was not good and he was pacing around shouting at me. I got into the car and drove off to Paige’s. Everything was happening too fast and the kids were hysterical. At Paige’s I was panicking and asked her to get me a strong drink. 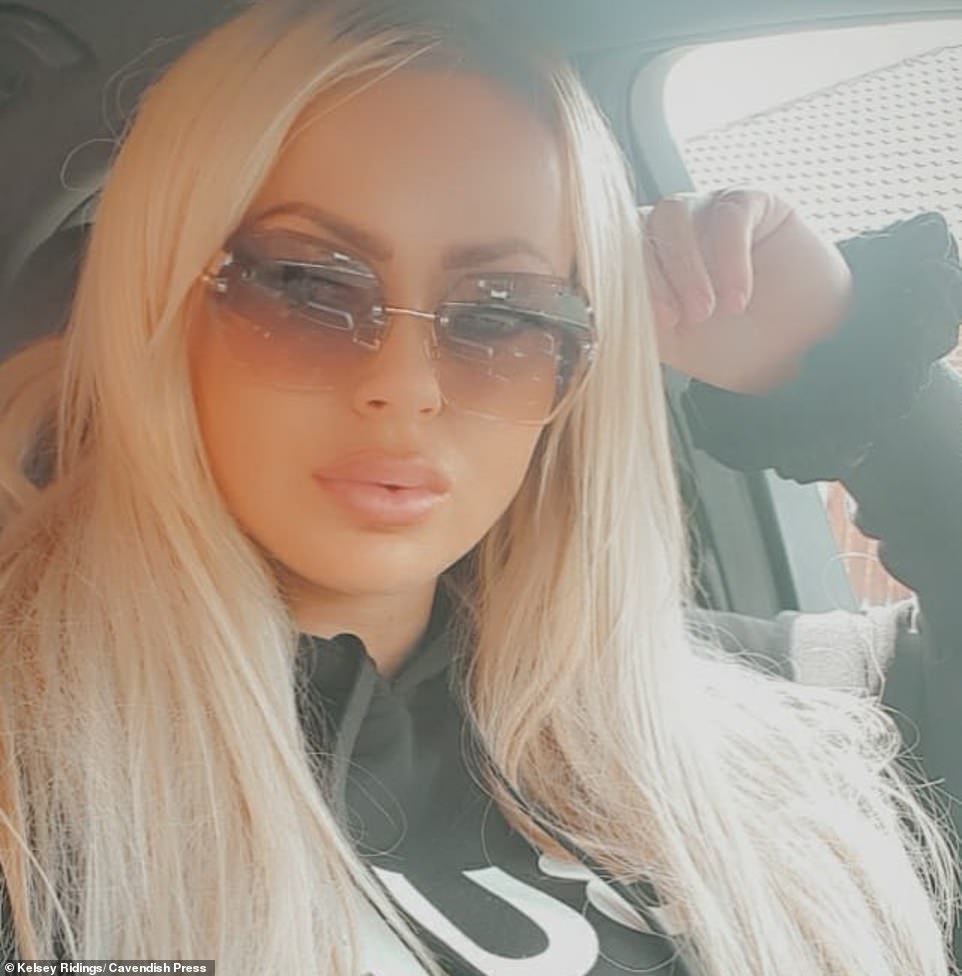 ‘I just needed to calm my nerves and I stood outside her house having a glass a of vodka which was more or less neat and I then necked it then had another one whilst I was getting the kids out of my car and into my friends van.’

Breaking down in tears she added: ‘I just feel like a bad mum drinking. I was there 15-20 minutes and it was long enough to have two drinks. I just panicked. They were incredibly strong drinks. I had not had a drink before it.’

Prosecutor Nick Smart told the hearing: ‘Mr Kidd gave a breathtakingly honest account about the incident. He was always going to be angry and upset. This lady was said to be distraught whilst her animated friend gave her a drink. It does not pan out.

‘The situation was fraught with emotion, one party had children in the car the other party had a heavily pregnant woman. It is very easy to say I would not drive because it would put my children’s safety at risk but a lot of people do drink and drive. It is quite common regrettably.

‘People who have had a drink make ill-founded decisions and that is what has happened in this case.’

But defence lawyer Dave Holland said: ‘The two of them had a conversation lasting 5-10 minutes and whilst Mr Kidd had some suspicions she was drunk, he could not be sure and he could not smell alcohol.

‘He accepted he became aggressive and she felt threatened. She has never been in trouble before.’