Mother-of-four, 27, dies of cervical cancer after check-ups were halted by Covid pandemic

Mother-of-four, 27, dies of cervical cancer after check-ups were halted by Covid pandemic and she was misdiagnosed with an early menopause

A mother of four died of cervical cancer after check-ups were halted by the Covid pandemic and doctors brushed off her symptoms as early menopause.

Lizzy Evans, 27, from Bagillt, Wales, was pregnant with her fourth when she was diagnosed with cervical cancer.

She began her grueling treatment soon after giving birth – which was induced eight weeks early – and was given the all clear.

But less than a year later, Mrs Evans began experiencing severe pain in her back, shoulder, ribs and neck.

Her GP said this was due to her treatment bringing on early menopause and she was ‘sent home with pain relief’.

But when the pain got worse, further tests revealed the cancer had returned.

It had spread to her lungs, brain and spine and was terminal. She passed away on March 31 leaving behind her children aged nine, eight, two and one.

Mrs Evans was told she would be monitored regularly but the pandemic meant this ‘didn’t happen’.

Lizzy Evans, 27, from Bagillt, Wales, was pregnant with her fourth when she was diagnosed with cervical cancer

The first country-wide coronavirus lockdown – which halted many services for three months or more – may have reduced the number of cancer referrals in the midst of the first wave of the virus.

Damning figures from last year suggested that up to 35,000 extra deaths in 2021 may be caused by cancer as a result of the pandemic.

Prior to her passing away, Mrs Evans spoke in length to North Wales Live about her illness in a bid to raise awareness.

She told how her extreme pain was brushed off by her GP and paramedics as muscular skeletal pain.

When the pain spread to her stomach, doctors feared she had a twisted ovary.

But she was sent home again when tests revealed that was not the case.

One morning, pain in her chest left her nearly unable to breathe and she was rushed to hospital with fears of a collapsed lung.

When an x-ray showed she had fluid on her lung – and further tests were carried out – Mrs Evans got the horrifying news that her cancer was back. 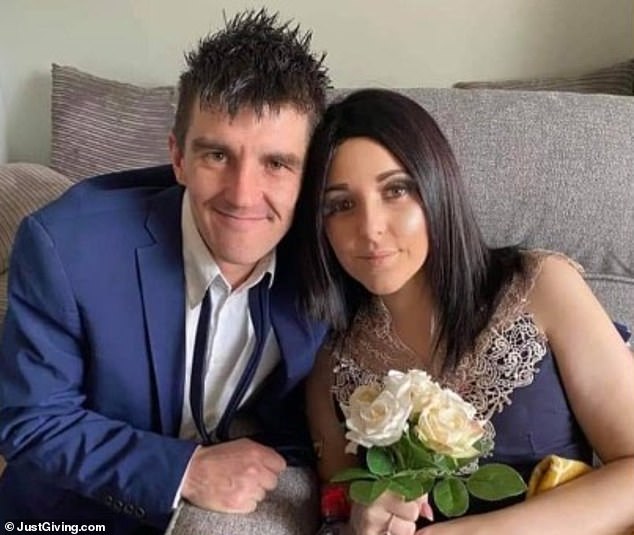 After her terminal diagnosis, she and her boyfriend Joshua Evans, 29, (pictured together) got married her mother’s house

Mrs Evans said: ‘To find out I had cancer in the first place was a massive shock and after I got the all clear, we thought we could move on with our lives and get back to normal, then this was just the worst.’

After her terminal diagnosis, she and her boyfriend Joshua Evans, 29, got married her mother’s house.

When she was told all options were exhausted – and she was deemed to ill for a clinical trial in Manchester – Mrs Evans began to plan her own funeral.

Her mother Chrissy Davies said her daughter was ‘such a kindhearted person, very loving and always helped others’.

Local fundraising group Belief organised a crowdfunder to ‘help make memories’ for Mrs Evans prior to her death.

After she passed away, the group revealed all funds will go to her ‘loving husband and children’.