A modern day witch has revealed how she ‘harnesses the power of sex’ to cast spells and uses ‘moon water’ to protect her children – as she dismisses the misconception that witches are haggard women with ‘green skin and pointy hats’.

Mother-of-four Daisy May Gray, 31, from Norfolk, became interested in Wicca after she began growing and drying her own herbs and joined Facebook communities for witchcraft which she said she found ‘fascinating’.

She now she collects water every full moon to make ‘moon water’ and keeps her children’s baby teeth as amulets for protection.

She also harnesses the power of sex to practise her magic and is exploring the link between ‘sexual energy and lunar cycles’.

Mother-of-four Daisy May Gray, 31, from Norfolk, became interested in Wicca after she began growing and drying her own herbs and joined Facebook communities for witchcraft 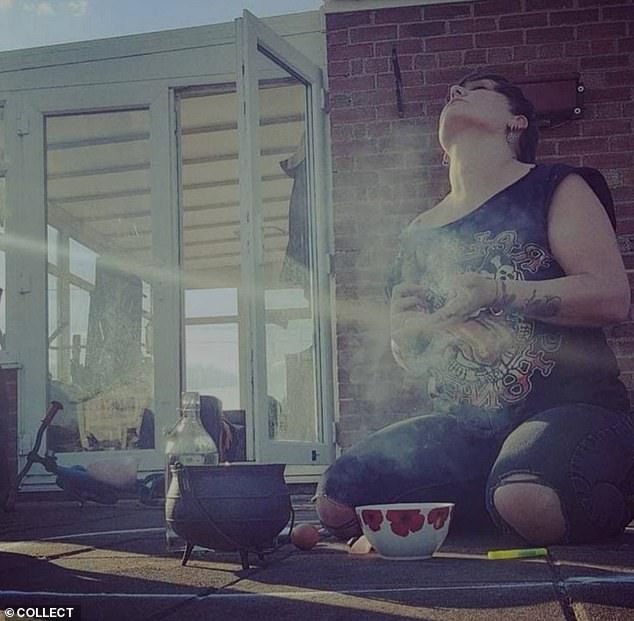 Daisy, 31, pictured practicing her spells, hits back at the misconception of witches as women sitting in ‘pointed hats’ with green skin and warts on their face

She said: ‘The path chose me to be honest. The idea of drying and using my own herbs really appealed to me.

‘There’s so much to learn and I was drawn to it because it’s fascinating – there are so many groups and forums online to talk about the craft.’

Contemporary witches often align themselves with an element, creating different branches of witchcraft. There are sea witches, hearth witches and even chaos witches.

Some may belong to a coven but many, like Daisy, who defines herself as a ‘hedge witch’, practise alone.

‘Hedge witches’ tend to find ‘magical intent’ in the routine of their day-to-day activities, and take part in a deep study of plants and the natural world.

Daisy said: ‘I’m a Taurus, which is an earth sign so that’s why I feel an affinity with hedge witchcraft and nature.’

She said part of what she loves most about Wicca is how ‘individual it is, because each witch makes up their own set of rules and rituals that fit around their daily life.

Daisy grows all of her own herbs and uses her home tended sage to ‘smudge’ her house in order to ‘cleanse the space of negative energy’.

But the mother-of-four is keen to dispell any myths about witchcraft, telling FEMAIL: ‘There are misconceptions in society that witches have green skin, warts and wear pointy hats or that we are involved in dark satanic magic but that isn’t the case. We work with what’s around us, the elements.’

Each month Daisy leaves a container of water outside during the full moon so it can be infused with natural power. She uses this throughout the month to make spells and adds it to her children’s bathwater. It is said to bring them protection and relaxation. 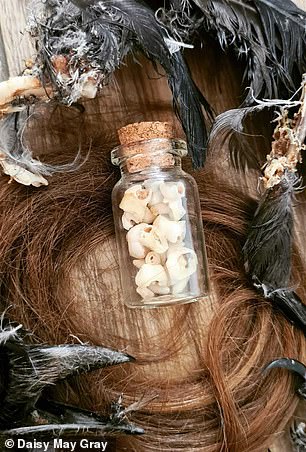 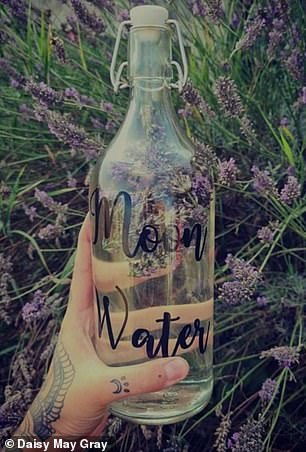 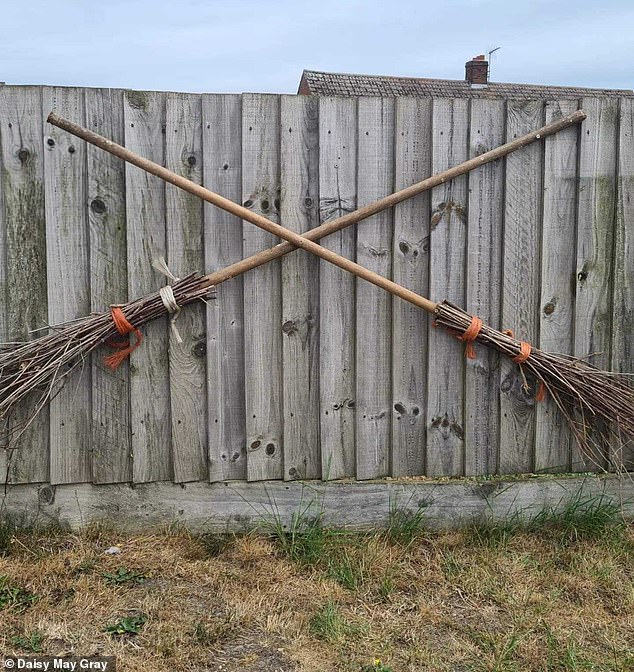 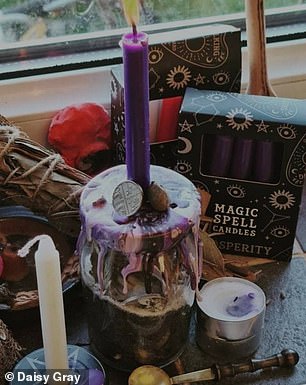 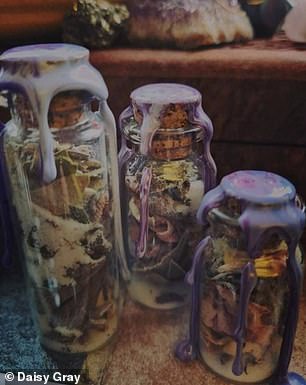 Daisy makes her own spell jars(left) and moon water for friends, which have cleansing and healing powers. Moon water (right) is bottled at the full moon

Other spell ingredients include the body parts of roadkill.

She said: ‘I have carcasses and bones that I use for spells such as a bat, rat, and crow that have been brought to me.

Daisy’s recipe for a spell jar for love

‘Crows feet are a talisman of good luck and protection. Bones can be used as elements during a spell to ground you to the earth and also elements for particular spells.’

She also uses ash from the burning of sage to create a ‘black salt’ to use in her spells.

She said: ‘Black salt is a witches bread and butter when it comes to spells.

‘When you cast a spell, pour a pinch of black salt in each corner of the room, before beginning the ritual, to ward off any negative entities.’

Daisy also keeps her children’s ‘teeth and hair’ in vials for ‘protection.’

The witch said she has been exploring the link between sexual energy, lunar cycles and feminine power, and in particular the power of orgasm.

‘As well as following lunar cycles and the changes in energy, orgasm is one of the most powerful forms of energy I’ve ever used.’

Daisy is currently exploring the power of orgasm both alone and with her partner to harness powerful sexual energy for spell work.

The energy can be used for manifestation or making spells stronger.

Wiccans believe that during an orgasm a person enters a ‘trance state’ and that state can be directed as a magical force.

They believe simple sex magic can be created by visualizing a goal whilst at the height of orgasm in order to ‘manifest’ it.

Wiccans also believe sex magic can also be used to clear the mind before spell work.

Meanwhile they say that women are at their most powerful at the end of their cycle – during their period.

As well as performing her own spells at home with her cauldron, Daisy creates ‘spell jars’ to make and give to friends.

The mother-of-four also sells the jars, which she says are a way to share her magic with others, online.

Spell jars can be created for all sorts of reasons, including creating confidence, protection, or even manifesting health and love.

However Daisy said she is aware that witchcraft has become commercialised in recent years.

She added: ‘It’s not so much things like herbs and tools but things like spiritual readings and tarot cards have definitely become more commercial.’