A mum was left hospitalised on a drip after she suffered a severe reaction to hair dye – which left her scalp covered in blisters and her eyes swollen shut.

Leonie Dee, 27, from Aberaeron, Wales, attempted to dye her hair in two different colours using Schwarzkopf Live in ‘Cosmic Blue’ and ‘Ultra Violet’, which cost her £4.79 each.

Leonie carried out a patch test with both colours before applying them to her hair last week to ensure she would not react to them.

But when the mother-of-four came to dye the top half of her hair with the dark blue dye, the reaction left her hospitalised for over 36 hours.

Leonie Dee, 27, from Aberaeron, Wales, left, had to be hospitalised for 36h after a home hair dye caused her scalp to swell (right)

Leonie, who works as a cleaner for her local GP surgery said: ‘It was really scary – at one point they were worried that the swelling might move to the front of my throat.

‘I even asked them at the hospital whether it shaving all my hair off would help. I was ready to do that if it would have made a difference.

‘But the dye had already absorbed into my scalp, so there was nothing to do but wait for the swelling and the blisters to go down.

‘I’m definitely never dyeing my hair again – I’m going to let it grow out and then just leave it.’ 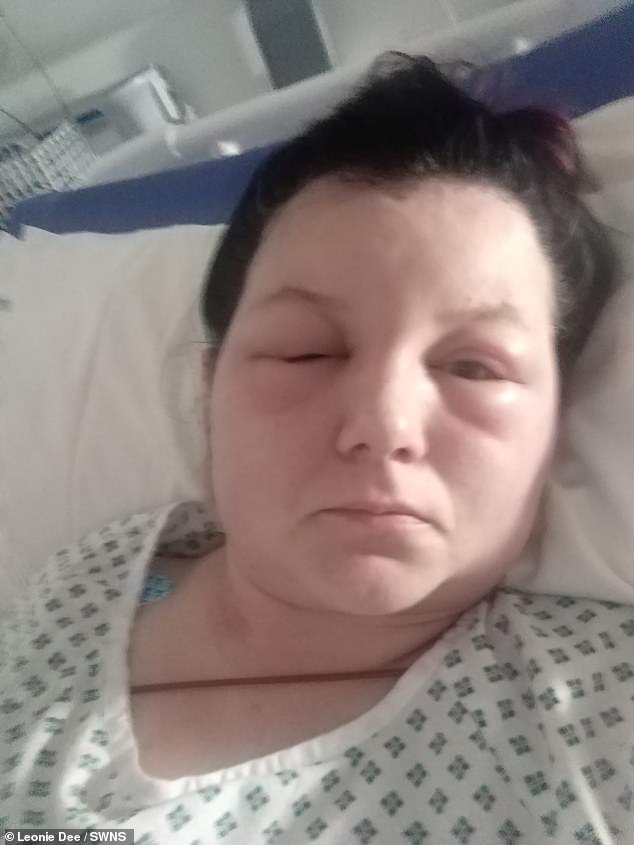 The mother-of-four in hospital a few hours after the reaction, her head still looking severely swollen 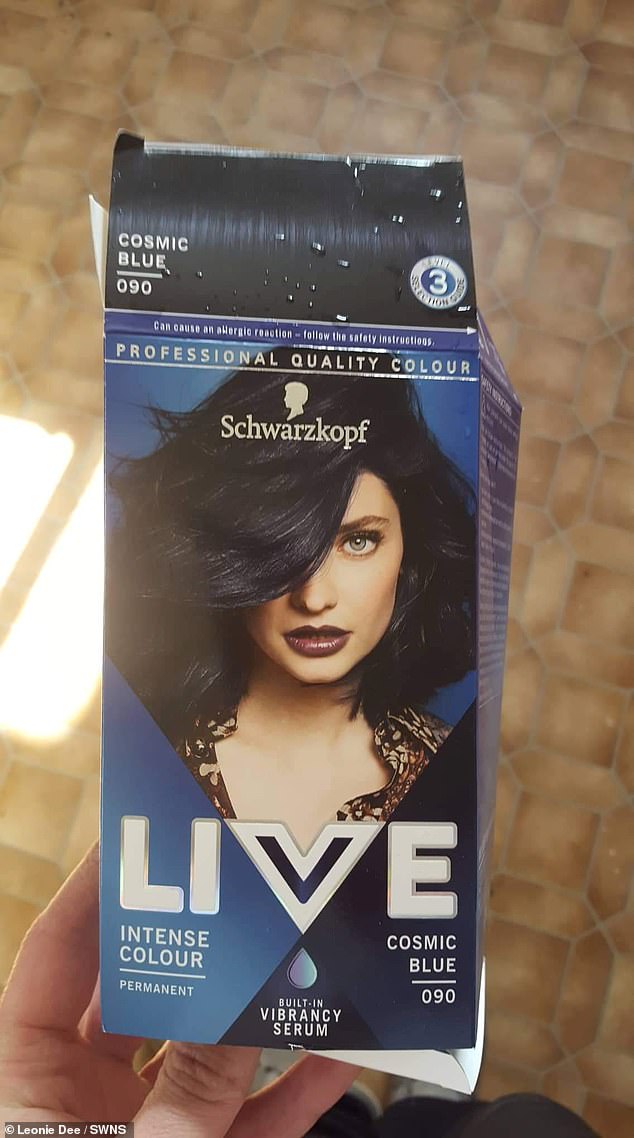 Leonie used Schwarzkopf Live in ‘Cosmic Blue’ and ‘Ultra Violet, pirced £4.79 each. She said she used to do it all the time as a teenager 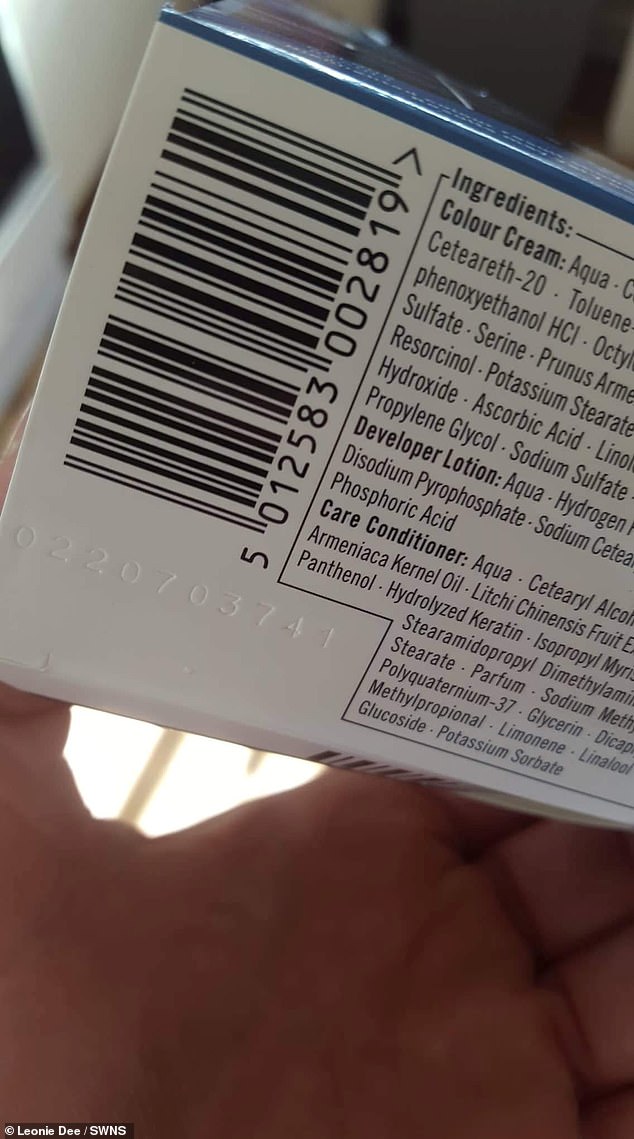 Leonie said she used to dye her hair regularly as a teenager – and would change the colour every time she began to see her roots grow through.

But after having kids – now aged 11, ten, three, and six months – she said she ‘couldn’t be bothered’ – and had not dyed her hair in seven years.

But Leonie added: ‘I’d got to the point where I just fancied a change.

‘Because it had been so many years since I last dyed it, I was really religious about reading the pamphlet and doing the patch test, because I wanted it to be perfect.”

Leonie bought the two different-coloured Schwarzkopf Live hair dyes from her local pharmacy, and set about doing the patch test for each one.

The swelling slowly went down (left and after a few hours, right) during Leonie’s hospital stay, but the experience was traumatising enough for Leonie to swear she wouldn’t dye her hair again

She said: ‘Nothing came up at all – not a mark. So I went ahead and dyed the bottom half of my hair purple, and that went fine.

‘Then I gave it a couple of days before doing the blue hair dye on the top half of my head at about 5.30pm on Thursday.

‘When I woke up the next morning, my ears and the side of my neck had started swelling a bit – but I was able to manage it okay with just taking some anti-allergy tablets I had at home.’

But when Leonie woke up on Saturday morning, she was shocked at how the reaction had developed. 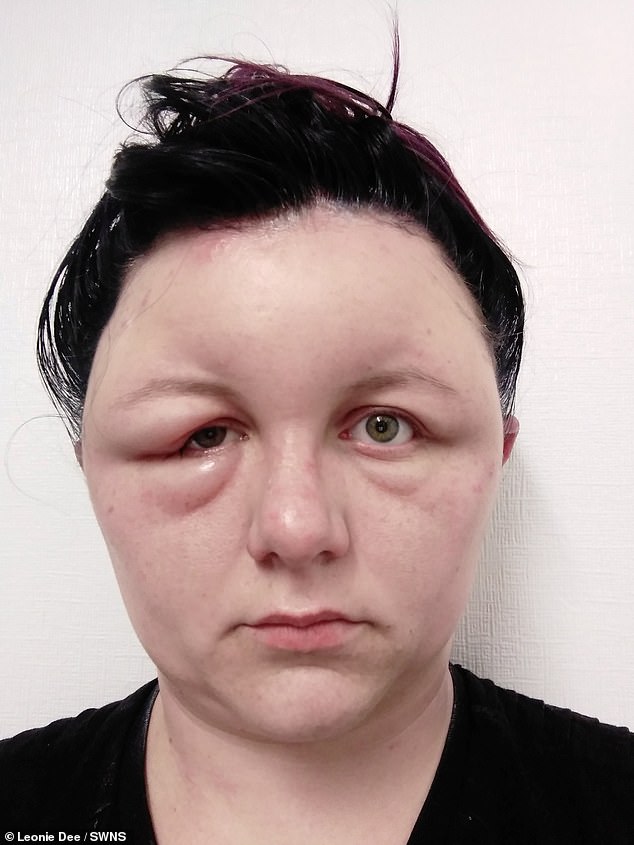 Mother-of-four Leonie quickly realised her head was swelling after applying the hair dye at home, pictured 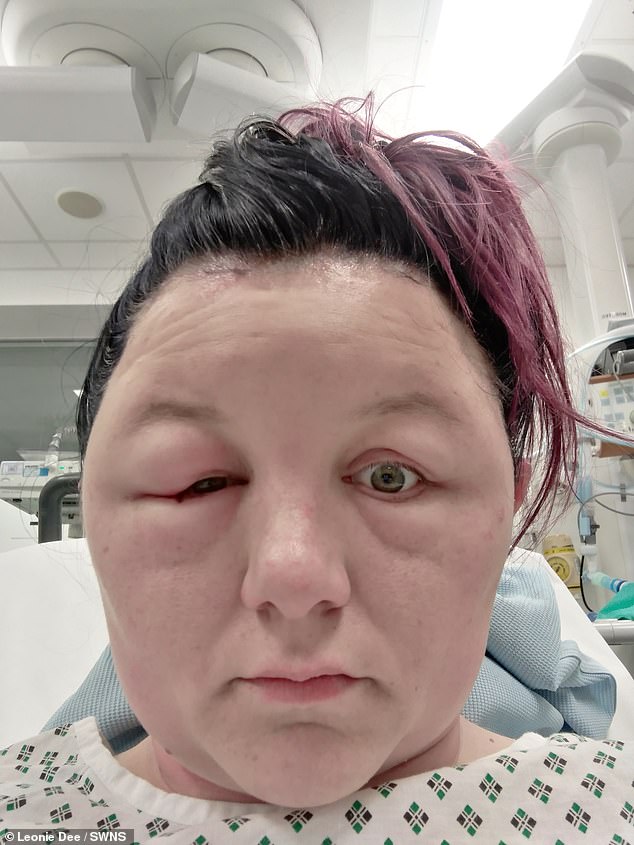 The swelling didn’t stop for hours and reached its peak when Leonie was in hospital, with the swelling almost taking over her right eye completely, pictured

She said: ‘I woke up and my hairline was covered in these big blisters, and my eyes were swollen so much I couldn’t see anything.’

Leonie was rushed to Aberystwyth Hospital at 6pm on Saturday evening – and spent over 36 hours there, being given steroids, anti-allergy tablets and creams, and put on a fluid drip.

She said: ‘The blisters kept popping and oozing out blue dye.

”They had to keep the lights off above my hospital bed because the light was irritating my eyes. All I could do was sit and wait for it to get better.’

Leonie added that she has since done her research into the Schwarzkopf hair dye – and found out that the darker colours, such as Cosmic Blue, have a higher concentration of its active ingredients, which she thinks she reacted to. 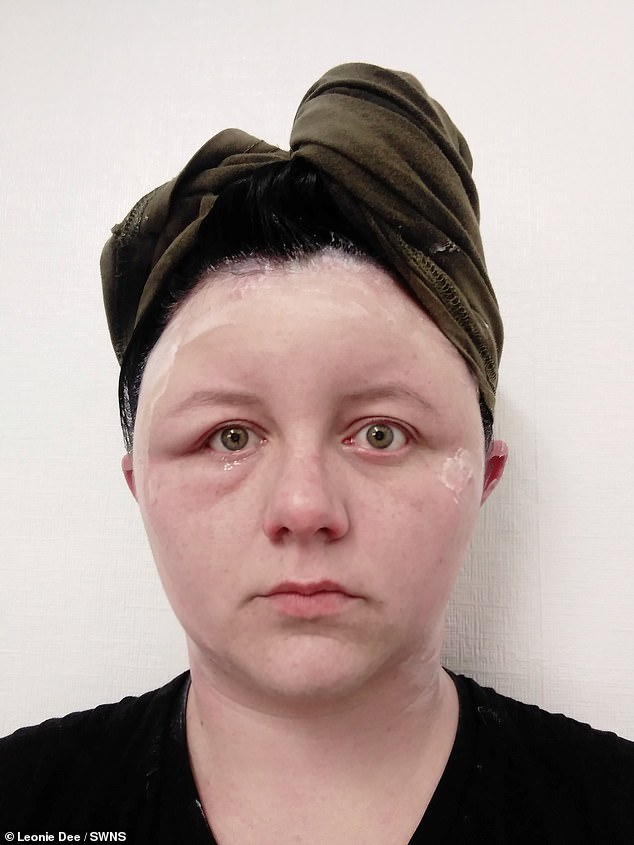 Leonie’s face pictured after the reaction, with some swelling still visible. She is taking medication for the reaction and hopes her face will go back to normal 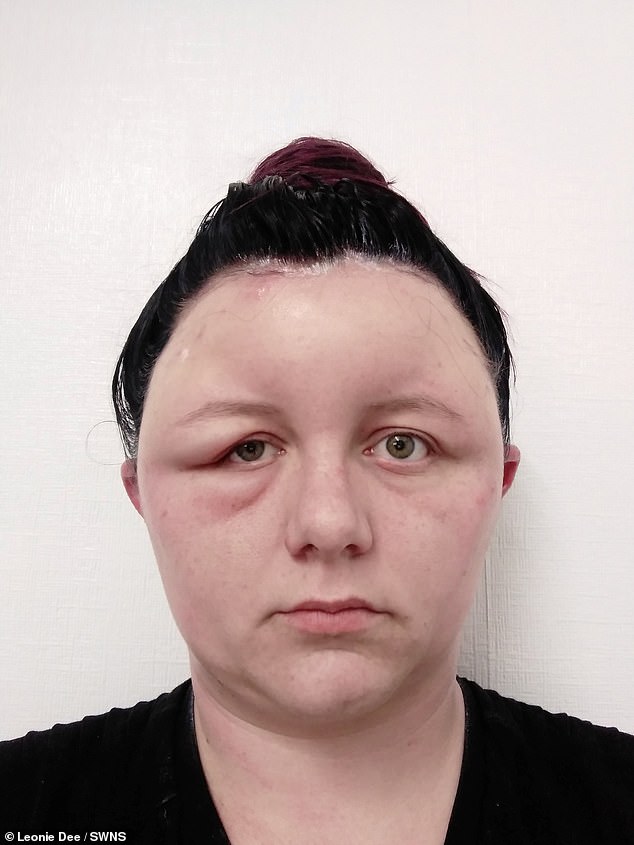 She has submitted an online questionnaire to Schwarzkopf in the first step towards making a complaint.

Leonie managed to return home on Monday morning at 10.30am – but says the swelling has not completely gone down.

She said: ‘I do feel like I’ve turned a corner and I’m feeling better in myself.

‘I just need to keep taking the medication – and waiting for my hair to grow out and go back to normal.’

Schwarzkopf were approached for a statement regarding Leonie’s story but are yet to reply.

In 2014, following a similar incident, a spokesperson for the brand said: ‘Ensuring the safety and quality of our products is a top priority in all our activities.

‘Our products are designed and manufactured to a high quality standard and comply with all applicable legislation and health and safety requirements.’