A former child protection officer-turned-mother-of-four has shared a stark warning to other parents after her baby son nearly lost his toes when a strand of her hair got wrapped around them – leaving her at risk of being investigated by authorities.

Jill Mraidi, from Orlando, Florida, opened up about the trauma her family went through after her then-four-month-old son Qasim became a victim of a condition known as Tourniquet Syndrome – which happens as a result of hair stopping the circulation of blood.

The 46-year-old was left horrified after discovering the damage done to her son’s foot after a strand of her own hair got wrapped around three of his toes inside his sock – and she is now sharing her story in the hopes of raising awareness among other parents.

Upset: Mother-of-four Jill Mraidi, from Orlando, Florida, has revealed how her then-four-month-old son Qasim nearly lost his toes when her hair got wrapped around them 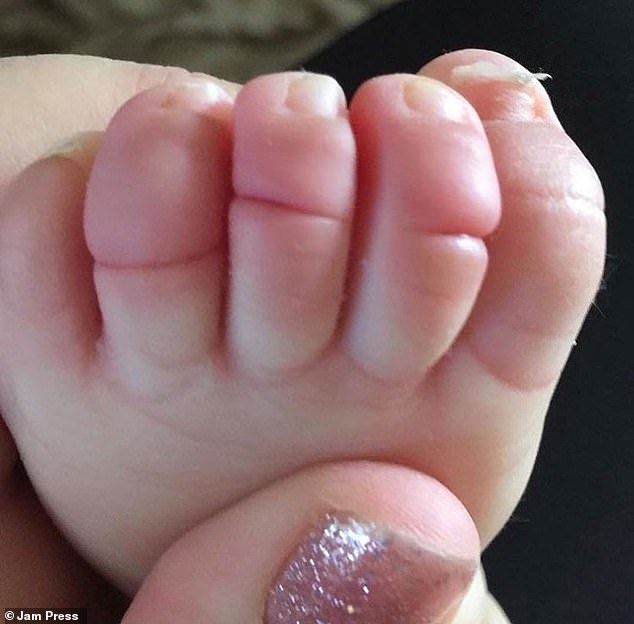 Agony: The 46-year-old was horrified to discover that her son’s toes had nearly been severed when a strand of her hair got wrapped around them in his sock (pictured)

In January 2017, Jill vaguely noticed a strand of her on Qasim’s toes while she dressed his feet in a pair of socks, but didn’t think too much about it.

When she removed his socks, she found his toes had turned red and were bulging.

They appeared to be nearly sliced off as the strand of hair had cut off circulation.

She immediately booked an appointment with her family pediatrician and Qasim was diagnosed with Tourniquet syndrome.

Speaking about the traumatic moment, Jill said: ‘Qasim was being fussy and pulling at his socks, so we took one of them off to look.

‘I vaguely remember a small piece of blonde hair that was barely visible but disregarded it thinking it could have nothing to do with what I was looking at.

‘I panicked when I saw his toes because it looked like they were being sliced off so I kept looking but I couldn’t find the cause. 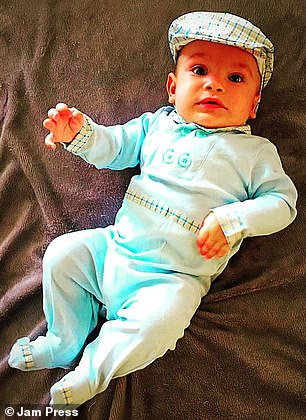 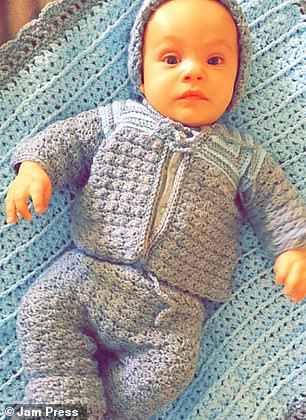 Recovery: Luckily Jill caught the condition before it caused more serious damage, but had she left it just a little bit longer, Qasim would have had to have his toes amputated 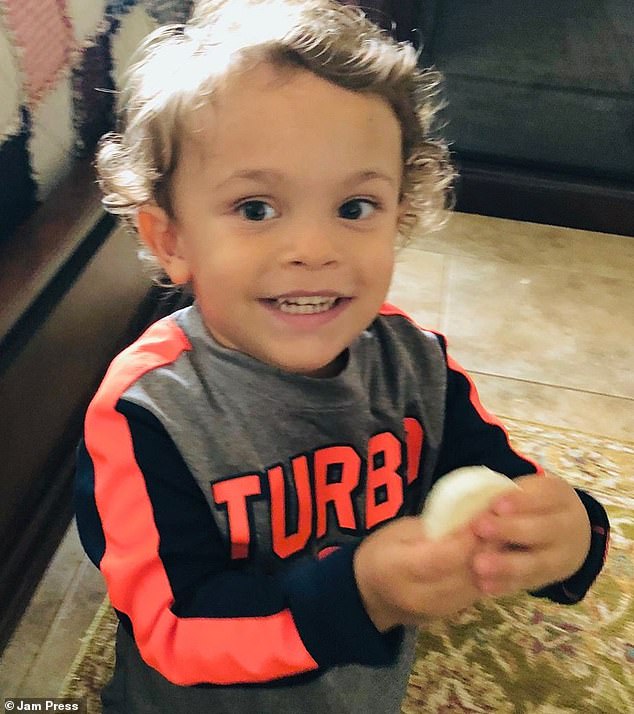 Innocent? ‘I vaguely remember a small piece of blonde hair that was barely visible but disregarded it thinking it could have nothing to do with what I was looking at,’ she said 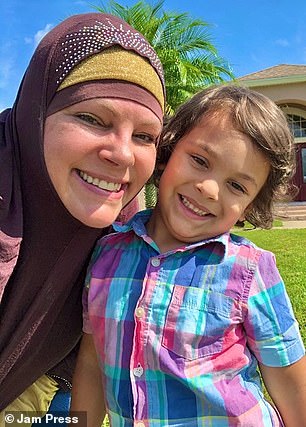 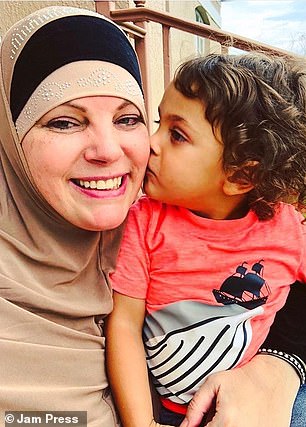 Shock: Jill admitted that she never thought the condition could have been caused by her hair – and it wasn’t until her pediatrician explained what had happened that she understood

‘I immediately called for an appointment with his pediatrician and they got us to the clinic within two hours.

‘My pediatrician looked at it and knew right away what had happened.

‘He proceeded to pull out a medical book and flipped to a page that had a picture of a baby with Tourniquet syndrome, and I agreed that’s what it was.’

However, Jill was horrified to realize the injury fell under ‘abuse and neglect’ in the state of Florida’s medical journal – and that her doctor could have informed the authorities about the case.

She said: ‘I was mortified and perplexed at the same time as I am a former child protection investigator (CPI) with the Department of Children and Families (DCF) here in the state of Florida.

‘Our pediatrician explained that was one possibility.

‘As we have been seeing him for over 10 years since the birth of my child, he agreed this was not the case with us. 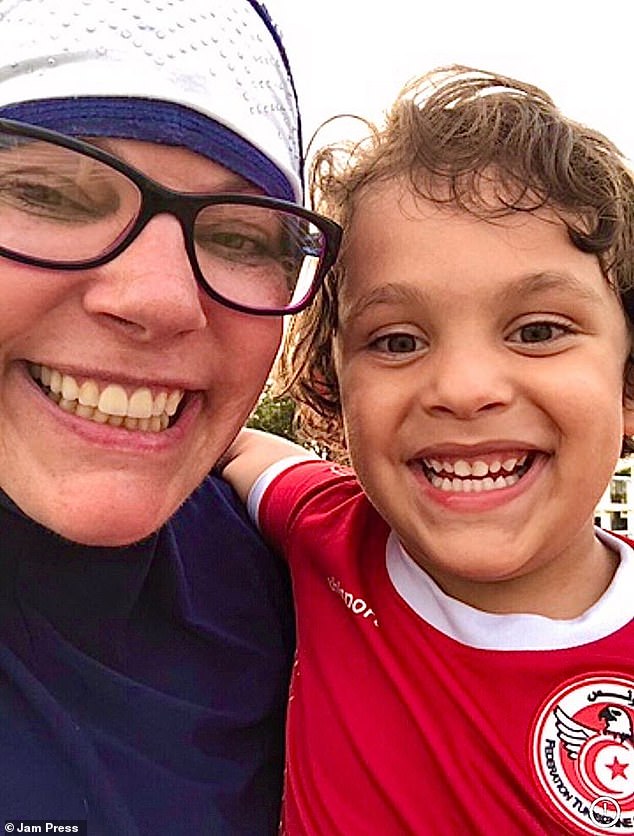 Upset: Jill was horrified to realize the injury fell under ‘abuse and neglect’ in Florida’s medical journal – and that her doctor could have informed the authorities about the case 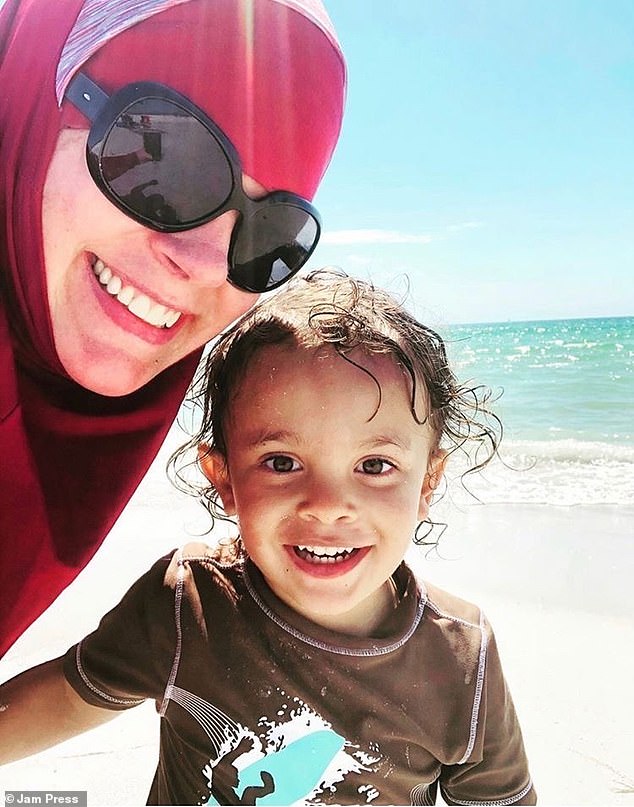 Relief: Luckily, Jill’s pediatrician had known the family for a decade, so he chose not to report her to the authorities

‘However, had he not known us he may have called it in. ‘The thought of this is horrific because any innocent parent could have become the target of a DCF investigation.

‘Also, we had seen our pediatrician a few days prior and even went for physical therapy assessment the day before, but nothing was present.’

Jill said she was incredibly lucky to have noticed the abnormality in her son’s feet, saving three of his son’s toes from being amputated.

Jill, whose son is now four-years-old, is warning parents to check items before dressing their babies.

Jill added: ‘The pediatrician was so thankful that we got him in as quickly as we could, which isn’t necessarily possible in most to pediatric offices.

‘However, in our case, it potentially saved him from having three toes amputated.

‘He has healed completely with no remaining scars.’