A grieving mother faced off with the man accused of killing her daughter in a Colorado courtroom on Thursday.

Cheryl Berreth appeared at the Teller County Courthouse for an emergency custody hearing regarding her granddaughter Kaylee, whose mother Kelsey has been missing since Thanksgiving and is presumed dead.

She was joined by Patrick Frazee, the former fiance of her daughter and Kaylee’s father who on Friday was charged with first-degree murder in the death of Kelsey Berreth.

Difficult day: Kelsey Berreth’s mother Cheryl and father  (above in foreground) were both in court on Thursday for an emergency custody hearing regarding their granddaughter Kaylee 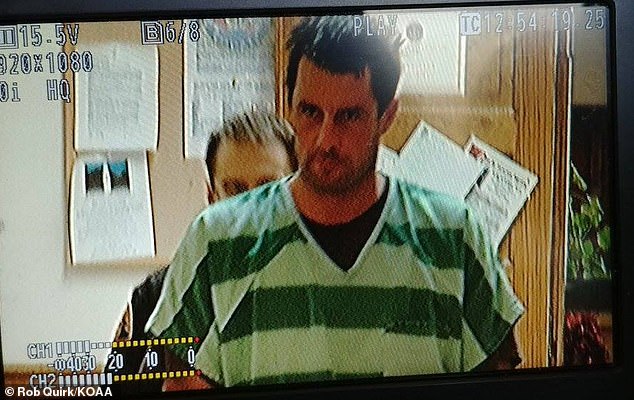 Unwelcome sight: The couple was forced to come face-to-face with their daughter’s fiance and accused killer Patrick Frazee (above), less than a week after he was charged with murder

Frazee arrived in the courtroom wearing his prison clothes and looking disheveled while a steely Cheryl kept her composure as she at one point stared down the accused killer.

She arrived in court with her husband by her side as the couple prepared to take custody of their granddaughter.

Images of the Berreths and Frazee inside the courtroom were captured by KOAA reporter  Rob Quirk.

Frazee was the first to leave after the hearing, exiting the building shackled and in cuffs before being whisked off in a police car.

The Berreths left a short time later and remained silent about the proceedings despite being surrounded by members of the media.

Frazee remained silent throughout the hearing, refusing to speak even during the few times he was directly addressed by the court.