Eight-year-old Maelys de Araujo vanished while attending a wedding in near Chambery in the Alps in August, in a case which has gripped France

The mother of a murdered French girl whose remains were found this week said her child would ‘haunt’ the ex-soldier who has finally confessed to killing her after months of interrogation.

Eight-year-old Maelys de Araujo vanished while attending a wedding in near Chambery in the Alps in August, in  a case which has gripped France.

On Wednesday, chief suspect Nordahl Lelandais, 34, admitted to killing the eight-year-old child and led investigators to her remains after police found a trace of her blood in his black Audi car.

In a Facebook post on Wednesday, the child’s grief-stricken mother Jennifer Cleyet-Marrel called him a ‘murderer’ and a ‘monster’ and said he would be haunted by his deeds.

She said: ‘I had to wait five-and-a-half months before this monster finally broke his silence.

‘Maelys will haunt you night and day in prison until you die and go to hell. Maelys had her life in front of her, you ripped it off, we never saw her again because of you, I couldn’t hold her in my arms and tell her how much I love her.

‘My little angel, I couldn’t protect you from this predator, and this guilt will follow me for a long time.

‘Maelys I am so proud of you my pet, you are so beautiful, so smiling, you are my marvel, my sunshine, you will always be in my heart.

‘This monster won’t hurt anyone now. May justice be done and no child subjected to such an act.

‘We miss you so much. We will carry on your fight until the end my princess.’ 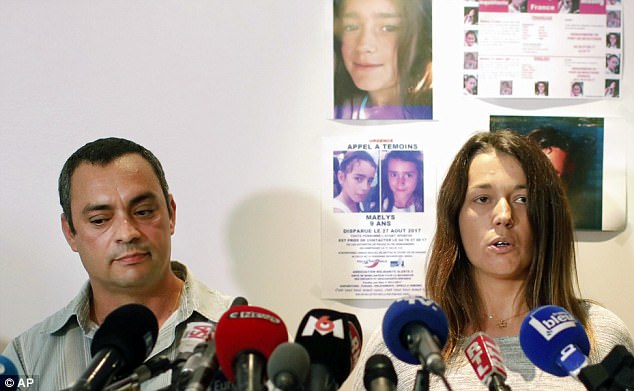 Maelys’s mother Jennifer, pictured right with her husband Joachim last September, has told her daughter’s killer: ‘Maelys will haunt you night and day in prison until you die and go to hell’ 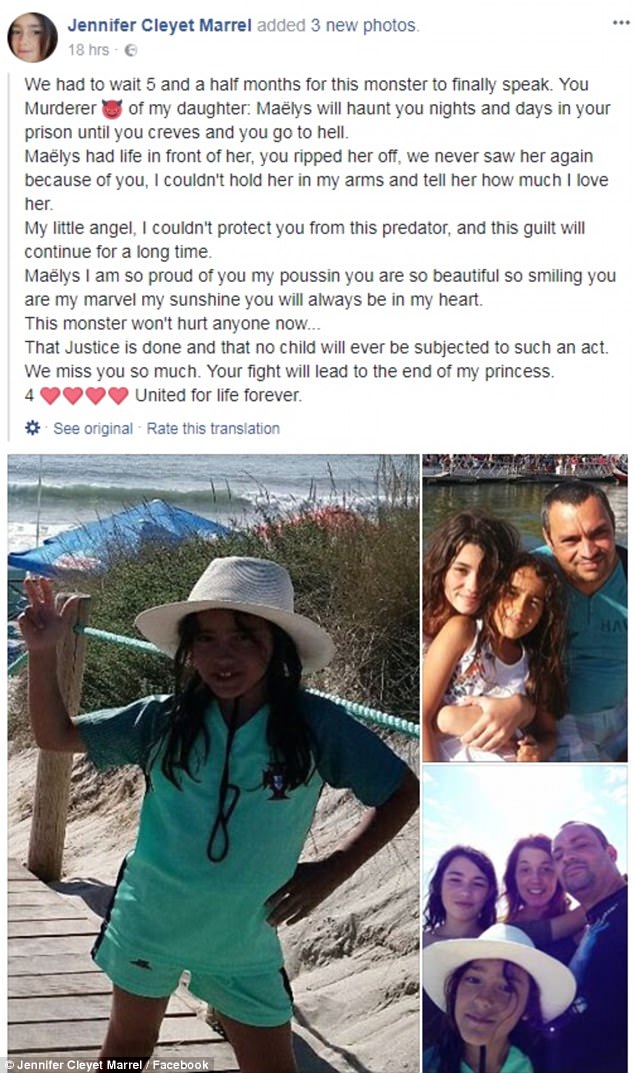 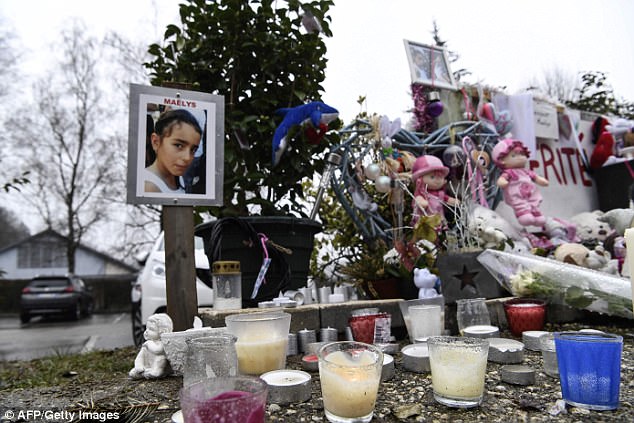 Candles, toys and messages are displayed in tribute to Maelys today in Le Pont-de-Beauvoisin where she was seen for the last time 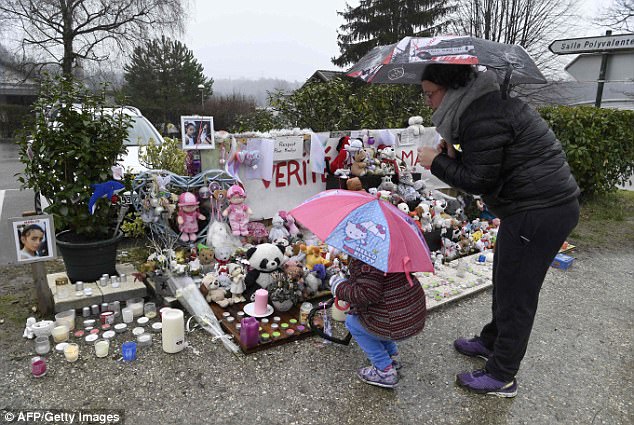 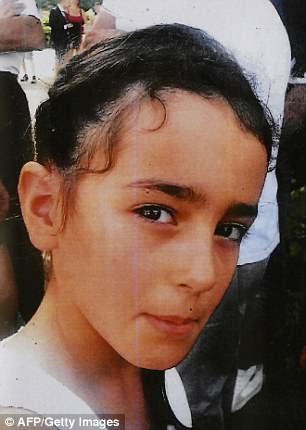 Jennifer Clevet Marrel said of her daughter: ‘My little angel, I couldn’t protect you from this predator, and this guilt will follow me for a long time’

Lelandais, a former military dog-handler who is also charged with murdering a hitchhiking soldier last April, claimed he killed Maelys ‘by mistake’ but has so far refused to give details of her death.

When a trace of her blood was found in his car he finally agreed to co-operate with the police and led them to the spot where the remains of the child were found in a remote snow-covered ravine near the village of Domessin in Savoie.

Relatives of the dead soldier, 24-year-old Arthur Noyer, said they too were hoping to learn the truth about his death.

Noyer was last seen in the early hours of April 12, 2017, hitchhiking in Chambery after leaving a nightclub. Parts of his skull were found on a hiking tail in Montmelian, near Chambery, in September.

Telephone records place Noyer and Lelandais in the same area at the same time on the night of the dead man’s disappearance.

He admitted killing the youngster  ‘involuntarily’ after she went missing during a wedding in Pont-de-Beauvoisin, north of Grenoble. 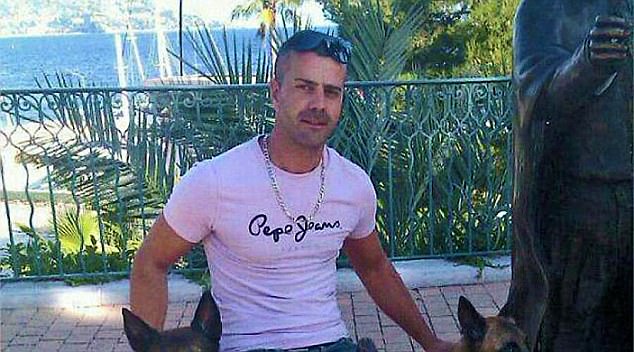 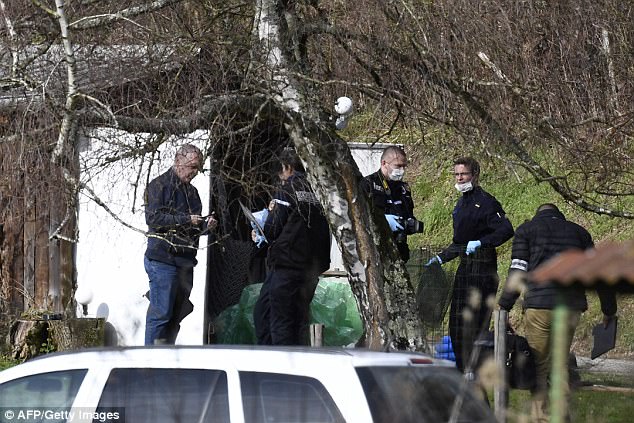 Police were reported to have found the buried bones of the dead child on Wednesday. They are pictured by a garden cabin along a road near Domessin in the Eastern French region of Savoie on Wednesday

There are now suspicions that Lelandais could be responsible for the unsolved Alps murders in which a British man, his wife and mother-in-law were killed in a forest car park in September 2012.

Other cases in which it is suspected that Lelandais may be involved include that of Adrien Mourial, a 24-year-old Belgian citizen who went missing near Lake Annecy in July, and Jean-Christophe Morin and Ahmed Hamad, who vanished in 2011 and 2012 respectively.

Lelandais’ alleged links to these murders have prompted police to begin poring over files of other missing people in the region amid fears that he could be a serial killer.

A Grenoble prosecutor said last night that the parents of Maelys are ‘not longer in the dark; adding that ‘they know that their daughter is dead, that she was killed. And a few minutes ago, we told them that we had discovered the remains of the child.’

‘It is this terrible conclusion that the prosecutor of Grenoble has delivered, the culmination of six months of investigation and research.’ he added. 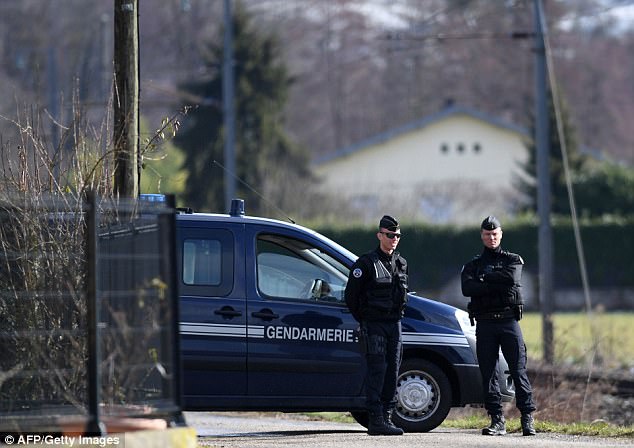 French Gendarmes stand by a vehicle along a road near Domessin in the Eastern French region of Savoie on February 14, 2018 during the transport of suspected killer Nordahl Lelandais, a former military dog trainer, to the alleged scene of the murder

Lelandais was taken for the first time since he was charged to the scene of the crime on Wednesday under a heavy police escort, Parismatch.com reported.

His change of heart was thought to have come about after a trace of Maelys’s blood was found in the boot of his car, according to a source who spoke to the AFP news agency on condition of anonymity.

It took a whole day of searching, made very difficult by the snow and the steep terrain, to uncover the remains of the little girl, Le Figaro reported.

The unmarried suspect from the village of Domessin, 18 miles from Chambery, was also charged in December over the April killing of a hitchhiking soldier.

There are also suspicions that Lelandais could be responsible for the unsolved 2012 murders of Saad al-Hilli, Iqbal al-Hilli and her mother Suhaila al-Allaf who were shot dead while on holiday in Chevaline, near Annecy. A passing French cyclist, Sylvain Mollier was also killed. 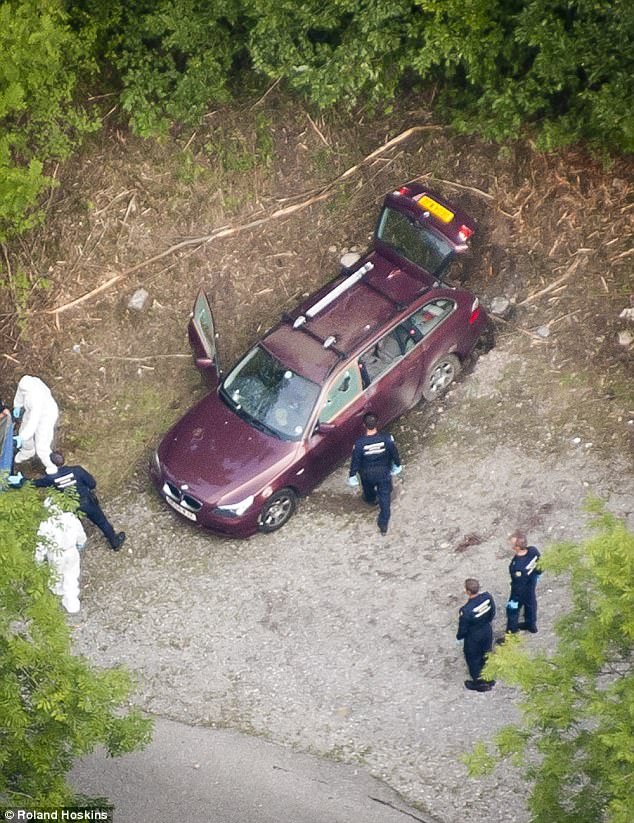 There are fears that Lelandais could be responsible for the unsolved Alps murders in which a British man, his wife and mother-in-law were killed in a forest car park in September 2012 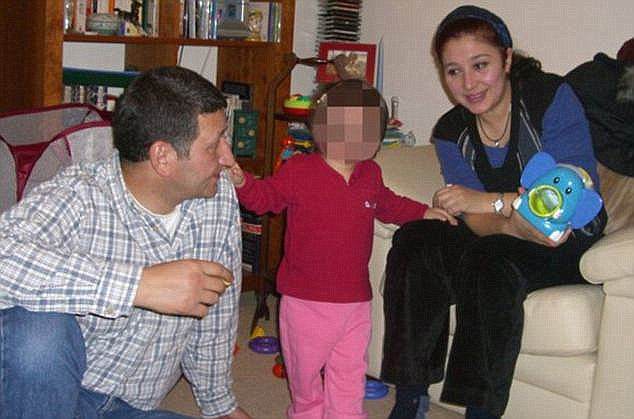 There are also suspicions that Lelandais could be responsible for the unsolved 2012 murders of Saad al-Hilli (left), Iqbal al-Hilli (right) and her mother Suhaila al-Allaf who were shot dead while on holiday in Chevaline, near Annecy

But despite a massive manhunt, the investigation failed to result in any charges – but hopes were rekindled in December when Annecy prosecutor Véronique Dénizot confirmed to The Telegraph that the case would be re-opened to probe Lelandais’ possible involvement.

No motive was found by police for the murders despite extensive investigations in Britain, France and Iraq. Investigators have previously suggested the killer could have a military background. 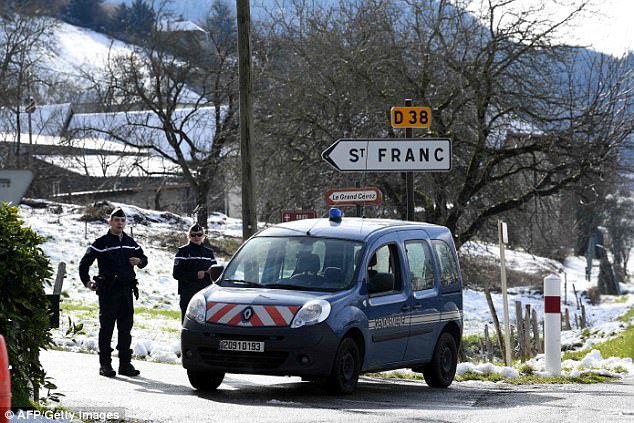 French Gendarmes block road access with a vehicle near Saint-Franc, in the Eastern French region of Savoie on February 14, 2018, where a forest is being searched in relation with the August 2017 disappearance of the eight-year-old girl 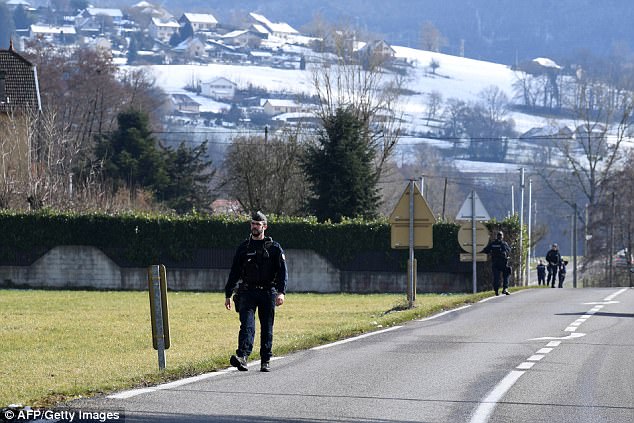 French Gendarmes along a road near Domessin in the Eastern French region of Savoie on February 14, 2018 during the transport of suspected killer Nordahl Lelandais to the alleged scene of the crime

The prosecutor said Lelandais told investigators on Wednesday that he killed her accidentally, hid the body and then returned to the wedding party before eventually dumping the body in the ravine.

Lelandais had also been a guest at the wedding in Pont-de-Beauvoisin, near the mountain city of Chambery – but it is not clear if he was formally invited or not.

The prosecutor said Lelandais did not explain the circumstances of the girl’s death. A former army dog handler, Lelandais was in September charged in relation to her disappearance.

One unconfirmed report said that the police dogs found the girl’s skull and later her bones in the Chartreuse Massif, about an hour from the wedding location.

At the time of the girl’s disappearance he was reported to be a friend of the groom who turned up uninvited to the wedding reception.

Several clues pointed towards the former soldier during the police investigation into the disappearance, officials say, including a trace of her DNA found in his vehicle, mobile phone data, and CCTV images filmed on the night she vanished.

The footage showed a car, identified by investigators as belonging to Lelandais, with ‘a faint silhouette in a white dress’ like the one Maelys had been wearing.

Her parents ‘recognised elements of the dress, particularly the strap’, their lawyer Fabien Rajon said.

Lelandais’s defence had previously challenged the chronology of events as described by prosecutors. 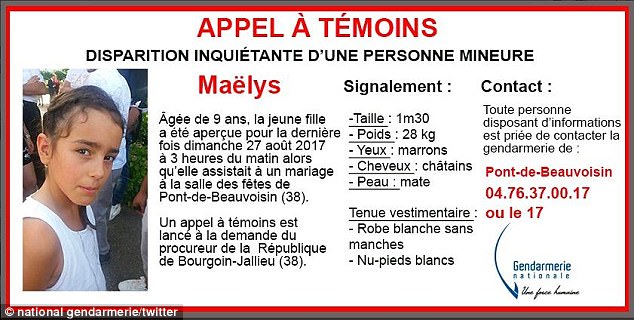 Lelandais was initially charged with ‘kidnapping, illegal confinement or arbitrary detention of a minor of less than 15 years’ in connection with Maelys’ disappearance 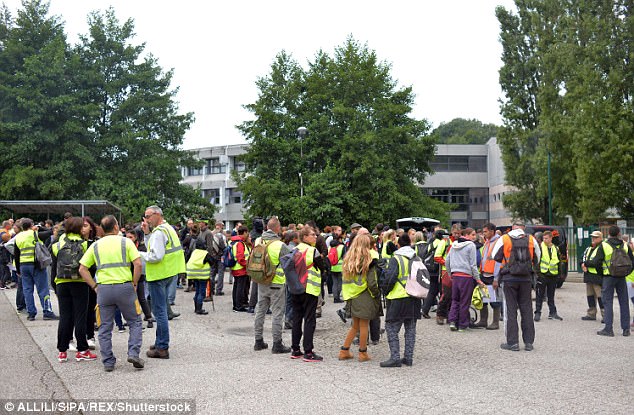 Volunteers: Thousands of people take part in searches for Maelys after she went missing last year 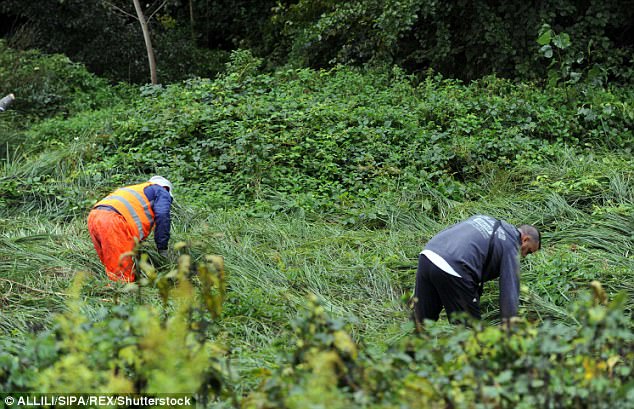 Time running out: No signs of the missing girl were found last year

His lawyer confirmed last year that while a trace of her DNA had been found on the dashboard, his client ‘completely denied’ kidnapping her.

He said several DNA traces, including that of his client, had been found on the dashboard and that someone who was in contact with the child could have ‘transferred’ her DNA in to the vehicle.

He also suggested that the children could have climbed into the car unbeknownst to the driver, noting that all the windows were left down during the party. 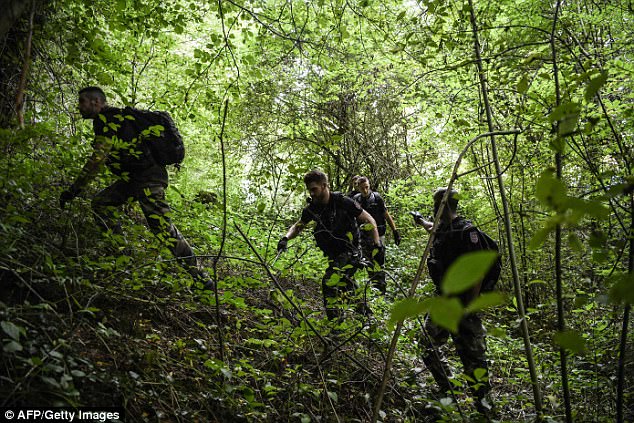 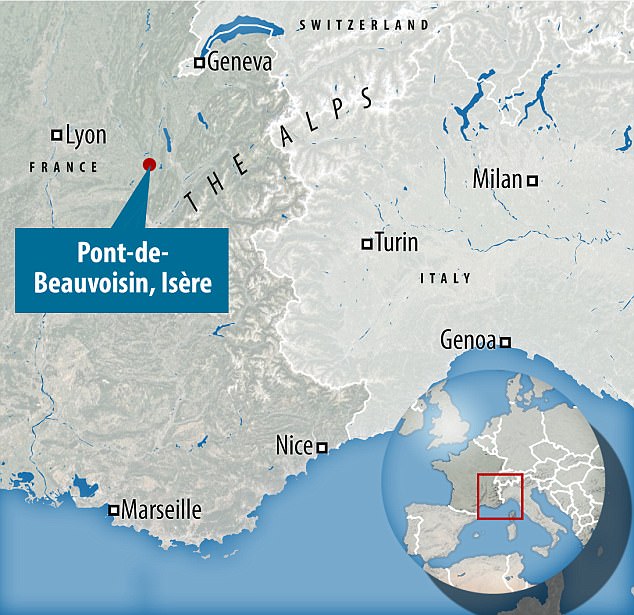 Suspect: The man in police custody is reportedly a 34-year-old man who turned up to the wedding reception uninvited late on Saturday evening