Mother-of-one, 24, saved a deposit for her three-bedroom house in just TWO years

A mother-of-one who began saving for her first house at age 22, revealed how she was able to buy a three-bedroom property within two years.

The Health Care Assistant told how moving in with her mother allowed for the couple to save around £700 per month, despite the expensive cost of childcare needed for her four-year-old son, Markus.

The mother-of-one and Reivan had no help from the bank of mum and dad, but instead made sacrifices so they could buy their own home by the time she was 24-years-old.

Ria Alice, 25, (pictured with her son Markus, four and boyfriend), from Nottingham, told how she was able to buy her first house with her boyfriend Reivan Griffin, 26, after saving for a 10 per cent deposit in just two years 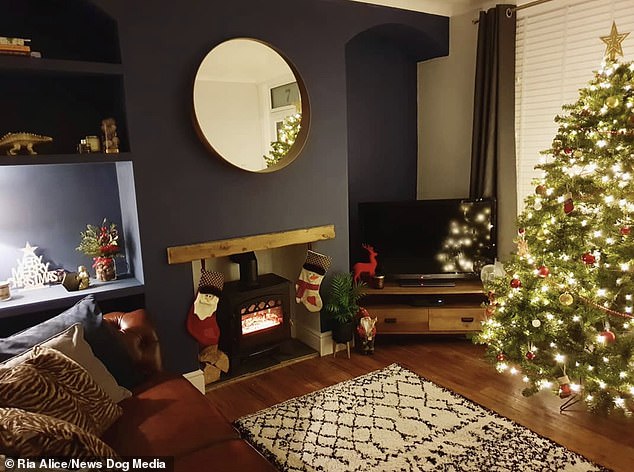 The mother-of-one who always knew she wanted to own a house, achieved her dream at the age of 24 when the couple and her son Markus moved into a three-bedroom Victorian terraced house in Nottingham (pictured) 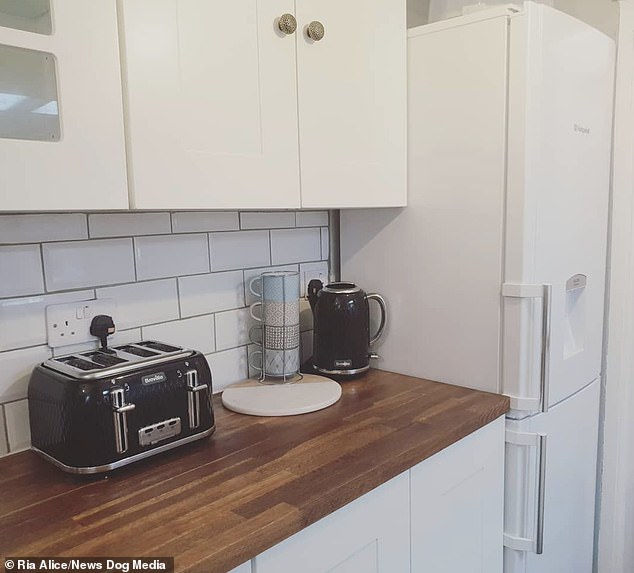 The average first-time buyer in the UK faces an average wait of ten years to save enough to get on the property ladder (pictured: Ria’s kitchen insider her renovated home)

Speaking about the achievement of buying her own property at a time when figures suggest the average first-time buyer faces an average wait of ten years to save enough money to get on to the property ladder, rising to nearly 16 years in London, Ria said:

‘I won’t lie, saving a deposit for our house was a hard process,’ she said. ‘We moved back in with my mum and cut out all non-essential outgoings.

‘My motto was “Live like you’re broke!” so I got rid of all my online subscriptions and stopped getting takeaway coffees for example.

‘It was definitely a killer!’ explained Ria. ‘But you have to remember that these little sacrifices won’t last forever. They’re temporary and mean you can make a better life for you and your family.’ 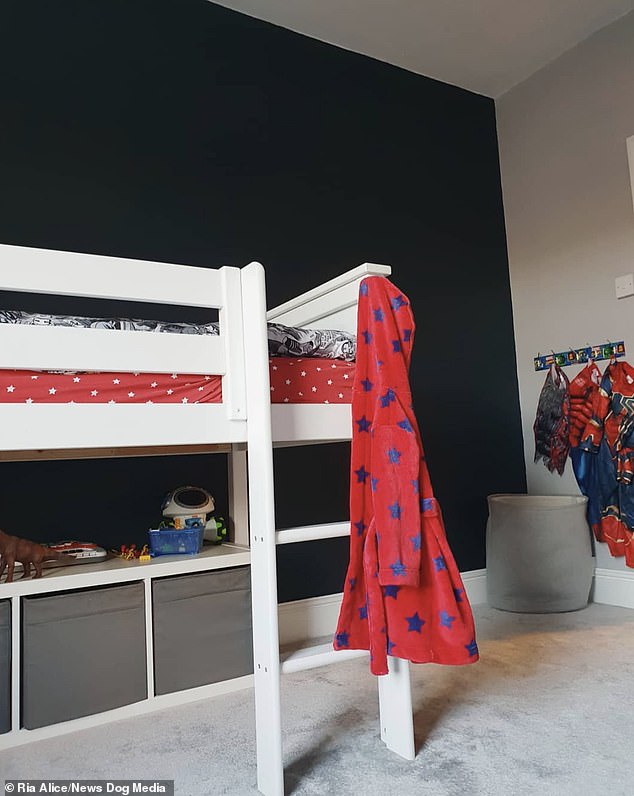 Ria, who works as a Health Care Assistant and her boyfriend Reivan, who works as a customer delivery driver, moved back into Ria’s mother’s house to help cut costs  (pictured: Markus’s bedroom) 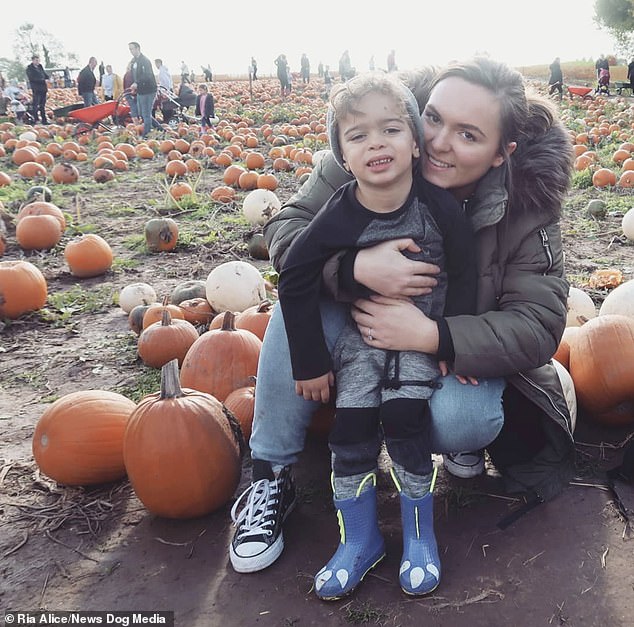 ‘It all pays off in the end. The day we bought our first home was genuinely one the happiest days of my life. I was over the moon!’

Where did Ria save money?

Ria found new ways to socialise with friends and go on cheap family days out with her son in order to cut costs.

‘Even when I was saving, I managed to carry on enjoying a social life simply by visiting my friends for a cuppa rather than going out to a restaurant for dinner,’ she explained.

‘And I never missed out on days out with Markus. We found local activities like Easter Egg hunts and Halloween trails that were just £1 for admission or sometimes even free.’

‘With a bit of work and research, it’s definitely possible for young people to get on the housing ladder.’

Ria, who lived with her grandmother before moving into her mother’s house, also assessed her outgoings to boost savings.

‘Moving back in with my mum gave me a massive opportunity to be able to save up for a mortgage deposit,’ she explained.

‘I was very lucky to be able to do this as it meant not having to pay rent or other household bills elsewhere.’ 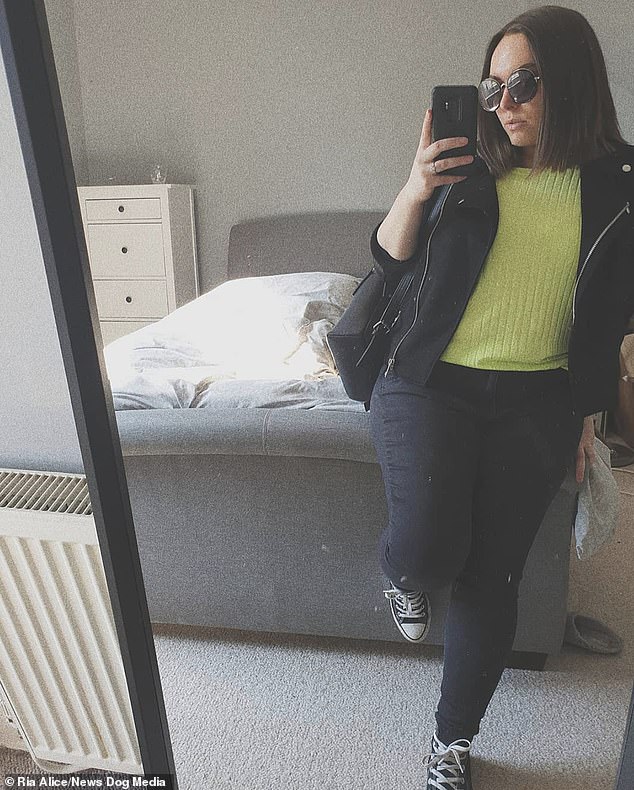 Ria said it’s possible for all young people to get on the property ladder with dedication and research. She cancelled a number of non-essential subscriptions such as Tidal and Beauty Box 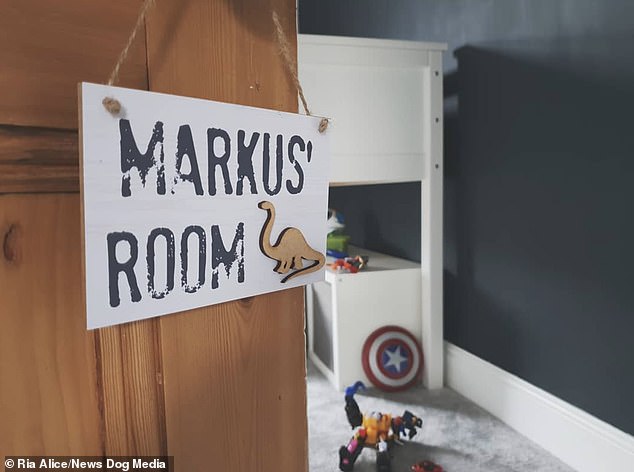 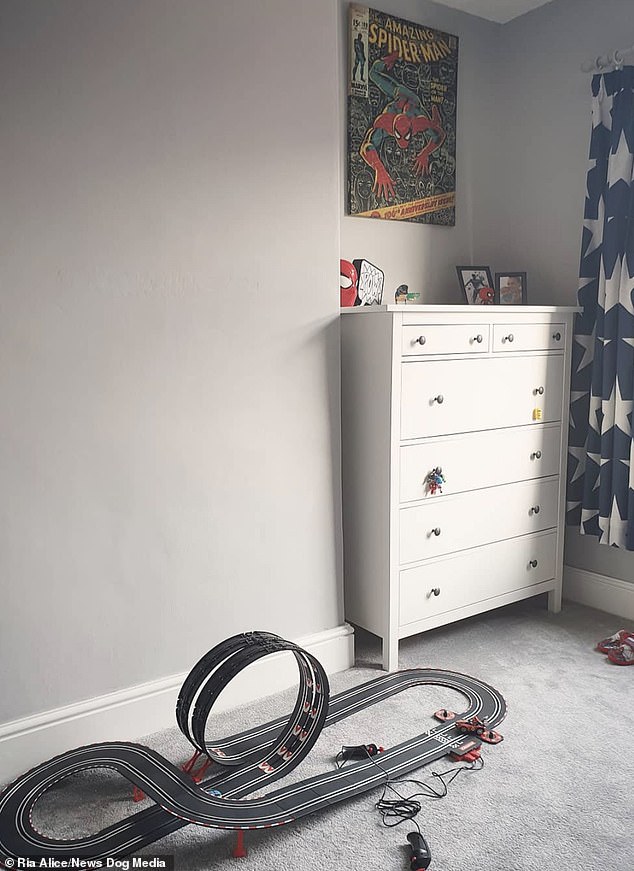 Ria also searched for cheaper car insurance deals and switched to a sim-only phone contract to reduce her direct debit expenses. Pictured, her son’s bedroom inside her home which the millennial saved up for and bought in just two years 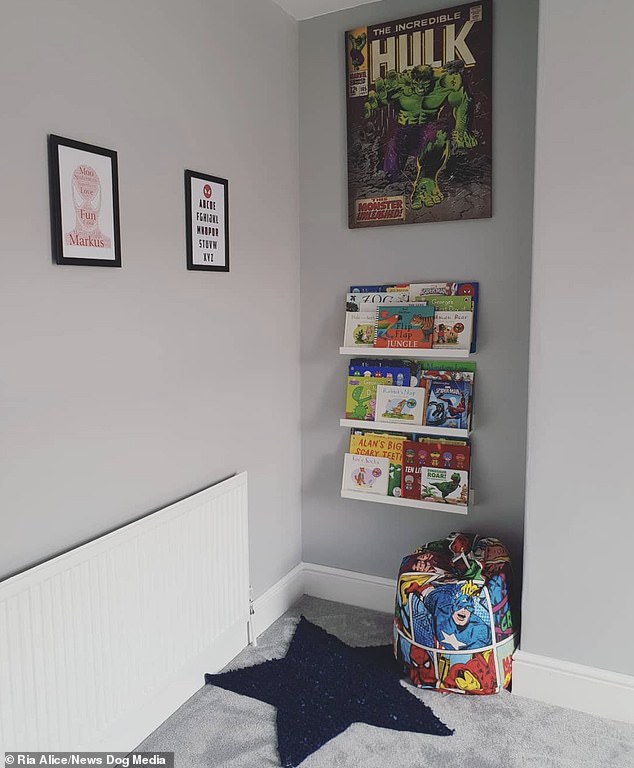 The homeowner made a decision not to spend on anything that wasn’t essential, including buying a shiny new phone. Pictured, her son’s bedroom

She continued: ‘I also went through all my outgoings and made a list of what was important and what wasn’t.’

‘For example, childcare was important so I could go to work. But my monthly subscriptions to Hayu, Tidal and Beauty Box weren’t.’

‘I cut out that spending and immediately had an extra £30 per month to save. Every penny counts.’

Ria also reviewed her direct debits to see if there were any ways she could reduce her expenditure.

‘For example, I shopped around for a cheaper car insurance deal and it went down from £72 to £58 per month,’ she said.

‘And when my phone contract ended, I just kept my old handset and switched to a SIM-only deal which reduced my costs considerably.’

‘Unless you need it, don’t spend it. And I didn’t need a shiny new phone.’ 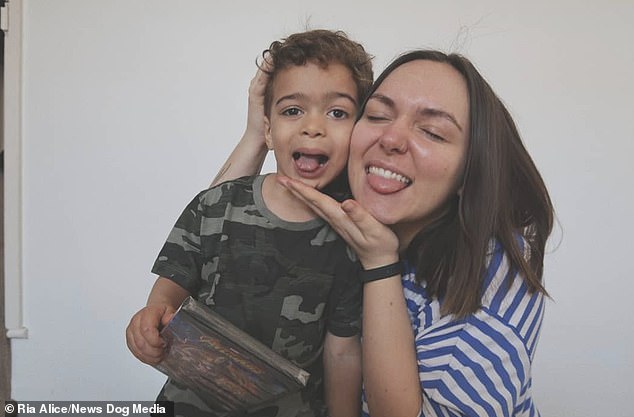 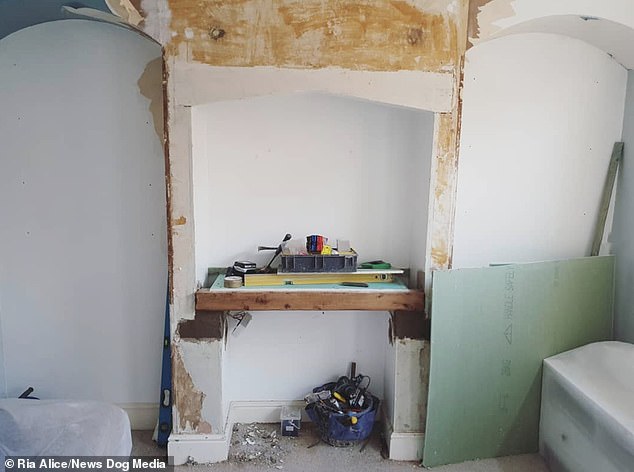 The mother-of-one revealed she would ‘live as if she was broke’ – not buying holidays or splurging on impulse meals (pictured: living room during refurbishment) 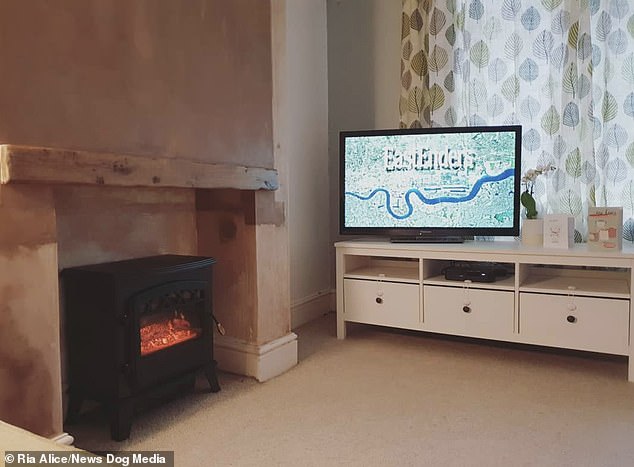 Ria, who is in the process of renovating her new home, visited friends or they’d come to her – instead of going to bars 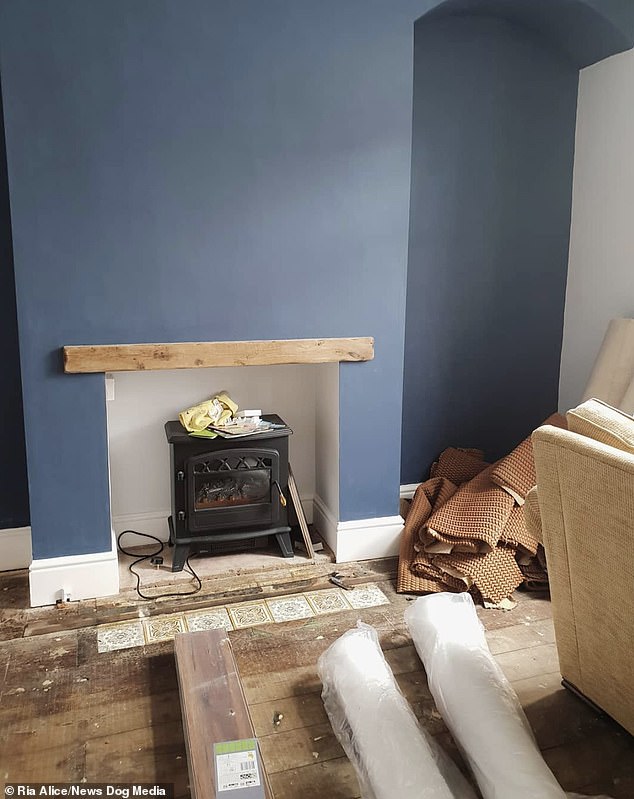 Ria found family-friendly activities for free or as little as one pound so she could still spend time with her son and boyfriend whilst saving. Pictured, Ria’s living room as she’s refurbishing

‘The way I thought about it was, “Will I miss out by not getting that takeaway coffee every day or would I rather save all that money and be able to buy my house sooner?”‘

She continued: ‘It’s only a few months of sacrifice and then you can do what the hell you like again! It’s worth it in the end.

Offering advice to others who are looking to cut back on costs, she said:

‘For mums who want to carry on treating their kids alongside saving, there are so many family-friendly, local activities to do for free or for as little as a quid. You just need to do your research and look around.’ 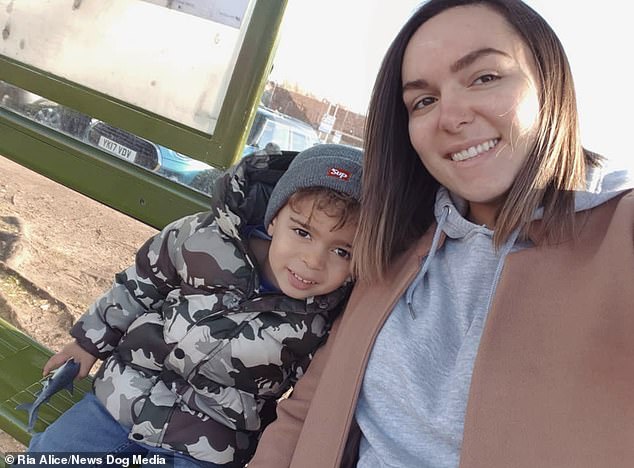 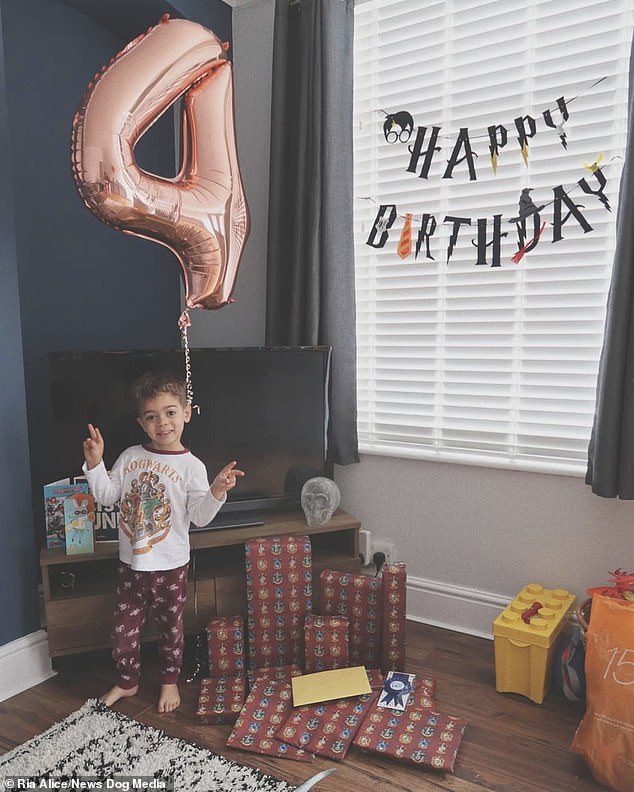 Ria revealed there was times when she would have to look after her son despite not having much sleep from working overtime. Pictured, Markus, four 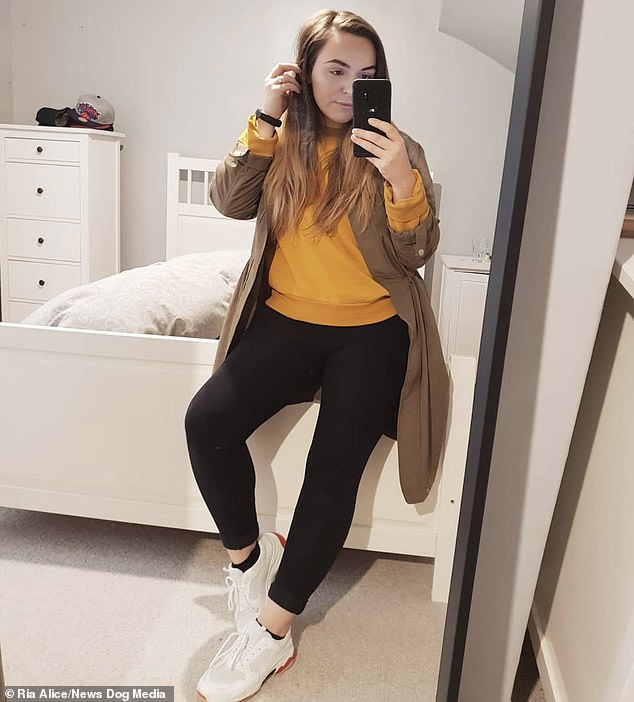 The mother-of-one believes if you really want a property, you will be willing to do what it takes

The mother-of-one, whose boyfriend works as a customer delivery driver, has shared how she was able to buy her first house – which is a Victorian terraced property in need of renovation – on YouTube.

She urges others to be resourceful and try to find multiple streams of income to save for the property they really want.

‘When you’re saving for a deposit, work extra,’ she explained. ‘Get a second job, join a temp agency – anything to make that little bit of extra money whilst you save.’

‘As well as working in my regular job, I did nighttime shifts in the evening so I could earn an extra income.

She added: ‘Sometimes the day after. I would have no childcare arranged for Markus so I would look after him having had very little sleep.’

‘It was really hard but it pays off when you have more money to save. If you really want that property then you will do what it takes.’ 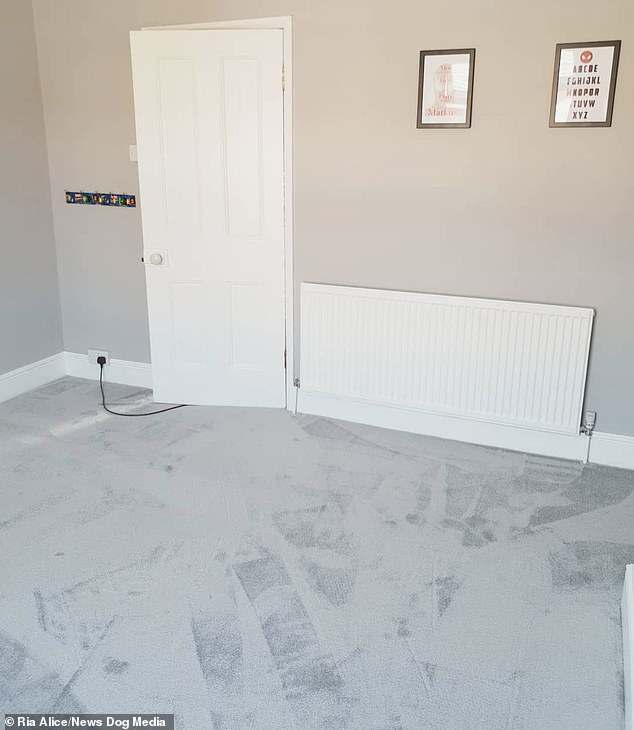 Ria, (her bedroom pictured during renovation), who now shares her life on YouTube, revealed she has started documenting the renovation of the house and sharing advice on saving 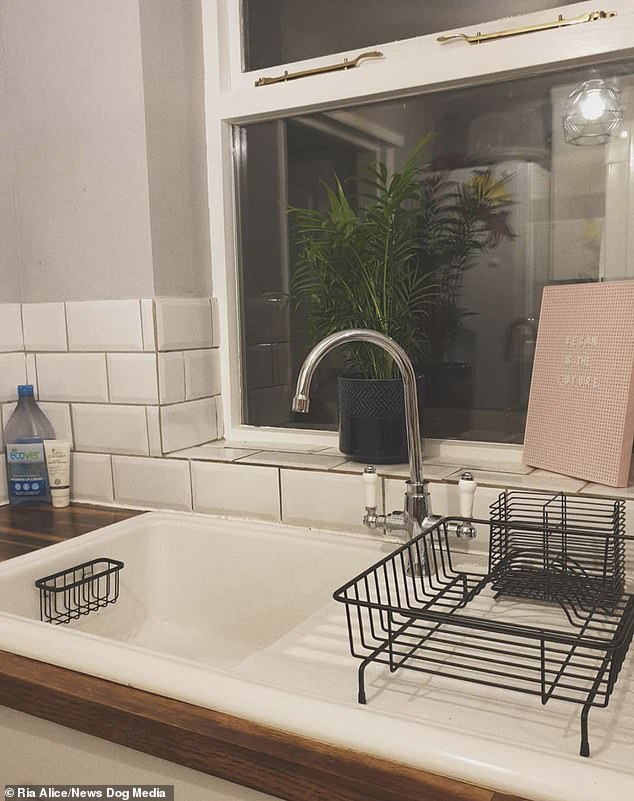 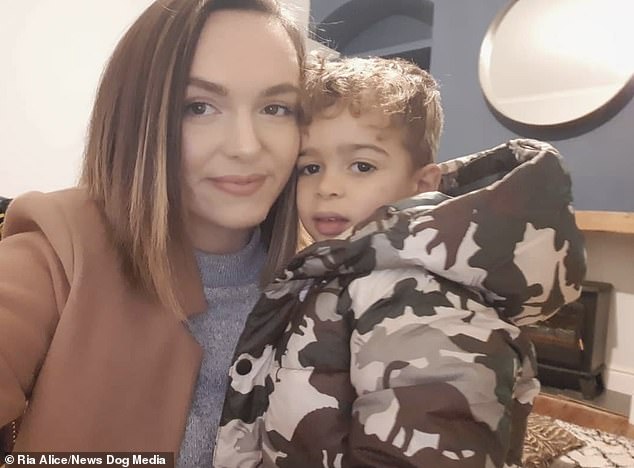 Ria, (pictured with Markus), has been inspired to keep renovating properties and moving up the housing ladder

While Ria’s house is in need of a lot of modernisation, she was still over the moon when they bought it.

‘Buying a home has also helped me so much in terms of building my social media platform,’ she explained. ‘I now post videos about home renovation on YouTube which has brought in a whole new audience to my channel.’

She continued: ‘As much as I adore our home, I won’t be staying here forever. We want to stay here for another seven years or so. I’m inspired to keep renovating properties now and moving up the housing ladder.

‘I get a lot of requests from my YouTube subscribers for video about buying your first home. I love helping them with advice and documenting our renovation journey on social media’

‘I plan on making more content for first-time buyers and I’m currently making a video on what to look for when viewing a property.’

What advice does Ria have for those looking to get on the property ladder?

MOVE BACK IN WITH YOUR PARENTS: If you can, move back into your parents’ house or your grandparents – anyone who can accommodate you to cut out rent payments whilst saving. It makes a huge difference.

WORK EXTRA: Whether it’s getting a second job, doing extra shifts or joining an agency, find a way to increase your income and save more money. Once you get that extra salary in your bank account, put it straight into your savings.

MANAGE YOUR OUTGOINGS AND SEE WHAT YOU CAN SACRIFICE: Make a list of your expenditure and divide into a list of what is important and what isn’t. Do you need that Hayu subscription? Can you reduce your car insurance? It’s amazing what you can save by re-evaluating your outgoings and getting rid of any non-essential costs!

LIVE LIKE YOU’RE BROKE: This is my favourite tip for anyone wanting to get on the property ladder! Live like you have no money to go on that random meal out or on holiday. Only go out on special occasions and only buy what you need not what you want.