Mother-of-one, 29, was on brink of taking own life but stopped when daughter giggled in her sleep

A mother-of-one almost took her own life after failing to lose weight – but was stopped when her three-year-old daughter sweetly giggled in her sleep.

Jennifer Malik, 29, thought she was a ‘fat, useless mum’ as she was so large she couldn’t play properly with her daughter Naomi in the park.

However as she sat clutching pills at home Mrs Malik started crying as she watched her sleeping daughter and knew things had to change, reports the Mirror.

Since then she’s managed to lose 15st in the first 16 months and says making healthier choices and shredding the pounds has made such a difference.

Jennifer Malik, 29, thought about taking her own life but was stopped when her then three-year-old daughter Naomi, pictured with her mother and father Billy, giggled in her sleep

Mrs Malik explained how she had been bullied all her life for being overweight. In primary school her peers would call her ‘fat’.

When she moved up to high school, other pupils would throw things at her and kick her. They would even stand up in class to tell her her legs were ‘too big’.

Mrs Malik claims strangers would point and laugh at her on the street every time she left the house.

She said that even ‘when I got all dressed up for a night out, people would laugh and call me a beached whale.’

She also revealed that she was scared for her daughter as she might be ‘teased for having the massive mum.’

The mother stopped leaving the house because she was too scared about the comments people would make.

Mrs Malik said she would comfort eat and have ‘at least four or five takeaways a week like pizzas, burgers, kebabs. I also ate pot noodles and pies.’

She says she was stuck in a vicious cycle of eating when she felt depressed and not exercising because she was afraid to leave the house. 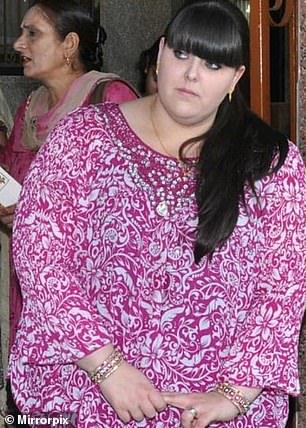 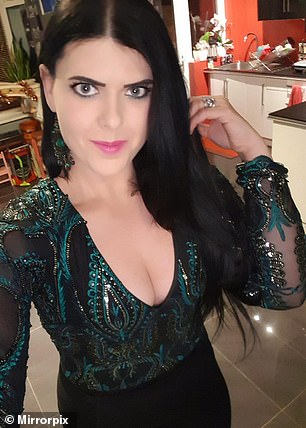 Mrs Malik, pictured left before the weight loss and right after, has managed to lose 15st in the first 16 months and now works as a personal trainer so she can help others with their weight

Every year the mother swore she would change and get healthy but she said ‘each year kept slipping by’.

On that desperate night in 2016 after her husband Billy left for work, Mrs Malik decided she ‘couldn’t feel like a failure anymore’.

When she was sitting with Naomi, she said that she knew he would be home from work soon so her daughter wouldn’t be alone for a long time.

However when the little girl turned over and giggled, Mrs Malik knew she had to change and when Billy got home they talked about their situation for hours.

The couple, who have been together for 12 years, decided to throw out all the processed food in the house.

Along with Billy, a taxi driver, she started buying fresh vegetables and chicken to improve their diets.

She said: ‘I enjoyed cooking and my husband and daughter loved eating the food.’

Mrs Malik also started exercising doing dance workouts – that little Naomi would often join in with – in her living room and going to the gym.

Another way she tried to lose the weight was by walking after each evening meal, even though running into people on the street made her nervous.

However when she crossed paths with a group of strangers they seemed supportive of her efforts and simply said ‘good evening.’

Due to her rapid weight loss Mrs Malik was left with excess skin hanging around her tummy and decided to take out a £10,000 loan to have surgery.

She said: ‘When Naomi sees old pictures of me now, she says, “look! Mummy shrank!”.’

Mrs Malik said she is now becoming a personal trainer so she can help others with their weight.