A mother-of-one has defied the odds and is walking again after a motorcycle accident left her with a debilitating nerve condition.

Amberly Lago was riding her Harley in Los Angeles, California, in May 2010 when she was accidentally hit by an SUV and flung 30 feet down the street.

Lago landed on her right leg, which left it crushed beyond repair. But in the weeks that followed the accident, even the slightest touch left her in severe pain.

The condition allegedly causes the most pain a human can endure and has come to be known as ‘suicide disease’ because of how many people take their own lives following a diagnosis.

Amberly Lago, 46, from Los Angeles, California, has defied the odds and is walking again after a motorcycle accident left with a debilitating nerve condition. Pictured: Lago in the hospital in 2010 with her daughter 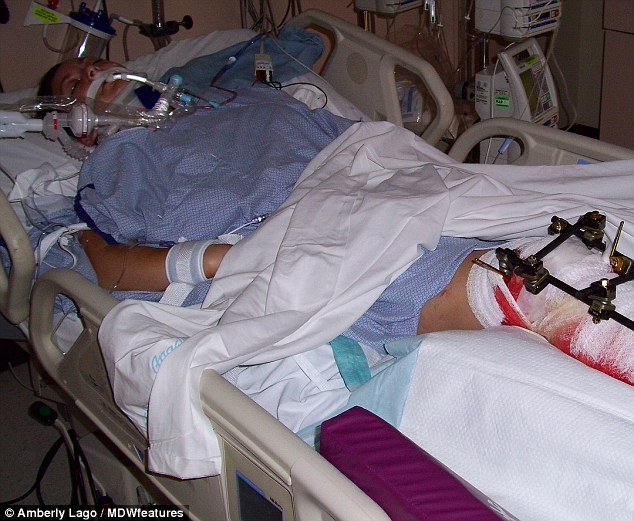 She was hit by an SUV and flung 30 feet down the street. Lago spent three-and-a-half months in the hospital following her accident and underwent 34 surgeries. Pictured: Lago in the hospital

‘I remember every detail from the moment I realized the SUV didn’t see me, the impact and how it felt to be crushed, how it felt to slide across the pavement,’ Lago, a personal trainer, said.

‘I felt my flesh being ripped off and I saw my leg in pieces.’

Lago was rushed the hospital where doctors, despite the initial recommendation to amputate, saved her leg.

After a couple of weeks, as her leg remained purple and swollen, she was diagnosed with CRPS.

According to the National Organization for Rare Disorders, CRPS usually develops in an arm or a leg and after an injury, a surgery, a heart attack or a stroke.

Symptoms include a burning sensation in the affected extremity; sensitivity to touch or cold; swelling; and changes in skin temperature, skin color and skin texture.

The cause of CRPS is not well-understood but is believed to be due to the peripheral and central nervous systems being injured.

Currently there is no known cure although there are a number of therapies used to manage symptoms including oral and topical pain relievers, nerve-blocking medications and behavioral management therapy. 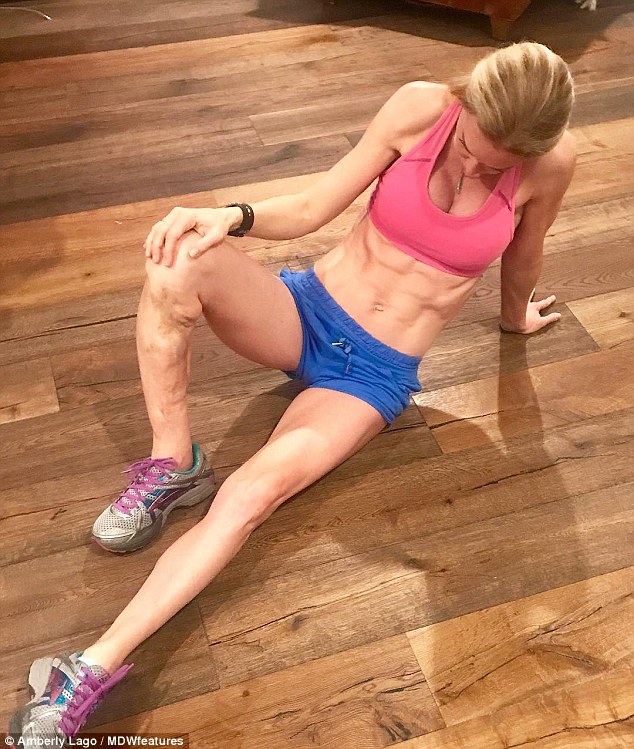 Lago was also diagnosed with Complex Regional Pain Syndrome (CRPS), a rare condition that causes her to skin to feel like it’s burning 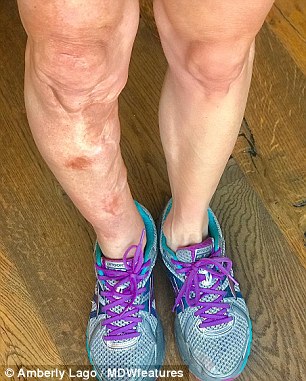 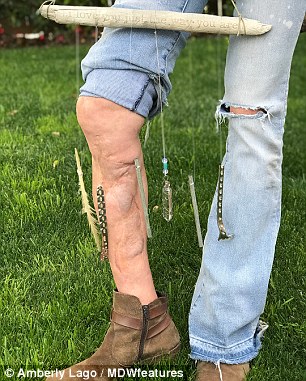 She has undergone multiple treatments including massages, spinal cord stimulation and spinal blocks, which involves narcotics or an anesthetic being injected with a needle, in an attempt to block the pain. Pictured, left and right: the difference between Lago’s legs

There are fewer than 200,000 CRPS patients in the US with the disease affecting two to five percent of people with peripheral nerve injuries.

‘At first I lived in denial and pretended nothing was wrong,’ Lago said.

‘Everything I read about CRPS left me feeling hopeless. Arriving at a place of acceptance was a path through darkness and self-doubt.’

LIVING IN PAIN: WHAT IS CRPS?

The pain is often unconnected to the seriousness of the injury and can be out of all proportion from what the sufferer would expect.

The condition is little-understood, but some medical experts think it is caused by damage to the nervous system, which causes nerves to misfire in some way, triggering pain.

If left untreated the pain can spread to other parts of the body too.

Some sufferers have repeated episodes of pain followed by stretches of pain-free remission.

It can be treated by physiotherapy, to prevent muscle wasting, certain types of painkillers and counselling to help people cope with the chronic pain.

Lago spent three-and-a-half months in the hospital following her accident, undergoing 34 surgeries and having plates and pins inserted into her leg.

During the early phases of her recovery, she said didn’t like showing her leg because it was heavily scarred.

‘My first step was readjusting my attitude towards my leg and learning to love it again despite the fact that it was scarred, didn’t work properly and gave me pain,’ Lago said.

She said she faced discouragement from the medical professionals who treated her.

‘I had one doctor tell me I would probably never wear shorts again because of how my leg looked,’ Lago said.

‘Another doctor said after my thirtieth surgery it would have been better to have just amputated it.’

But she persevered and worked to regain her mobility.

‘It took me four months to stand again and I walked with crutches some of the time and was in a wheelchair the rest of the time,’ she said.

‘I was told I would need to stay in my wheelchair for the rest of my life and would always be disabled.’

After two years, Lago was finally able to no longer rely on a wheelchair, which motivated her to start running again and training at the gym.

She still deals with the effects of CRPS and says she has tried multiple treatments including massages, spinal cord stimulation and spinal blocks, which involves narcotics or an anesthetic being injected with a needle, in an attempt to block the pain 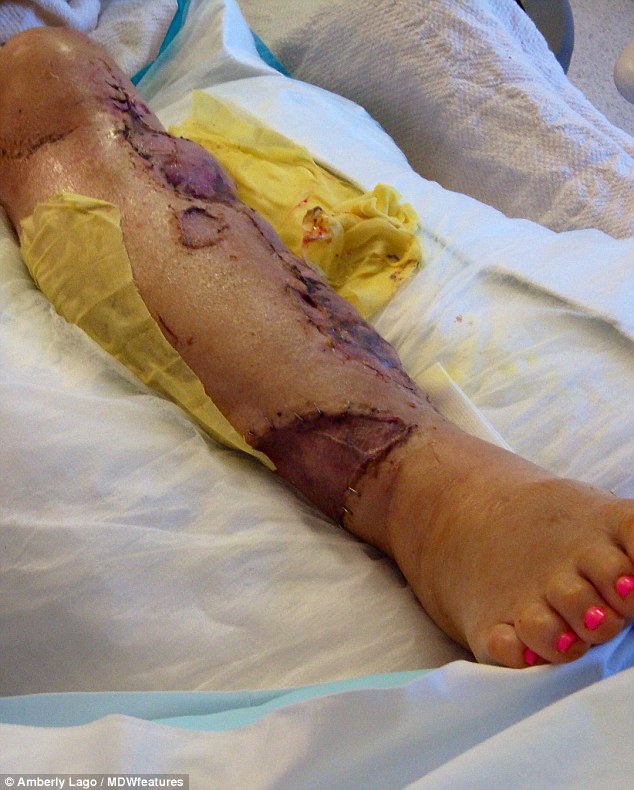 ‘Pretty much anything or anyone who claimed they could get me out pain I was willing to give it a try,’ she said.

Lago is now working as a personal trainer again and has even written a book, True Grit and Grace: Turning Tragedy Into Triumph, about her journey after the accident.

‘Working with people is a gift and has given my life purpose, it pulled me out of depression. I have a different mindset now because helping others is the key to happiness,’ she said.

‘My story illustrates the possibility of enjoying life despite living with chronic pain, I encourage everyone to start where they are, be grateful for what they have and be gentle to themselves.’